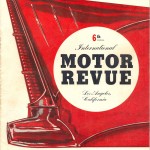 The Bangert Manta Ray Made Its First Public Appearance At The Petersen Motorama in November 1955. What A Show That Must Have Been!

Specials are coming out of the woodwork!  Every where you look in the 50’s, more and more were presenting themselves for admiration and sale.  And Noel Bangert’s cars were no exception.

Noel came out with his first car called the “Stag” in 1954.  Click here to read more about this car.  During interviews with Noel from 2007 thru 2009, Noel described how he “added to” and modified the Stag to produce his second car – the Manta Ray.

And what a fantastic design this was to behold.  The Bangert “Manta Ray” debuted in the summer of ’55 and months later made its first appearance in the November 1955 Petersen Motorama to great acclaim.  The world was Noel’s oyster, and his third and final model was just about a year away from being released.  In the summer of ’55 when this article came out in Road & Track, everything seemed possible for Noel and his company.

Let’s see what John Bond had to say about this very special car and extraordinary designer too. 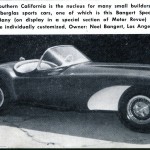 Caption From The ’55 Motorama Program: Southern California is the nucleus for many small builders of Fiberglas sports cars, one of which is this Bangert Special. Many (on display in a special section of Motor Revue) can be individually customized. Owner: Noel Bangert, Los Angeles.

Special of the Month

In line with the wish to provide our readers who are interested in specials with the latest products that are available, attractive, and relatively inexpensive, we present the Bangert Special.

This new fiberglass body adaptable for sports or competition use, is being manufactured by Bangert Enterprises, 3515 Cahuenga Blvd., North Hollywood, California and may be ordered in various stages of completion starting with the bare body shell, depending on the customer’s own ideas and budget.

The shell is, of course, exceptionally light, weighing only 125 lbs with structural reinforcements and mounting brackets included.  The extended wheel cutout areas lend the body its sweeping lines, but, more important, they permit the use of a wide variation of wheelbase measurements ranging from 96 to 104 inches. 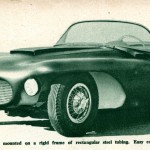 By a simple sectioning operation a wheelbase as short as 90 inches may be used, which means the body can be readily mounted on an MG chassis (94 inches).

Ordinarily a special frame is used made of 2” x 3” rectangular steel tubing; suspension consists of prewar Ford components, but the transverse spring in the rear is split and the frame runs under the axle.  The body will also fit easily on the Kurtis 500 K (or KK) chassis.  Lincoln Bendix brakes with 12 inch drums assure ample stopping power.

As pictured on this page, the Bangert special is dressed in “boulevard trim”, with Chrysler Imperial taillights, Corvette windshield and clip-on wire wheels.  Wheelbase is 100 inches, weight is stated to be just under 2000 lbs.

For the track, however, the frills can be removed in a hurry; a Ferrari-type racing screen replaces the windshield, a head-rest can be installed behind the driver and cooling openings can be made behind the front wheels, a la 300 SL.  Add  to this setup a ’55 Cadillac engine (placed well back for good weight distribution), and the car becomes an exciting dual-purpose machine.

Price of the body shell only is $495; beyond that, suit your own resources. 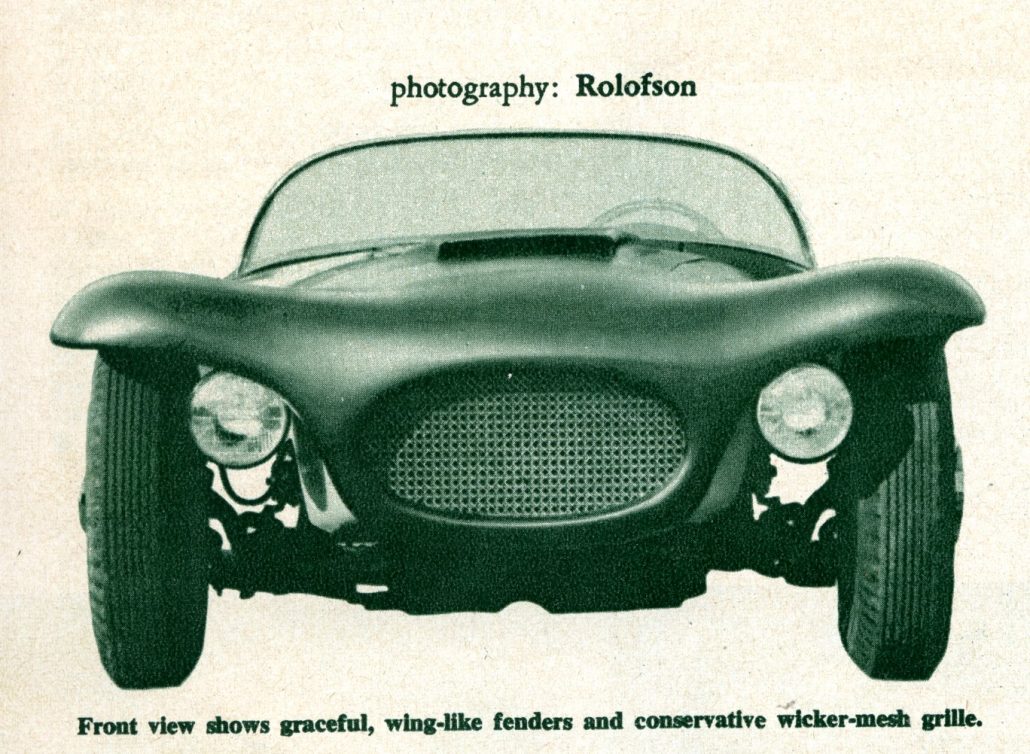 This Is My Favorite View of Bangert’s Manta Ray. It Looks Like It’s Going To Eat You For Lunch. It’s Probably The Closest You Could Get To Driving A Motorama Concept Car Of Your Own – Back In The ’50s.

During our interviews, Noel shared with me that this was his personal car.  What better way to advertise your own car than driving it and bringing it to shows across Southern California.  So far only 4 Bangert Manta Ray sports cars have been found out of an estimated 15-20 that were built.

Will you be the next Bangert Manta Ray owner?  Rick D’Louhy and I hope so….so keep us posted on what you find gang!