I first came across a reference to this car in the October 1953 issue of Mechanix Illustrated.  In this issue was a picture of a happy guy (Major Disbrow) in his newly built Glasspar sports car.  Here’s what the caption said:

“Sports car built by Major Bill L. DIsbrow, USAF, Panama City, Florida, has a Mercury engine fitted with three carburetors.  Body is made of fiberglass and is mounted on a 1932 Ford chassis. Claims speed of 100 mph.”

Pretty cool car.  But in looking at the picture, Major Disbrow was not a typical sports car builder for the time – he  was a bit older.  Maybe in his 30’s – perhaps in his early 40’s.  That meant two things….first the car built was probably extraordinary.  Bill Disbrow had the knowledge and resources to build an excellent sports car on par with any special or sports car in its day (perhaps even better).  And two…being that the article was published in 1953, the builder – Bill Disbrow – would most likely no longer be with us. 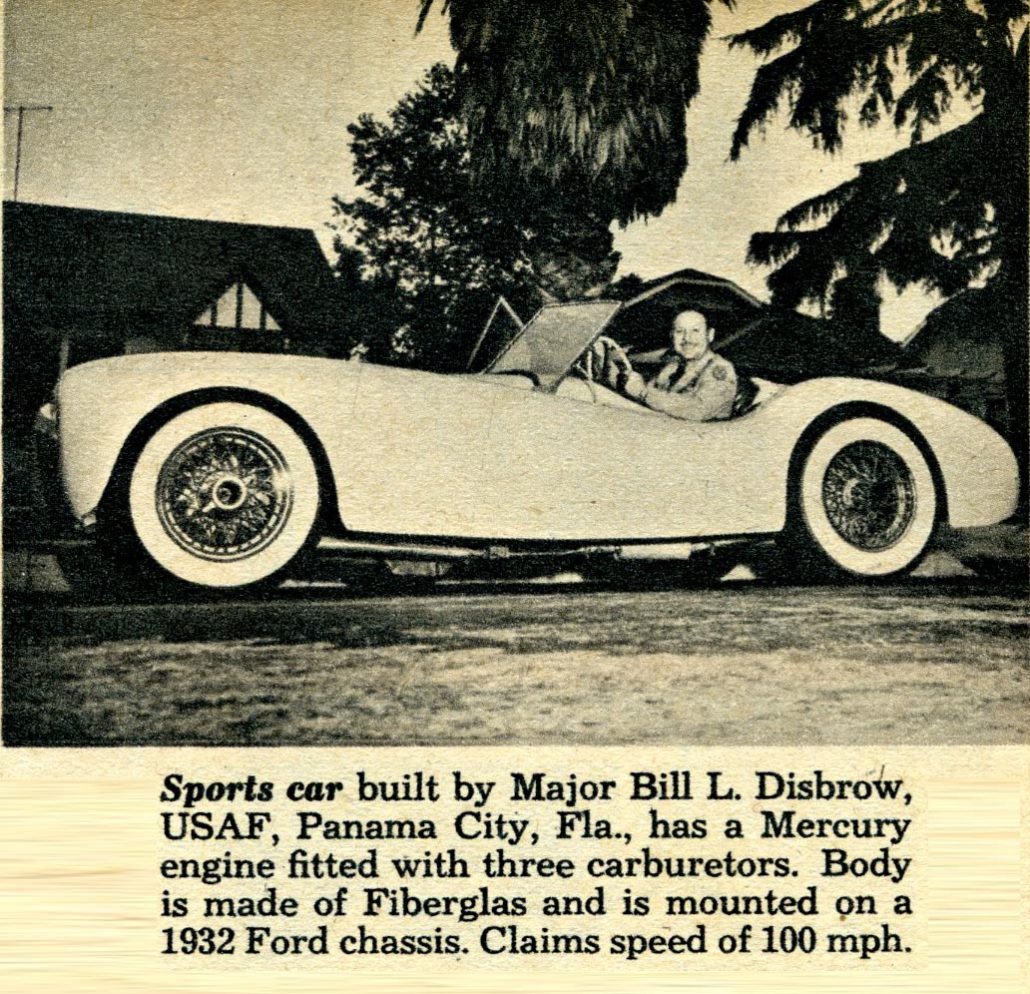 I first started to search for his family, given that I assumed Bill would no longer be with us.  But I couldn’t find them.  And very quickly, I began finding articles about Bill Disbrow.  The first one I found was published in 2006 when Bill was just 90 years old and it showed him not only dancing at one of his weekly outings but discussed how he was an avid snow skier too – in competition for his age group.  You can read more about Bill Disbrow in the article here:

Age group!  I have a hard enough time at age 48 getting out of bed each morning and negotiating the stairs in my desperate morning ritual that involves my search for a cup of coffee.  Ah…the joys of bachelorhood.  So… the article was published in 2006, but where was Bill now?  Was he still with us?

Further searching produced a book he wrote about his life in 2005 called “On The Edge.”  What intriguing possibilities there were but I still had to find Bill.  I really started to focus in and try and find out what happened to him – after all it had been several years since anything was published on the Internet about Bill.  So I kept my fingers crossed and stepped up the search.

Finally, I found a phone number for him and called it – and heard his voice on a message.  I left a message about my research and his car and hoped for the best.  Minutes later I got a call – and it was Bill!  He had heard the phone ring but had to pull over to the side of the road before answering.  After all, theres a “cell phone” law in California and 95 year old guys had to obey the law too!

So….it’s with much excitement that I share with you the first of several articles on the Disbrow Glasspar Special.  Bill is an active 95 year old with great memory and pictures of his car and I think you going to love the series of stories about Bill Disbrow and his Glasspar G2 sports car.