Dick Morgensen was a man of many talents.

His first “Morgensen Special” was a Glasspar G2 bodied beauty that debuted in a race at Torrey Pines in December, 1952 – it was certainly one of the first fiberglass sports and race cars of its day.  His next two specials made headlines wherever they raced, and his success continued thru the late 1950’s and beyond.

Today’s article appeared in a magazine published by “Motor Trend” called Sportscar Quarterly.  It’s a magazine that really focused on racing and true to form, they did a superb job of reviewing the newest in the line of Morgensen Specials which wore one of the new stylish Devin bodies.

Dick Morgensen’s newest special won its first race – a race against time – and with its performance potential it is apt to take a few real ones.  Built in less than 30 days, the Corvette-powered sports car ran in competition for the first time March 1-2, 1958 at the Valley of The Sun Raceway at Beardsley, 25 miles northeast of Phoenix, Arizona.

Finishing touches were made Friday night before the race and the car appeared in primer coat.  It took third in the novice event and ninth overall the next day in the main, won by Ritchie Ginther in a two-liter Testa Rossa Ferrari.  In April, Morgensen drove it to another ninth overall in even faster company in Palm Springs.

The car, Morgensen believes, is nowhere near its full potential.  The first two outings have been shakedown runs and bugs are still being eliminated.  It has a potential top speed, he says, of 145 mph and with a faster gear ratio could hit 165, the speed he clocked in his old car, now the Balchowsky Special, at Palm Springs.

It should turn, he figures, at least 115 mph on the dragstrip in the standing quarter-mile.  Morgensen, Phoenix Porsche-VW dealer, estimates that he has about $2,000 less labor in the car, the third he has built.  The first was a Cadillac powered Glasspar which he raced for the first time in 1952 at Torrey Pints.  The second, now Balchowsky’s Beast, appeared in 1954 and has given the more expensive imported machinery a run ever since.

From its initial outings, the current Devin-bodied beauty could do the same.

Morgensen was a pioneer in fiberglass sports / race cars and as you can tell from the article, he was poised for excellence with his newest Devin bodied ride.  Perhaps one of you out there know “the rest of the story” and will post additional information on how this Devin did.  If so, I know inquiring minds would enjoy your shared thoughts and history.

5/27/2011: Note:  Avid auto historian Glenn Brummer found the following additional detail covering the racing results history of all Morgensen Specials on one web page.  Click here to review these results.  Thanks very much to Glenn for forwarding us this information. 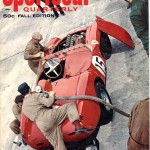 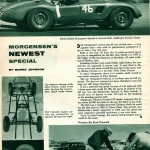 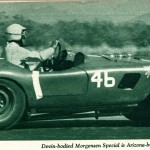 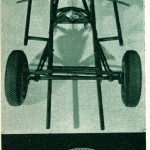 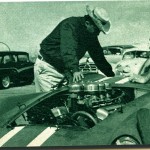 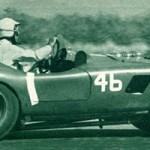