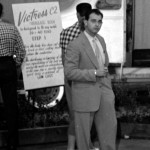 Young, 24-Year Old Merrill Powell Shown Here at The Petersen Motorama in November 1954. Merrill Was Co-Owner of Victress From 1952-1961.

How many Victress Models were there???  Let me count the ways….

When I first met Merrill Powell (co-owner of Victress from 1953-1961) back in 2006, we spent a lot of time reviewing the history and models that they produced, and some of the special projects their organization completed including government work on military projects and the three story tall Olympic rings for the 1960 event in Squaw Valley, USA.  Very impressive list of work for any company during its tenure.

And of course we reviewed each of the cars in detail, and Bill Quirk (Production Manager for Victress from 1952-1961) contributed a vast amount information too.  Thanks again to both Merrill and Bill for their past and current support 🙂

But how many different models of cars did Victress make?  What prototypes did they make?  Where happened to these cars?  I’m still researching the answers to these questions at this time, but for today, how about talking about the Victress C2 that almost was. 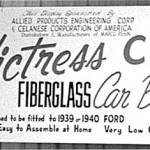 Here’s what’s shown on the Victress Sign: This Display Sponsored By Allied Products Engineering Corporation and Celanese Corporation of America. Distributors of Marco Resin. This is the NEW Victress C2 Fiberglass Car Body. Designed to be fitted to 1939 or 1940 Ford Easy to Assemble at Home. Very Low Cost!

I’m still collecting photos from across the country concerning fiberglass cars from the 1950’s.  Most recently, Leslie Kendall, Curator of the Petersen Museum made three photos available to me that were from the 1954 Petersen Motorama and showcased an unusual display by Victress.  While I had heard of the display and the car from Merrill Powell, I never thought I would see pictures of it.  Boy was I surprised – the pictures were much better than anything I had imagined, and great thanks must go to Leslie for allowing us to share these photos on our Forgotten Fiberglass website for review.

Merrill Powell had first told me about the car back in 2007, and didn’t remember it too favorably.  He mentioned that it was an old look or design at a time when people were looking for fresh designs.  However, when I saw the pictures, I thought Doc Boyce-Smith might just have been ahead of his time.  The car was based on a customer purchasing a 1939-1940 Ford and removing the coupe body, hood, and deck/trunk.  In place of the removed parts would go the Victress body inserts.  It was really a clever idea, keeping even more from the donor car that other companies at the time who were keeping the frame and drivetrain (but still modifying the frame too).

The three pictures provided by Leslie show the steps in making the car – and a close to finished product.  I’m ready to make that car now, and several of our “fiberglass friends” who I’ve showed pictures to agree.  It was a “retro” car before it’s time (1954).  You’ll also note a young, 24 year old Merrill Powell in suit and tie in two of the pictures.  He’s shown standing in back of the nearly assembled car in one picture and near the main floor sign in another.  What fun it would have been to be there. 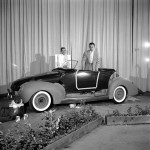 For those of you who like to hear Merrill Powell’s thoughts on this car, click on the triangle below to listen to an 8 minute interview with Merrill and his thoughts concerning the “Lost C2 Victress”:

Where Did The Design Come From?

I asked both Merrill Powell and Bill Quirk where the idea to build the car (design) come from, and both pointed to one possibility.  Doc Boyce-Smith drove a 1940 Ford Pick-up as his main transportation – and loved the design.  It was painted a satin black and was a vehicle he particularly favored.  Both Merrill and Bill thought that Doc’s appreciation for the truck influenced his focus on this design.

I have a different idea…. 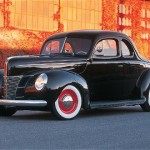 Back around 1951, a custom built (also called “coachbuilt) sports car was being finished after about 10 years of on again /off again work.  It was called the “Coachcraft Special” (currently it goes under the name Yankee Doodle – a much less appealing name to me than it’s actual heritage).  The “Coachcraft Special” was started by Seward Allen in late 1940, worked on by the builders at Coachcraft in Los Angeles, purchased by Jimmy Summers Hollywood Custom car builder and customizer, and later acquired by Ted Johnson, a garage owner, machinist, and hot rod enthusiast in still incomplete condition.  Ted Johnson lived and worked in North Hollywood – very close to Victress Manufactering.

Ted began to finish much of the work, and called on Coachcraft again to perform the finishing touches.   Final paint and upholstery were finished in Hollywood, and when completed in 1952, it was shown at the Petersen Motorama and was a prizewinner in every way.

Victress was located in North Hollywood, and all of the work in the early 1950’s was completed on the Coachcraft Special in the Hollywood and North Hollywood area.   This is where both Ted Johnson and Doc Boyce-Smith lived and worked.  No doubt, Doc had seen this car many times perhaps even starting earlier than 1952, and by 1954 when Victress was expanding, he may have wanted to take his appreciation of the car to the design boards and make it a reality in fiberglass. 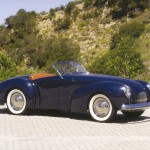 Just my thoughts gang, but it’s an interesting angle to consider.  The entire article on the Coachcraft Special appears below.

It’s unknown whether or not Doc finished his dream of completing the first Victress C2 beyond the mock-up stage shown at the Petersen Motorama in 1954.  And the Victress C2 name would be quickly given to Merrill Powell’s original design of the first Victress Coupe – soon to emerge in early to mid 1955 (the 94 inch wheelbase C2  body came out about 6 months before the larger approximately 100” wheelbase C3).

No one knows what happened to the car and its components after the Petersen Motorama, and without the pictures shared by Leslie Kendall, Curator of the Petersen Museum, this wonderful prototype would have been lost forever, save the few memories of our Victress friends from so long ago.

So…..start looking out there gang for a lost Victress.  One that is remarkable well designed for a 1940’s style custom…just 50 years ahead of its time…and 10 years behind the time when it debuted in 1954.

Here’s what’s shown on the Victress Sign: This Display Sponsored By Allied Products Engineering Corporation and Celanese Corporation of America. Distributors of Marco Resin. This is the NEW Victress C2 Fiberglass Car Body 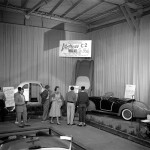 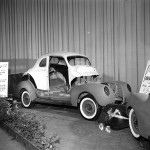 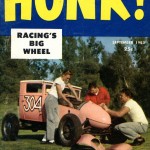 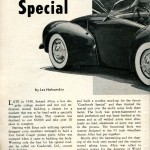 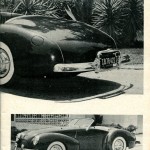 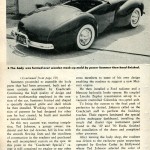 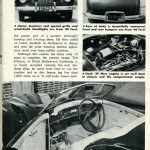 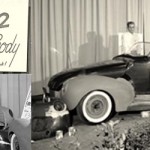