This is the first in a series of short articles about the introduction of the Kaiser Darrin sports car.  I’ve been fortunate to be working with a great team on researching the early history of this car including:

The reason this is significant is that the Darrin sports car was the first automobile manufacturer to announce definitive plans on producing an American Sports car in volume – and it was in fiberglass to boot!  The Corvette made it to the marketplace in volume in late 1953 before the Darrins started to arrive in dealerships in 1954, but the announcement is key – and the Kaiser Darrin gets to wear the crown on having this achievement.

So let’s take a look at the initial announcement concerning the car from early 1953:

K-F stands today as the first automobile manufacturer to announce definite plans for volume production of an American sports car.   The body of the car will be made of the new lightweight, durable material – reinforced fiber glass.

Edgar F. Kaiser, president, said the K-F sports model, designated the DKF-161, is scheduled for volume production in July.  Designed by Howard A. Darrin, K-F styling consultant and internationally known custom car builder, the DKF-161 will have many entirely new features, such as sliding doors for ease of exit and entry and distinctive safety innovations, Mr. Kaiser said.

He originally disclosed last September that K-F was developing sports car bodies using polyester resins combined with fiberglass.  At that time, he outlined tentative plans to build approximately 1000 of the Darrin designed models to “determine the national sales potential of an American-built European-type sports car.”

The decision to go into volume production of the new sports car was based on market tests made in several key cities which indicated a tremendous growth of public interest in sports models, Mr. Kaiser explained.

Specifications and price of the sports car will be announced at a later date.

The ability to accelerate from 10 to 70 miles per hour in high gear in 15 seconds is one of the outstanding features of K-F’s sensational new reinforced fiberglass sports car, it has been disclosed by T. A. Bedford, vice president and general manager of the Automotive Division.

The new sports car, scheduled for volume production in July, will be powered by a new six-cylinder engine with a high compression head and multiple carburetion, Bedford said.  The new car will boast a ratio of only 22 pounds of car weight per horsepower. 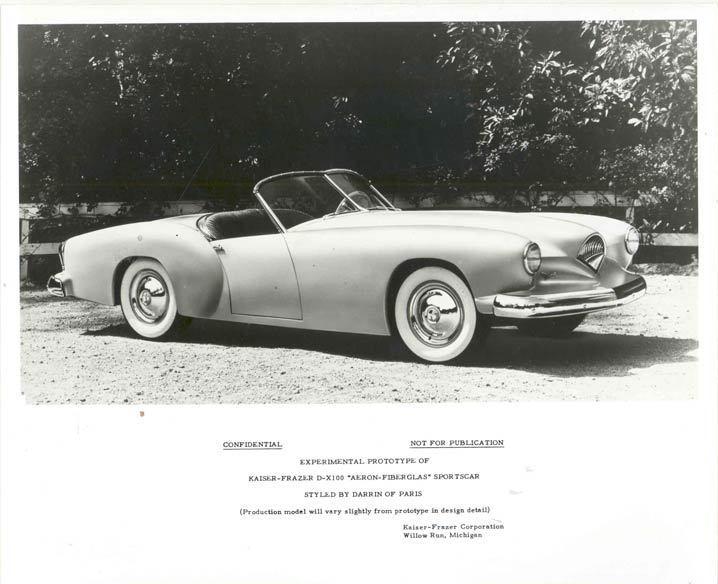 Bedford said the sports car, designated as the DKF-161, has a lower center of gravity than any other American built car and its cowl is only 36 inches above the ground.  Despite its low silhouette, the car has standard road clearance.  The low-wide dimensions of the DKF-161 give it the ability to take sharp curves without sway or roll.

“These contours, combined with an overall length of 183.5 inches, give the DKF-161 a sleek, new beauty of line not found on the most expensive European made sports cars,” Bedford stated.

The new model will have two additional unique features to satisfy the desires of the most demanding sports car enthusiasts.  It will be equipped with newly developed sliding doors and an all-weather top so designed that it can be completely concealed under the deck lid.

Bedford said K-F would offer the sports car in a full complement of new colors and custom styled interiors.  Wire wheels will be optional equipment.

So….what’s the most important “take-away” from this Kaiser-Frazer newsletter?  It’s the first sentence of their first official article about the car.  Let me repeat it here for you:

“Kaiser-Frazer stands today as the first automobile manufacturer to announce definite plans for volume production of an American sports car.”

Not a bad accolade to stand behind, is it gang?

While the newsletter’s ambition was great, Kaiser Darrin sports cars actually started getting to dealers in early 1954 – a few months after the Corvette was in limited supplies to the American public – but it was available to them, nonetheless.  Kaiser-Frazer still wins, though, on the announcement of America’s first production sports car, and good for them in every way.  It’s a very special sports car – and they were a special company to have achieved this recognition.

More about the debut of the Kaiser Darrin sports cars in future stories here at Forgotten Fiberglass. 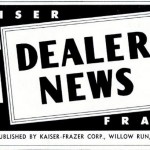 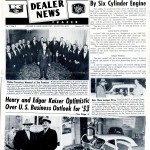 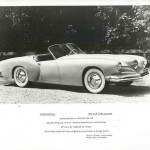 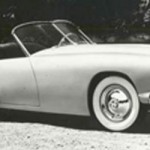