We are blessed with so many people participating in the research here at Forgotten Fiberglass.  One of those folks that we salute today is Alden Jewell.  Today’s article comes from the dimensional “know-no-limits” archives that he has been building for more than a half century. 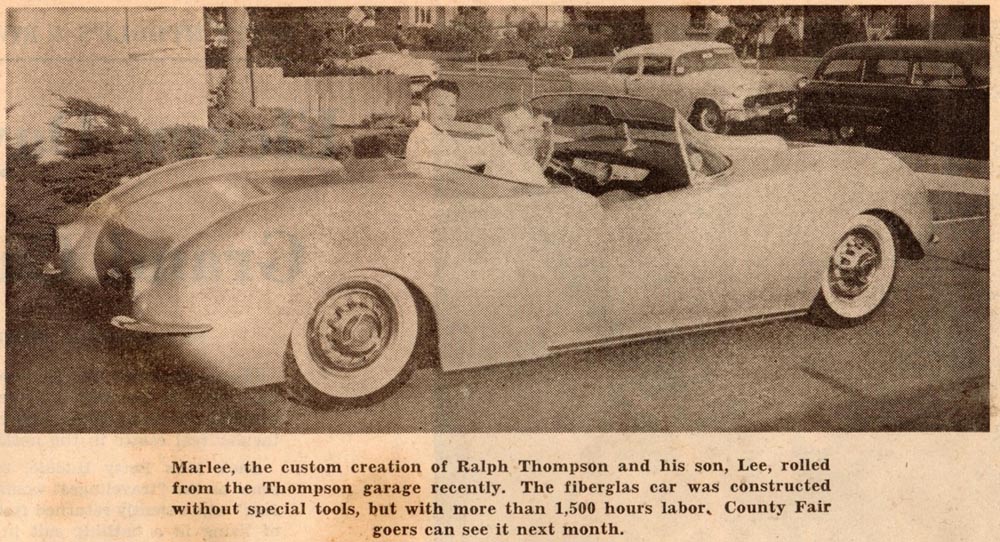 After laboring some 1560 hours in their spare time over a three year period, Ralph Thompson, 2345 Cory Avenue, and his 31 year old Lee proudly unveiled their sleek fiberglass custom auto body recently.  “We started from scratch with our own scale model as we wanted to come up with a completely different design,” Ralph explained.

“It was Lee’s idea and determination which carried us through on the project.  He’s artistic and he drew the design.  At the time we started the project, there was a great deal of talk about fiberglass bodies, so we thought we would give it a whirl in spite of the fact we had never before tried anything like this.”

“We got some ideas from a reference model manual published on Modern Plastics by Motor Trend, and we also received considerable help from Peterson Products in San Mateo.”

Ralph and Lee started with a large graph divided in five inch squares on their garage door.  They needed 800 pounds of plaster for a mold.  The form was made of wood and wire mesh. No special tools were required, as they improvised with contour tools.

They had to shorten a 1946 Ford frame fore and aft, and put the gas tank under the deck.  They lowered the fan assembly and radiator of a 1948 Mercury engine to accommodate the body.  They built their own 16 inch steering wheel.

“We did the entire job in my garage averaging about 10 hours work per week,” Ralph said.  “Fortunately our wives didn’t mind.  Our expenses ran about $2000, but it could have been done much cheaper.  We did a lot of experimenting because we wanted to come up with a new concept.”

I would recommend this as a splendid hobby for a father and son.  I think fathers should help their sons in such project.  They would get to know their childfen much better if they spent a little time with them.”

The car, which was painted with silver chrome Lucite by Peter Varnaci, is called “Marlee”, and not without reason.  The name was derived by taking the initials of Mary, Ralph’s wife; Ann, Lee’s wife and Ralph, plus Lee’s full first name.

Plans now call for the Marlee to be shown at the County Fair next month, and Ralph says they may build another body if the public responds favorably to their creation.

Based on what was shared in the article – the “Modern Plastics” published by Motor Trend was published in 1954 –  we know that the earliest the car could have been built is 1954, and was most likely finished in 1955/1956.

So…where is the car today?  The Thompson family must consider the project a “legend” in their family history, and have retained the “build” pictures and maybe even the car.  Anyone want to help find them and see what they have?  Hopefully they will be willing to share information from their family archives.  And of course…you may also find more than you bargained for which includes one very special, wonderfully built, piece of Americana long forgotten – the Marlee Sports Car.  What a wonderful thing to be part of the team that would bring that car back for all to enjoy.

Thanks again to Alden Jewell for saving this article back around 1955 and holding it for us and our Forgotten Fiberglass group for over 50 years.  Way to go Alden! 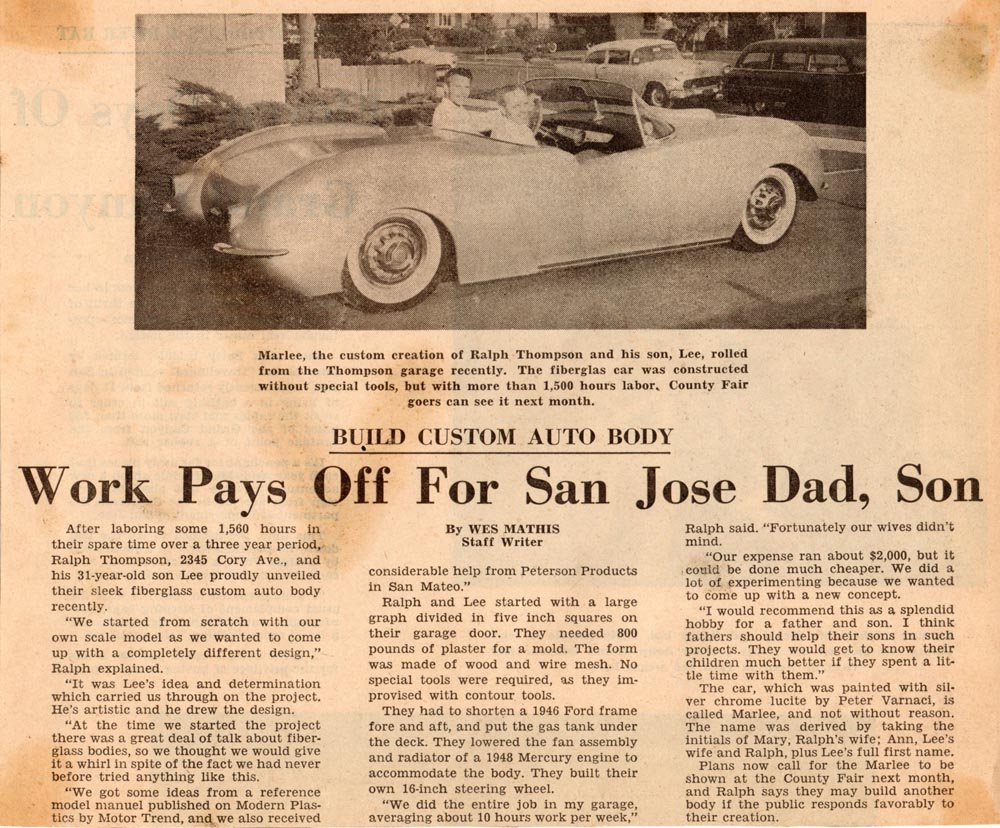