Today I’m honored to share an article by our friend and intrepid “historian-adventurer” Bob Cunningham.  Bob has always had an affinity for small cars, lost marques and their history.  Today’s article is about a car that both Bob and I have studied – the Lahti Special.  It’s a one-off with a great personal story – one that Bob relates perfectly.  So let’s go and take it away Bob 🙂

The Rise of the 1959 Lahti Special

In 1958, Michigan brothers Ahde and Aleksis Lahti approached their father with a typical teenager’s request:

Their hearts were set on a Chevrolet.  “You have a car here,” their dad replied. The boys’ father and uncle had recently abandoned their dream of building a sports car. “You just need a body.”  On a narrow strip of grass between the driveway and a large homemade boat rested the remnants of a Crosley Hotshot, including a bare frame and an engine equipped with dual carburetors, Braje manifolds and finned valve cover. 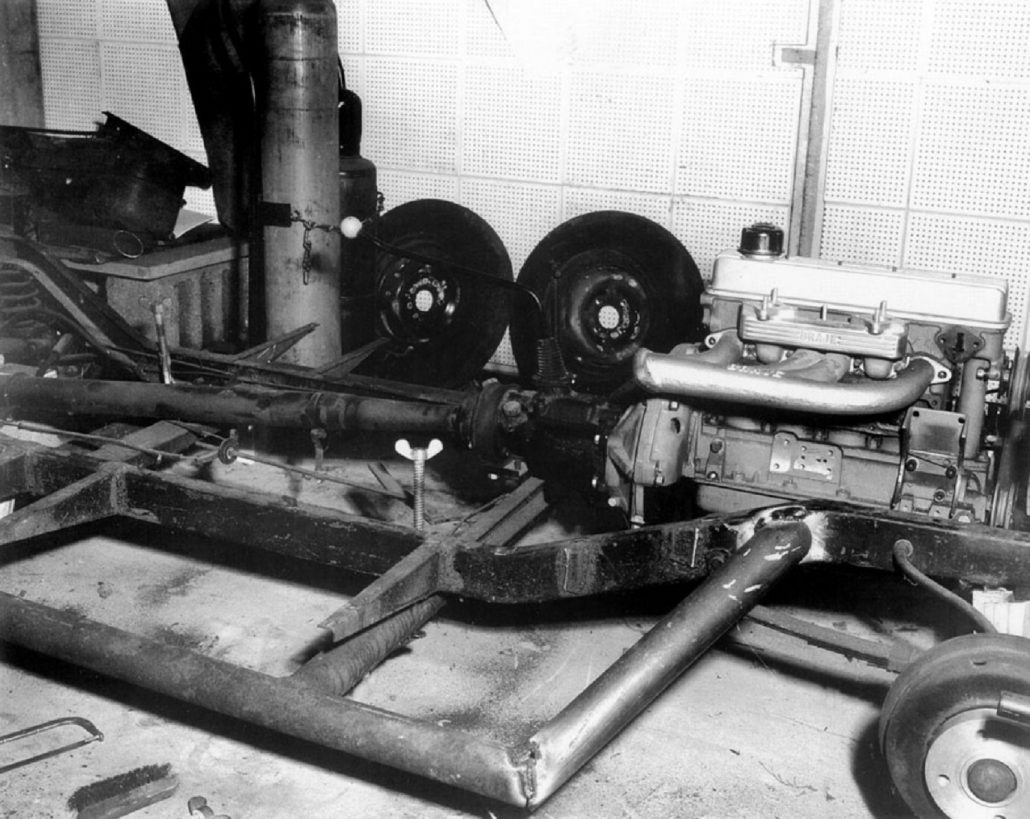 You can see where Aleksis and Ahde added an outrigger structure to the frame for strengthening and support of the wider car body they were going to build.

Both boys were eager to tackle the project but lacked mechanical experience. Aleksis was a freshman at the University of Michigan studying art, and Ahde was still in high school. “We didn’t know anything about cars,” Ahde recalled. “I picked up what I thought was the generator and was told it was a starter.” Artistic talent and ingenuity would have to compensate for their mechanical shortcomings. 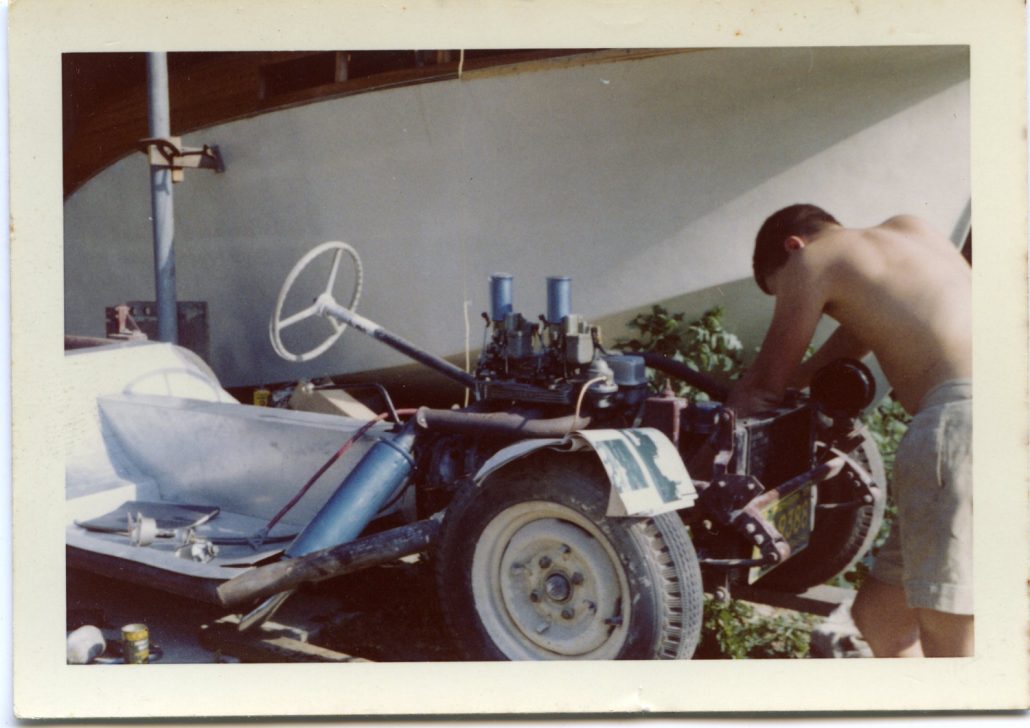 The stock Hotshot had earned a reputation for cornering on two wheels—a tricky maneuver for even the most practiced of drivers. So the Lahti boys lowered the center of gravity by lengthening the chassis and pulling the engine backward and down between the rails. Next, they added one-inch aluminum spacers on each brake drum to spread the narrow tread by two inches. To keep their feet dry on wet pavement, they built a cockpit lining of sheet aluminum and supported it with steel tubing welded to the frame rails. The finished chassis rolled on stock 12-inch Crosley rims fitted with wider balloon tires. 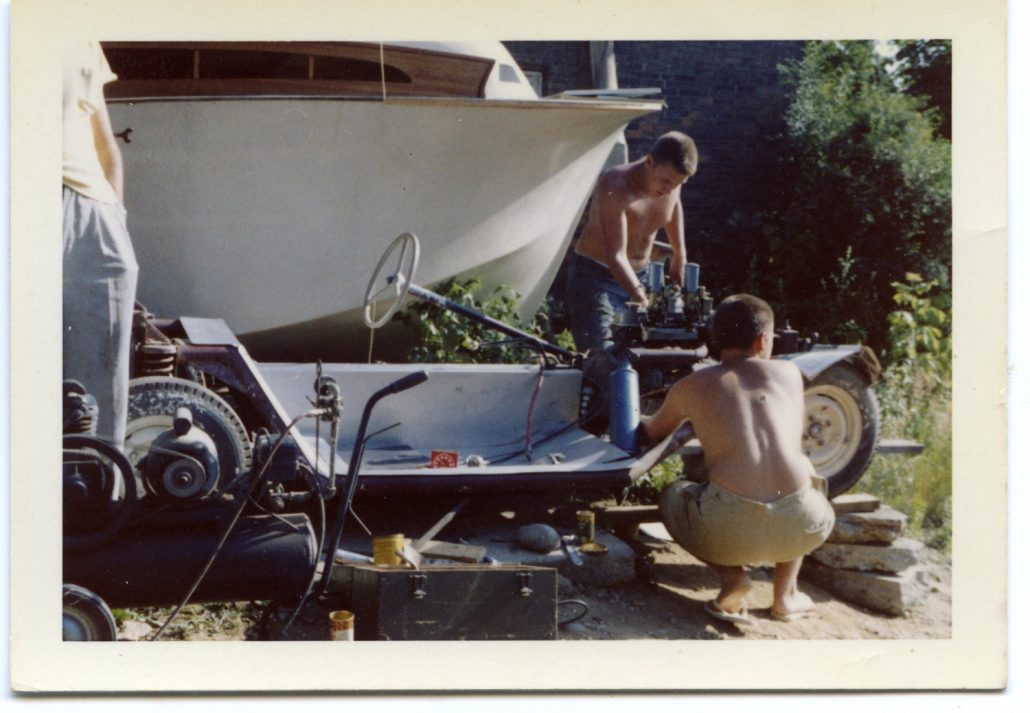 We’re spoiled today by the tools we have at our disposal and the locations of where many of our cars are restored and built. Check out this photo in the shade of a large boat – and the photo below – on where much of the beginning work on the chassis was completed. 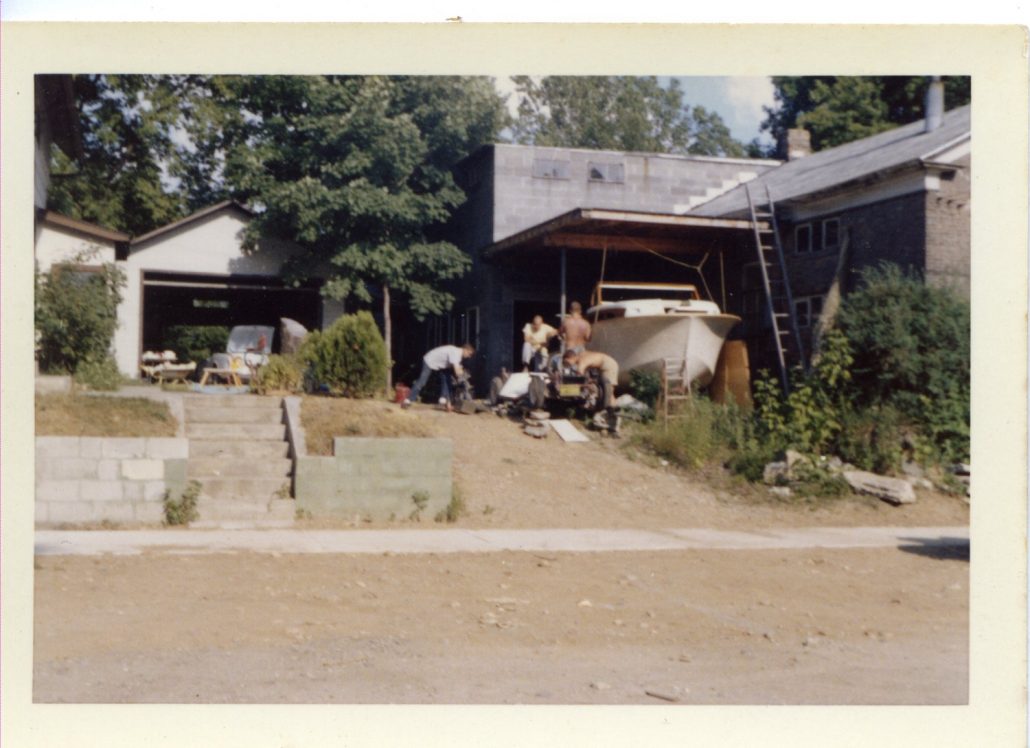 Inspired by the new Lotus Eleven, Aleksis designed a sleek, low-slung roadster with a sloping front end and tall reverse blisters on the front fenders. After constructing a three-piece negative mold of plaster and chicken wire, the boys built the fiberglass body and shaped the firewall using bent electrical conduit topped with weather stripping. Two breather stacks protruded through a small hood, which provided only limited access to the engine. But that was no problem—the body could be easily lifted off after removing three nuts on each side. 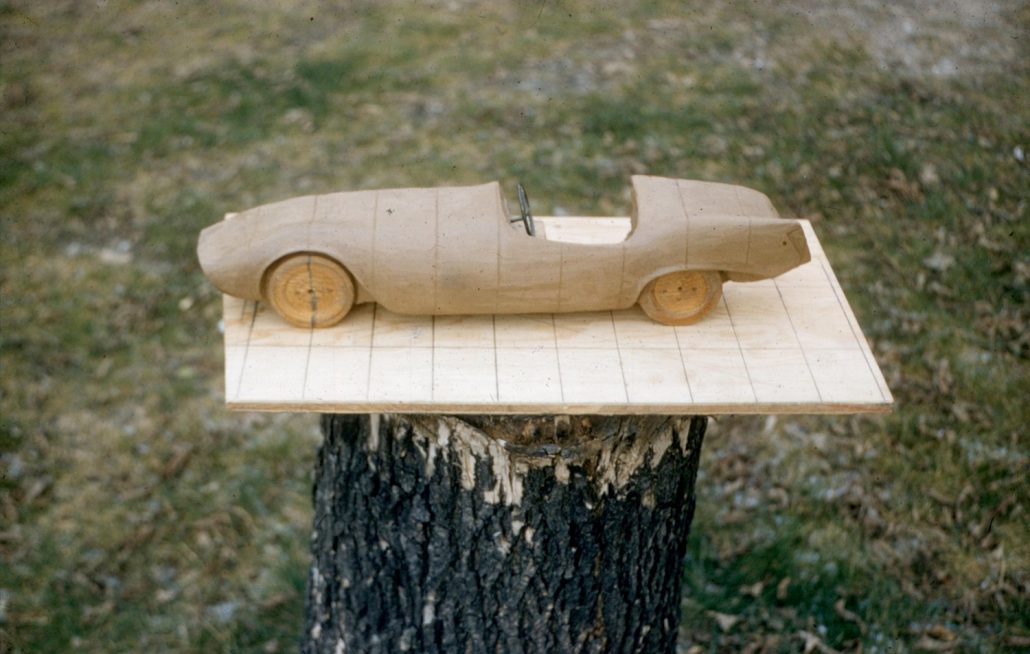 The Lahti boys really planned this car right – and this looks like a wooden model – not a plaster one. Not easy to do! From this point, bulkheads can be measured and the structure of the car can be planned and built. Test Question: Anyone want to answer why only half the model car was built? Knowledgable builders and share their experience in the comments below 🙂

Nine months after they started, the Lahti boys completed their 980-pound, copper-colored midget. The car was modern art on wheels with a body only two feet tall. The boys joked that they could file their fingernails by dragging them on the pavement. Doors were unnecessary but getting behind the wheel required a bit of choreography—stepping over the side with the left foot, swinging the right leg over the steering wheel and sliding down into the seat.

Naturally the speedster had its admirers, and some couldn’t resist sitting in the driver’s seat. One day as Ahde left high school, he found a curious senior girl stuck in the car with no modest way to extract herself while wearing a skirt. Ahde had to lift her out. 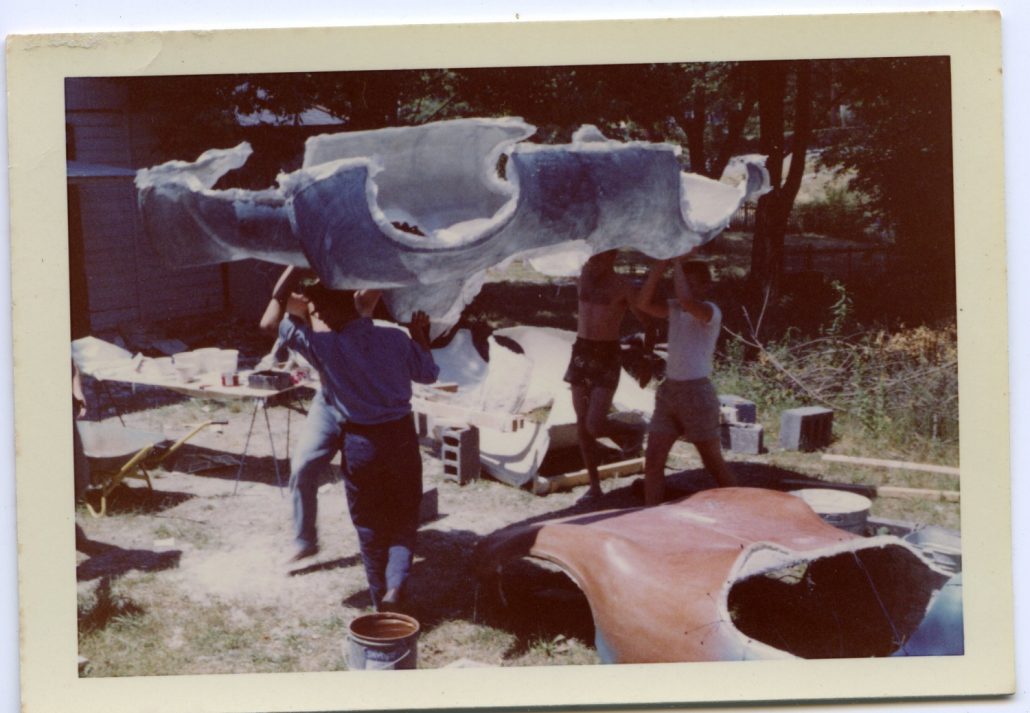 You haven’t truly restored or built a fiberglass special from the 50s unless you and your friends hoist the body and carry it some distance. It’s a rite of passage gang.  Test question gang – is this a male mold or a female mold?  Please answer in comments area below.

Initially, the Lahti Special had no windshield wiper for fear of scratching the curved Plexiglas. But driving in the rain was unlikely since the car also had no top. A simple tonneau cover kept the passenger’s side closed during the winter, and that allowed a gasoline heater to throw a little warmth toward the driver.

The Crosley engine was exhausted through a straight pipe in which randomly spaced washers were strung on a rod to act as baffles. Stomping on the gas pedal often blew the washers out onto the street, leaving “unbelievable power and noise.” As Aleksis hoped, the Lahti Special was able to hug the pavement while skidding around corners, but the Crosley lugs were not up to the task. The boys nearly lost a rear wheel when excess pressure on the lugs broke the brake drum. Their hard driving also broke two crankshafts in four years. Ultimately, the boys replaced the Crosley engine with an 1100cc Fiat power plant rescued from a $125 wreck. 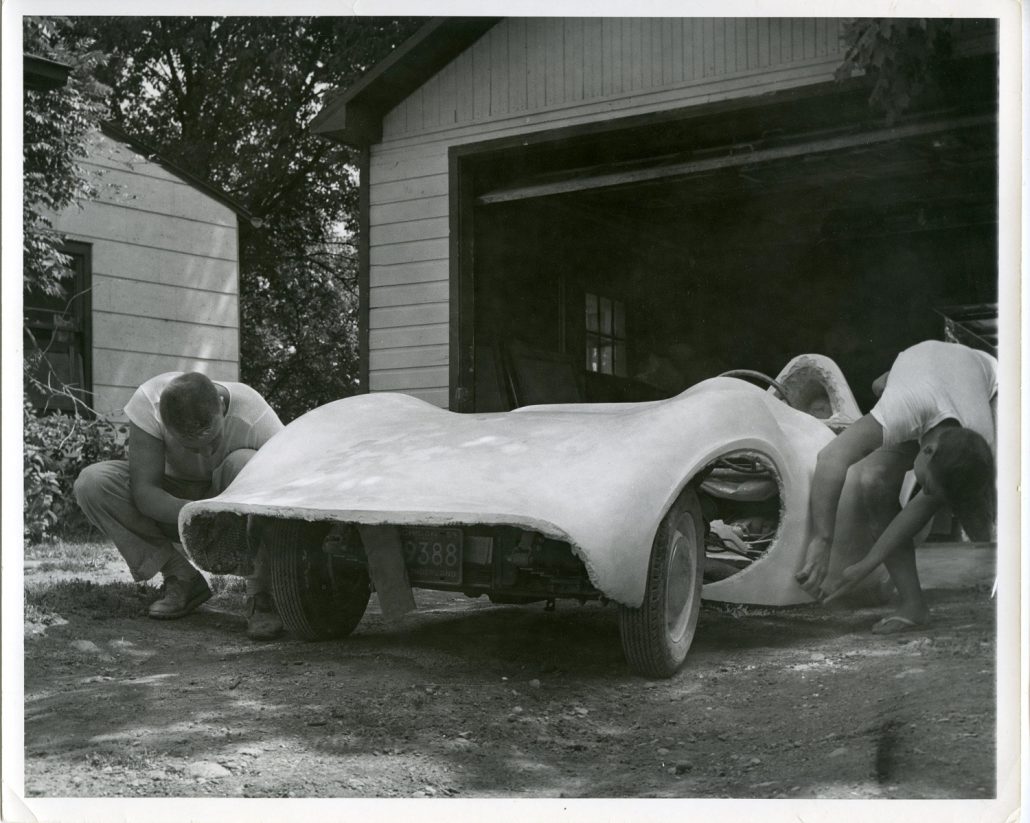 Fitting the freshly pulled body to the newly minted chassis. Man the Lahti Special is low!

The boys hoped their $1,300 investment might pay for itself with winnings from local sports car challenges. Extraneous pieces were quickly detached to lighten the load. For example, the headlights were easily unplugged and removed, and they were generally found rolling around in the passenger compartment.

Their timing was perfect. In 1962, the Sports Car Club of America revised the maximum displacement in the H-Modified class up from 750cc to 850cc, accepting a wide variety of power-plants ranging from outboard marine engines to chain-driven motorcycle engines. Crosley Hotshots and Crosley-powered specials had an enormous influence on sports car development. Driving skills obtained in Crosley-powered racers helped launch the glorious careers of drivers Briggs Cunningham, Bill Spear, Carroll Shelby and others. 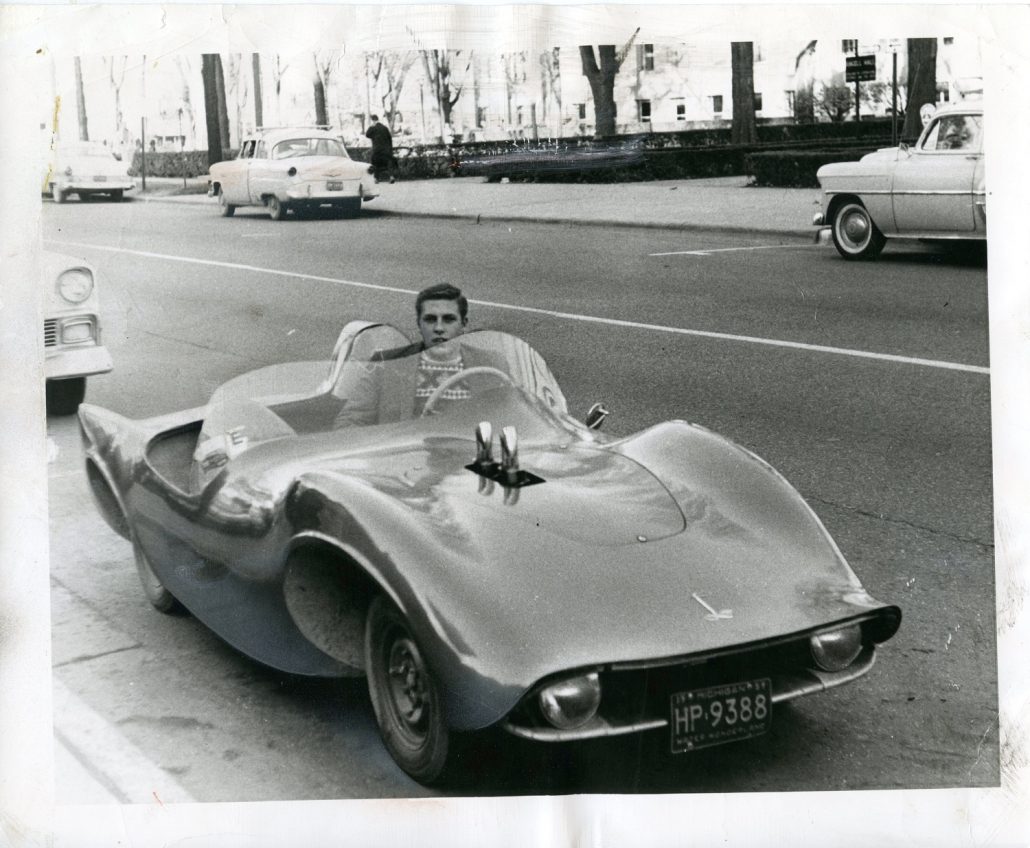 November 18, 1959 – In The Press:  Aleksis and Ahde’s sports car appeared across the nation in newspapers with this photo and caption as follows: “Tinkerer’s Dandy – One year and $1300 ago, Aleksis Lahti, a freshman architecture student at the University of Michigan, began work on his “car of the future,” and today it is carrying him to classes in fine style. Using a Crosley 45 horsepower engine and an original body design, Lahti built the car into an 85 mile an hour speedster. He plans to use the 980 pound midget for sports car rallies.” 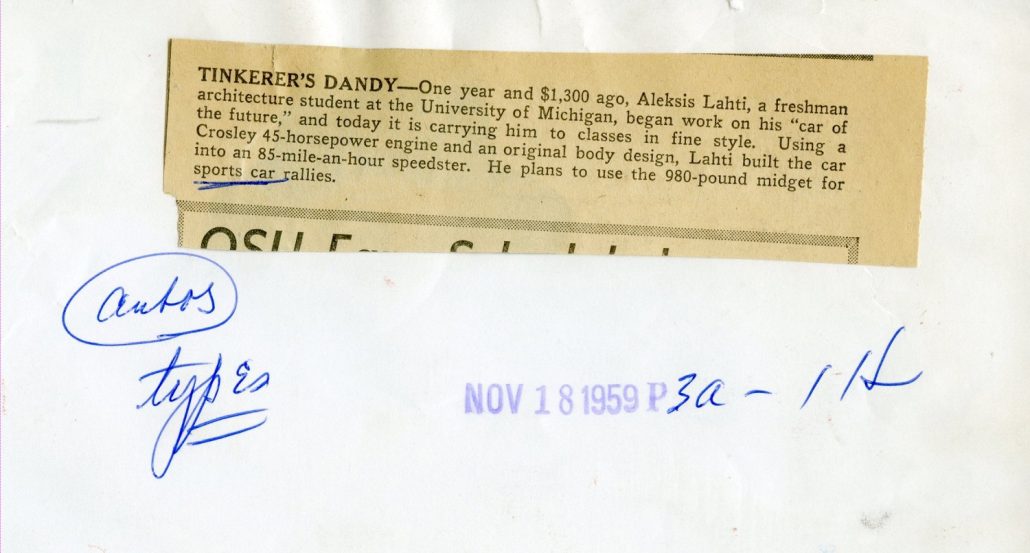 Eventually, as a gesture of appreciation, Aleksis gave the Lahti Special to a friend who had helped in the early design stages. Over time, subsequent owners added various doo-dads that severely altered the car’s sleek profile. Someone added a bulbous hood scoop to cover the protruding engine elements. A second fiberglass headrest was added behind the passenger. Headlights were moved to the fender tops to comply with state regulations and a Nash Metropolitan windshield was grafted to the body.  Unfortunately, the once graceful Lahti Special had morphed into a grotesque caricature.

The little sports car was last seen in 2009 when it was for sale on eBay. Hopefully the car has found a good home and the current owners will be inspired by these earlier photographs to restore its original silhouette. 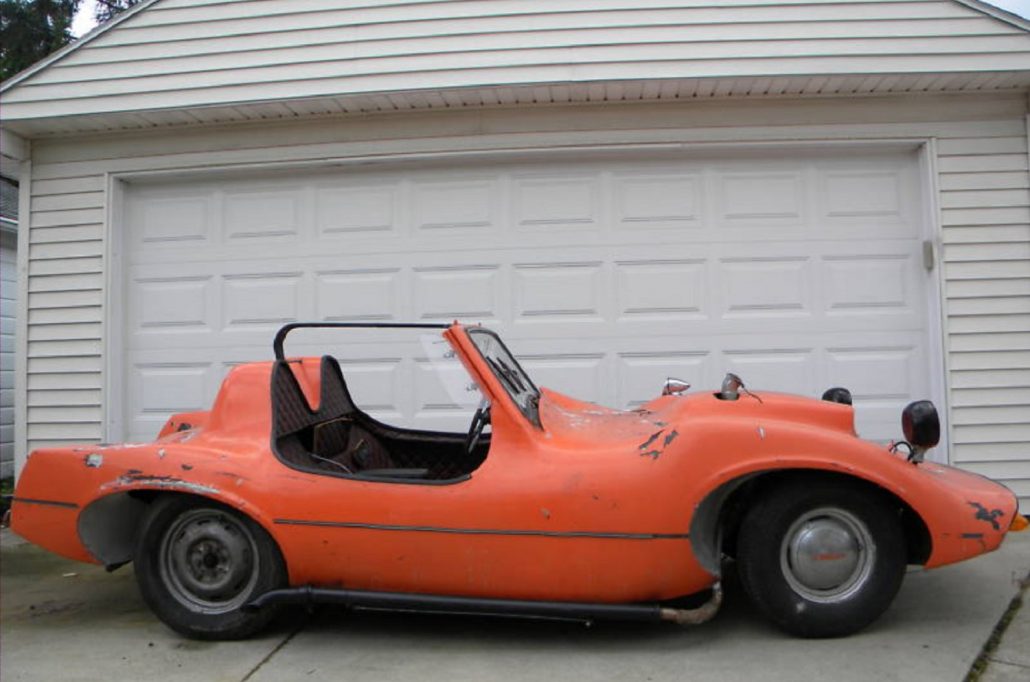 As seen in the Fall of 2009 on eBay – can we find and bring this car home for a restoration at Undiscovered Classics? Finding the car may be up to you? The rest….the energetic team here in Tampa, Florida.