What fun it is to share the fiberglass designs of the Midwest.  Recently, I wrote about the fiberglass cars of the Northeast in a story about the Rockefeller Yankee.  Today’s story focuses on the Detroit born and bred La Saetta.  This is one of a handful of cars designed and built in or near the Midwest which include:

It’s interesting as you review styling of fiberglass cars in the early to mid ‘50s.  As you go from West to East, the styling becomes, typically, more “Detroit-Like,” and that’s probably predictable and would occur for a variety of reasons.  One reason would be to create a car more attuned to the Detroit buying public.  Another might be just the lack of proximity of sports and race cars that would have been intensely in Southern California and not in the Midwest (but they would have been in some numbers in the Northeast..)

In any event, there is a difference as you make the progression from West to East.  And with that, let’s have a look at a nicely designed sports car from Detroit, Michigan called the La Saetta – designed by Gino and Cesare Testaguzza.

An Example, In Fiberglass, of the Italian Influence, Created in Detroit and Fashioned For Performance

Before you get confused, let us point out that you are looking at not one, but two different cars on these pages.  Each, however, is a variation on the same theme – one of 15 cars produced thus far by the Testaguzza brothers in Detroit.

La Saetta (“The Thunderbolt” in Italian) is a long, low roadster of striking appearance and one that possesses many characteristics of the sports car.  It is a dream come true for Cesare and Gino, the brothers, who were born in Italy, but came to the U.S. to work for Ford, Kaiser, Nash, Chrysler, and in styling aircraft before embarking upon the production of this particular vehicle.

The car is a genuine custom, normally built to a customer’s specifications, so generalizations on its details are difficult.  The wheelbase runs about 110 inches, with overall length from 200 to 210.  The price, complete, is in the $3500 bracket, with the fiberglass body alone available for around $1250.  Choices in exterior colors, interior trim, instrument panels and accessories are practically unlimited.

When driven by a Motor Life staffer, times of less than 10 seconds in accelerating from zero to 60 mph were easy in a Hudson Hornet inline six-engined model.  Top speeds of up to 110 mph were no strain.

Handling also was excellent and stepped-up steering permitted turns with less wheel movement.  Since the car is built around a fiberglass body, it requires a rigid frame and chassis.  The layout the Testaguzzas normally use has been a Ford frame cut down to proper size and beefed up.

A stock Ford rear axle and front suspension is used in most cases.  And the car rides quite well, even at low speeds and over rough gravel roads.  Extra bracing at key points for the detachable hardtop keeps rattles to a minimum.

So far, some 15 models have been built of the car and it would be hard to find two that are exactly alike.  Big production is not planned, but many more models of the LaSaetta will be on the road in the near future.

Flexibility in frontal treatment is apparent in the two photos below.  Note variations with wrap-around and vee-type windshields.  The latter probably will prove to be more popular since it can be had with a removable hardtop and, in fact, seems to be better looking.

Height at the cowl is only a little over three feet, which makes the car, even with the detachable hardtop, one you practically, can kneel alongside and still see over.  One car has been fitted with air scoops on its hood.

Two different La Saettas received distinctly different instrument panels.  The one at the extreme left is the latest style and is considered the better of the two.  Also seen is the full bench seat, which is not favored over the bucket-type that permits lower and more secure seating.

Visibility, of course, is superb.  In general, however, details of the cars vary considerably, since the vehicles are custom built to order and to suit personal taste.

Rear end views show contrasting themes in simple deck lid and one equipped with continental tire mount.  Variety in lights also serves to make each car distinctive.  Most of the models have been built on a Ford chassis and are powered by the Olds 88 engine.

However, the car shown here without the hardtop has the Hudson inline engine and has performed remarkably well.  Ride is soft and  there is a slight lean in hard turns, but overall handling qualities surpass most of the current production automobiles.

Approximately 8 La Saettas have been sighted in recent years – one most recently in an auction in California.  We’re still searching for one that has been restored, and as soon as we find one we’ll share it here at Forgotten Fiberglass 🙂 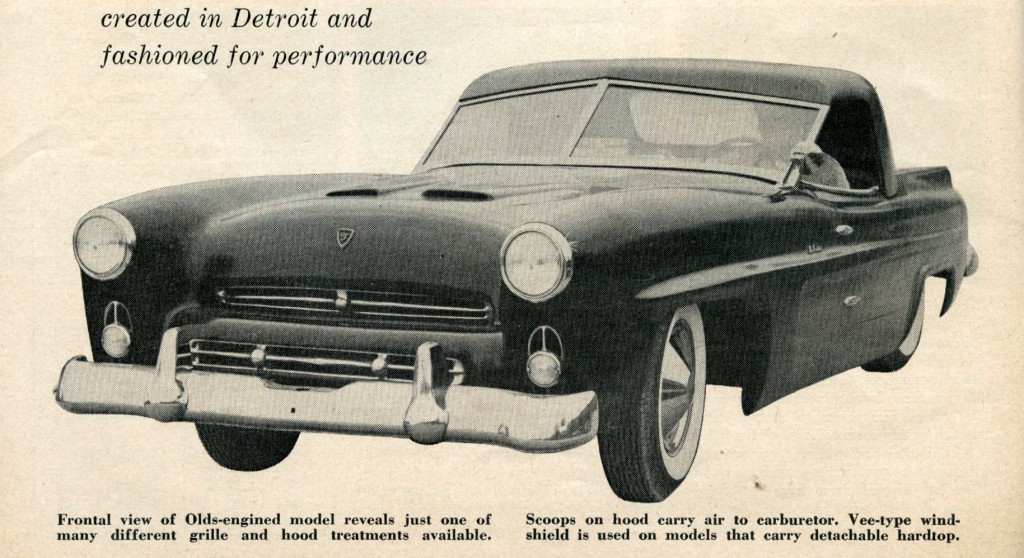 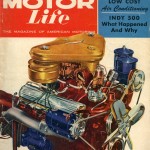 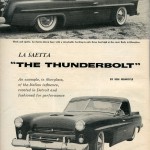 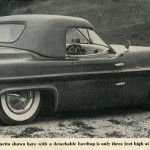 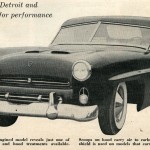 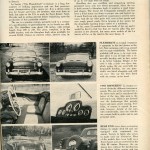 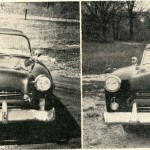 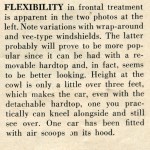 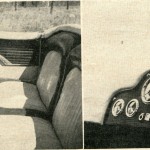 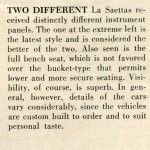 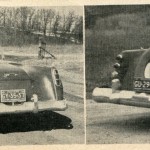 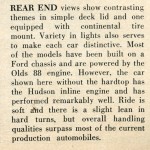 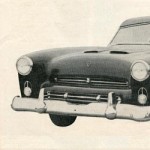