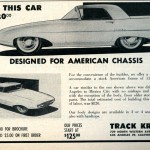 Here’s The Ad that Paul Sable Sent Me. It’s from the May 1960 Issue of Motor Life. Have Any Of You Seen Other Ads or Brochures for This Company?

Paul Sable has been a strong supporter of vintage fiberglass sports cars over the years – and has become a great friend too.  I first met Paul at the Amelia Island Concours d’ Elegance in 2007 when he was judging our class of vintage fiberglass cars.  He was teamed with George Barris and Tim Considine and spent time getting to know each of the participants and their cars.

Paul is both a University Professor and a car historian.  He writes about and collects exotic sports cars focusing on the 1940’s and 1950’s and participates as a judge or chief judge at many Concours d’Elegance events across the country – including the Pebble Beach Concours d’ Elegance.

Paul is truly a gentleman, a scholar, and a “car guy” in every sense of the phrase.

Since 2007, Paul and I have kept in touch about various cars and exchange information frequently.  Recently, he sent me an ad from a company called “Track Kraft” and challenged me to locate more information about it.  Today is the first step in the results of that challenge.

Paul…this story is for you.

Paul sent me tantalizing details in a copy of a magazine.  It was an ad that appeared in the May 1960 issue of Motor Life, and appears above.  Multiple questions started to appear in my head.  Who was this company?  What history did they have?  How many models of cars did they make?  How many cars (if any) did they produce?  Who owned and managed the company?  I started looking for more information about a year ago, when Paul first suggested I find out more about this company.  I promised him I would do what I could.

The Many Models of Track Kraft

I searched where I could and located as much information as possible.  Still no Track Kraft company or any records of people who said they had bought their body at “Track Kraft.”.  The trail seemed to be getting cold.  Finally, luck prevailed, and I located a pristine copy of a Track Kraft brochure.  For those of you interested how and where I found it, click on the following link for a 3 minute video.  Click on the center of the screen where there is a “triangle” to begin.

I checked the mailbox each day eagerly awaiting the arrival of the 12 page brochure.  It was like Christmas – but in July.  When it arrived, I was very surprised what I had found.

In the title of this story I included the statement “Past and Future United”.  What I was referring to was that Track Kraft seems to have purchased or procured at least two older models of fiberglass bodies as their stalwart model of cars.  Namely, the Mistral Sports Car body, and the McCormack fiberglass custom car – both introduced to the American public in 1956.

This was not the first time this occurred.  Les and Joan Dawes from LaDawri Coachcraft had expanded their company in the same way – but they had started with the Conquest, Daytona, and variations of size before adding on purchased body molds from existing older companies (in this case Victress, Savage, and others).  It was an interesting move by Track Kraft – and one that could have been successful. 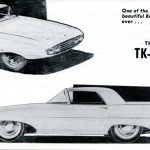 Here are Two Drawings of the TK-101. Nicely Designed Car – Available in 2 or 4 Passenger Sizes. Who Could Ask For More?

According to the brochure, Track Kraft offered 3 models of cars:

TK-101:  This was their lead models, but only drawings were ever shown.  In the ad for their company, they mention that the car on the cover of their brochure was built and driven from Los Angeles to Mexico City without problems.  Interesting, they fail to mention if it made it back.   Rick D’Louhy and I like to see pictures when possible – to confirm that the car body was actually made.  And perhaps we’ll find pictures or an article some day to confirm.

It was an interesting design.  The TK-101 was available in lengths to fit an American chassis (106” or 118”) as either a 2 or 4 seat model.  A hard top was also available.  I’d love to see a finished car – perhaps two cars – one with each wheelbase available.  And they added a bit of embellishment to boot in their review.  Here’s what they said:

“While the TK-101 offers many features, its beauty far exceeds everything else.  Motionless it is an eye catcher  .  In motion, it is beautiful to behold.  Here is your chance to change an older and not very exciting car into a sleek, up to date, convertible or hardtop with little investment.  Older and common place cars get a new and dynamic lease on life when modified and clothed with glamorous new bodywork.”

TK-102 (Mistral Sports Car Body): This is an exact copy of the Mistral sports car body that was introduced by Bud Goodwin to America in 1956.  Bud later went on to create a company called “Sports Car Engineering” which sold the Mistral body under the “Spyder” name.  Bud then went on to create his most famous company – Fiberfab – which continues to operate on the West Coast as of today.

Good friend Erich Schultz from Altadena, California studied the TK-102 in the picture and commented the following: “Geoff…it appears to have been a Jowett Jupiter Special.  The pattern of holes on the wheels match the Jowett perfectly in configuration and number, and the extremely short hood with tall hoodscoop (which is entirely forward of the front wheels) matches the design of the horizonally opposed 4 cylinder engine of the Jowett.  This may help in identifying who built this car and perhaps the driver who is pictured too. I also believe that the picture is from a car raced a few years earlier than 1960 – perhaps 1956 or 1957.”  Thanks Erich! 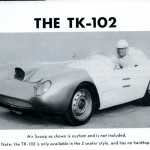 Here’s the Mistral Sports Car Body – Now Called the TK-102. Was Bud Goodwin Involved With This Company – or Perhaps the Owners that Took Over Sports Car Engineering?

TK-103 (McCormack Sports / Custom Car Body):  This is very interesting to me, in that we can now verify that the McCormack continued to be sold at least thru the early 1960’s by Track Kraft as the TK-103.  Like the Mistral, the McCormack was introduced in 1956 by Hank McCormack – more about that in a future story.  The text in the brochure concerning the TK-103 is quite fun to read.  Be sure to review the brochure in detail below.

So the proprietors of Track Kraft had a winning start and designs for each of the models they offered to the public.

Track Kraft – Who Were They?

In researching almost every fiberglass company, Rick D’Louhy and I have been able to identify the principles and / or employees who worked for them, and identify their history too.  However,  Track Kraft has stubbornly refused to yield this information.  Perhaps they did not last that long or make many – if any – cars.  We are still researching their history via magazines (ads, stories, brochures), and have only found one ad, one brochure, and no stories.  I believe I’ve seen more ads, so that may be forthcoming as we continue to push thru the early 1960’s magazines.

However, the Track Kraft Brochure provides a tantalizing clue.

First, the design of it is identical in size to the 1958 Sports Car Engineering brochure.  And it uses much of the same layout and design techniques from the earlier brochure too.  And the image used in the 1960 Track Kraft brochure showing the chassis available is identical to the 1958 Sports Car Engineering brochure.  Both brochures are pretty rare which makes this comparison even more revealing. 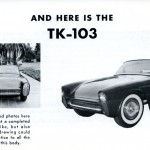 And Here’s Two Great Shots of the McCormack. Now Called the TK-103. I Wonder if the Molds Had Been Sold to Track Kraft or Leased For Their Use During This Time? So Many Questions….

It’s possible that the proprietors of Sports Car Engineering which didn’t last but 2-3 years closed shop and opened up again at a new location under a new name – with new models of cars to boot.

In addition, Bud Goodwin may or may not have not been involved.  He had sold Sports Car Engineering to “Du Crest Fiberglass” in 1957 or 1958 and it might be the new proprietors of Sports Car Engineering who opened “Track Kraft”.  If that’s the case, it’s a matter of tracking down the folks at Du Crest, and to that end – I do have some leads.

As they say, research continues and time marches on.

So this is what we know, and this is an opportunity for those of you interested to participate.  Know of any articles?  Find other ads?  Other brochures?  Did anyone buy a car body from this company?  Any and all information you might have out there on Track Kraft is welcomed, and will help clarify the history of this interesting company.  Paul Sable and I will thank you.  Probably Rick D’Louhy too.

Hope you enjoyed the story, and until next time gang….

Here’s The Ad that Paul Sable Sent Me. It’s from the May 1960 Issue of Motor Life. Have Any Of You Seen Other Ads or Brochures Out There for This Company Gang? 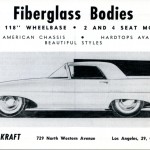 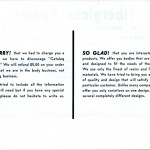 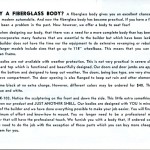 Here are Two Drawings of the TK-101. Nicely Designed Car – Available in 2 or 4 Passenger Sizes. Who Could Ask For More? 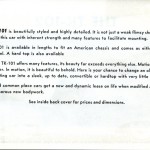 Here’s the Mistral Sports Car Body – Now Called the TK-102. Was Bud Goodwin Involved With This Company – or Perhaps the Owners that Took Over Sports Car Engineering? 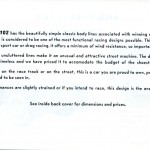 And Here’s Two Great Shots of the McCormack. Now Called the TK-103. I Wonder if the Molds Had Been Sold to Track Kraft or Leased For Their Use During This Time? So Many Questions…. 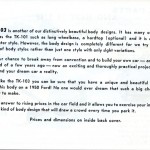 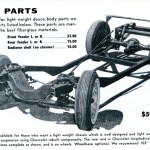 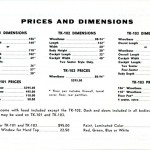 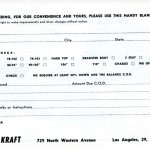 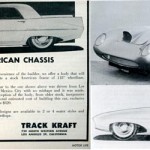