Great news….we found another Victress employee – and a very special one at that.

Barry Tousley joined Victress in late 1953 – the same time as Merrill Powell – at the ripe ole’ age of 9 (Merrill was older than Barry).  That’s right….9 years old.  He had to get permission from his mother first, but we’ll get to that part in a minute.

Born July 5, 1944, Barry, his sister Mary Ellen, and his mother lived in the North Hollywood, California area – directly across from Victress Manufacturing.  His Mom worked “The Ivy House” which was close to their home.

The kids in Barry’s neighborhood used to canvas their area and collect pop/soda bottles to turn in for the 2 cent deposit.  Barry, ever the enterprising young man, decided to do what any good young “master” businessman would do – he expanded his territory to across the street at the industrial park.  Victress was one of the many businesses across the street, and it looked like a promising move.  And as you’ll find out…it certainly was for both Barry and the gang at Victress.

Barry started to go over to the industrial park about once a week, and the guys in there – mostly the folks  at Victress – started to save the bottles and waited for Barry to come and collect them.   This was late in 1953 and Barry was just nine years old.  And Barry was serious about his task – and for good reason.  His family was like many families across America and was trying their best to make ends meet. 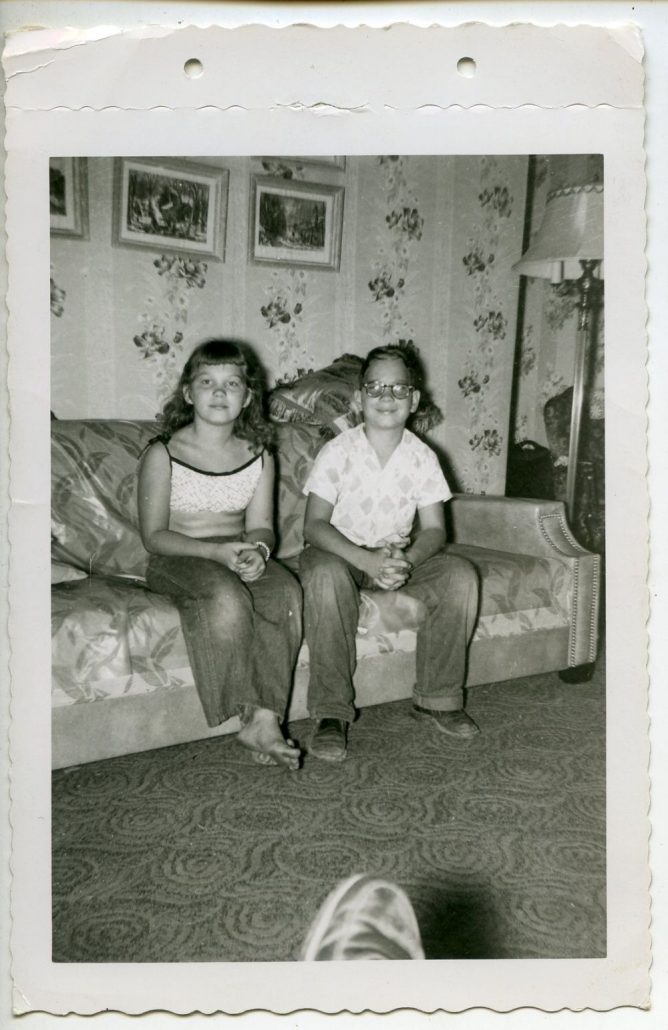 Barry and his sister Mary Ellen in 1954 – when Barry was 9 years old. His sister is about a year younger than Barry.

He continued collecting bottles for a few weeks in the fall of ’53, and then the guys at Victress surprised Barry.  Doc Boyce-Smith, Merrill Powell, Bill Quirk, and others decided they would offer Barry a job – the first and only young Victress  apprentice they would hire.  First, though, they contacted Barry’s mom to get her permission, and the next time Barry came over to collect bottles they sprung a question on him.

One of the Victress gang – probably Doc Boyce-Smith – turned to Barry and said “you know what….we could use someone like you around here to help us a bit.   That is, sweeping the floors, picking up around the shop….how would you like to help us when you’re here?  A small type of job.”

“Would I ever!!!” Barry remembered saying. 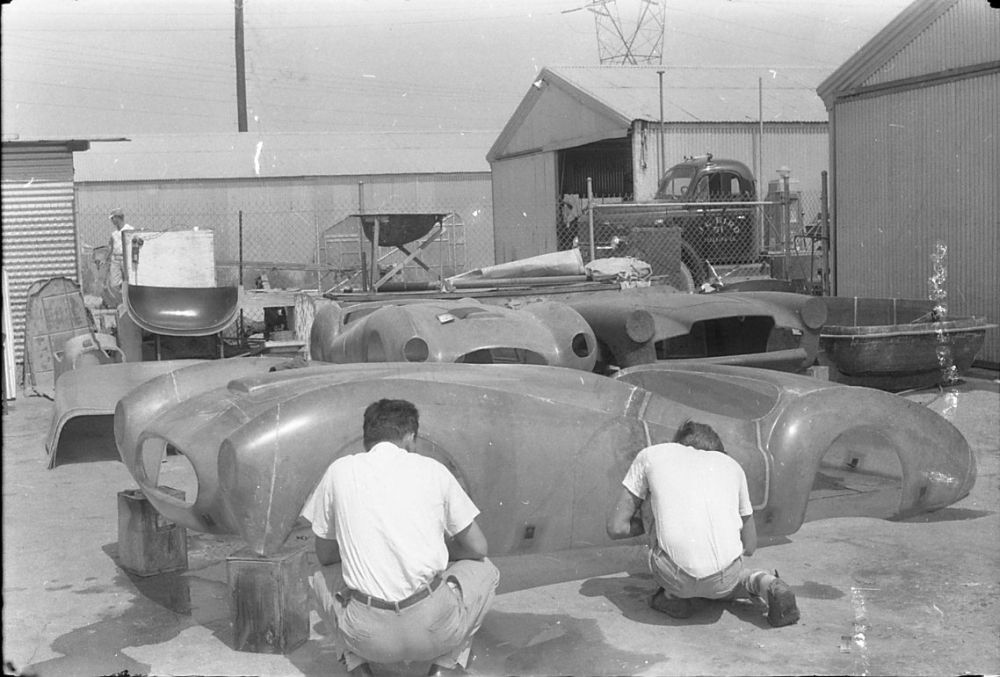 A typical day at Victress Manufacturing. Was Barry hiding just outside the camera angle this day???

Barry remembers working at Victress for about 6 months and stopping in the summer of 1954.  He earned more than a $1 a week and less than $3 – from what Barry and one of his bosses – Merrill Powell – remembers as of today.

He remembers learning all sorts of things at Victress – he was the curious type even though he was just 9.  He watched them lay up fiberglass bodies in the upside down molds.  He watched them mix resin.  He watched them work on cars.  Barry also remembered they had some fun with him and showed him what would happen when resin was mixed in a cup and got “hot.”  Someone poured water into the cup and it started to boil immediately.  To this day Barry remembers being perplexed how the water could boil but the cup didn’t burst into flames.  He remembers that the folks at Victress enjoyed his curiosity and his reactions to new experiences too 🙂 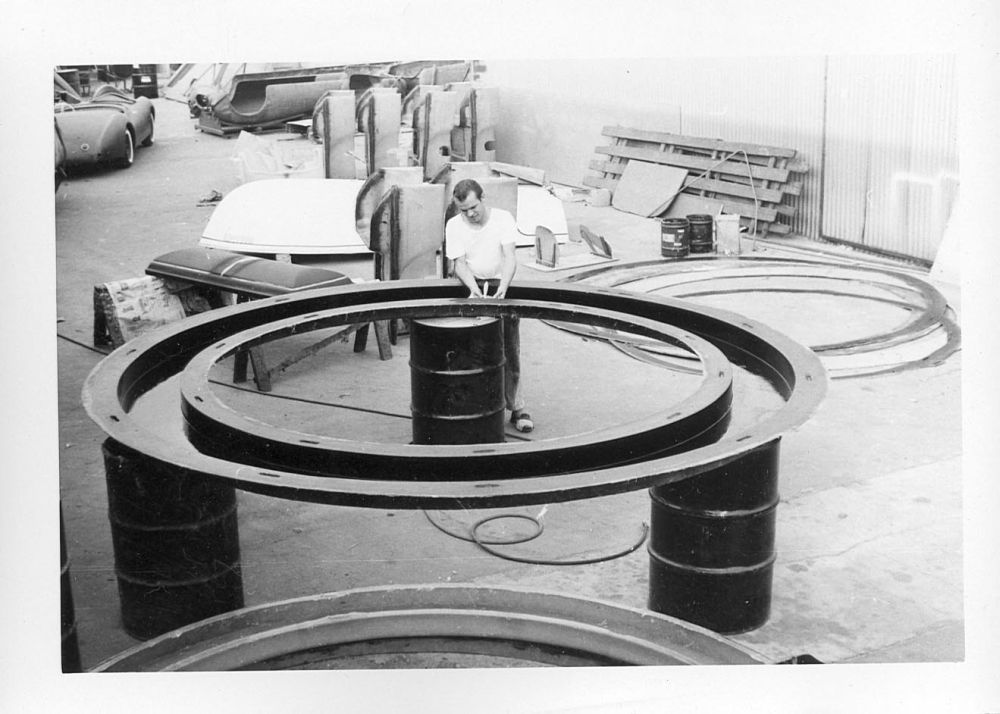 Check out the Victress S1A Mold and Car at the rear of this photo. Here is Tom Sane working on the Olympic Rings for Squaw Valley – more about this in a future story here at Forgotten Fiberglass.

This must have been great fun and work for Barry.  Each day after school he would run home and show up for work at Victress – like clockwork.  This continued through the early summer of 1954 when his mother moved outside the area of North Hollywood, and Barry’s days of employment came to an end.  He was after all, 10 years old in the fall of 1954.  Back to school for Barry!  However, during his time at Victress, he had saved enough money school clothes, shoes, a jacket, and other items he needed.   A great success for a first job 🙂

Although Barry left Victress in 1954, he caught the “car bug” from his days there.  Barry told me that working at Victress at such a young age imparted a love for cars on him – something he started working on when he was 15 years old and got his first car – a 1951 Mercury.

But his memories of Victress held strong with him for over 50 years, and it was last year that he first found an article showing the name of the car and the place where he worked – Victress Manufacturing.

It wasn’t long until he found us at Forgotten Fiberglass, and we put him back in touch with the folks he worked with – Merrill Powell and Bill Quirk.  A fun reunion was had by all.

Let’s have a look at more photos from Victress from back in the 50s.  This is what it was like when Barry worked there, and perhaps Barry himself will chime in with some comments at the end of our story below. 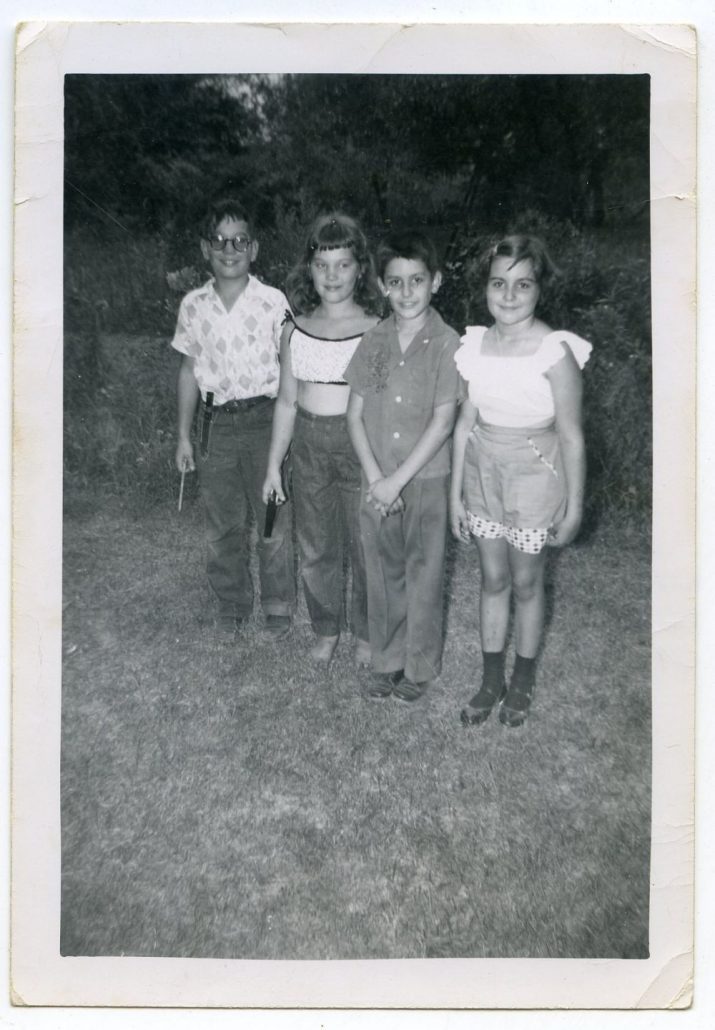 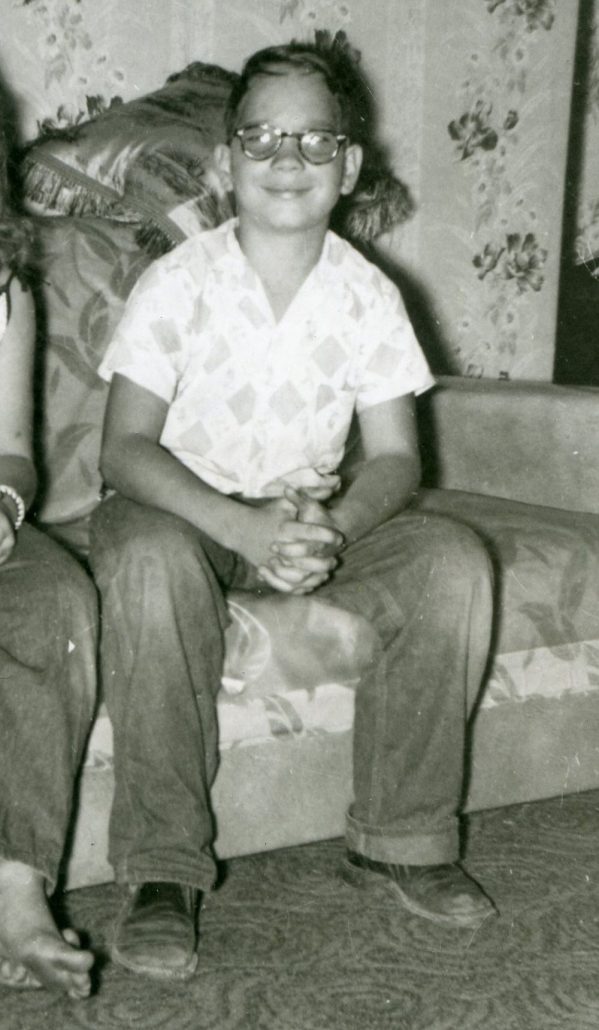 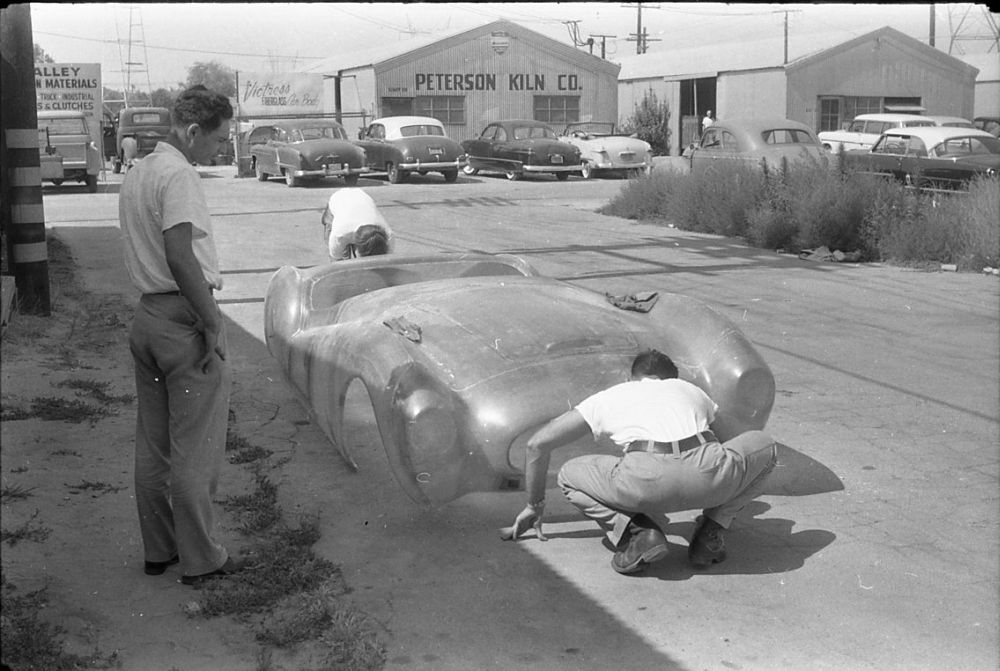 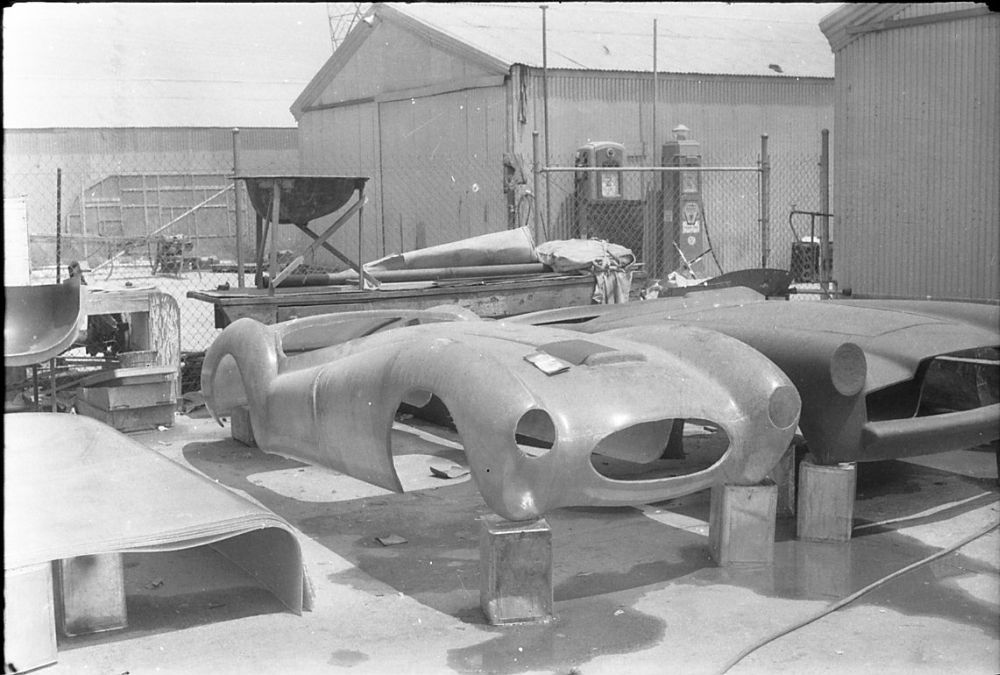 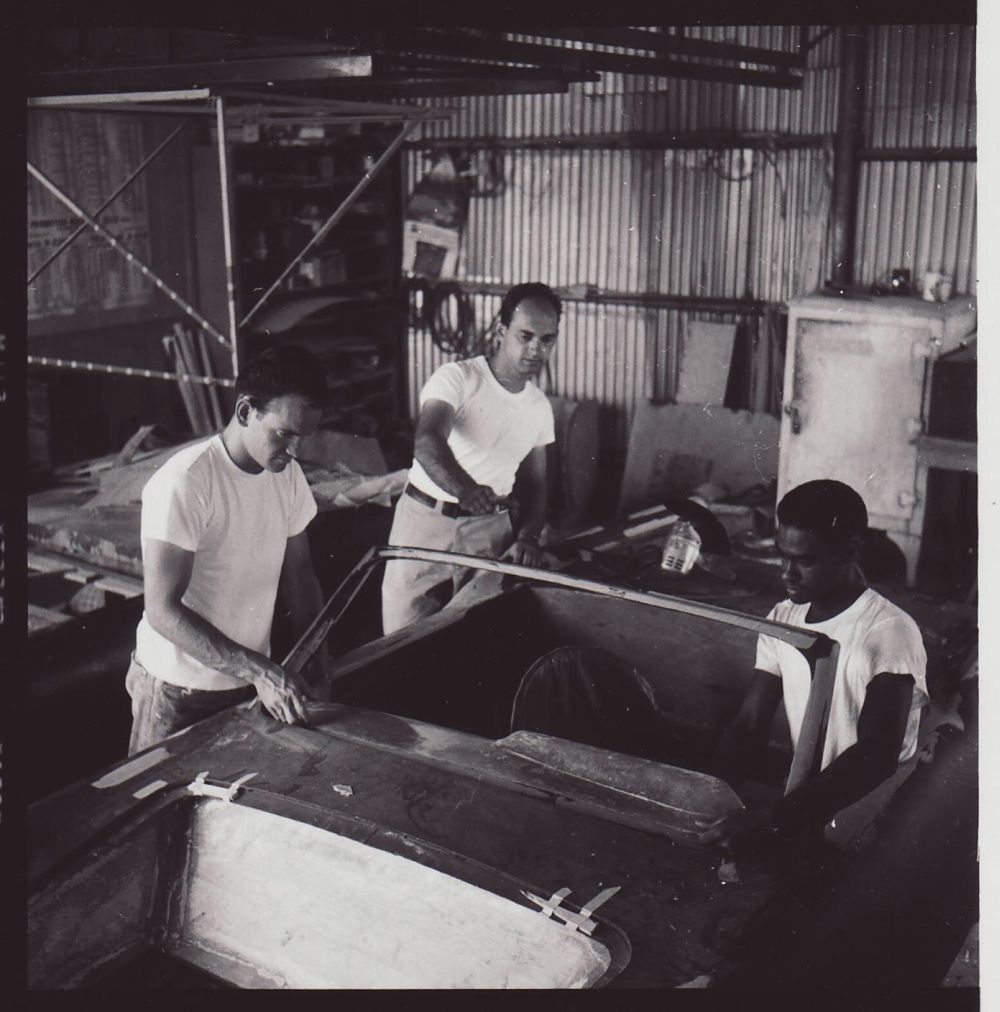 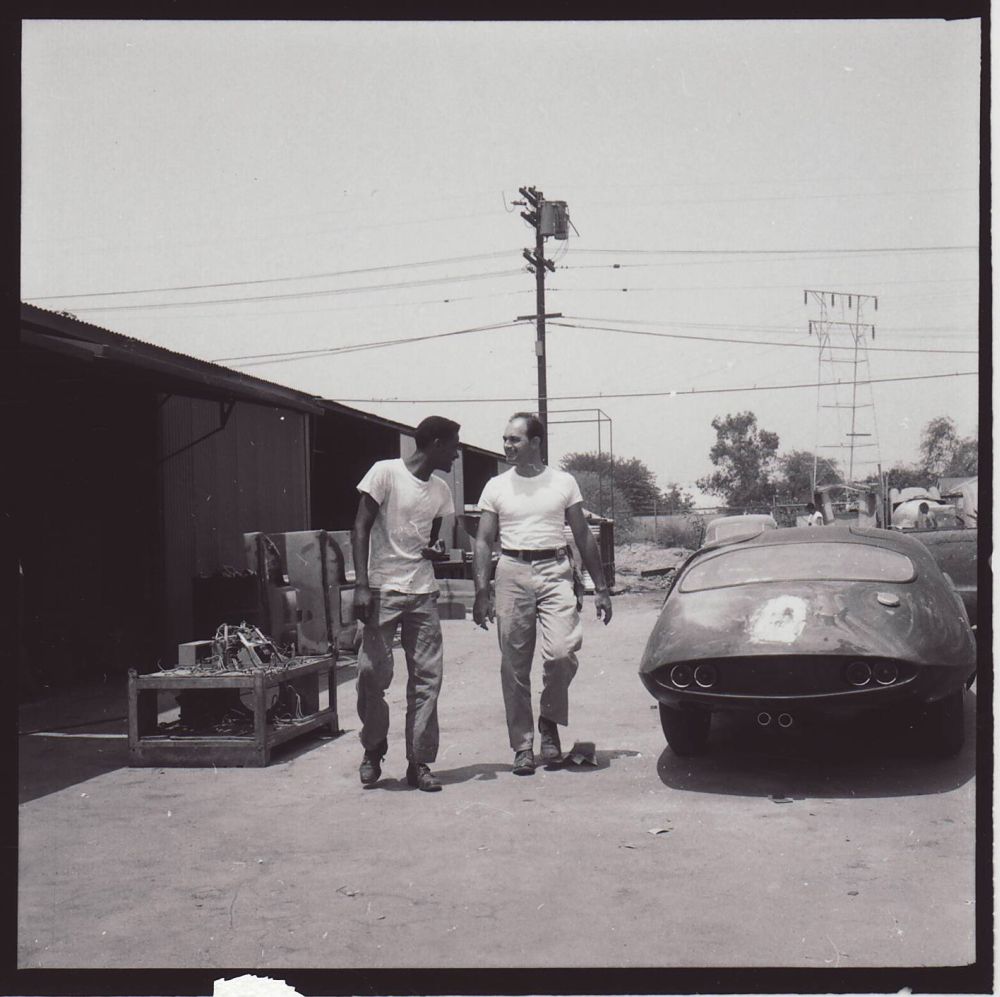 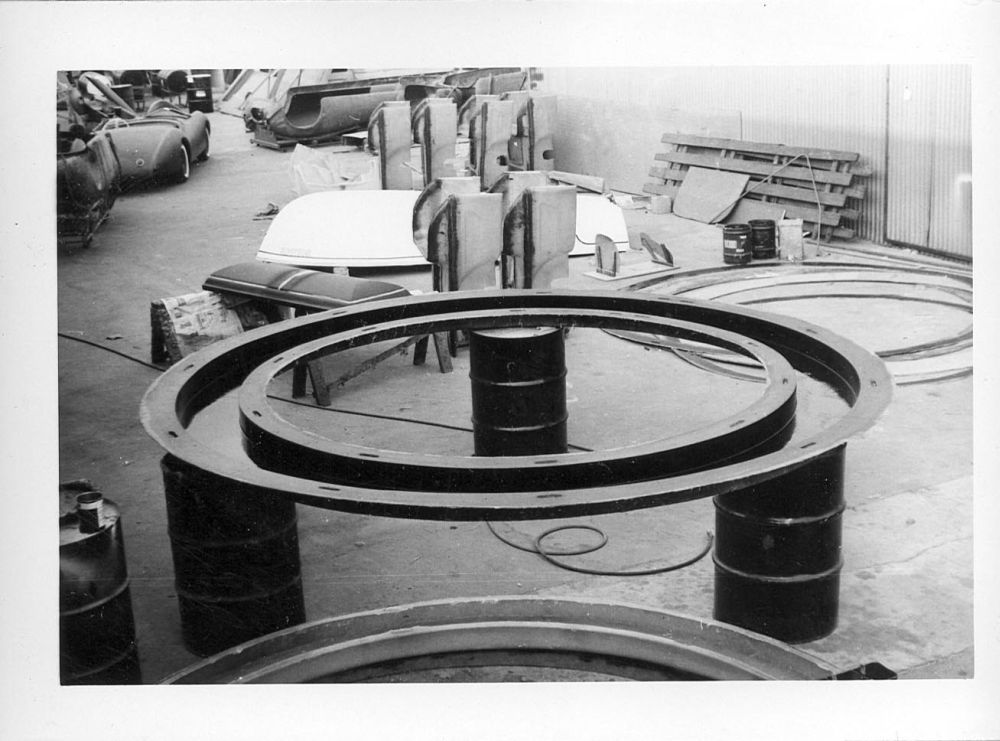 But the story doesn’t end there.  And in fact….you can help too.

Who wants to join in the fun and find an S1A for Barry?  Add my name to the list here gang and let’s see what we can do for Barry!