Note: This is a multi-part story, and click here to review all parts of the story

One of the tools an excellent researcher may have at his or her disposal is a photographic memory.  Lucky for us Joel Driskil has such a memory.  Late one night in September, 2017 Joel was doing what many of us do – reading magazines and surfing the internet.  More specifically, Joel was reading vintage Hot Rod magazines and surfing eBay.  You just can’t stop those tough, dogged researchers.  And it was a unique set of circumstances where Joel, on the same night, was…

Most of us would have cruised past the eBay ad without much notice.  After all, what was being advertised were parts – not a car.  Check out the ad below which included six photos: 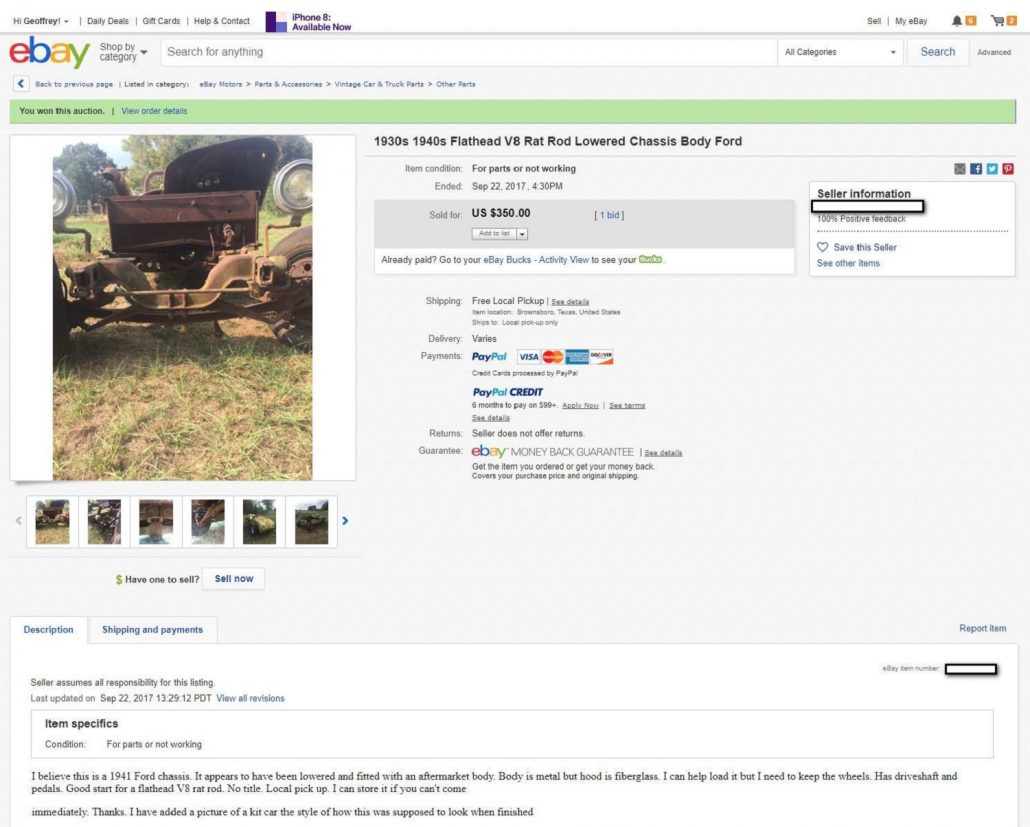 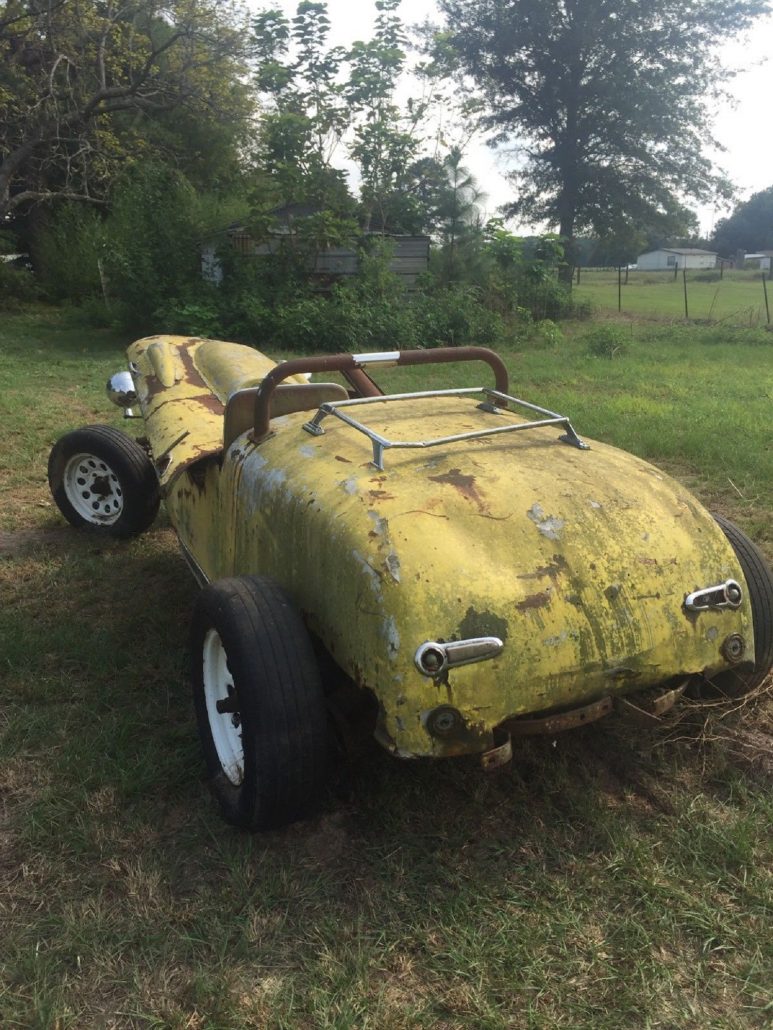 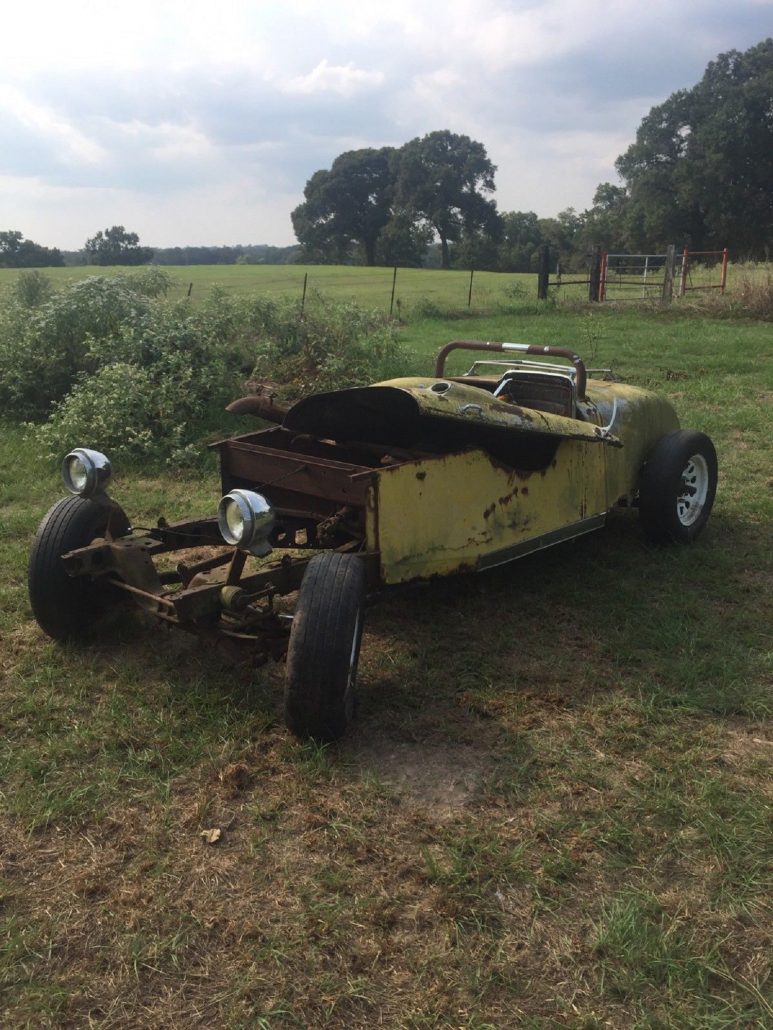 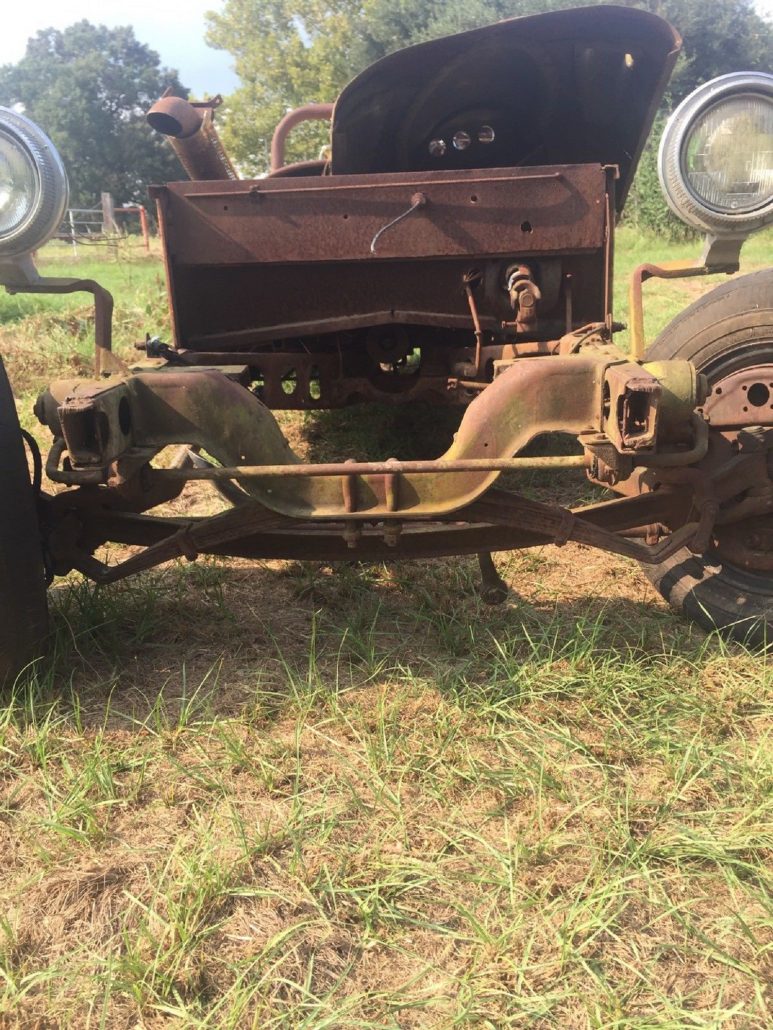 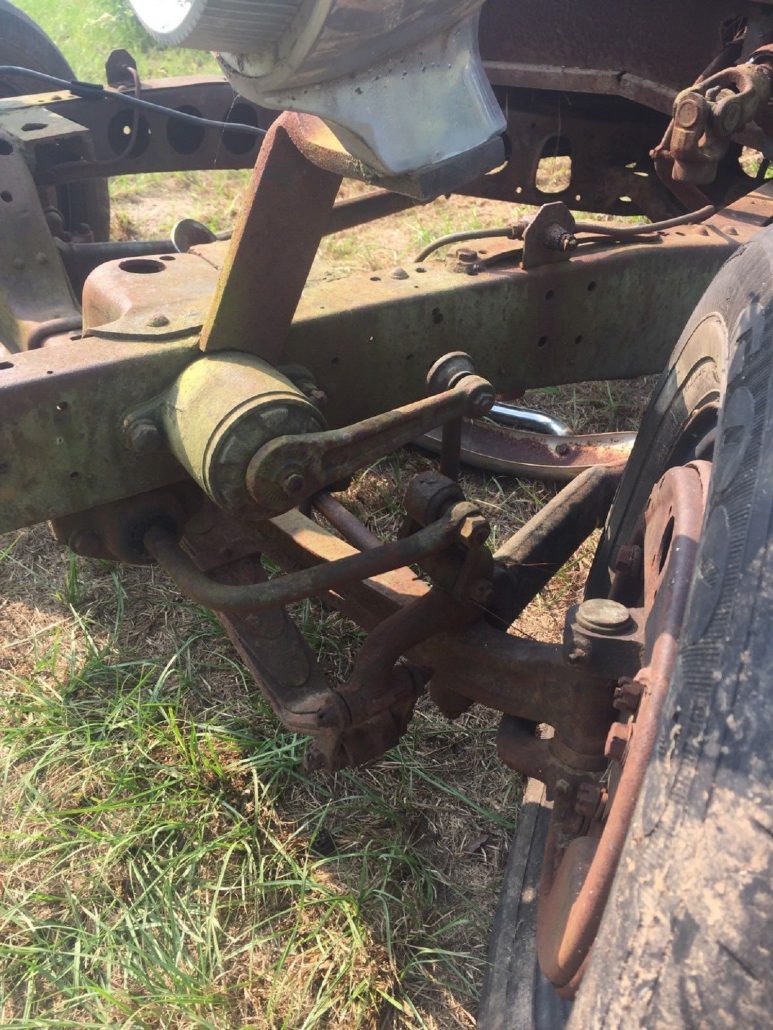 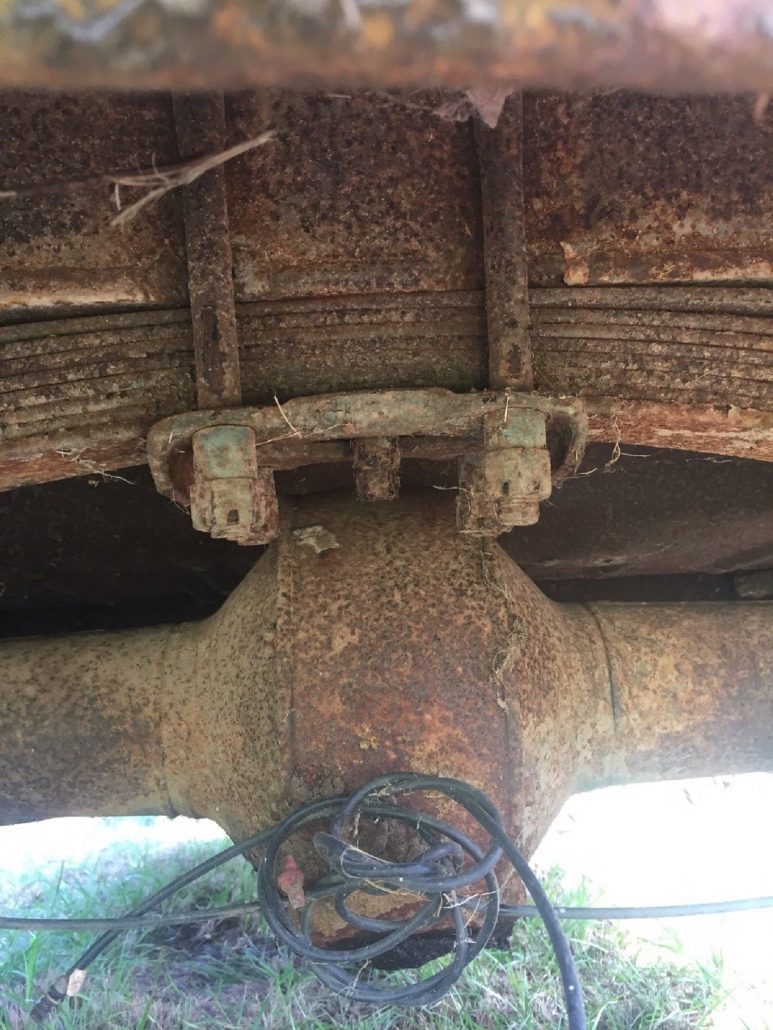 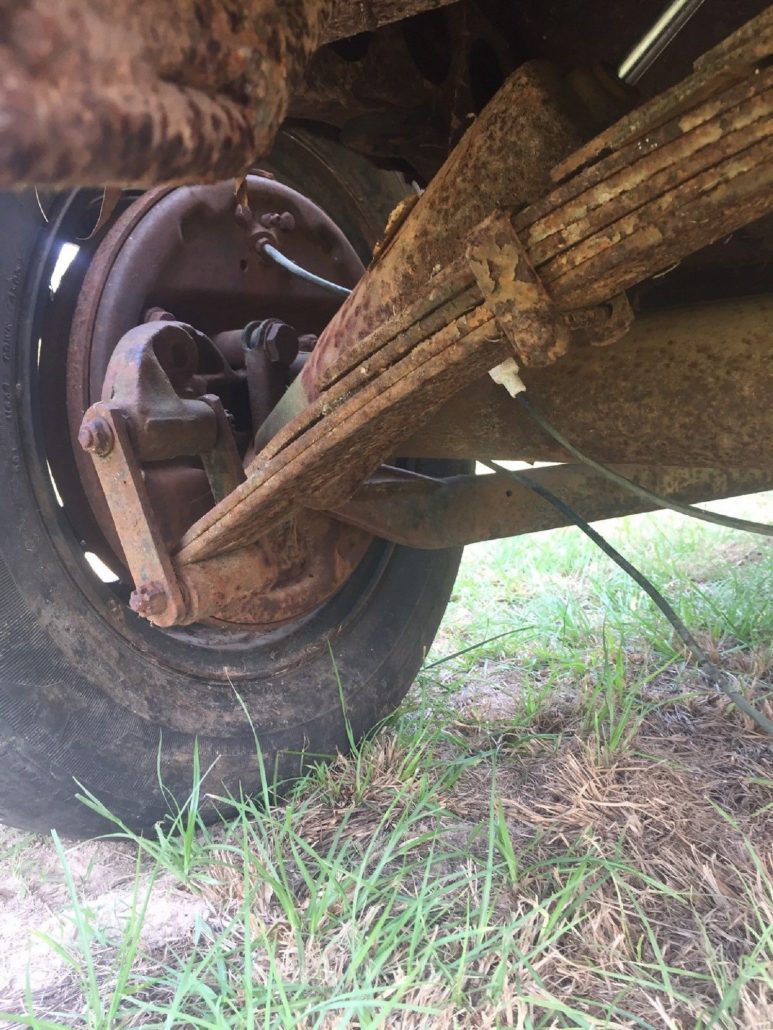 Click here to see vintage photos of the Daniels Hot Rod in the Original Hot Rod Magazine article from July, 1950

Like I said…Joel has a photographic memory.  And then, by chance, I gave him a call – or him me.  I was just about to learn what Joel had found.

The Importance of History

Undiscovered Classics is about celebrating the corners of history where few people travel.  Finding the story – and hopefully the car – where an individual designed and created something “against all odds” (as Rollie Langston often says about us) is what we’re about and what our group does best.

Joel shared that he had found what appeared to be an early Hot Rod and the history with it too.  He wasn’t sure what he wanted to do with it and we discussed that for some time.  Keeping, selling, ignoring….all possibilities were in play.  And ultimately after several discussions and some time – we decided to partner on the Speedster and see where that would lead.

Getting the hot rod back from Texas proved to be an adventure by itself.  Oh….I forgot to share.  We won the eBay auction for the car/parts at $350.

I had recently met Jack Farr when he acquired an interesting movie car used in the Arnold Schwarzenegger movie “Total Recall” in the early 1990s.  Jack had been assembling movie cars for a museum that he was putting together at his “Texas Motorsport Ranch” (more about that in a future story.)  Jack has vehicles from Jurassic Park, Batman and other Iconic movies and it’s a hoot checking out photos from his collection.  We look forward to visiting him in the future and checking out his collection in person.

So our adventure in saving this historic Hot Rod fell to Jack Farr who then took on the next adventure of picking it up for us on his way with an empty trailer to Tampa, Florida.  And of course the normal problems ensured.  First it was raining and dark when he got there to load the car.  And of course that added to the mud and mess that was the area where the car would be loaded.  But that turned out to be a good thing because as I recall either none of the wheels rolled or just one.  Either way we were thankful to hear that Jack had a winch on board, and the car was locked, loaded and on its way to Tampa.

Jack brought the hot rod with him on his way to Florida (thanks Jack!) and it arrived on December 28th, 2017.  A near perfect after-Christmas “Christmas” gift.  And those of you who know the variety of cars that are at or arriving and departing from my house….you can imagine the holiday joy that the neighbors felt when they saw another one of our “treasures” arriving at Undiscovered Classics World Headquarters (my house).  Y’all should come down and visit sometime (call first).

In the photos below, you’ll see some of the friends of Undiscovered Classics helping drag the Daniels Speedster out of Jack’s trailer and onto the street.  Great thanks to Art Flores and Ray Hansil for their assist and of course to Jack Farr and his son Jimmy for helping bring the hot rod to its new home in Tampa, Florida.  Here are some photos showing the day it arrived:

And check out the 2 minute video below showing the Hot Rod in “as-arrived” condition down to the 1988 Suzuki Samurai wheels it was wearing when it arrived.

Good friend Nate Bowne has been working with us for nearly 5 years now and we called upon him for his help in getting this car rolling.  Lots of effort and hard work finally freed the brake drums from the spindles/axles and a quick reassembly without brake parts meant the wheels were free.

Check out his work and the condition of the parts in the photos below.  The parts showed it sat in water for more than a short time and there was a wasp nest and a red colored wasp still in the drum when removed.  Thanks for your bravery Nate 🙂 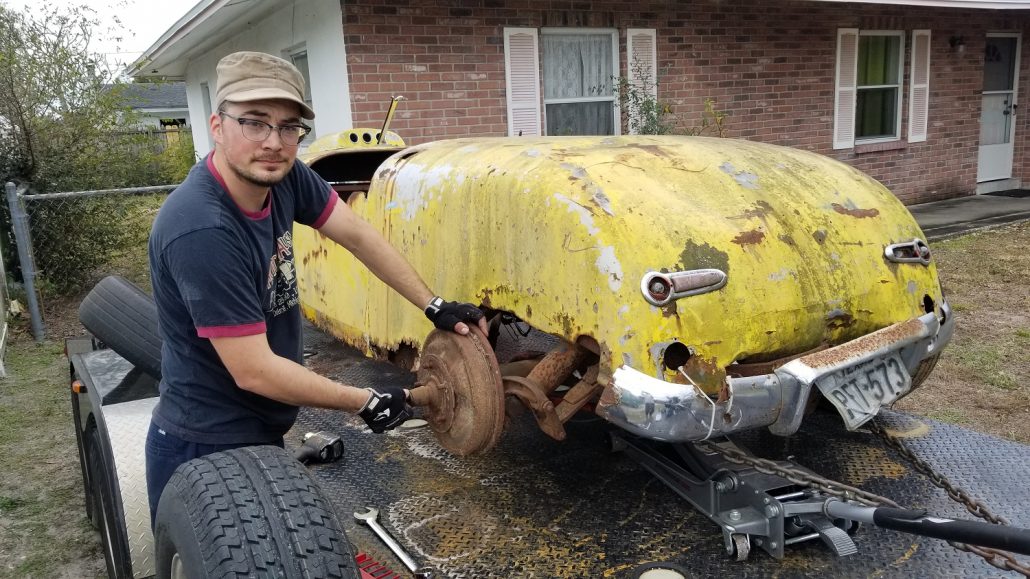 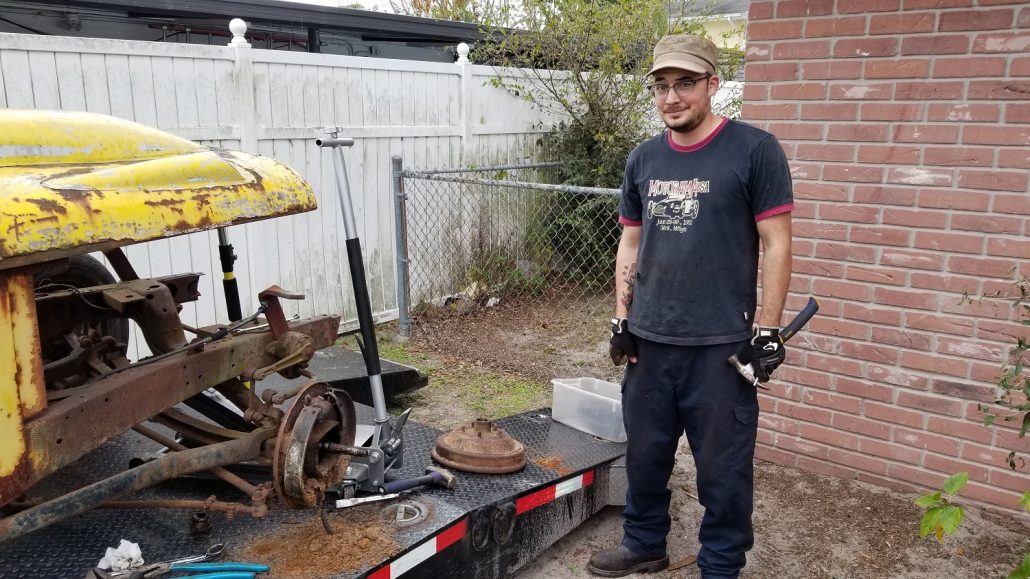 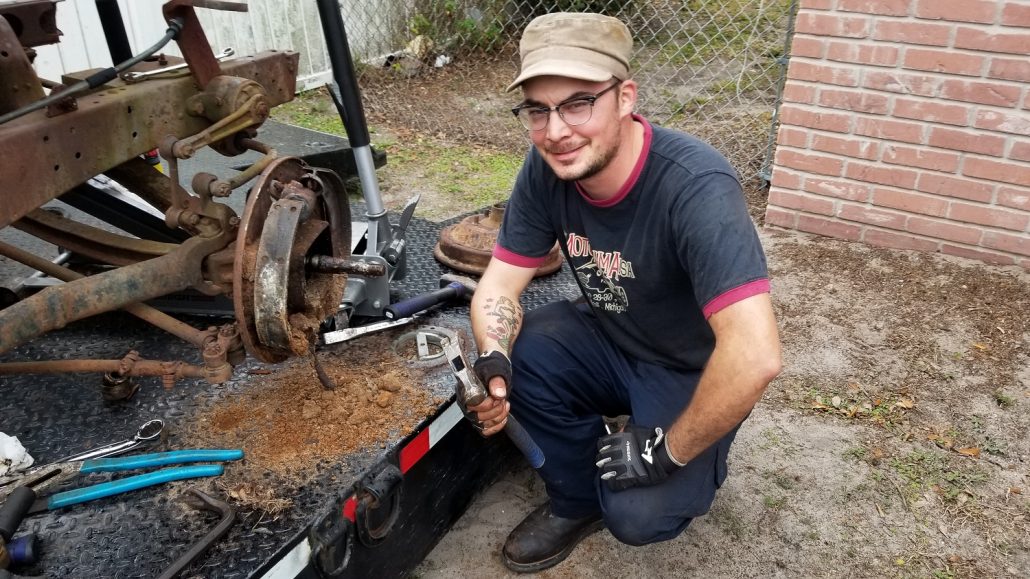 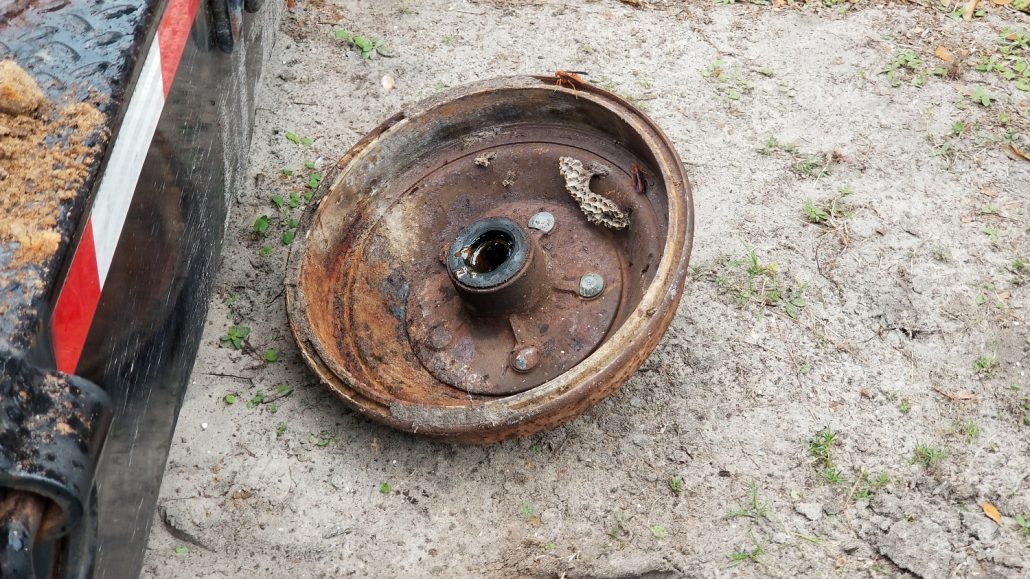 So What Do We Have?

Nothing worthwhile in life is free.  I say that because the condition of the hot rod certainly means we’ll have to be at the top of our game to get it done.  But that’s what we do, and believe it not when I look at it, I think we have a lot to work with – no different from many of the cars we’ve done (click here to see our run up from soup to nuts in getting our 1950 Leo Lyons Custom Mercury restored and on the lawn at the Pebble Beach Concours d’Elegance).

The drivetrain is missing along with the Columbia 2-speed rear end.  The hood has been substantially modified but appears original.  What will take the most effort in our opinion is the build of the grille and shell.  We’ve got great folks who bring these cars back to life for us and we were thinking at the moment that it would be heading to Ralph Smith and his Team for restoration (as many of our cars have in the past).  Let’s check out some photos and kudos to Art Flores (shown in the first photo) who helped us stage the car to take these shots. 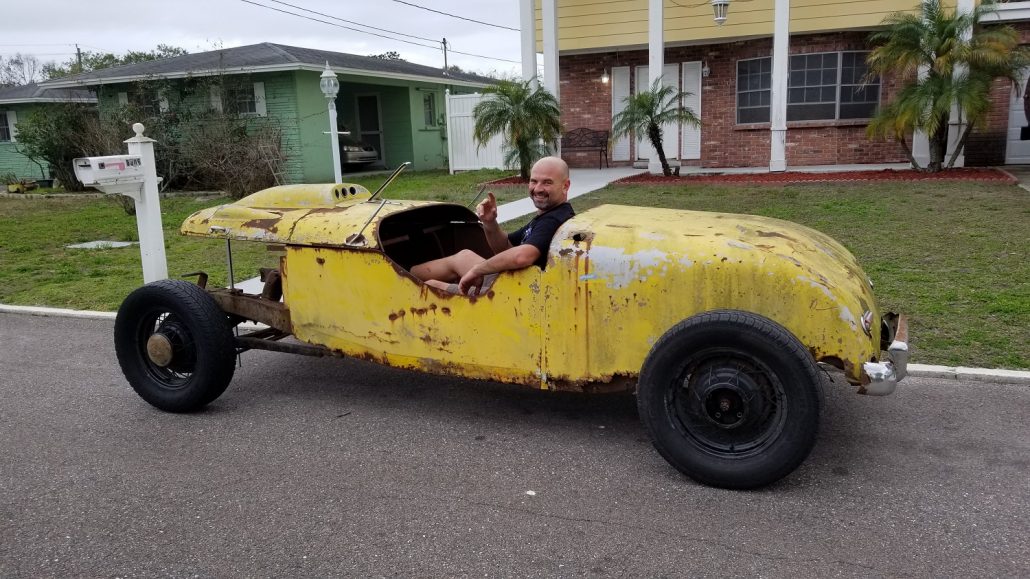 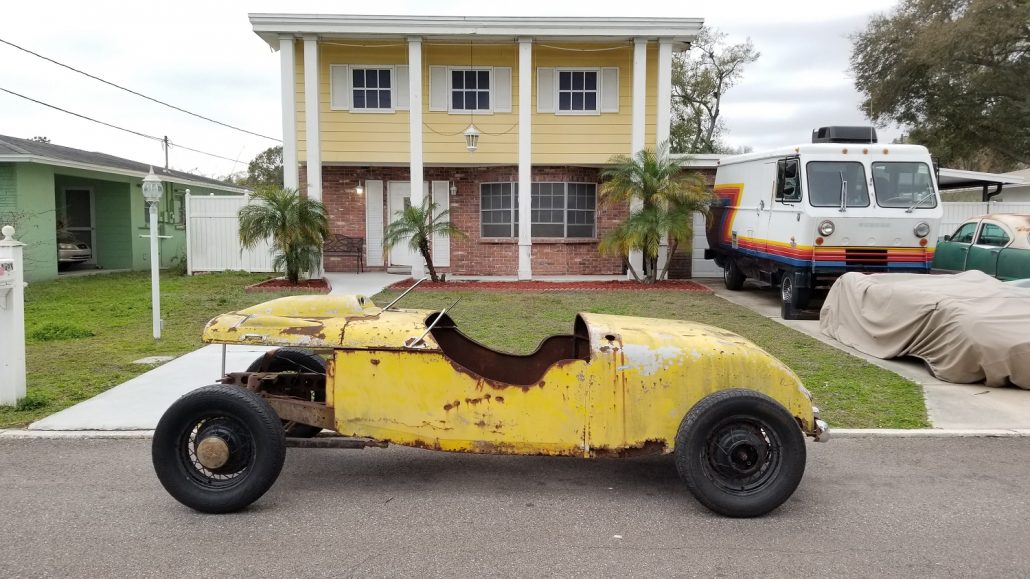 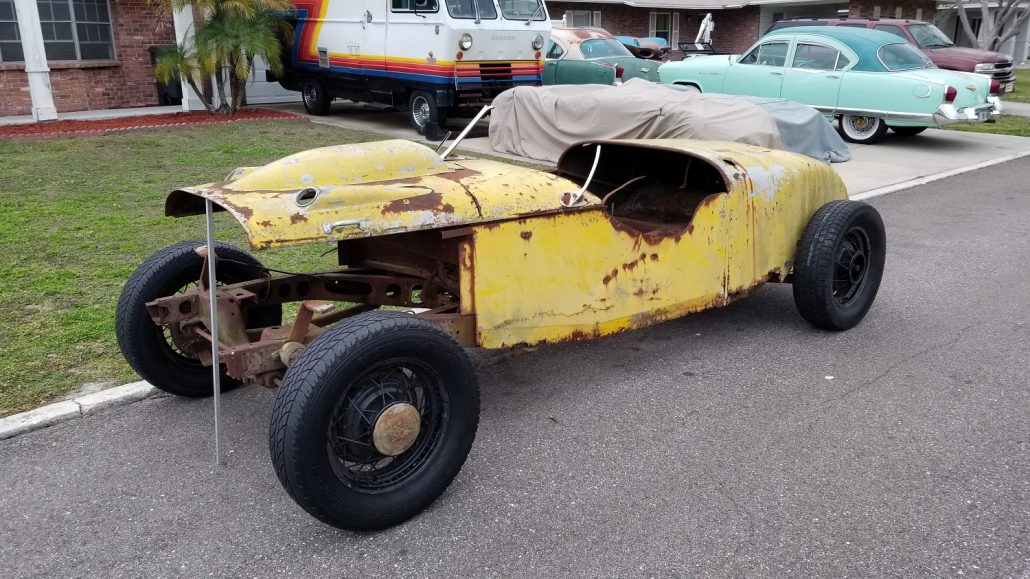 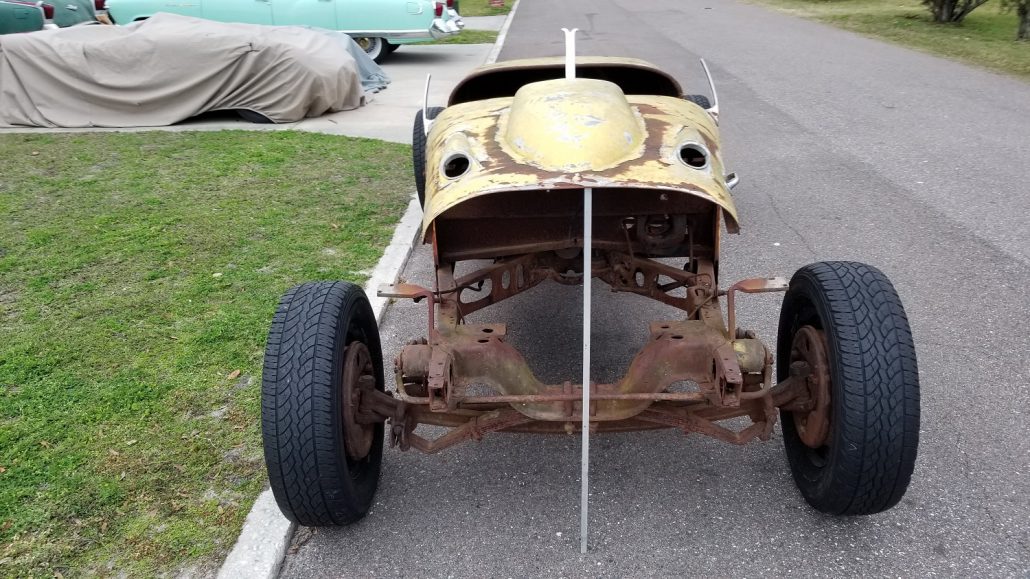 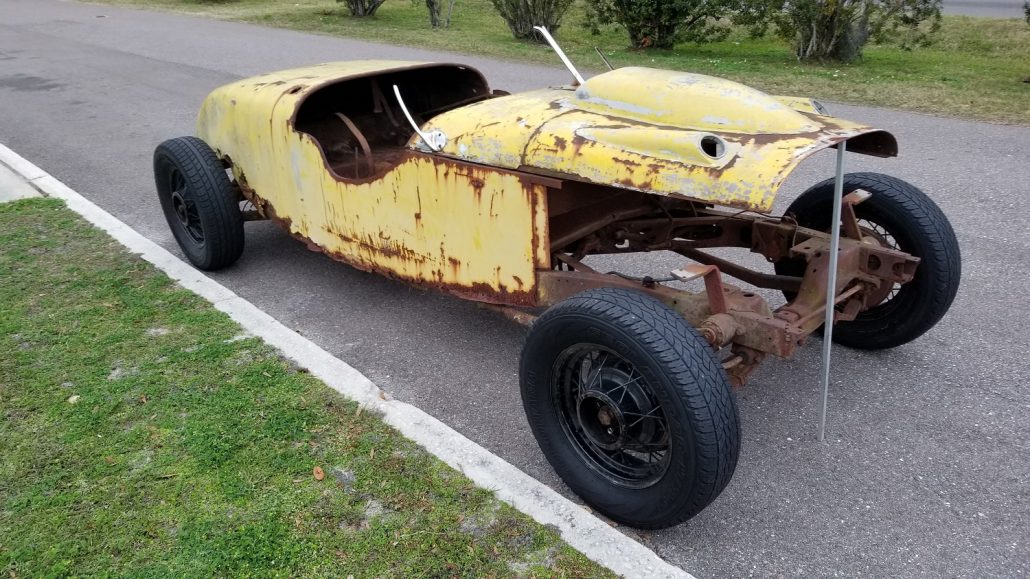 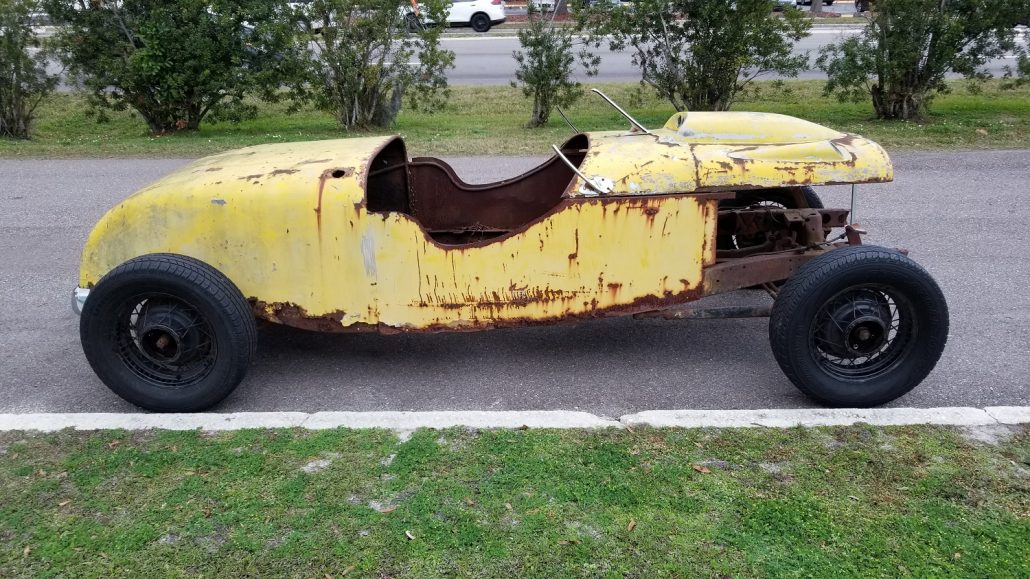 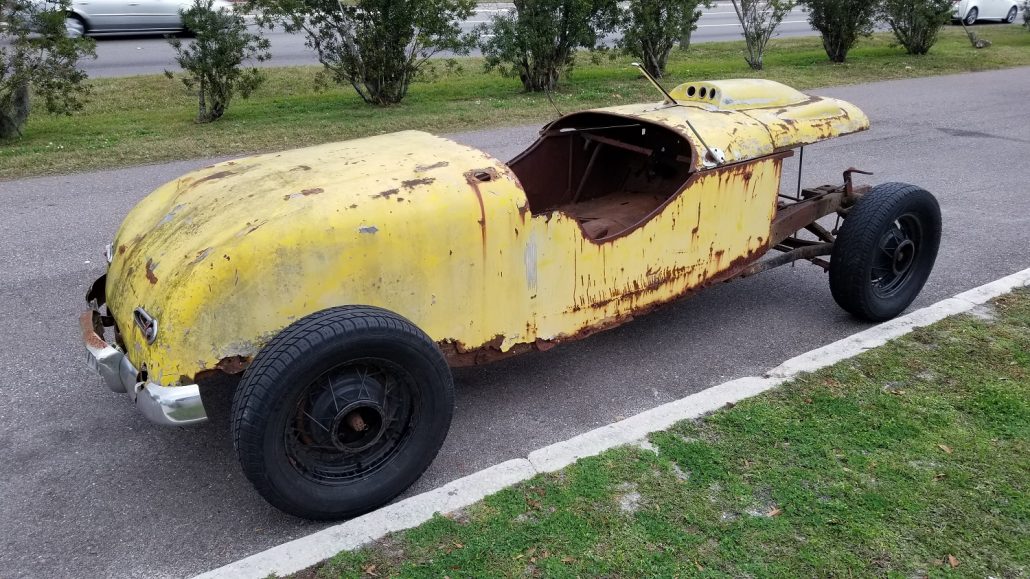 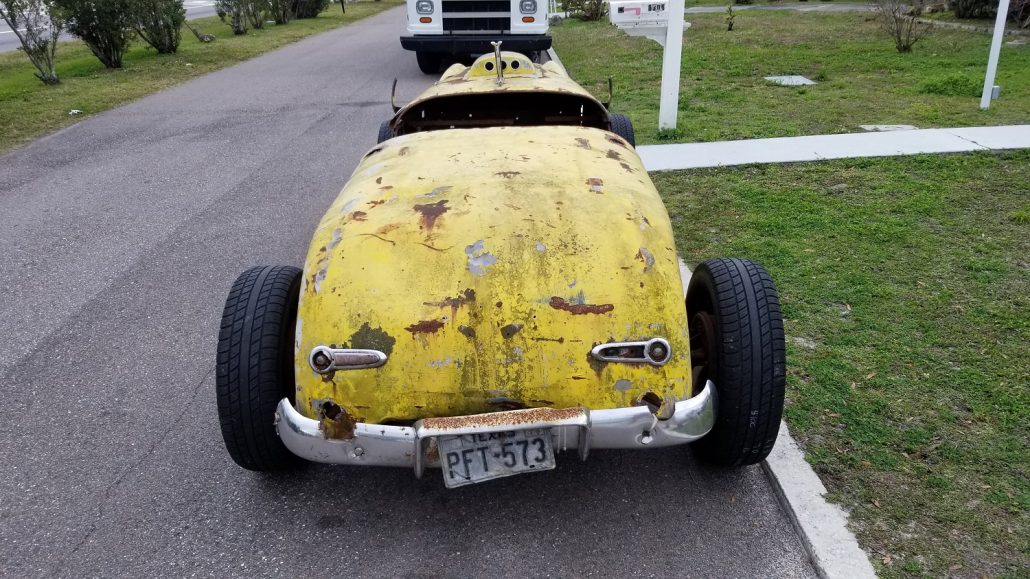 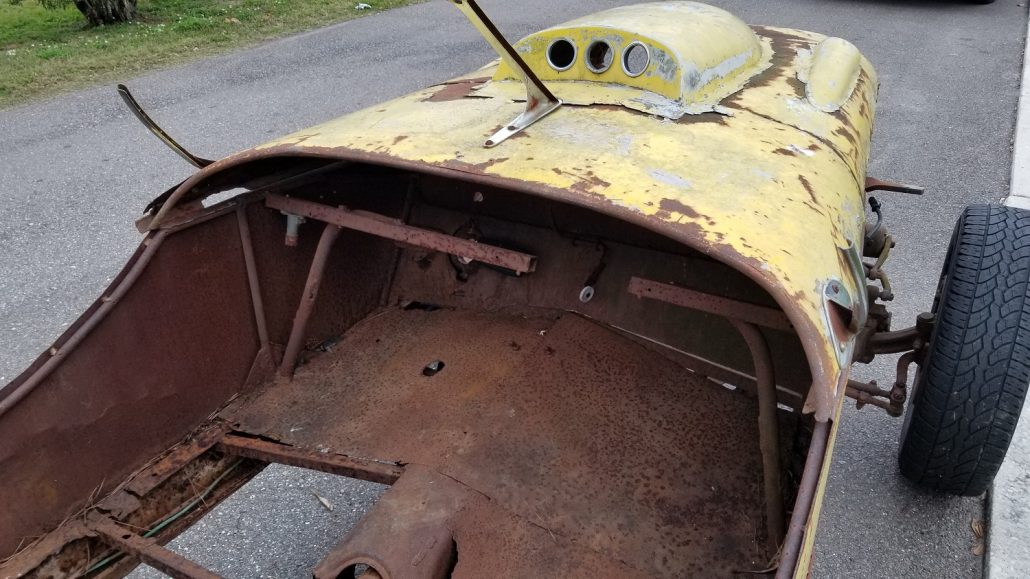 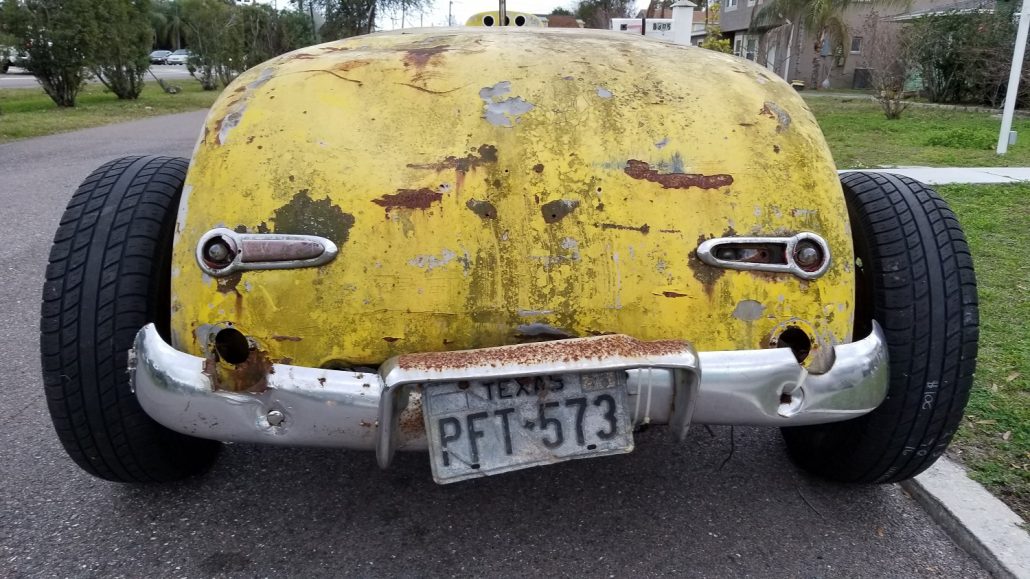 So Joel found the car and we saved it and brought it to Tampa, Florida.  It’s never about the efforts of one person.  It takes a team…a community as they say.  So what’s next?  That part falls to Nate Bowne and his investigative work in finding the Daniels family which will be in part 3 of this story.