America is replete with stories on building your own car or car company in the early postwar years.  While 90% of these stories came out of California, the rest of America was also busy – including Charles “Chuck” Goff of Texarkana, Texas.

While we research all handcrafted cars of the postwar era, there are a few cars that I took special interest in for personal reasons.  One was the Chicagoan Concept car which I researched, later found and now own.  Why was I interested in this car?  Because….my family is from Chicago and I thought it would be cool to say that we found and restored the “Chicagoan.”  And because it’s a cool car.  The Chicagoan is in the “que” for restoration but you can click here to learn more about this car and its marque.

It’s a similar story on why I was interested in finding out more about the “Goff” sports car but this time it wasn’t based on a location.  It was based on a name.  My name.  Geoff.  “Goff” was close enough to “Geoff” so let’s go out and find out more about the “Geoff”….I mean “Goff.”  Ok…I’m not always as serious as I sound and the story, it turns out, was quite a bit fun.  Let’s find out why. 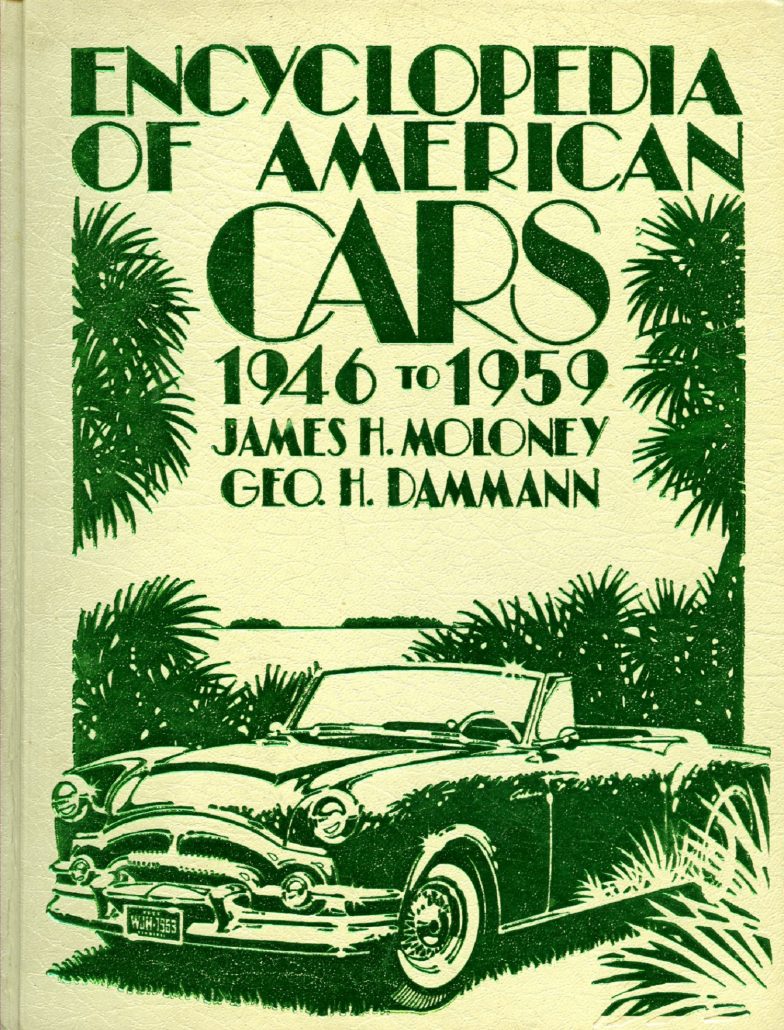 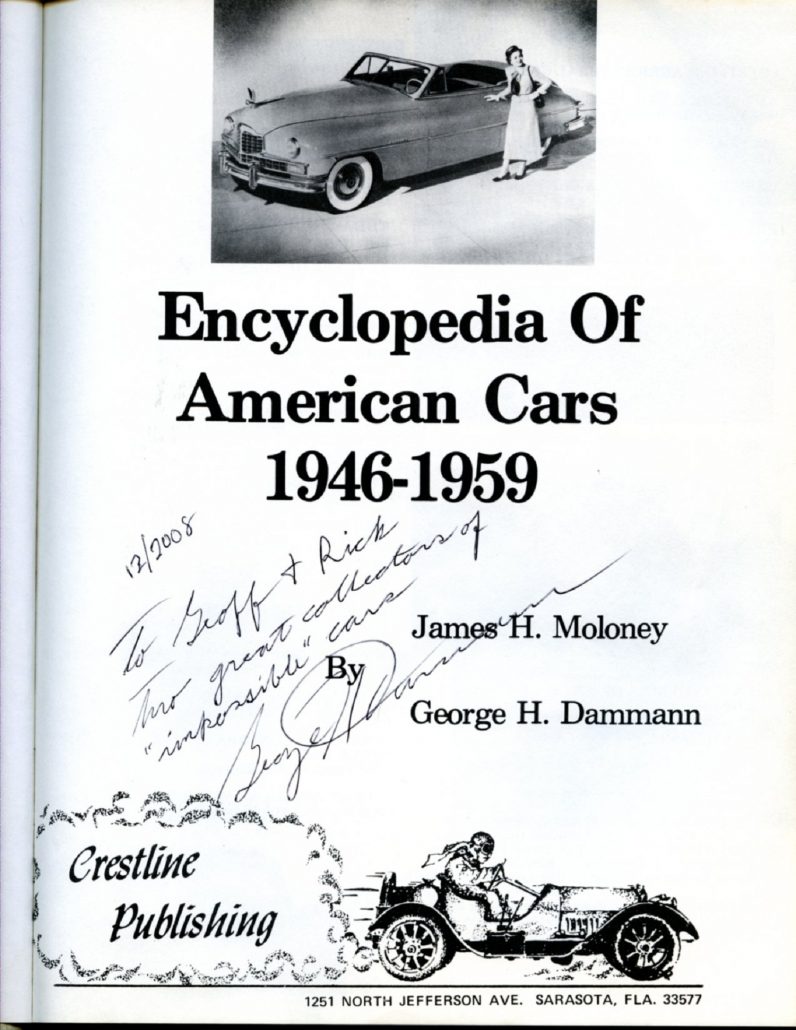 Since I was a teenage, I have treasured my books from the Crestline Series – one that was founded and run by good friend George Dammann.  And while I’ve been a fan of George’s and the books he produced for nearly 40 years, I only met him back around 2009.  George and his family live near me in Venice, Florida and if his name and company (sold many years ago to Motorbooks) is not familiar to you, click here to learn more about George Dammann and Crestline books.

My favorite Crestline book was about the Automobile in the postwar years titled “Encyclopedia of American Cars: 1946 to 1959.” I used to pour through this book absorbing the details on makes and models learning as much as I could.  But it wasn’t until 2007 where I noticed another section in the book at the very end.  This section wasn’t indexed at the front of the book, and I missed it all those years.  The section was titled “Broken Dreams” and was authored exclusively by George Dammann.

This section of the book focused solely on low volume and in some cases “one-off” cars that were built in the postwar era.  It had been a favorite of task of George’s when he was young to cut out articles and save information on these cars as he learned about them back in the day.  Years later he would extend this early research involving other people and document these cars and their story more thoroughly.  Perry Zavitz would do a similar job in the same timeframe and you can read about his exploits by clicking here. 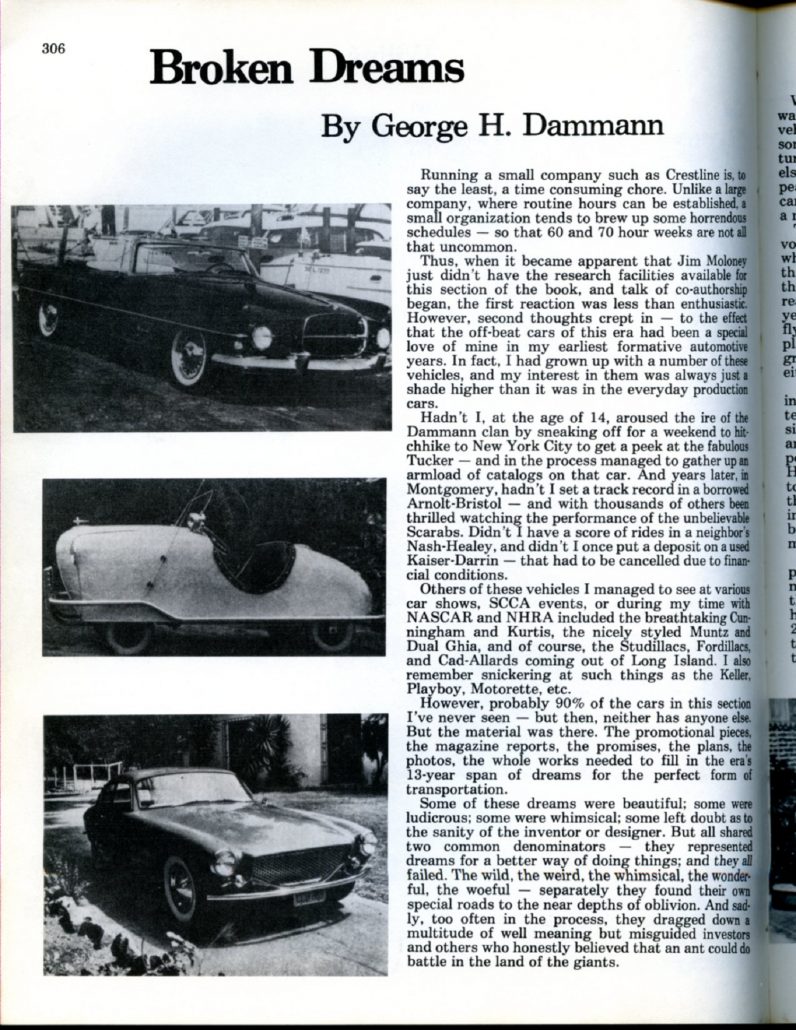 It was some years past 2007 when George shared with me that he hadn’t imagined that many or any of the cars survived that he wrote about in this section of the book.  The fact that we had found so many of the cars and the history of their marques astounded George (and us, frankly, too).  My attitude toward researching cars is based on the famous line from the X-Files TV Show – “The Truth is Out There.”  We just exchanged the word “Truth” for “Cars” and went out to find them – and we did.  That is, “The Cars Are Out There.”  So it was in the section titled “Broken Dreams” that I first read about the “Geoff”….I mean “Goff.”  Here’s what it said:

“Whether or not full production of the Goff ever got underway is not certain.  Built by Charles R. Goff of Texarkana, Texas, the prototype was unlike most sports cars of its kind in that it was designed as a 5-passenger car for sporty family transportation and not as a 2 passenger car for competition.

The Goff used a 1939 Ford chassis and a locally built fiberglass body with a removable fiberglass or plastic roof.  Mr. Goff envisioned the utilization of used Ford chassis and running gear of pre-war vintage in order to keep his production costs down.  And in 1956 when the Goff was designed, there was a plentiful supply of such units.

The Goff company stated that finished cars would consist entirely of rebuilt Ford running gear, including stock flathead V-8 engines.  Other engines could be ordered with installation and cost based on a time and materials scale.  The finished cars were to sell for $1500.  Goff also offered its bodies in kit form for $600 f.o.b. Texarkana.  The kit included the basic body shell, two doors, windshield supports, front-opening hood, and all necessary hardware and trim items.”

Now you can see why George Dammann is one of my research heros and why I’m proud to call him a great friend.

Was It Really a Goff?  Enter Alden Jewell

So….I’ve been focused on finding out more about the Goff because of the name.  But those of you who know me really know that’s just an excuse.  We love research here at Undiscovered Classics and that’s what we do best.  And when I say “we” I mean those that help us with research, documentation, tracking down historical paper and more.  People at their best like Alden Jewell.

I asked Alden about the Goff and he went down to the cellars of information that he has research and stored – where few people and researchers dare to go – and he returned with some gems.  First a brochure, and while the car was designed and built by Chuck Goff, his name wasn’t the name of the car – at least for part of the time.  That is, it wasn’t the “Goff.”  Charles Goff called his car the Texas Skyfire.  Even better than I hoped in finding a car named “Geoff.” 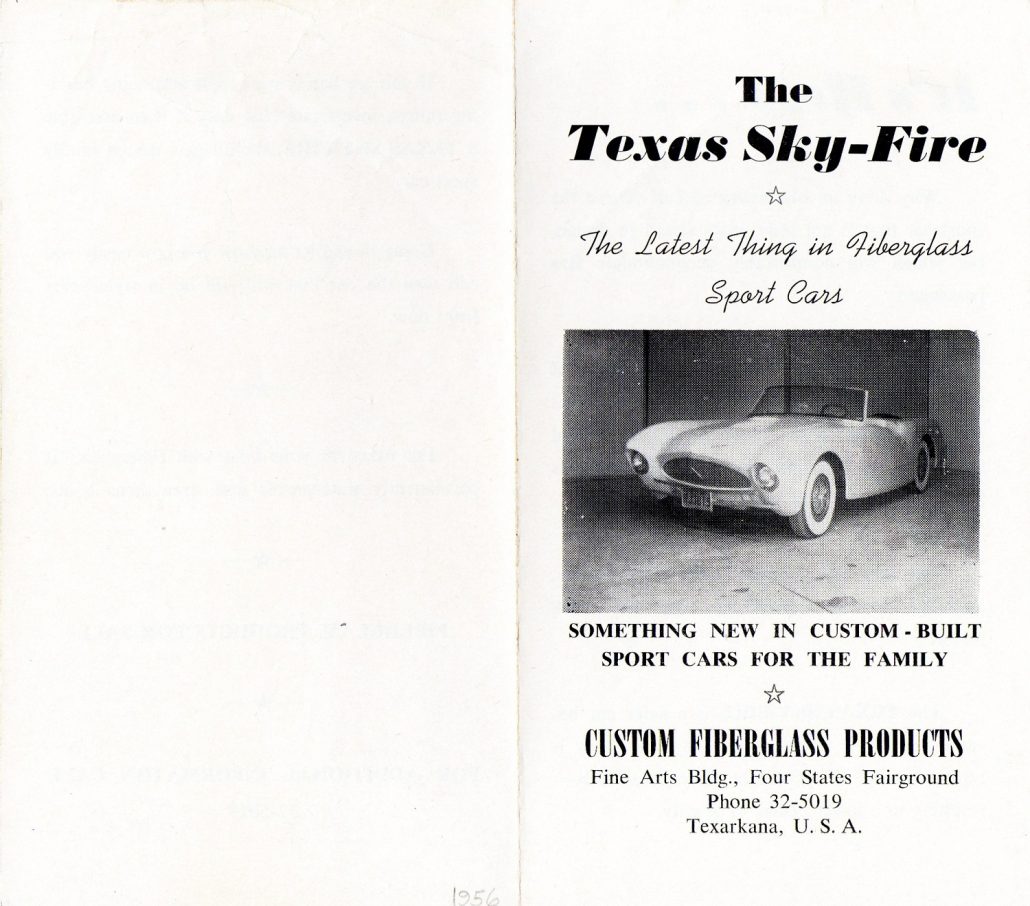 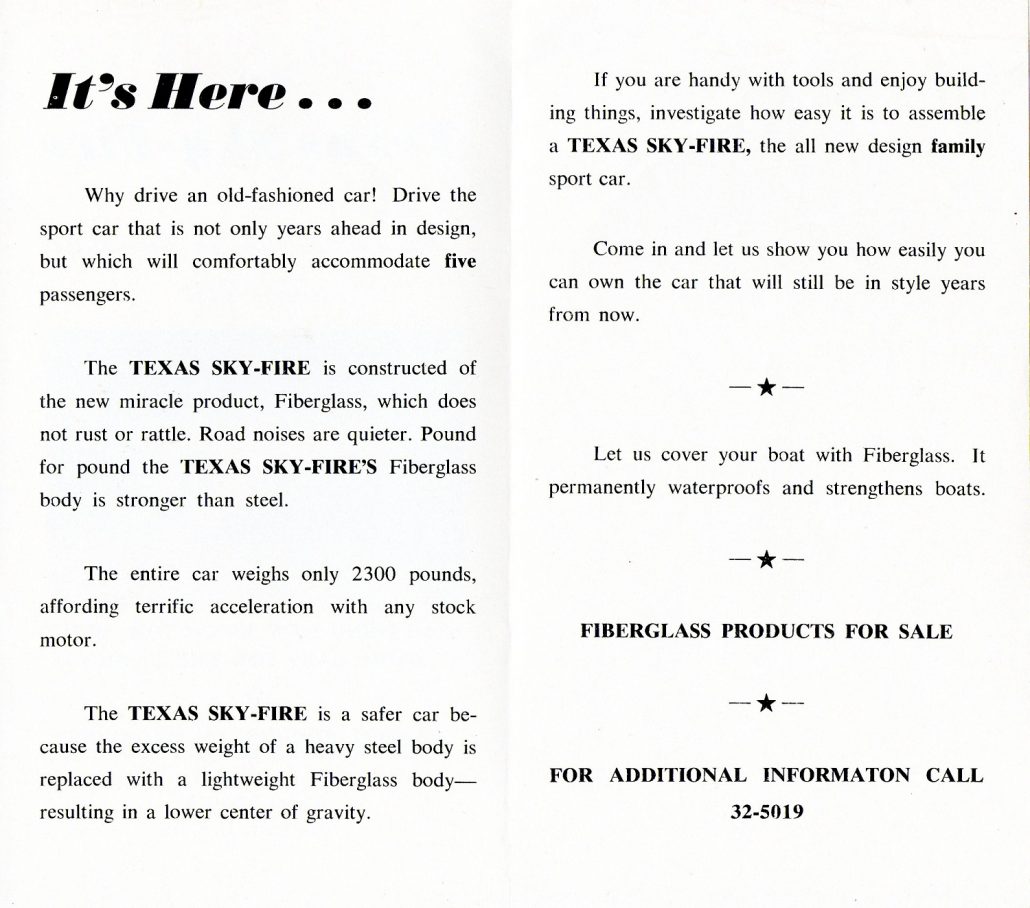 While Alden had a copy (perhaps the only one) about the Texas Skyfire, it was good friend, researcher, Amelia & Pebble Beach Judge Paul Sable, who had found some photos.  He was kind enough to share them with us and these appear below with the backs of one of the photos scanned that shows Chuck Goff’s handwritten notes.  A nice executed and handsome car. 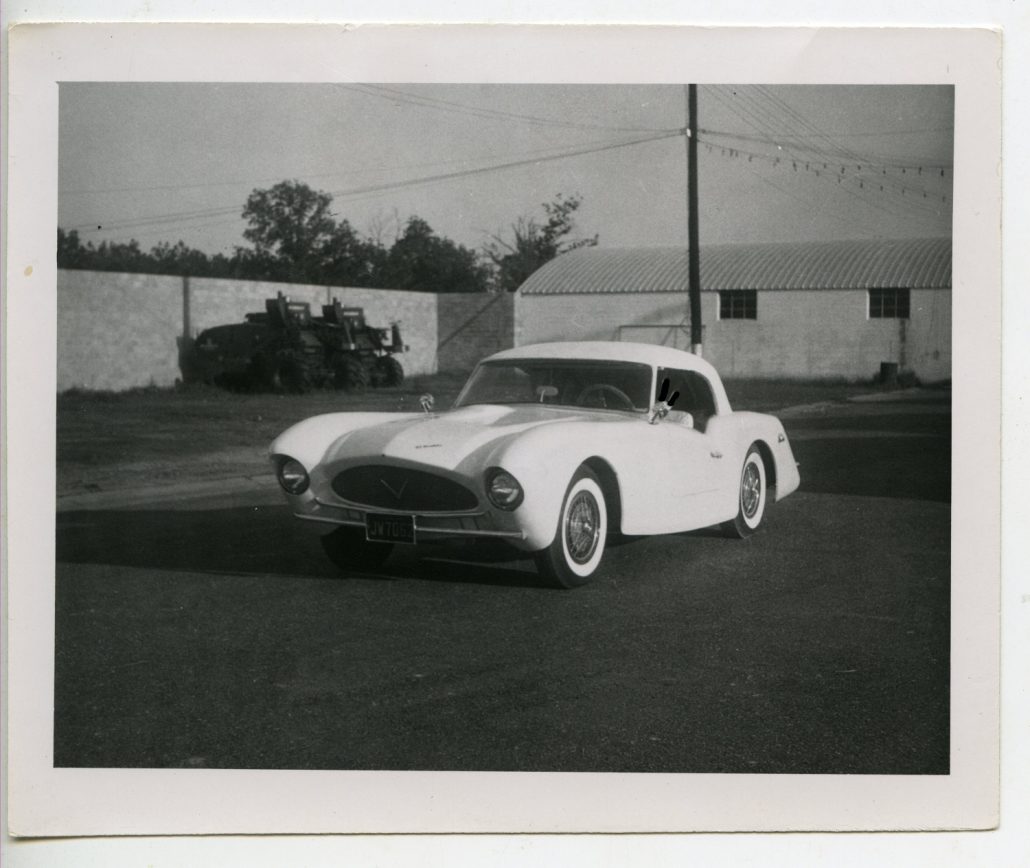 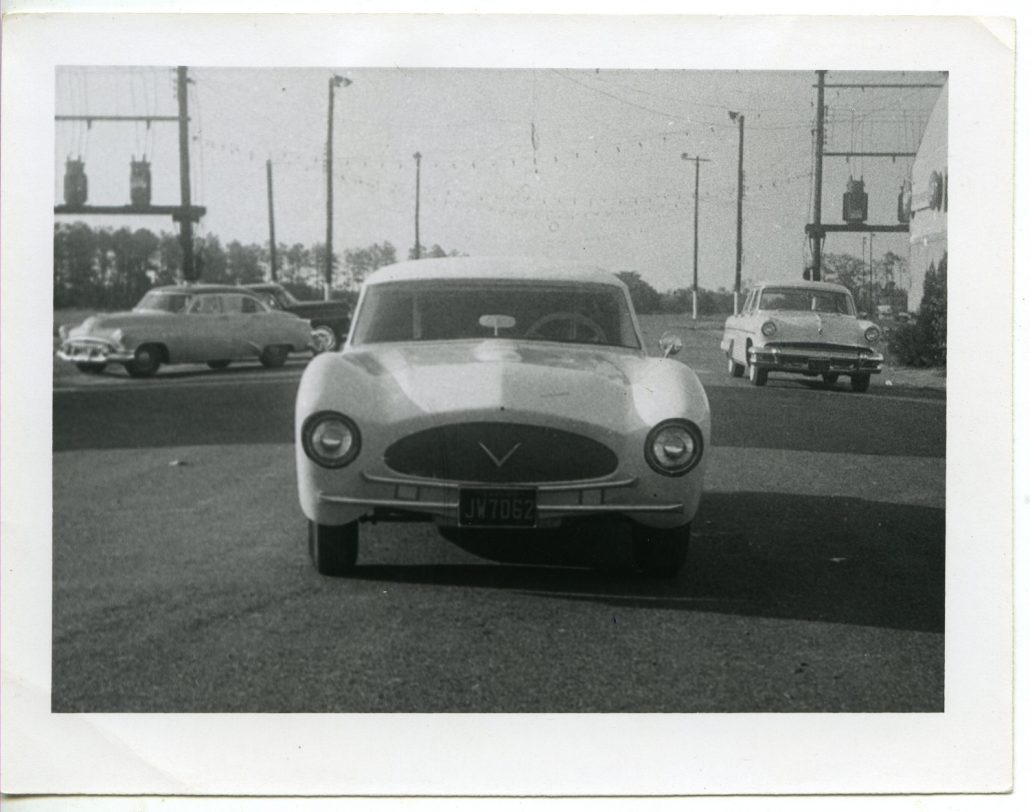 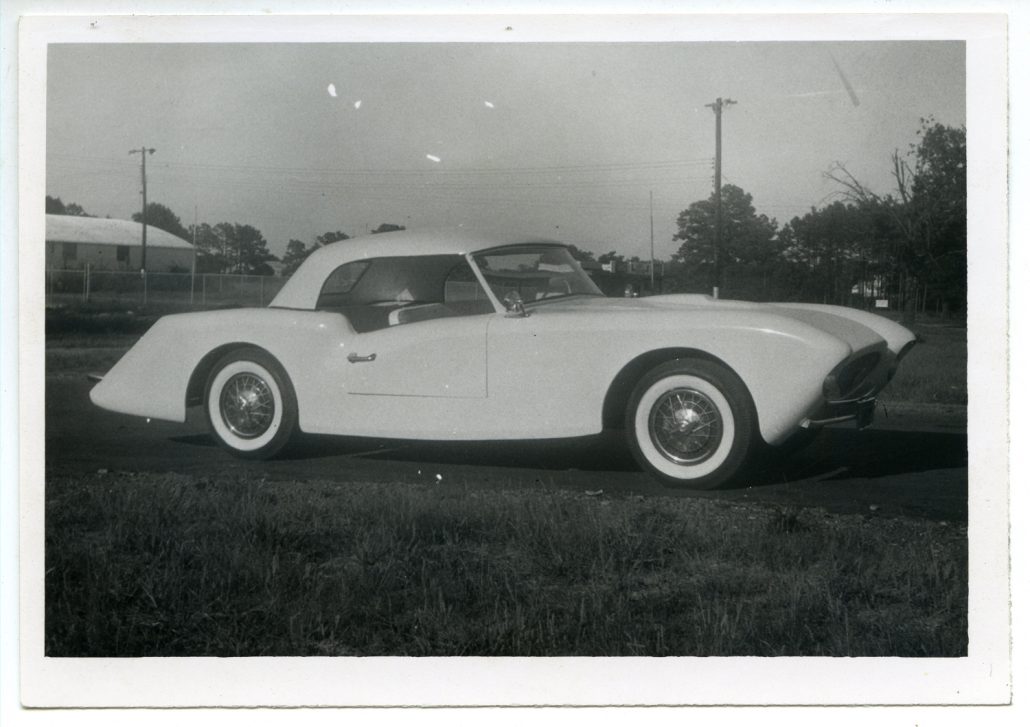 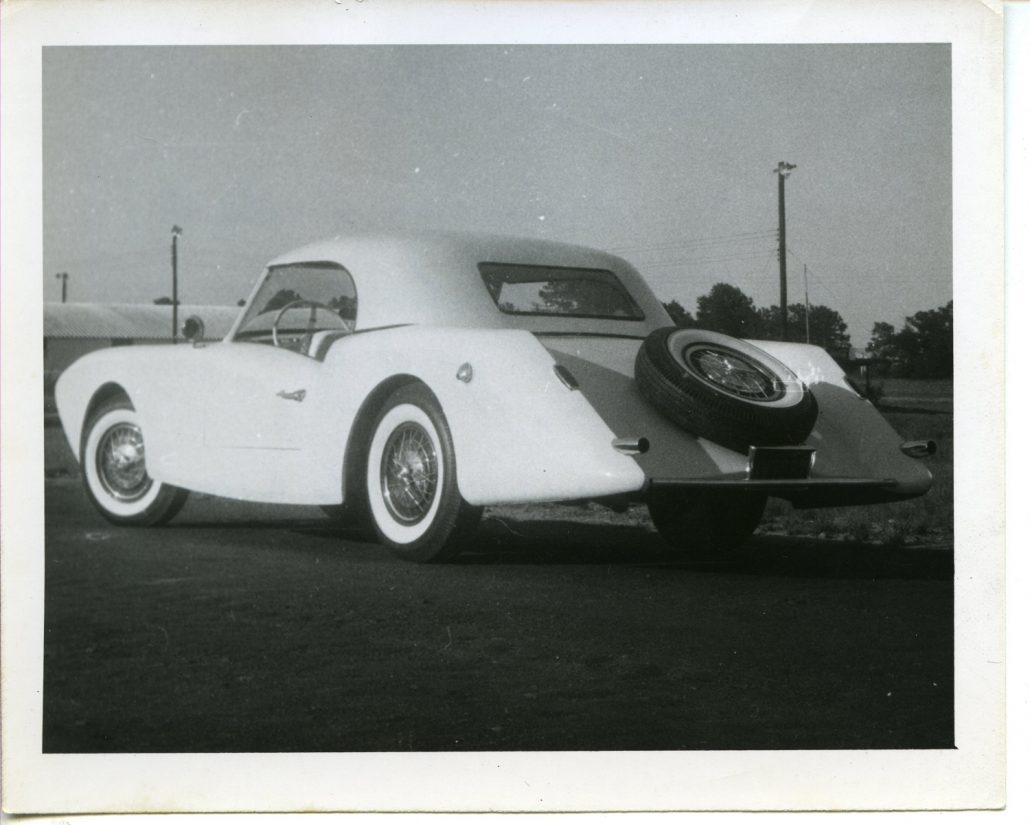 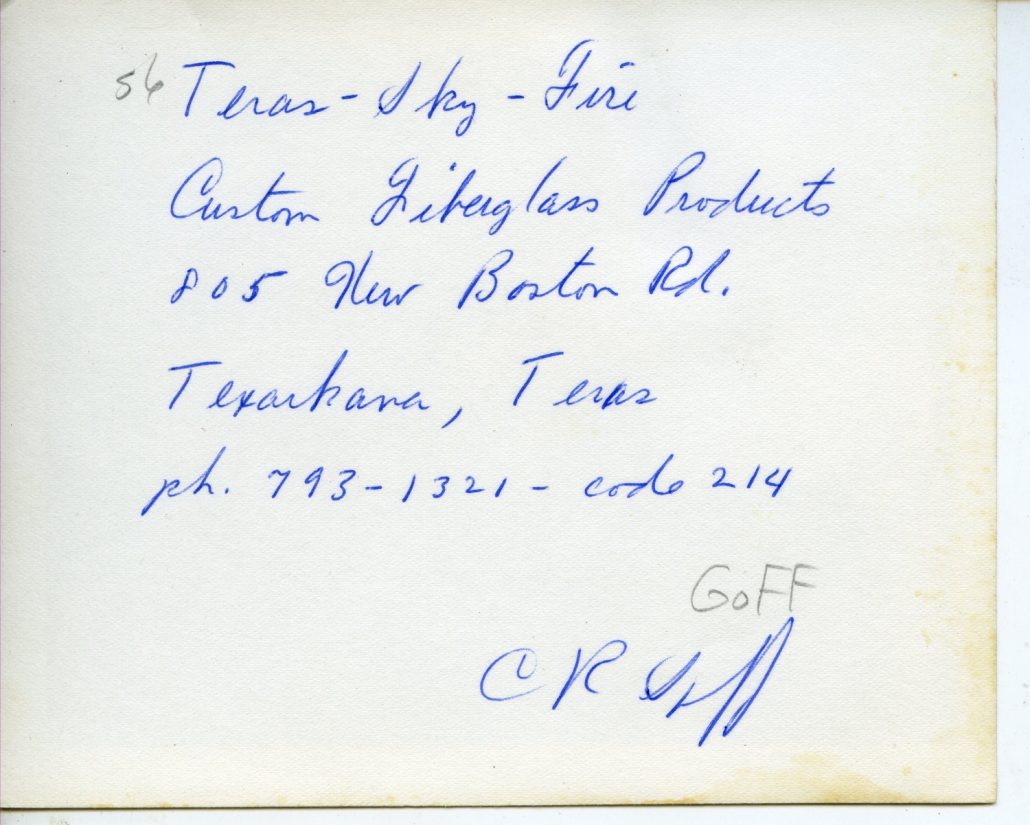 So for years I searched for the Goff – now known to me as the Texas Skyfire and not the “Geoff.”.  I found the Goff family and spoke with them many years ago, and at the time they had little detail on his car.  I met friends of Chuck’s such as Jimmy Blackburn who knew the Goff family and a bit of information on the car too.  But what news do you think I have to share in the next part of the Texas Skyfire adventure?  Stay tuned gang….much more to share 🙂