Undiscovered Classics is many things.  One of its strongest aspects is its connection to history – the designers, the builders and a great appreciation of those with the will to create and bring to reality their dreams.  We celebrate those individuals and what they created in hopes that the memory of what they accomplished inspires others to continue and do the same.  This story is about the best of all these – it’s about Robert “Dan” Daniels and the birth of hot rodding in postwar America. 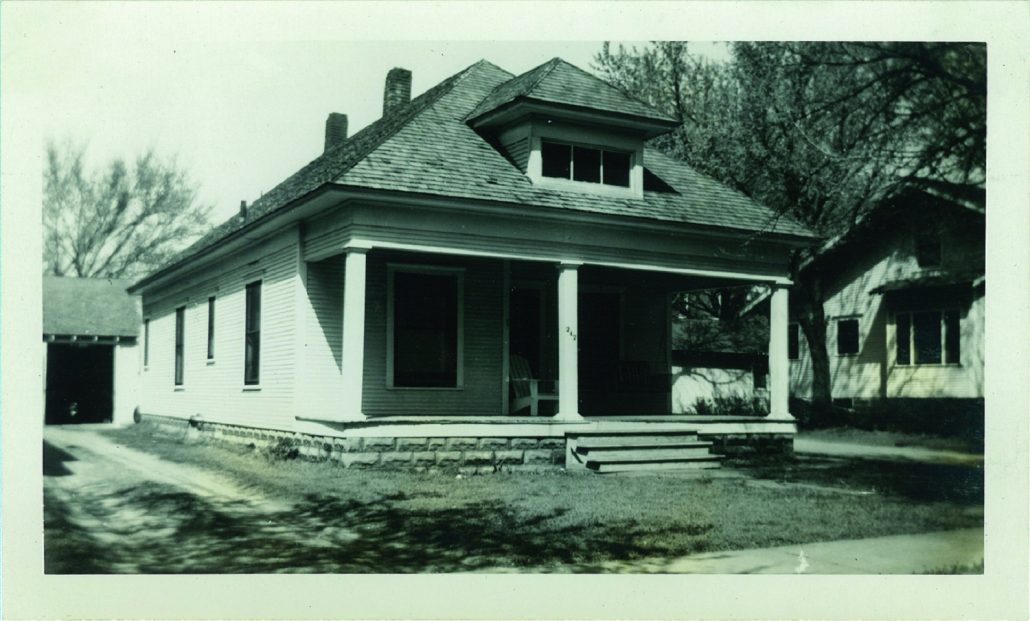 Robert Earl Daniels was born on October 15, 1929.  In his early years he was known as “Bob” but after service in the military his friends called him “Dan.”  He grew up in Wichita, Kansas during the Depression – hard years for America but Dan and his family persevered.  After the war ended, Dan witnessed the excitement around hot rods, streamliners, sports cars and more being touted about in the press and was compelled as were many young men at the time to join in.  And he did with all enthusiasm he could bring..

So where did he learn about hot rods as a teenager in the 1940s?  Well….it was both easy and hard.  You couldn’t read about hot rods in automobile magazines – these wouldn’t start until after the war.  The first of these postwar magazines was “Speed Age” which started in May, 1947 – the second was Road & Track in June, 1947.  Hot Rod magazine would start later with its first issue being printed in January, 1948. 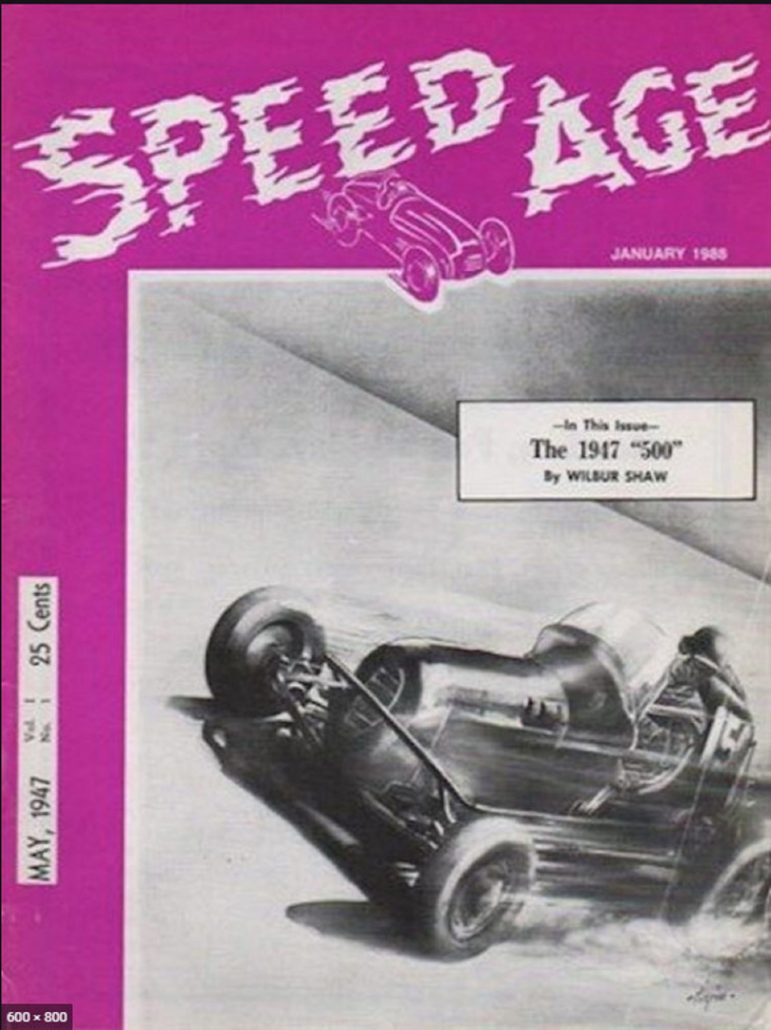 America’s First Postwar Automobile Magazine – Speed Age. This is the cover of their inaugural issue in May, 1947.

Interested young men like Dan would have learned about hot rods, dry lakes racing and more via the popular magazines at the time which featured articles about automobiles such as Mechanix Illustrated, Popular Science, Popular Mechanics – even Life Magazine ran a few stories about hot rods and racing in America.  But most magazine stories would have been about what was happening on the west coast of America, and perhaps some about the east coast.  Few if any would have been about mid-America and Dan was right in the middle of the USA – Kansas.  And wouldn’t you know it.  Dan subscribed to both Hot Rod and Speed Age magazines, and their family still has his collection of both – each going back to issue #1.

Dan’s first hot rod was pretty cool, and he finished it around 1947.  It was a coupe – originally a 1931 5 window Ford coupe with two of the windows filled in.  But Dan didn’t build the body or mount it on a modified frame.  Dan found the car for sale in Wichita being advertised as having been built in California and brought to the midwest.  And it may or may not have had a motor.  Either way, Dan had specific plans for the drivetrain – motor or now motor. 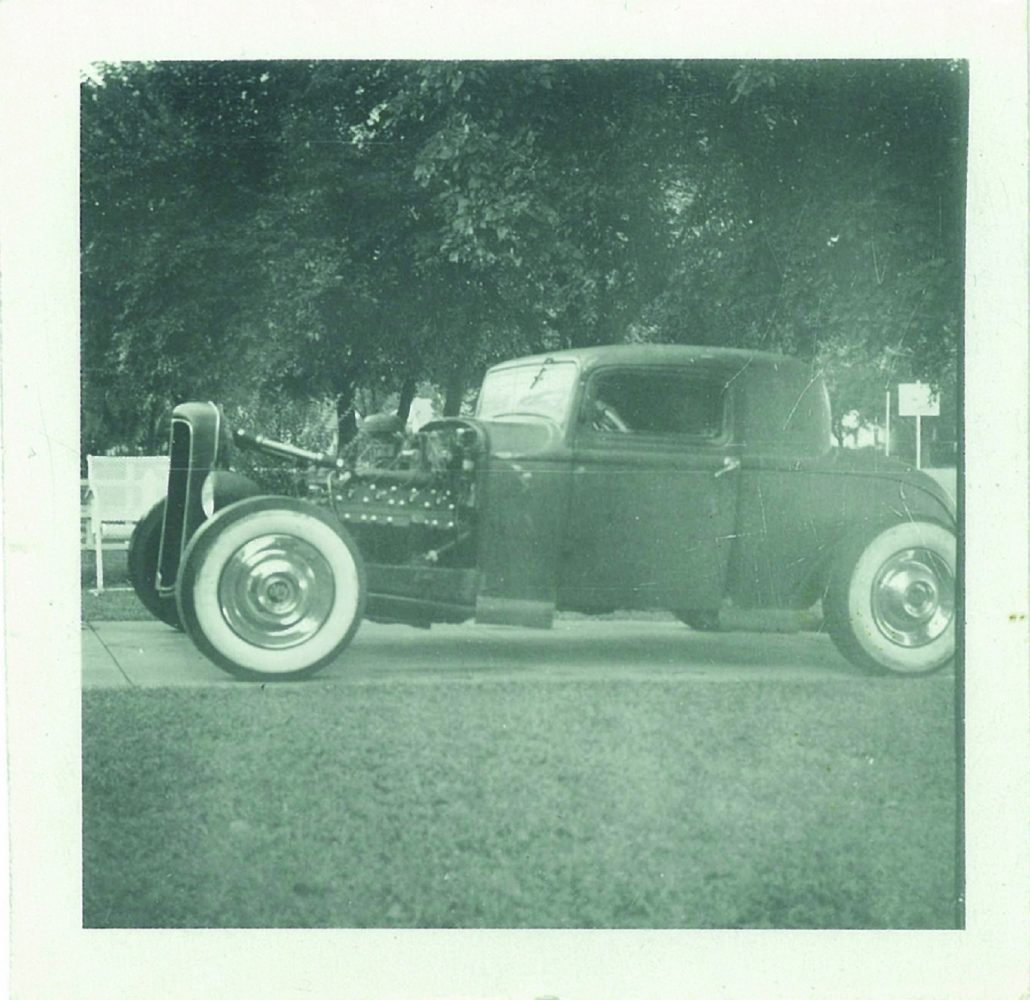 Dan bought a badly wrecked 1941 Cadillac and put the power to good use.  He broke the mold of what most people were using as power back then which was Ford.  He wanted power at an affordable price.  His choice was Cadillac and the finished hot rod must have generated quite a sound – all 346 cubic inches of it.  Vroom…..! 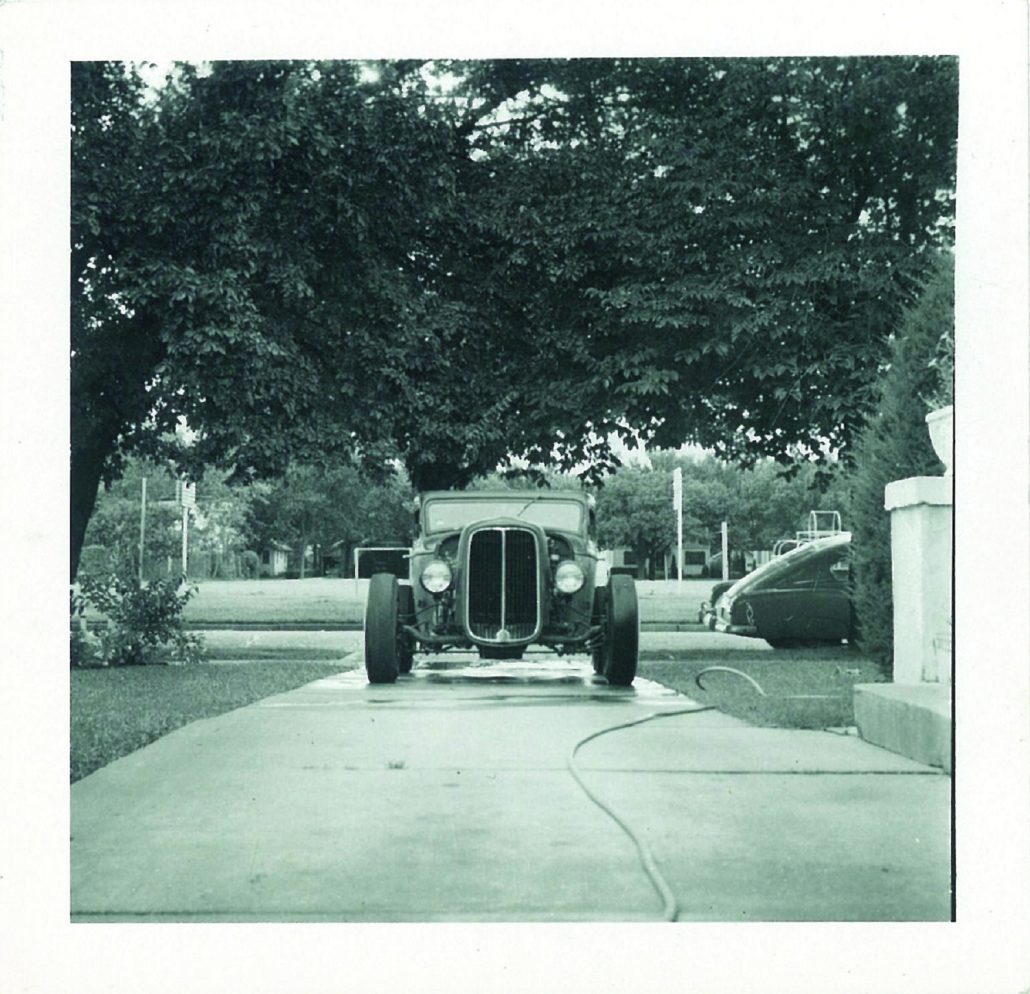 The Daniels family remembers their father sharing stories of this car and how it drove.  While fast, Dan always wanted to strengthen the Ford chassis.  It needed strengthening to properly hold all that power, and he always intended to box in the C-channel frame but never did.  He sold his hot rod not long after completing it, and left it to his friend who bought it to make that improvement.  Dan had other things on his mind.  He wanted to build something unique.  Something he could call his own. 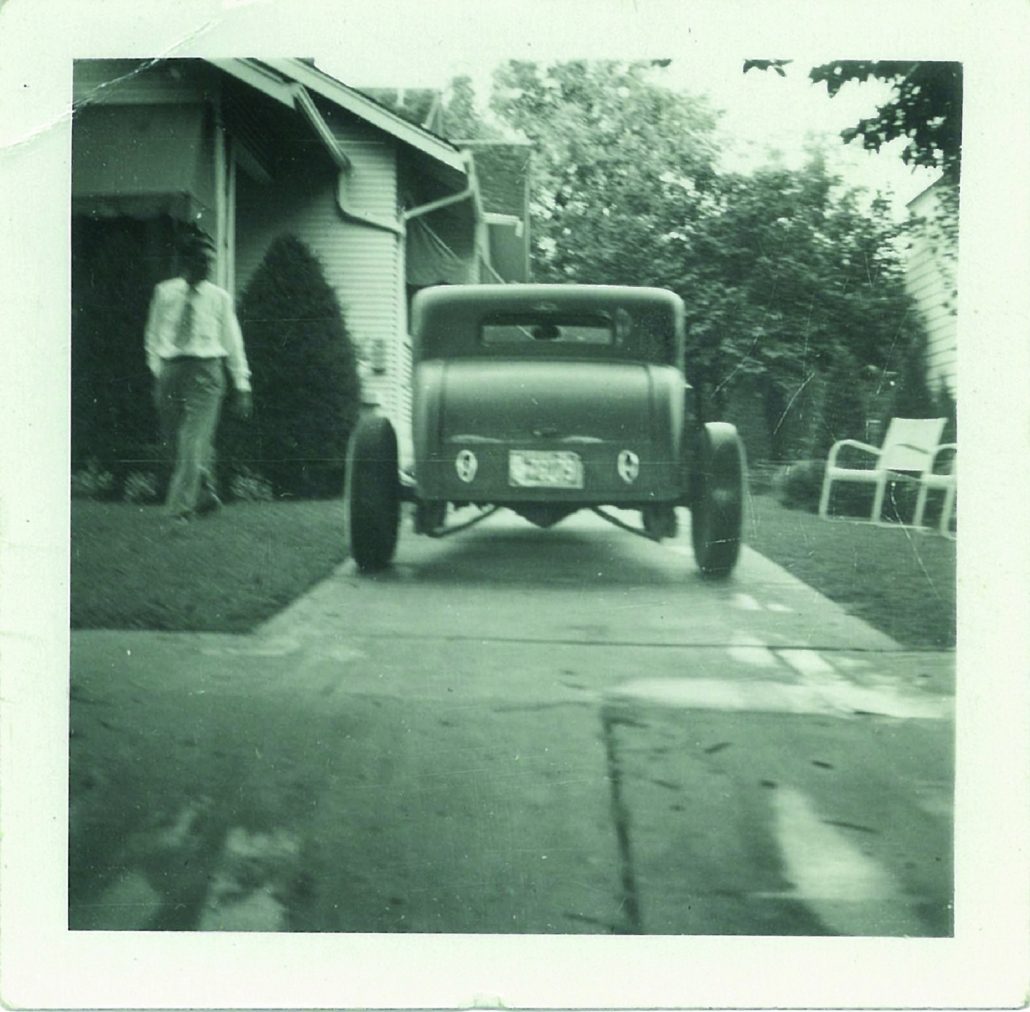 In 1948 Dan turned 19 years old.  His family certainly remembers that he shared his love for hot rods through Hot Rod magazine and other such publications, and the timing could not have been better. Hot Rod magazine showed what young men were building, and he wanted to build something that was just as special.

And while Hot Rod Magazine mostly showed cars from the west coast and Speed Age from the east, Dan was going to build something from the midwest.  He was certainly one of the first if not the first to do so.  Hot Rod magazine would later call his speedster “Midwestern ingenuity at its best.” 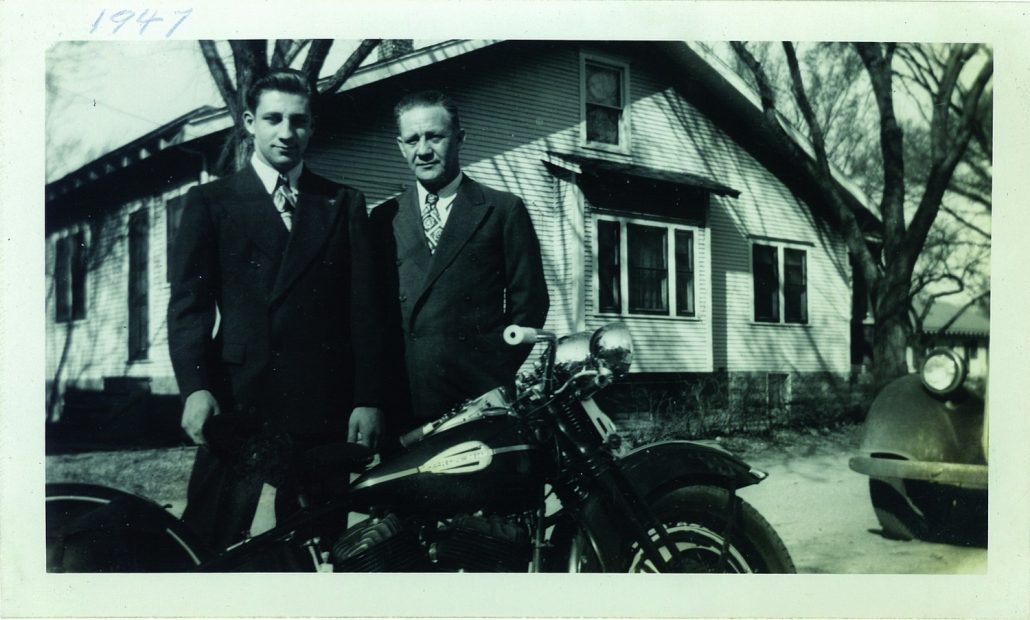 Dan Daniels with his father Clarence Daniels in 1947. More about the bike in the future.

Sometime in 1948 Dan began his project – and he would do so with his father (Clarence E. Daniels).  He had just sold his Cadillac powered hot rod to his friend H.V. Chapin and was set to go.  He had wanted to build something different from others and he did.  The body, grille, grille shell – even the windshield posts were all hand built by Dan and his father in just sixteen months.  By late spring in 1949 the car was finished – and Hot Rod magazine noticed.

Let’s let Hot Rod Magazine tell the story themselves – straight from the July, 1950 article.  To make this easier to read, I’ve shared the caption photos from the magazine below.  For those of you wanting to see the original article as it appeared in the magazine – click here. 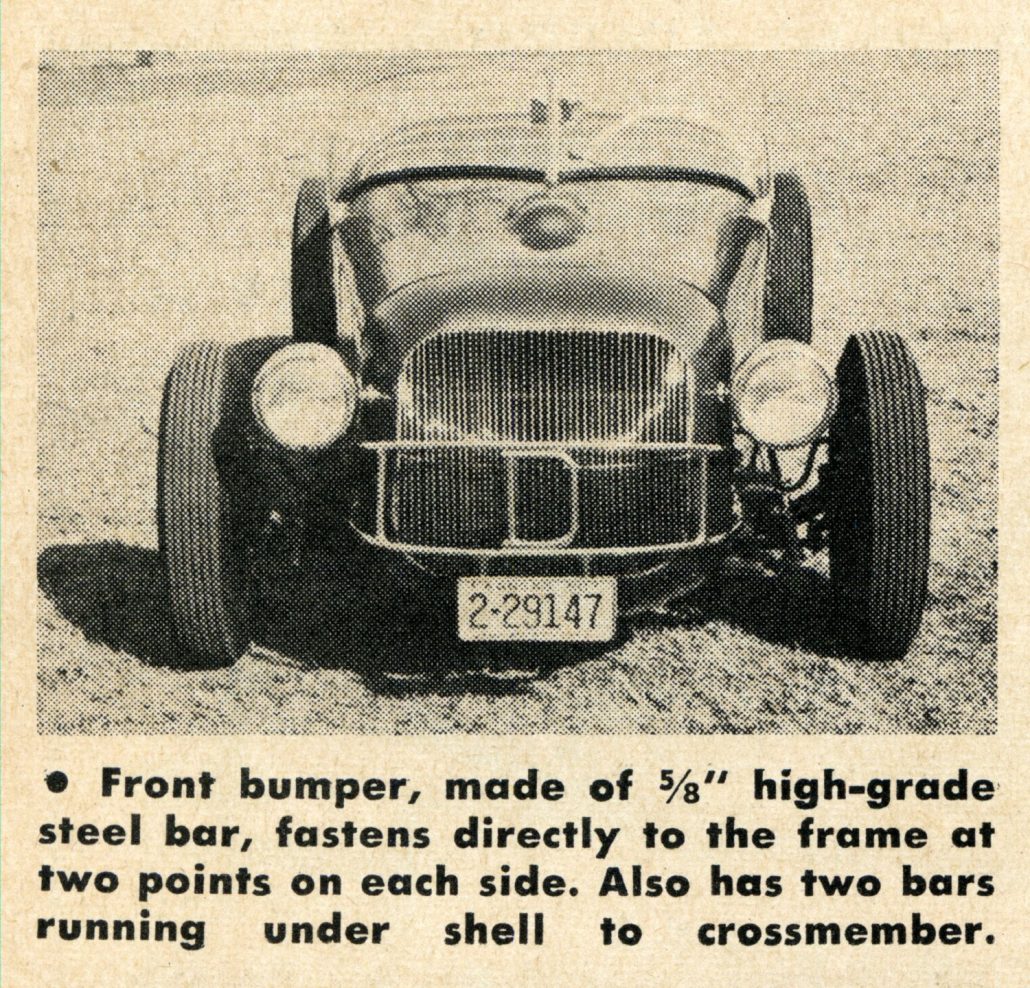 “Although Kansas is commonly thought of as the Sunflower State and is famed as the Wheat State, there are many other products in which it excels.  An outstanding example of midwestern ingenuity is displayed in the sleek street roadster which was built by Robert E. Daniels of Wichita, who with the help of his father, completed the entire car in sixteen months, working evenings and weekends.

Most of the car’s construction was accomplished the hard way, all smoothing and polishing of metal parts being done without the benefit of the usual special power equipment.  The basic chassis was built of Ford component parts, using stock suspension system on front and rear with late model hydraulic brakes. 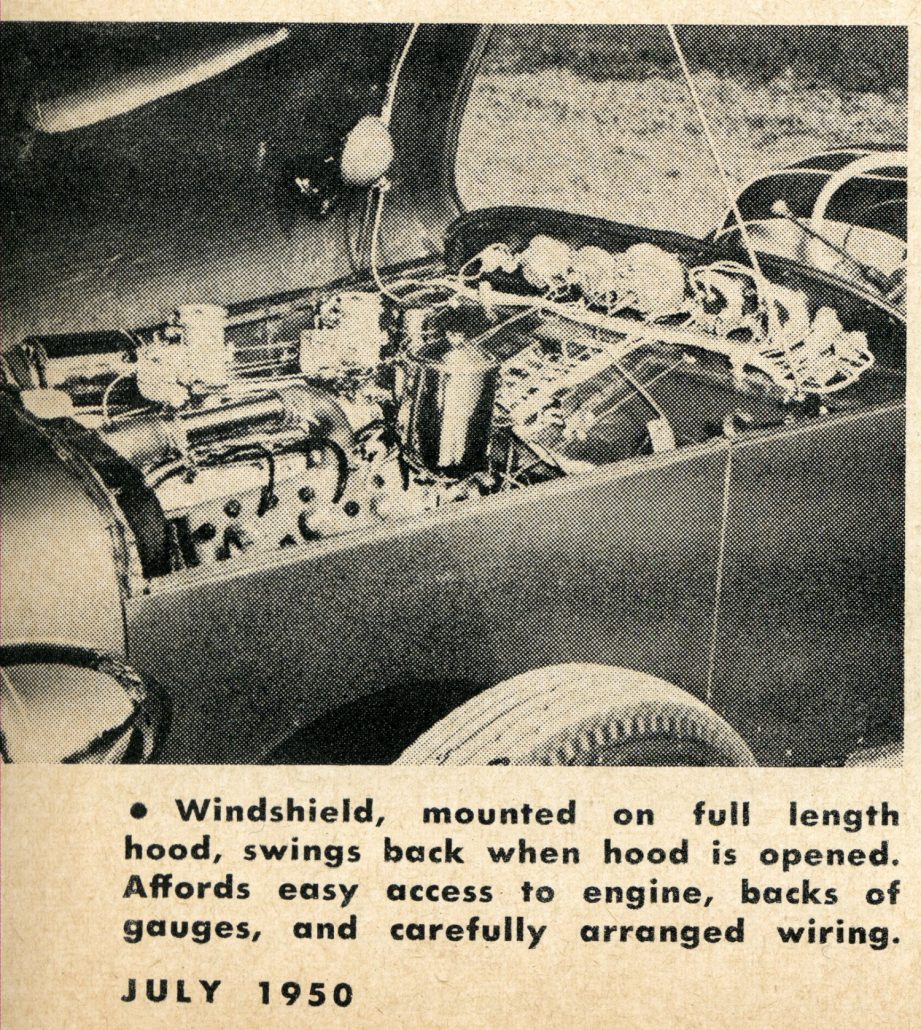 The 1941 Ford transmission, with column shift, has been fitted with 1948 Lincoln gears.  A Columbia overdrive unit, used with the 3.78 rear end, gives a final drive high ratio of 2.72:1.  The body, designed and built by Daniels, was fashioned of sheet steel which was formed in sections and welded into a one-piece unit.  The radiator shell was also made of hand-formed flat stock and its grille was made of 3/16 inch steel rods welded into a framework made out of ½ inch strap iron.

Total weight of the car, ready to run, is 2,360 pounds.  The wheelbase is 114 inches and overall height, not including windshield, is 37.5 inches.  Although built close to the ground, the car has a road clearance of 7.5 inches, which is adequate for normal driving usage.  Tire sizes are 5.50×16 on the front wheels and 6.50×16 on the rear.  The owner intends to construct special small independent fenders, to cover all four wheels which will improve the cars usefulness in wet weather, or on bad roads. 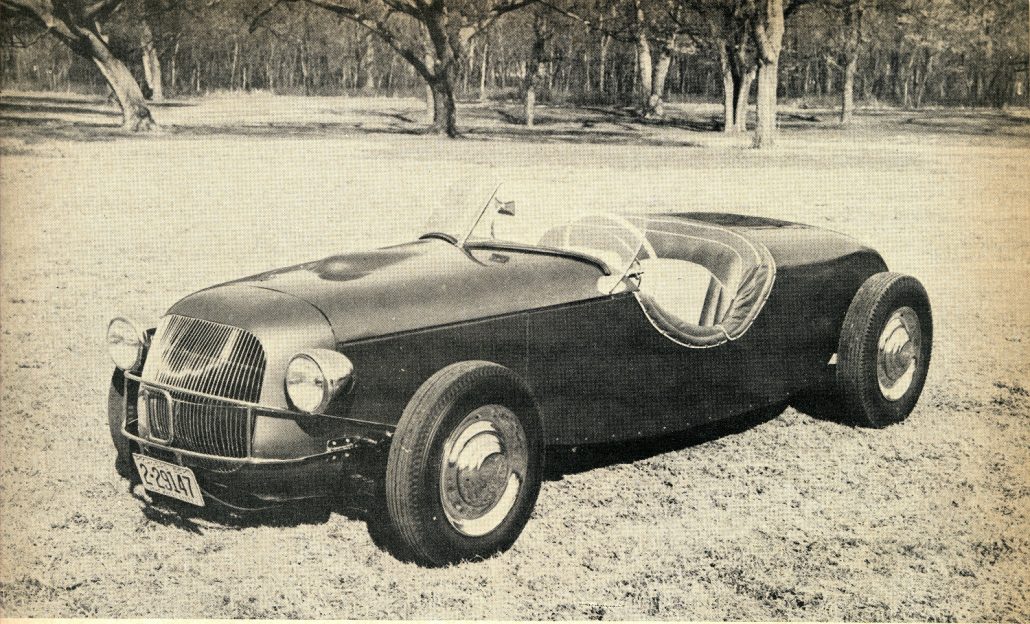 The engine is a 1948 stock Mercury to which have been added an Edelbrock Super manifold with dual carburetors and an Edelbrock aluminum flywheel.  Mr. Daniels plans to install special heads, camshaft, pistons and other equipment in the near future.  The generator, oil filter, crankcase breather, voltage regulator, light relay, fuel lines, linkage and various other engine parts have been chrome plated.

A new 1948 Chrysler New Yorker radiator, on which three inches have been cut from each side so as to fit between the frame rails, provides efficient cooling at low and high speeds without the use of a fan.  The total coolant capacity is 29 quarts. 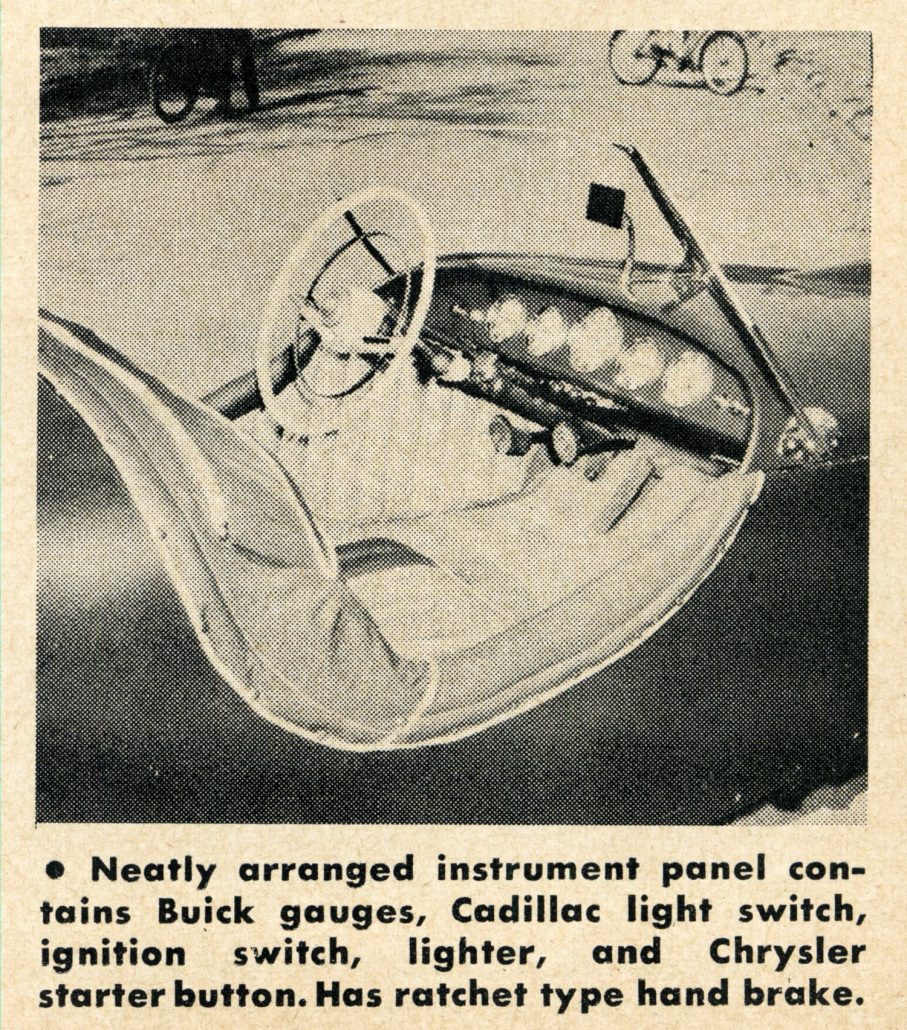 Floorboards of steel, running from front to back, also serve as a belly pan and have removable panels for easy access to car maintenance.  Hood size panels are secured to the shell and cowl by the use of piano hinges with fasteners which tap into the frame.  The windshield brackets were handmade of 1/8 inch steel plate and steel channel.  The sections were welded together, filled with bronze, hand polished and chrome plated.  The shield itself is made of ¼ inch Plexiglas.

Finished in blue lacquer, the car is pleasingly set off by a limited amount of outside accessories, all of which are chromed.  For all-around appearance, neatness and general appeal, this Kansas-built hot rod would be an eye-catcher in any part of the world. 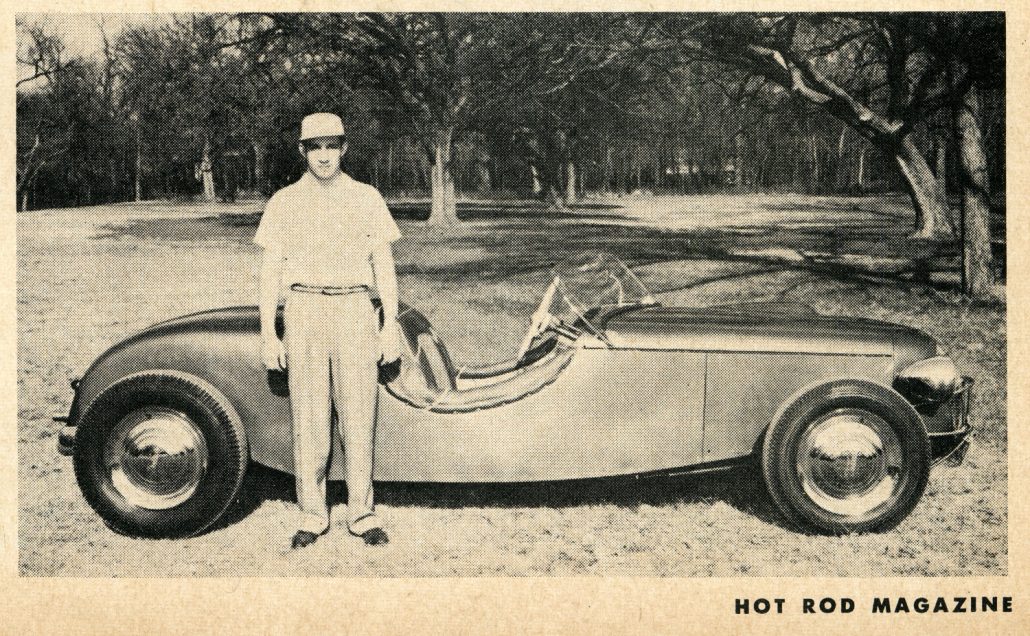 Soon after Dan had finished his car, he and his friends heard about the inaugural run of Bonneville Speed Week in 1949.  As he told the story to his family in Dan’s own words…

What an adventure that must have been for all of them.  And to be there in the first year for Bonneville.  I look forward to seeing the photos the family has from this trip in the future.  In the meantime, here’s one they shared with me below. 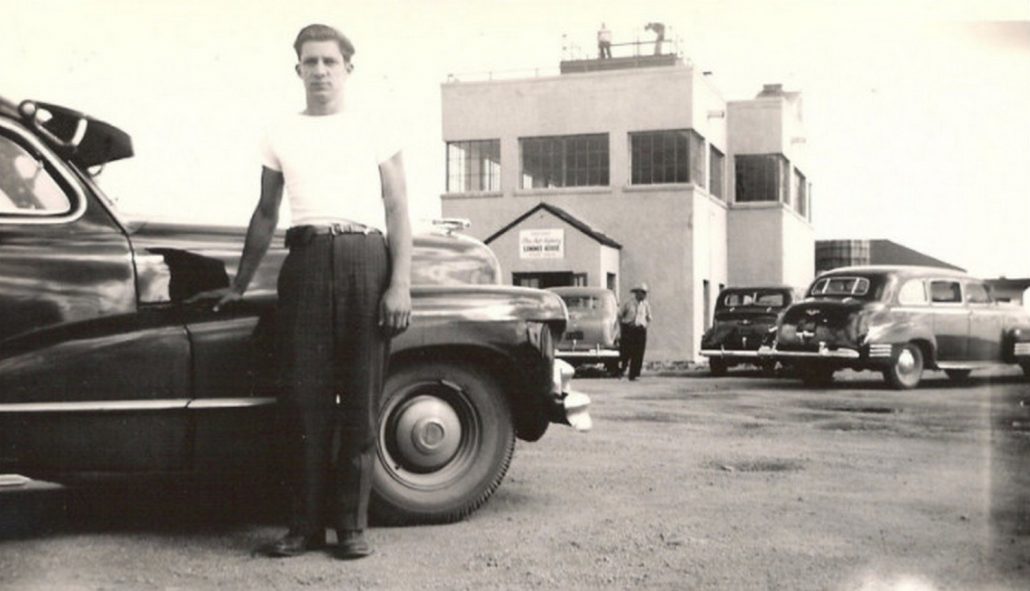 Dan Daniels at Bonneville in 1949

Off For Military Service

Daniels enlisted in the U.S. Air Force and shipped out (flew out?) on October 5th, 1950 as a Basic Airman.  Knowing that he would be gone for around 4 years he felt it best to sell his hot rod before he left.  But think about his experiences by 1950:

Not a bad kick off for a young military man!

His family shared Dan’s thoughts on cars and his hopes for when he got home.  He thought he might be able buy it back and make the changes that he wanted to make – improvements in performance and styling.

Sure enough….four years later in 1954 Daniels was honorably discharged having attained the rank of Master Sargent and set out the search for his hot rod.  And he did his best to search contacting folks who would have known about the car 4 years earlier.  No evidence of it was ever found.

He and his family were hopeful over the years.  Time passed.  The 50s, 60s, 70s….80s, 90s.  And in those intervening years, Daniels had not been idle.  While he never built another car himself, he did still love cars and throughout the years found, restored, sold, bought and enjoyed cars with his wife Willa and his sons Pat and Kelly.  A life well-lived and a car journey well-enjoyed.

So Daniels hot rod appeared to be gone forever – or so we thought.  Enter Joel Driskil.

Joel has been studying and researching sports, race and hot rods of the postwar era since I’ve known him – about 10 years  but probably longer. One of the research projects that Joel has championed concerns a famous race car from the early 50s – the Chuck Manning Special.

And as you’ll learn, Joel seems to never forget anything he sees which is especially useful when poring through vintage car magazines.  But before the rubber meets the road, let’s learn more about the car we’ll be discussing.

Joel Driskil had just finished reviewing the first few years of Hot Rod magazine (1948, 1949, 1950 and beyond) and while many of the cars looked similar – some were very different.  Some more late night research and reading – this time on eBay – and Joel found an interesting car for sale.  Actually it was more a “parts car” than car.  And it had the strangest taillights – something that jogged his memory.  Check out the ebay photo below showing the car and those strange taillights.

And then it hit him – he saw it in a magazine that he was looking through earlier that evening.  It had the same 1942 Buick taillights as the parts car on eBay – not a common choice for any hot rod back then. Here’s a photo from the magazine article of what he remembered.  Could it be??? 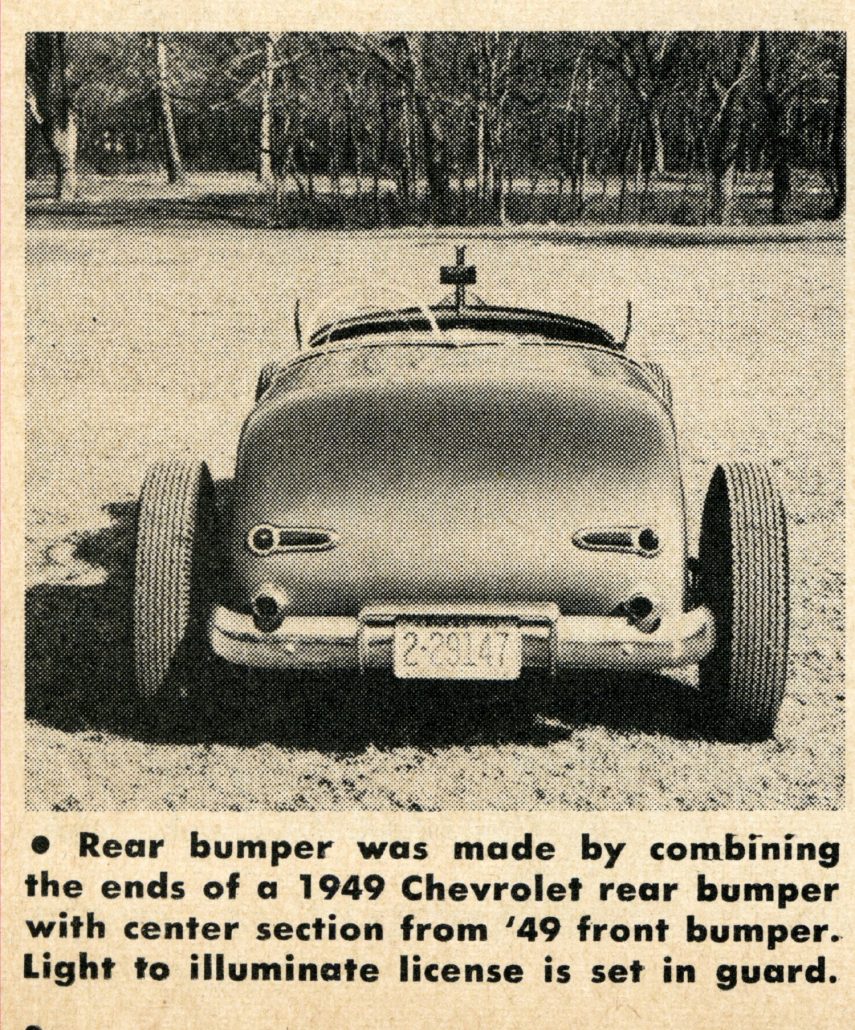 And this is were the latest adventure began for Joel Driskil and Undiscovered Classics.  As you’ll learn others are now part of the same adventure including Nate Bowne and Ralph Smith.  But I’m getting ahead of myself and those stories about Robert “Dan” Daniels 1949 Sunflower State Speedster are for the future.  Something I hope you will enjoy.