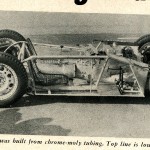 Caption From Article: Low Slung Chassis Was Built From Chrome-Moly Tubing. Top Line Is Lower Than The Wheels.

From looking at the picture above, I’m sure you thought to yourself…”Jaguar C-Type.”

Not so fast gang….its much much better.  And smaller too!

Back in 1954, Kelly Buchanan and college friend Bob Arnt decided to build a sports car to compete in the early sports car racing scene in California.   Although not mentioned in the article, renowned sports car driver Dick Van Laanen, piloted the car, and it appeared on the race circuit in 1954-1955.

As reported in the book, “Vintage American Road Racing Cars: 1950-1970” by Harold Pace and Mark Brinker:

“The car was completed in 1500 man hours at a cost of $900 and was very fast.  It scored an impressive five consecutive top-qualifying times at five different events.”

The future looked bright for this little plastic powerhouse.

I’m in the process of researching this car and the folks involved who built and raced it too.  As such, future articles are planned on this car and its history.  So for now, I thought I would share with you the best article I’ve found on the history of this car and how it was built.  Future articles will build on this story.

So…let’s dive into the article and learn more about one of the prettiest – and best built – fiberglass sports cars of its day.  The Buchanan-Arnt Singer Special. 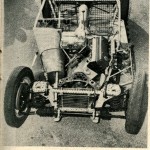 Caption From Article: Front View Shows Angle of Engine and Ruggedness of the Chassis Layout in Hot Singer.

The Singer That’s Not A Sewing Machine:

When a little, tub-like English car called the Singer first came over to this country around ’49 it somewhat justly acquired the reputation of having all the power of the sewing machine of the same name.  Other epithets such as “pop corn machine” and “road louse” were also applied by those whose taste ran to more performance.

Those early models were underpowered.  They handled poorly and rode not at all well.  However, along came 1951 and a number of owners of other makes of small foreign machinery got a jolt.  The despised Singer had grown a whole chestful of hair in a year.  The Singer folks had completely redesigned the engine and the car.

Under the hood of the ’51 model was a 91 cubic-inch single overhead cam engine with more than a little kinship to such doughty power plants as the early-day Miller, the McDowell A, and the new four-barrel Mercedes.  Considerably restricted by almost non-existent exhaust ports and a miniature intake layout integral with the head, the little mill still packed enough punch to romp all over the MG’s and the like. 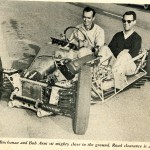 Opened up and given a little of the hot rod treatment, several of these started to shellac class competition all over the place.  The chassis, too, was given a going over with independent but stiff front suspension, better shocks, a slightly longer wheelbase, and more precise steering.  Considering the facts it was only a matter of time until somebody came up with a real full-house job using Singer components, particularly since the cost of the only American 91 incher, the midget Offy, was beyond the means of the average hot rodder wanting to get into this class of competition.

Somebody did.  The somebody was Kelly Buchanan and Bob Arnt, students at Southern California University.

Kelly had been the owner of a venerable and huge Stutz DV-32 powered roadster that had been caught in a fire.  He had raced this monster several times and despite the car’s huge wheelbase, had successfully blown off sundry competition.

This was a nice sort of habit to get into, so after the first, Kelly decided to stuff another car together.  Looking around, he came across a wrecked ’52 Singer at a very reasonable price.  This was to form the basis for a new assault on the competition.

Breaking out the welding set, Kelly and Bob, with considerable help from Pi Kappa  Alpha brothers, started putting a truss-type tubular frame together behind the Pi KA house.  The main tubes were formed of 2 and ½ inch 4130 chome-moly, major support tubes were 1 and 1/8 inch tube and minor trusses of ½ inch tube, all .063 wall thickness.

To the front end, Kelly adapted the suspension from the wrecked Singer together with a Morris Minor rack-and-pinion steering coupled to a U-jointed ’40 Buick steering column.  Swanson-rebuilt 50-50 Gabriel shocks were also installed. 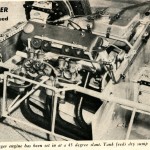 Caption From Article: Souped Singer Engine Has Been Set In At A 45 Degree Slant. Tank Feeds Dry Sump System.

The rear end was equipped with Morris Minor torsion bars (a very inexpensive way to solve the torsion bar problem).  The bars were set laterally, across the chassis, instead of longitudinally as in the Morris.  The rear axle is also from the wrecked Singer.  Kelly also made up a torque reactor, similar to that on the C-type Jaguar, to keep the right rear wheel on the ground.  The whole rig is kept in place by a Panhard rod anti-sway bar, also from a Morris front end.

For brakes, Kelly used the Singer units but equipped them with ’37 Dodge shoes and linings.  The backing plates were not merely drilled but were cut away entirely for the utmost in brake ventilation.  Also used from the Singer were the disc wheels which were so liberally lightened that they made Ernie McAfee’s efforts on his Mexico Siata (Car Craft, March 1954, Holey Terror) look like the work of an anemic corn borer.  Total wheelbase is 84 inches as opposed to the stock length of 91 inches.

Then came the engine.  First the whole works, crank, rods, pistons and flywheel were taken to Vic Edelbrock and balanced both dynamically and statically.  The head was milled .050 of an inch and then given a full port treatment including 30 degree intake valves and 44 degree exhausts.

To accommodate four 1 and 3/32 inch Amal carburetors, scavenged from the burnt Stutz, instead of the usual single carb, Kelly bored four 1 and ½ inch I.D. holes in the head adjacent to the intake ports and through the internal log manifold.  To these he fitted four flanged tubes to hold the Amals.  No balance tube was used.

For valve springs, Triumph motorcycle springs were used in place of the stock Singer units.  To finger the valves a Harman-Collins #6327 track grind cam is used.  This cam has a .335-inch lift with intake opening 19 degrees before top center and closing 63 degrees after bottom dead center.  The exhaust valves are just the opposite, opening at 63 degrees BBDC and closing 19 degrees ATDC. 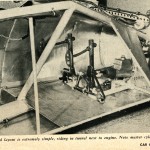 Both cam lobes and rockers are hard faced.  For more compression than the head-milling allowed (.070 is maximum recommended for the Singer) Kelly also milled the surface of the block .075 of an inch.  A standard Singer Lucas ignition with a heavy duty coil is used.

To achieve a low hood line, the engine was rotated approximately 45 degrees on the bell-housing in a similar manner to that of the Kurtis 500 B series cars and the Mercedes 300 SL.  This necessitated the use of a dry sump oil system.  For a scavenger pump to draw oil out of the slanted sump, a Chrysler pump is externally mounted.  This unit forces the oil through a cooler made from a refrigerator coil and an aircraft filter to the main reservoir made out of a two-gallon de-icer tank. From there, the Singer pump pulls the oil to the engine.

The interior of the car is as stark as it can be made.  Due to the cant of the engine, there is no leg room for the hypothetical passenger that sports competition cars are supposed to be able to carry.  Pedals for the driver are housed in a tunnel alongside the engine.  The transmission is stock and the gear lever sits at the driver’s left elbow between the two bucket seats that were made from Eames garden chairs.

Total cost of the car, including the fiberglass miniature C-type Jag body, is $900 although over 1500 spare hours have been spent on the bear. With a weight of under 1200 pounds, the car has almost phenomenal acceleration for a power plant of that size.  Definitely, this Singer is no sewing machine.

This was one well-built car, and would be a marvel to find today.

As I mentioned before, I’m in the process of researching more about the car and the folks who built it and will have new information to share in the near future.  In the meantime, here’s a short video clip of the Singer Special at speed with legendary driver Dick Van Laanen at the wheel.  The car is seen at the very beginning of the video – and just for a few seconds – so watch closely.