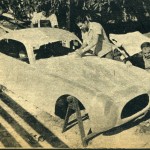 In This Image, You Can Clearly See Roy Kinch At The Front And Bill Burke At The Back. I’m Still Working On Who The Other Two Folks Are, But One Of Them Should Be Mickey Thompson.

I love searching through old magazines.  That’s where all the “good stuff” is.  But collecting is a disease – once you get thru the basics like Road & Track and Motor Trend Magazines – you start looking for the rare stuff.  Like “Auto Sport Review.”

This was a magazine published for about 2 years from January 1952 thru December 1953.  It was based in New York, and covered many topics not discussed in other magazines.  And…when it did cover similar topics, it usually discussed new aspects and showed unique pictures not seen elsewhere.

Collecting is really a disease, but lots of fun too.  Especially when it pays off.  Like now.

This is just a one-page article, but shows 4 great pictures and contains some excellent information too.  Let’s review the article:

This fiberglass coupe, designed by Roy A. Kinch of  Alhambra, California, will fit any 94 or 96 inch sports car chassis.  As it comes from the mold in picture 1, the bare shell weighs only 185 pounds including steel tube reinforcement around the window posts, doors, and front and rear ends.  With windows, grille, lights, and other equipment, it weighs 250 pounds. 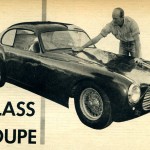 Picture 2 shows the second step on the production line that will produce these bodies for only $685.  The one piece shell is sanded to a glass-like finish, ready for painting with any standard automobile lacquer or enamel.

Three men easily drop the sanded body over an MG chassis fitted with a v8-60 in picture three.  Between step 3 and the whistle stopper being polished by owner Bill Burke at the top of the page lies the painfully laborious detail work which includes cutting out and fitting lights, doors, windows and grille as well as the interior finishing.  The $685 price tag does not include installation.

The author did a nice job of numbering the pictures and discussing each one in detail.  Let’s talk about each of these pictures:

Lead Picture With Bill Burke:   In conversations with Bill, he tells me this was his personal car, and that it was “Burple” in color.  Bill was famous for painting cars “purple,” and after awhile people called this color “Bill Burke Purple” or “Burple.”   This car used a Ford Flathead V8 60 engine/drivetrain (also shown in picture 3).

Picture 1:  In the first picture, you can see that the Allied Swallow is built as a one-piece body, and that doors, hood, and trunk are cut into the body as needed.  You can make out reinforced areas that are shown underneath the body in the shape or outline of the hood.  You can also see the fiber-glassed firewall that Bill included in all Allied bodies produced. 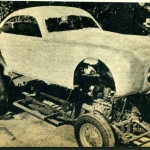 I Bet The Guys In This Picture Are Saying To Themselves, “Great! 500 Hours Down And Just 1500 More Hours To Go!”

What’s also neat about this picture is the rough edges that are still shown on the body.  After the fiberglass body cured, these areas would always have to be trimmed which meant sand, sand, sand.  Bill Burke is shown in the center of the picture.  One of the two remaining guys should be Mickey Thompson, but the third person is a mystery (it’s not Roy Kinch who is almost always shown in his wheelchair).

Picture 2:  Here all 4 guys are shown.  Bill Burke is at the rear passenger side of the car, and Roy Kinch (in wheelchair) is at front driver’s side.  Mickey Thompson should be one of the two remaining guys, with “fourth” mystery person in picture too.

Notice that the headlight buckets are not yet cut – nor are the doors.  I can see the outline of the hood and perhaps these are “scribe” lines where the body should be cut.  That would make sense, and is exactly what Glasspar, Victress, and other manufacturers did.

Picture 3:  Here are the two guys shown lifting the body onto the modified MG chassis with Ford Flathead V8 60 drivetrain.  I’d like to think that one of these 2 guys is Mickey Thompson, but the more that I look at them – neither looks like him.  Those of you with “eagle eyes” can see Burke’s face thru the front window. 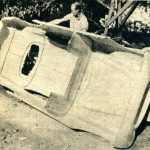 If You Spend Some Time Inspecting This Picture Closely, You’ll See That Burke And His Team Really Put Alot Of Effort Into Building The Bodies.

It’s kind of funny how the article finishes.  It alludes to the massive amount of time needed to complete the car from step/picture 3 forward by stating that all that remains is:

“the painfully laborious detail work which includes cutting out and fitting lights, doors, windows (roll-up windows too – gang), and grille as well as the interior finishing.”

The last sentence of the article says:

“The $685 price tag does not include installation.”

Remember gang…the average fiberglass bodied sports car took 2000 hours to complete – as discussed in articles in the 1950’s.  That’s 50 weeks of 40 hour weeks (you do get 2 weeks off for vacation with this estimate of hours, though).

So….the article is an excellent review for what could be accomplished on your own – back in the day.  It shows us some new pictures, and gets us one step closer to appreciating the hard work it took to complete one of these cars back in the 1950’s.  Not for the faint of heart, gang! 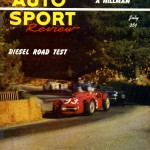 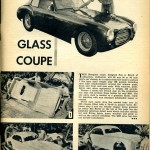 If You Spend Some Time Inspecting This Picture Closely, You’ll See That Burke And His Team Really Put Alot Of Effort Into Building The Bodies. The Body Was Far From Ready After Initially Pulling From The Mold, and Much Work From the Firewall to Steel Reinforement Barw Were Installed.

In This Image, You Can Clearly See Roy Kinch At The Front And Bill Burke At The Back. I’m Still Working On Who The Other Two Folks Are, But One Of Them Should Be Mickey Thompson.

I Bet The Guys In This Picture Are Saying To Themselves, “Great! 500 Hours Down And Just 1500 More Hours To Go!” 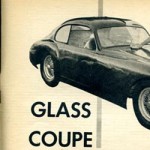