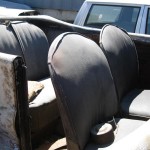 A Four-Passenger Setup For A Fiberglass Car Is Extremely Unusual – No Matter When It Was Built.

It’s Superbowl Sunday February 2011 and Dennis Blietz stopped over at my house – all the way from California.   So of course, I thought I could sneak in another “Forgotten Fiberglass” story before kick-off time.  Let’s see if this actually happens..

No….Dennis didn’t come here just to see me.  He’s in the Tampa Bay area for a job he’s working on.  But  I think he came by because he heard how much I like food.  Little did he know that I’ve been on a diet and have lost 50 lbs (nearly) since August 1st, 2010 – thanks to the efforts of my coach and good friend Guy Dirkin.

So….to make up for the lack of “food orientation” that is no longer part of my house, I thought I would honor Dennis’ visit by writing about an interesting fiberglass car that he bought within the past year.  It was originally posted on the Jalopy Journal / HAMB board so some of you may have seen this before.

I’ve challenged him to come up with a name for it, and he’s still puzzling that over.  In the meantime, I’ll call it “The Dennis Blietz Special” – a new “Mysterion” to add to our group.

Exploring the Mystery of the Dennis’ Blietz “Mysterion”

This is an unusual mystery car for you gang – and one that probably has an interesting history – if only we could track back to its original owner and builder.  So… let’s take a look at what we’ve got and see if anyone knows more about this car. 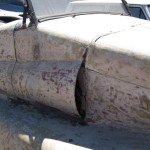 * Workmanship:  All details of the car seem very well thought out and executed.  The method of fiberglass construction, the metal bracing used for the body and supports used for doors, hoods, and trunk all show careful design and construction.  Someone spent a lot of time putting this car together!

* Method of Fiberglass Construction:  Close inspection of the body reveals fiberglass cloth as the method of “laying up” the body.  A chopper gun was not used, so an early method for body construction was followed – reinforcing the fact that it may be an early fiberglass car.

* Chassis:  This is a 1936 Hudson chassis and engine/transmission.  The car still wears its original wheels and I’ve asked Dennis, when he gets back to California, to measure the wheelbase for us (not sure if it was originally a 2 door, 4 door, etc…) 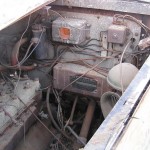 Here’s A Partial View Of The 1936 Hudson Mechanicals – There’s Certainly Alot Of Gadgetry Going On At The Firewall!

* Engine/Transmission:  As noted above, these are from a 1936 Hudson

* Carburetion: Dennis notes that it has 4 vacuum gauges, and 4 gas filters giving evidence that it originally had 4 carburetors.

* Title: The California title (pink slip) shows the last registration as 1973.  Dennis will forward the owner’s name from 1973 when he returns from Tampa to his home in California.

* Unusual Styling Cues:  I find many of the styling cues interesting – even though the overall look and feel of the car is a bit awkard.  Keep in mind that I like the larger fiberglass cars.  I’m more of an “American Boulevard Cruiser” kind of guy with cars that have wheelbase dimensions of 110” or longer (127” with my 1953 Maverick Sportster).

But…this car features a hood scoop and two side air scoops.  Interestingly, the side air scoops seem to be designed to feed air to the rear brakes.  An unusual but impressive approach for cooling (if that was indeed their true design).  The hood opens from each side and is in two pieces which is much more reminiscent of a 1930’s car than the styling of fiberglass cars you would see in the 1950’s.   Also, the rear of the car is large and has an opening trunk – it’s large enough to have another full size engine back there!

* Interior Seating: The car easily seats 4 – which is unusual in and of itself.  The backseat has a narrowed bench seat. 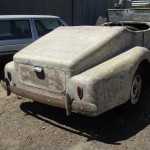 The Back End Of The Car Is Unusually Square But Has A Great Amount Of Storage Space.

So…. We have another “Mysterion” on our hands gang, and I’m sure there will be many more “Mysterions” to come our way.  This fiberglass car certainly looks like an ambitious job completed by a competent engineer – although the styling leaves me a bit wanting.  Based on the method of construction, it could be a very early car – it certainly points to something in the early 1950’s which is unique in and of itself.

So….calling all “Fiberglass Friends”…..checkout your files and see if you can find out what it is.  All of us would greatly appreciate knowing what you “know” – especially Dennis Blietz. 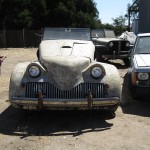 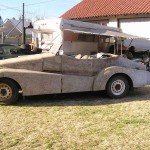 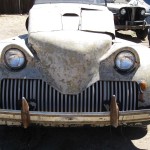 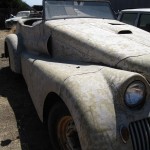 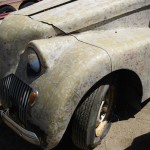 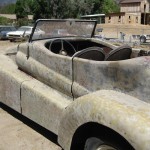 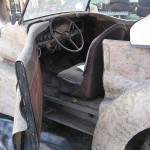 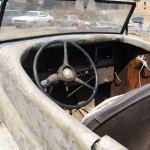 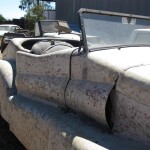 Here’s A Partial View Of The 1936 Hudson Mechanicals – There’s Certainly Alot Of Gadgetry Going On At The Firewall!

A Four-Passenger Setup For A Fiberglass Car Is Extremely Unusual – No Matter When It Was Built. 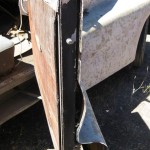 The Back End Of The Car Is Unusually Square But Has A Great Amount Of Storage Space. 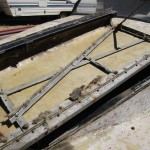 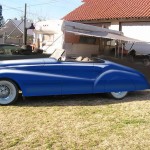 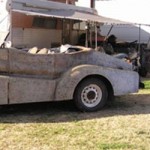