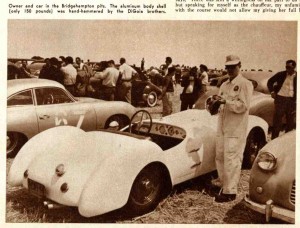 Caption: Owner and car in the Bridgehampton pits. The aluminum body shell (only 150 pounds) was hand-hammered by the DiGoia brothers.

Research is a wonderful thing.

Thru hard-work, determination, teamwork, collaboration, discussion, discovery, and sometimes sheer luck – the truth is often revealed.  In our case concerning the Tobin Special, the truth is that it’s…..aluminum – not fiberglass.  Good friend Tim Ritter was the first to point this possibility out to us, and we continued to hunt down the true story.

The process of discovery is often a success in every way.  Not only have we found the missing article that Erich Schultz referenced in our previous story about the Tobin….we found the relatives of the men who built and bodied the chassis.  There’s lots to share with you about this car, and we’ll do so because the car is a very special “special.”

Pretty impressive stuff gang.  And we couldn’t do it without you and the “above and beyond” efforts each of you often take in order to get the last bits of information into our “Forgotten Fiberglass” headquarters to make the stories flawlessly accurate.  To each of you…I salute you 🙂

Today’s story is from Road & Track Magazine and printed in March, 1953.  This is the missing article that good fiberglass friend Erich Schulz alluded to in our earlier article.  Let’s see what R&T had to say about this smart looking car:

When E. J. Tobin decided to modernize his 13 year old BMW type 328, he was firm that no weight penalty should be involved.  Careful planning actually resulted in a small saving, the final figure being 1460 pounds.  The chassis frame, and transverse front spring were lowered two inches, and the radiator was relocated ahead of the independent front suspension.  This, plus Oriflow shock absorbers, completed the chassis modifications.

The original BMW 2-litre engine was conservatively rated at 80 bhp at 4500 rpm, but is generally conceded to have been capable of 100 bhp at 5000 rpm.  Tobin has kept to stock specifications, including a 7.5 to 1 compression ratio, but a special camshaft carries the power curve on up to a peak of 5500 rpm. 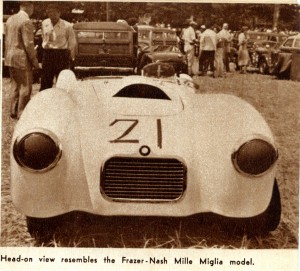 Writing on his Bridgehampton performance, Mr. Tobin says, “There was still a willingness on her part to do better, but speaking for myself as the chauffeur, my unfamiliarity with the course would not allow my giving her full head.”

So there we have it – the “lost” article.

There may be other articles out there printed back in the early ‘50s, and I’ll be on the lookout for them.  Send them my way, if you find any gang.  But…two new developments have occurred recently, and one involves finding the relatives of the “DiGoia brothers” who built the body.

And the other development is just as special – and will be shared with you in the near future.  Lots more to share here soon gang about the Tobin BMW 328 Special. 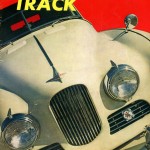 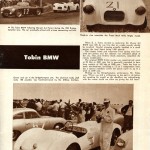 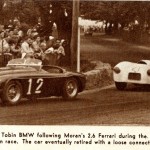 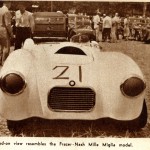 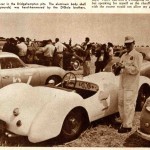 Caption: Owner and car in the Bridgehampton pits. The aluminum body shell (only 150 pounds) was hand-hammered by the DiGoia brothers. 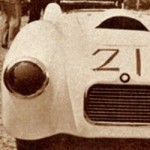