I love searching for lost cars and their histories but the best part of what we do is bringing it all together.  Matching the car, the history and the families related to building it and putting it all together.  Then, sharing the story with all of you.  That’s exactly what we are doing with the star of today’s story – the 1954 Frazer Custom – and it’s taken over 10 years to do it.  And away we go 🙂

Daniel Strohl of Hemmings and I started looking for the background of this car in 2007.  That’s the date of the photo shared in Hemmings posted below.  We shared the photo and looked for historical information on the car but there was nothing.  A brief photo shared with us and nothing else.  We thought the photo was from around the same time we received it in 2007.  It turned out that the photo was from a bit earlier – from around the year 2000 – and the search continued. 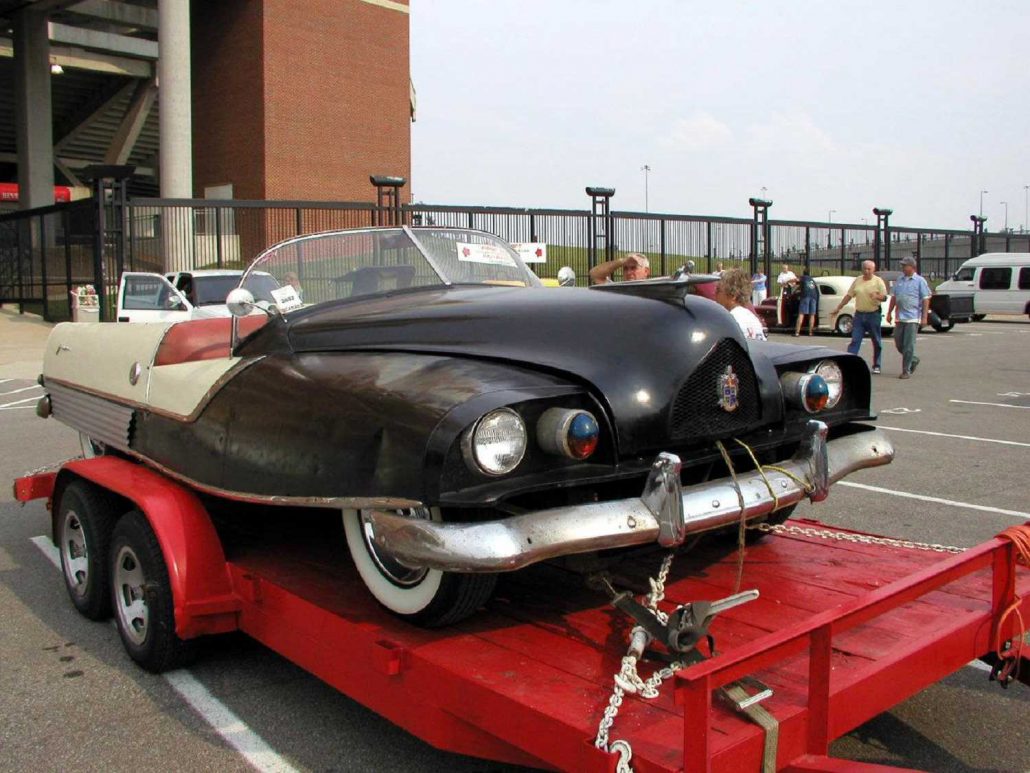 Nine years later in 2016, Dan Strohl sent me another photo of the car he found shown below.  Certainly the car was on the same trailer and perhaps at the same show.  The person who provided the photo thought it was from the 1990s.  Dan posted this photo for readers to review in Hemmings Classic Car magazine in December, 2016 but still no one responded with information identifying the car.  For such an interesting looking car, it certainly had to have a history and an owner – but who was it?

Click Here To View The Hemmings Article From December, 2016 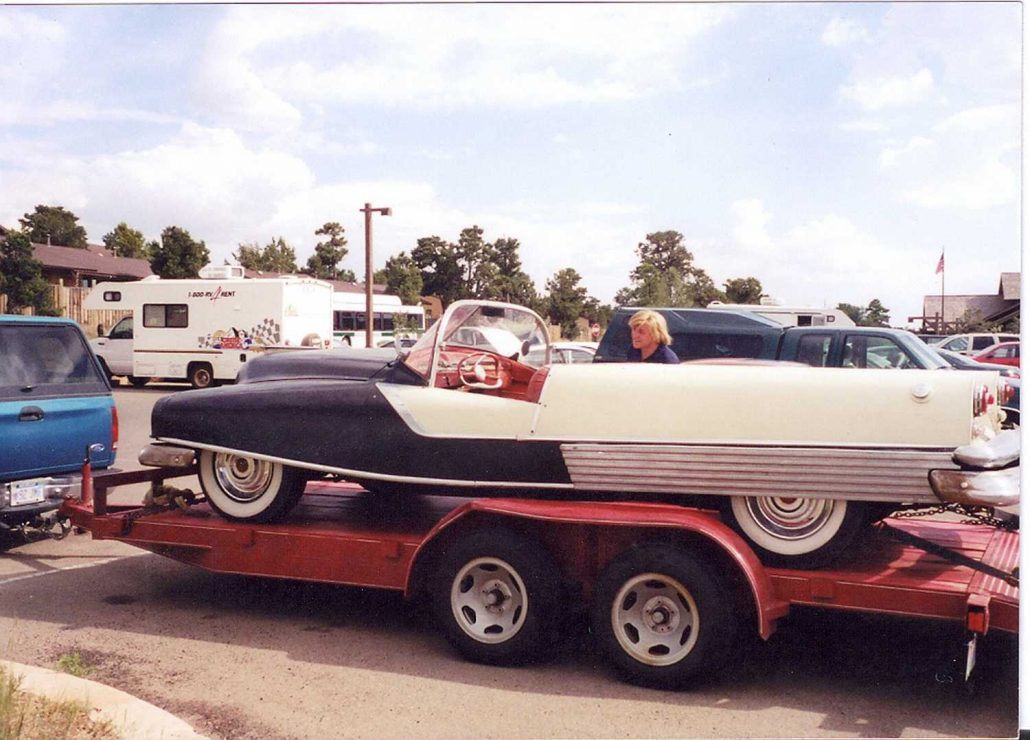 I’d Rather Be Lucky Than Good

In January, 2017 I bought a restored Kaiser Dragon and joined the Kaiser Frazer Club, and by early 2018 I had met fellow Kaiser Frazer club member Mike Barker.  Mike knew about my interest in unusual vintage cars and wanted to share the story of a car he owned – a car he called the “Batmobile.”  He didn’t have any photos, but when he started telling me about his car I could quickly tell it was the car we had been looking for – 10 years standing.

Within a year, Mike and I had made a deal and the Frazer Sport Custom became part of our collection.  Good friends Craig Johnson and Art Flores helped bring the car back to its new home at Undiscovered Classics in Tampa, Florida.  Photos below are from the pick up day on July 2nd, 2018. 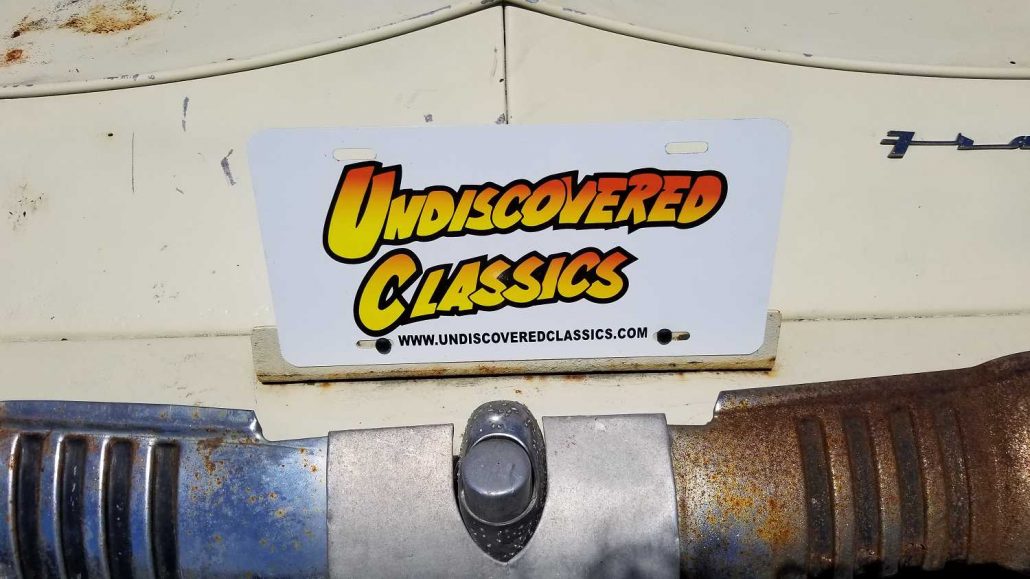 Immediately upon arrival in the summer of 2018, we placed the car on display at the Sarasota Classic Car Museum in Sarasota, Florida and began our research.  Hemming magazine helped us share this with the public with a short article in their November, 2018 issue of Hemmings Classic Car (also shown below).

From the Start, The Frazer Custom went from private collection to public display – a common occurrence for this car since its acquisition 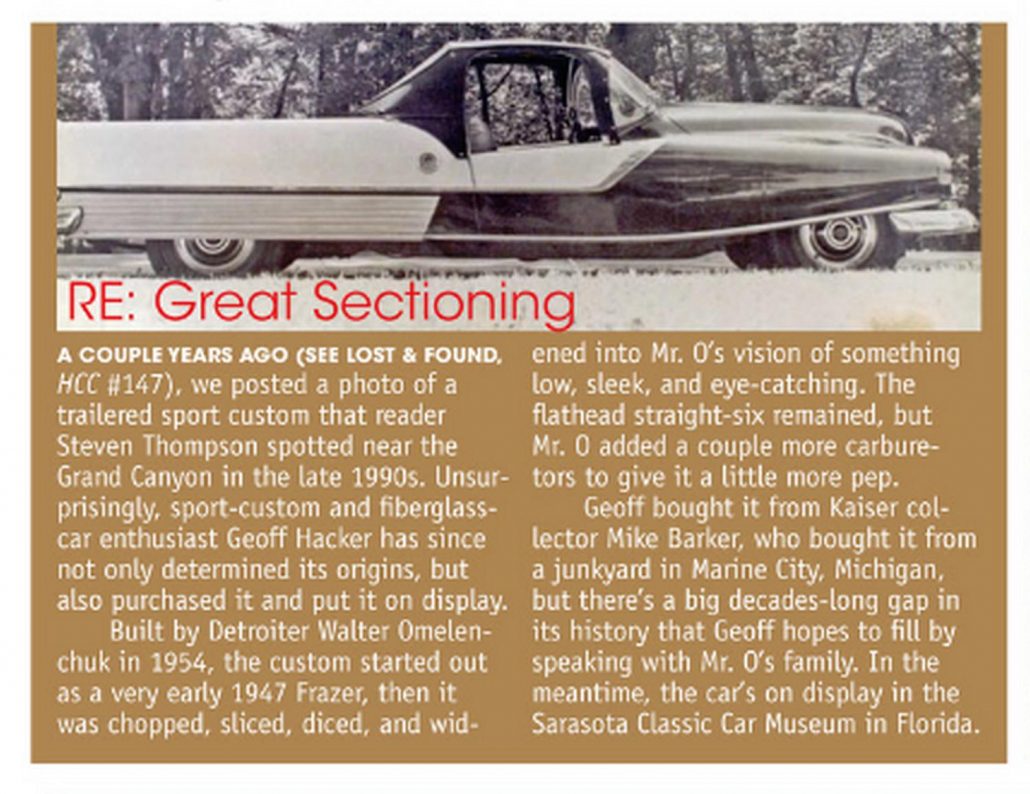 But what exactly was the car and who built it?  Thankfully, under the stewardship of Mike Barker, he had located an article which shared the history of this car. 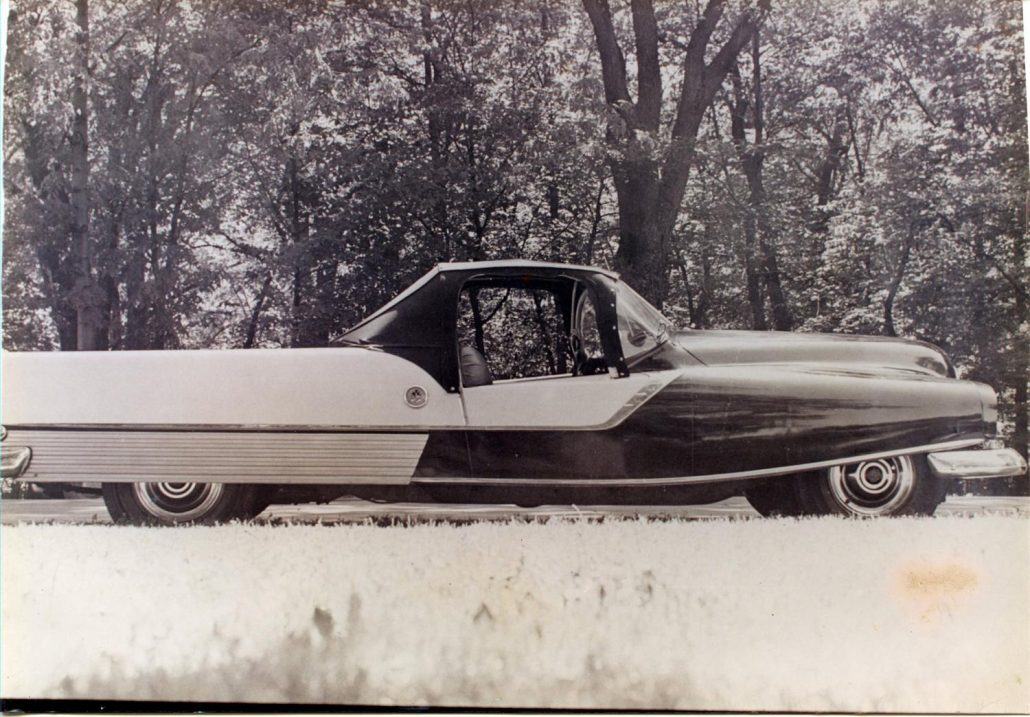 One of the documents that Mike shared with me was a 1994 article tracing the history of the car.  It was published by the Kustom Kemps of America and it shared the history and an original photo – one that we were able to later obtain.  What’s great about the article is that it shows the “as-found” condition of the car – one that confirms that the car was kept out of the weather nearly all of its life.  You can read the article and check out the photos by clicking on the link below.

During Mike Barker’s stewardship of the car, he shared the Frazer Custom and its history with the Kaiser Frazer club.  It first appeared in a 1999 Kaiser-Frazer Calendar with a story as shown below. 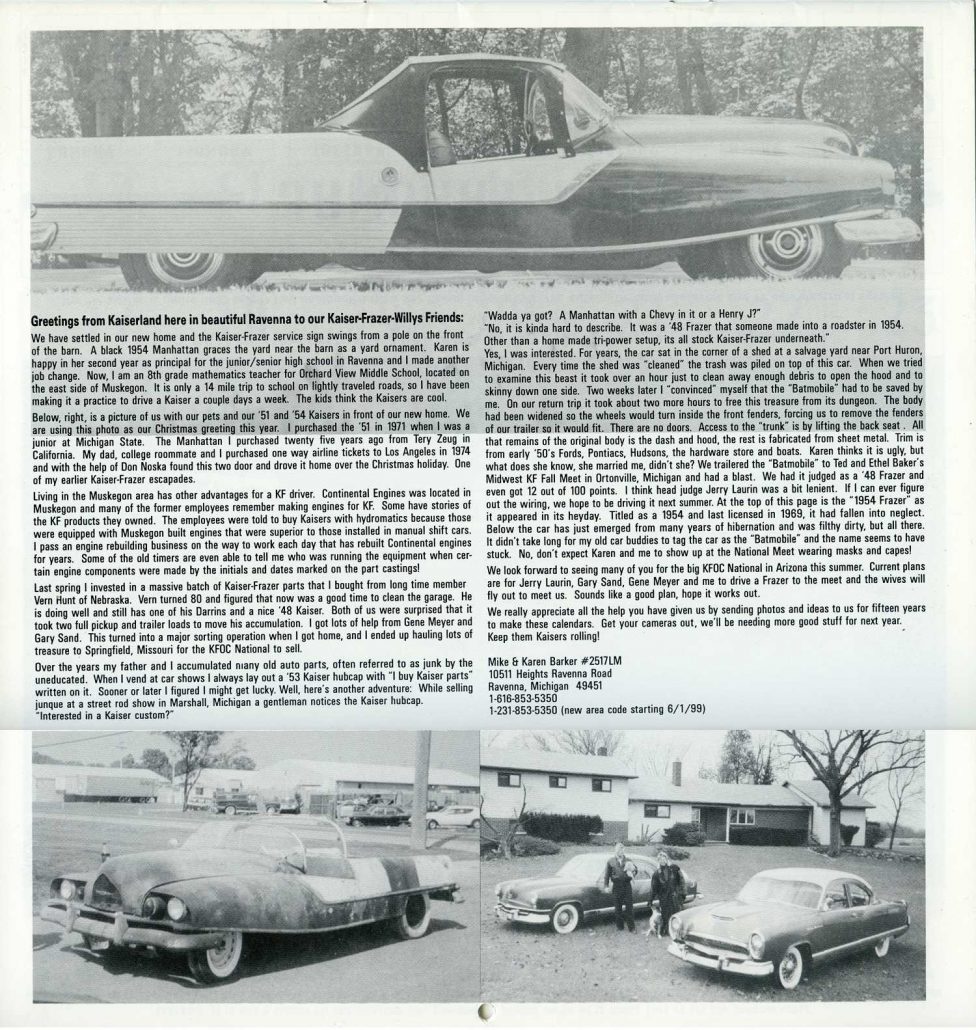 Here’s the story about the car that Mike wrote in the calendar above in 1999:

Over the years my father and I accumulated many old auto parts and when I “vend” at car shows, I always lay out a ’53 Kaiser hubcap with “I buy Kaiser parts” written on it.  Sooner or later I figured I might get lucky.  Well, here’s another adventure.  While selling at a street rod show in Marshall, Michigan, a gentleman notices the Kaiser hubcap.

“Wadda ya got?  A Kaiser Manhattan with a Chevy in it?  A Henry J?”  I responded.

“No,” he shared.  “It’s kinda hard to describe.  It’s a ’47 Frazer that someone made into a roadster in 1954.  Other than a home made tri-power setup, it’s all stock Kaiser-Frazer underneath.”

Yes, I was interested.  For years, the car sat in the corner of a shed at a salvage yard near Port Huron, Michigan. Every time the shed was “cleaned” the trash was piled on top of this car.  When we tried to examine this beast, it took over an hour just to clean away enough debris to open the hood and to skinny down one side.  Two weeks later I “convinced” myself that the “Batmobile” had to be saved by me.  On our return trip it took about two more hours to free this treasure from its dungeon.

The body had been widened so the wheels would turn inside the front fenders, forcing us to remove the fenders of our trailer so it would fit.  There are no doors.  Access to the “trunk” is by lifting the back seat.  All that remains of the original body is the dash and hood, the rest is fabricated from  metal. Trim is from early ’50s Fords, Pontiacs, Hudsons, the hardware store and boats.  Karen, my wife, thinks it’s ugly, but what does she know?  She married me, didn’t she?

We trailered the “Batmobile” to Ted and Ethel Baker’s Midwest Kaiser-Frazer Fall Meet in Ortonville, Michigan and had a blast.  We had it judged as a 47 Frazer and even got 12 out of 100 points.  I think head judge Jerry Laurin was a bit lenient.  If I can ever figure out the wiring, we hope to be driving it next summer.

At the top of this page is the 1954 Frazer as it appeared in its heyday.  Titled as a 1954 and last licensed in 1969, it had fallen into neglect.  Below the car has just emerged from many years of hibernation and was filthy dirty, but all there.  It didn’t take long for my old car buddies to tag the car as the “Batmobile” and the name seems to have stuck.  No, don’t expect my wife Karen and me to show up at the KF National Meet wearing masks and capes!

It next appeared in a 2011 Kaiser-Frazer calendar with story as shown below. 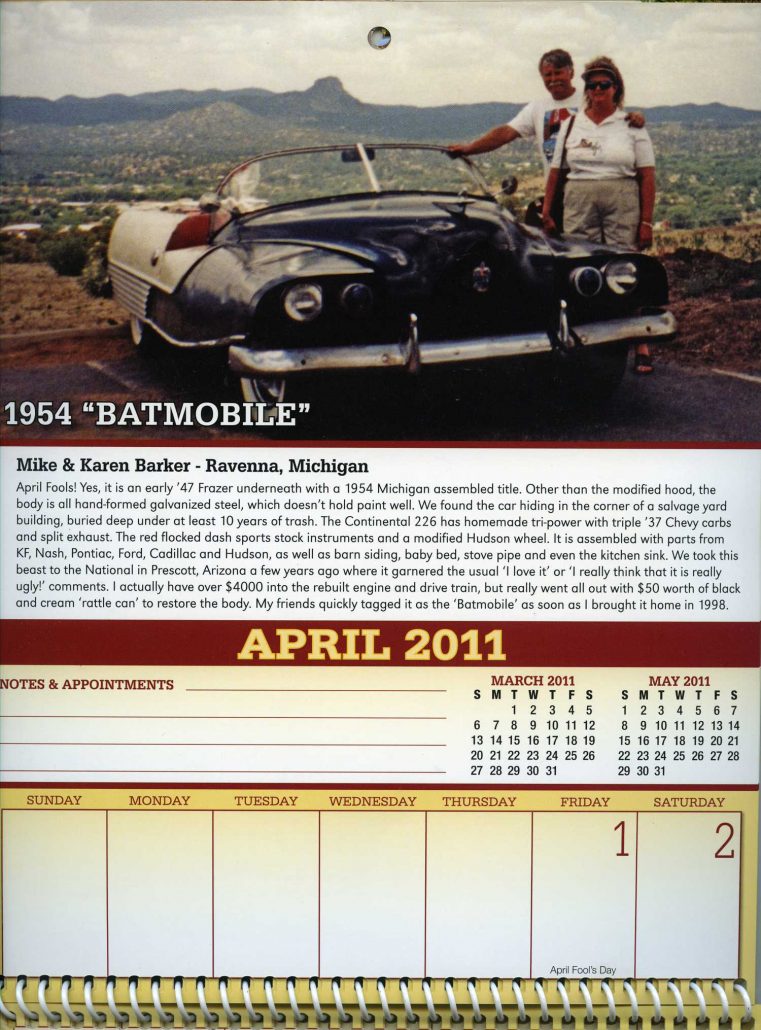 Here’s the story about the car that Mike wrote in the calendar above in 2011:

Yes, it is an early ’47 Frazer underneath with a 1954 Michigan assembled title.  Other than the modified hood, the body is all hand-formed steel. We found the car hiding in the corner of a salvage yard building, buried deep under at least 10 years of trash.  The Continental 226 engine has homemade tri-power with triple ’37 Chevy carbs and split exhaust.

The red flocked dash sports stock instruments and a modified Hudson steering wheel.  It is assembled with parts from Kaiser, Frazer, Nash, Pontiac, Ford Cadillac and Hudson as well as barn siding.  We took this beast to the National in Prescott, Arizona a few years ago where it garnered the usual “I love it” or “I really think that is really ugly!” comments.  I actually have over $4000 into the rebuilt engine and drive train.  My friends quickly tagged it as the “Batmobile” as soon as I brought it home in 1998.

During Mike Barker’s ownership, the Frazer Custom was also seen at a Kaiser-Frazer National Meet in an excellent documentary on the Kaiser Frazer Marque.  The entire 25 minute video on Kaiser-Frazer history is worth watching but I’ve cued up the video below at the 2:15 where you can see the Frazer custom at rest and being driven by Mike.

We recently heard from Keith Kodet about the Frazer Custom and he shared the following:

“Geoff…in the 1990s the car was stored in the back of an old barn in the now defunct “Total Recall” junkyard in Marine City, Michigan.  The owner, Tom, called it the “Batmobile” and I inquired about buying it a few times.  I remember it being red and white but I could be wrong.  Tom only gave me a price once.  As a young man in college, any price may have well as been a million dollars.  Glad to see it survived!  I always wondered about its fate.”

While we’re honored to be the current stewards of the 1954 Frazer Custom, we want to recognize the excellent effort extended by Mike Barker in saving this car, getting it back to running condition and sharing it with the public at large.  We look forward to sharing more stories in the near future about this special car as well as some exciting news and an upcoming appearance in 2021.  Those of you wanting to learn more about our 1954 Frazer Custom, click on the link below:

Click Here To Learn More About The 1954 Frazer Custom