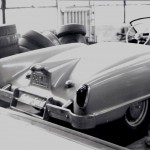 I love mysteries.  You know that.  And when someone sends in a mystery that looks like an interesting riddle to solve…..who could resist?

Enter Frank Cornell.  Frank has owned specials for 30+ years.  He has taken the time to school me in the history of Woodill Wildfires and other cars, and I have helped others learn what Frank has taught me.  So when Frank speaks…..I listen.

Recently, Frank sent in a mystery car to share with our group.  It’s a mystery in terms of who built it, when it was built, and if it is metal, fiberglass, or a combination of materials.  I’ll leave it to you to determine what you think it might be.

Let’s turn the story over to Frank….

From the Desk of Frank Cornell…

“Geoff….here’s another mystery for you.

It was around the late 1970s, and I unexpectedly came across this vehicle. I stopped off I-84 in Port Jervis, New York for fuel, and pulled into a Citgo station. While stretching my legs, I wandered into the garage and found “The Sabyan Special”. 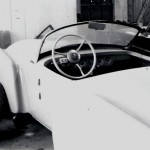 The mechanic on duty didn’t mind chatting about the car, or letting me photograph it. I believe the garage was called Prey’s.  As you can tell, the body is Studebaker based, but highly customized in true sport custom style. Now a two-seater roadster with chrome wire wheels, and some fancy body mods, it was a striking sight.

The chassis had not been shortened, it was a large car, painted a bright sky blue. I have no idea when it was constructed, or by whom. I do know that the name “Sabyan Special” came from it being featured in a major motion picture and driven by the leading lady. I do not know the movie title or actress, but I’m sure someone can solve that mystery.

The mechanic stated the car was owned by the lady owner of the garage, and was basically being used twice a year in local parades. Unfortunately, it was blocked in by other cars, so it wasn’t possible to get a ride in it. I believe the bodywork was all steel and the metalwork high quality.”

So….anyone hear of this mystery car gang?  Checkout the full set of pictures Frank sent us below – in the photo gallery.

The 1970’s isn’t that long ago, so I bet it survived.  Maybe it’s in the same garage where Frank Cornell originally spied it.  Anyone want to take a scouting trip out to Port Jervis, New York and have a look?  If you do, be sure to let us know what you find.

Inquiring minds want to know.  And the next story about this car on “Forgotten Fiberglass” will be from the desk of…..”you.” 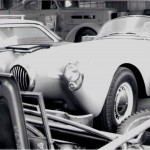 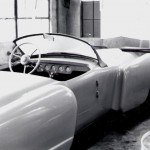 I Love The Pontoon Fenders Front and Rear. This Looks Like It Would Be A Ball To Drive! 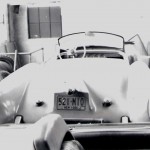 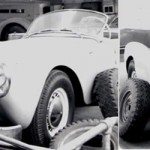