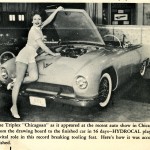 Caption: The Triplex “Chicagoan” as it appeared at the recent auto show in Chicago. From the drawing board to the finished car in 56 days – Hydrocal played a vital role in this record breaking tooling feat. Here’s how it was accomplished.”

Remember the song that Sinatra made famous back in the early 1960’s?  It went something like this:

Want to hear it?  It’s a great song, and no one does it better than Sinatra.  Click the triangle below to hear the song…it’s just 2 minutes long…

Did you know I’m from Chicago?  Or nearly so.

My mother constantly corrects me.  She says that I am not from Chicago.  Rather, I’m from the suburbs of Chicago.

What she is saying is that I’m from Buffalo Grove, Illinois.  Just north of Chicago.  According to my mom, “she” is from Chicago having been born and raised there.  Well anyway, I lived there (somewhere north of Chicago) ‘till I was about 17 years old and then we moved to Florida to find the fiberglass Shark/Tiburon that I constantly refer to.

Of course my mom says we moved to Florida for other reasons – and the Shark had nothing to do with our move.  Maybe she’s right again…. 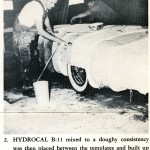 Caption: “Hydrocal B-11 mixed to a doughy consistency was then placed between the templates and built up from 1/4″ to 1/2″ from the top surface of the template.”

So…back in 2006 when Rick D’Louhy and I started researching lost fiberglass cars, I remember reading about one called the “Chicagoan.”  I thought to myself,

“What fun it would be to track down the history and learn more about the car that carried the name of the city where our family was from.”

It turns out, I couldn’t have been more right.  Very little was known about the Chicagoan, but it appeared in a few books and was variously known by names such as:

Which name was correct?  Why all the name changes?  Where are all the cars?  Who built the cars?  All of these questions appeared to me.  Inquiring minds wanted to know the answers.  I don’t take ambiguity that well.  There must be an interesting story out there somewhere.  Right gang? (I thought to myself – and maybe Rick).

So….another fiberglass mystery appeared to Rick and me, and it would turn out to be one of the most challenging research projects we had ever tackled.  I’ll be sharing stories of the Chicagoan and our research travels and travails throughout the next several weeks.  But for now, let’s start with one of many articles that appeared about the car – this article is one published in a trade publication from US Gypsum who was involved with the project from the beginning.

Ladies and Gentlemen….allow me to introduce you to… 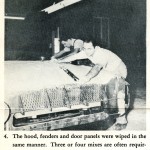 Caption: “The hood, fenders and door panels were wiped in the same manner. Three or four mixes are often required to complete a section.”

United States Gypsum and The Chicagoan:

In 1954, US Gypsum dedicated one of their first trade publications to a car they helped sponsor and build – the sensational 1954 Chicagoan Sports Car.  The car was built in record time to appear at the 1954 Chicago Auto Show with some of the most famous concept cars of their time.   A 1954 newspaper clipping about the show said the following:

I’ve never heard of so many show cars at one place before.  I’m not sure if this many appeared at the same time at any other auto show in America – then or now.  This was a heady time for car designers and their adoring public.  How exciting it must have been to attend the show.

The Chicago Auto Show was very close to Detroit, and no doubt benefitted from attracting so many star attractions from the day.  The fact that the city of Chicago had its own sports car to fawn over no doubt helped draw massive attention at the time.  There could be no better event to debut the Chicagoan at – and no more an exciting time too.  Everything was coming up roses.

Let’s learn a bit more about the Chicagoan from US Gypsum’s Newsletter specifically.  It’s 4 pages long and provides great insight into the design, build, and debut of the car.  It’s more technical than most of us are used to, but then again this is a trade publication and not an enthusiast magazine.  I’ll have some more “fun stuff” to share on this car in the near future. 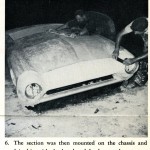 Caption: “The section was then mounted on the chassis and faired-in with the hood and fender panels.”

“Hydrocal Plaster is faster for tooling original models and molds for reinforced plastics” Frank Hinger, President of Triplex Industries announced several weeks ago in Chicago.  Mr. Hinger related how his company completed the “Chicagoan”, newest plastics sports car, from the blueprint to the Chicago Automotive Show in 56 days.

This tooling feat was made possible by the use of Hydrocal gypsum cement and the loft template tooling method.  The job was done in one-fifth the time estimated for an original full size mahogany model, as estimates ranged from 16 to 24 weeks for a model hand carved from wood.  Mr. Hinger continued “we never would have completed the car in time for the automobile show if traditional tooling methods had been used.”

Actually, the Hydrocal working model was completed in 4 weeks, as contrasted to 16 to 24 weeks for a mahogany model to serve the same purpose.  U.S.G. (US Gypsum) tool engineering methods and Hydrocal have played a big part in bringing about the plastics sports car era.  Because of limited production, traditional automotive tooling methods are too expensive.  Quick, low cost tooling is essential in the development of a new model.

The Triplex “Chicagoan”, the newest entry in the plastic car body field, is a fine example of “rapid tooling” techniques.  Bob Owens, Designer and Chief of Triplex Plastics Division, commented, “We have barely scratched the surface exploring the possibilities of Hrdrocal plaster for tooling.”  He continued, “it seems certain that the ease and economy with which the gypsum cements can be applied will profoundly influence future body design.” 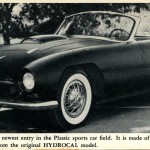 Caption: “Here is the “Chicagoan” – the newest entry in the plastic sports car field. It is made of reinforced plastic which was laminated in a mold made from the original Hydrocal model.”

The Hydrocal plaster surface was sealed with a primer surface sealer followed by several coats of lacquer.  The surface was polished to produce a surface that compared with the finished car.  If only a few plastic bodies are required, Hydrocal molds can be made from this model by the splash cast technique.  However, if production molds are required they can be made of glass cloth and resin from the full scale Hydrocal model.

In the same US Gypsum Newsletter, they printed an editorial about plastic sports cars that may be of interest to each of you.  Here’s what they had to say:

“The zooming popularity of the plastic sports car in this country, has opened a new market for pattern makers and other industrial tooling people. One of the problems in producing these cars is the relatively small output of any particular model.  This makes it difficult to justify expensive dies and tools.  For this reason, most of the work is being done with Hydrocal.

This kind of work has broadened the opportunity for job pattern shops.  In the last issue of the Hydrocal Craftsman, the plastic sports car was mentioned.  The response was so great that in this issue, the subject is covered in more detail.

With individual body builders actively producing fibrous glass bodies in ever-increasing volume, some pattern shops have been deluged with work orders for original full scale models, patterns, and molds.  This means that the reinforced plastics auto body has moved off of the drawing board, and out of the dream stage, and into actual production.”

The Chicago Auto Show started way back in 1901.  By 1954, it was widely acclaimed and received attention from across the world.  The “Chicago Auto Show” continues today and maintains a website about its past, present, and future.  Click on the following link if you would like to learn more about the history of the 1954 Chicago Auto Show where Frank Hinger’s “Chicagoan” debuted.  You can explore this same website for all historical information on this wonderful show:

The story of the “Chicagoan” gives us a glimpse into the past when sports cars were just being defined in America, and the dreams of many young men were to design, build, and drive their own sports car.  The joint dream of entrepreneur Frank Hinger of Triplex Industries, and his Chief Designer Robert Owens represents the fruition of one of these dreams – one that came true far far away from California and on the doorstep of Detroit to boot.

Thanks to Rick Ruth for his loan of his collection of Chicagoan materials – a story which by itself is worth telling on our website soon. 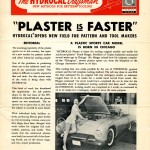 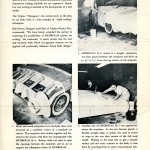 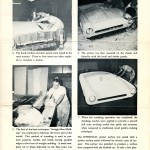 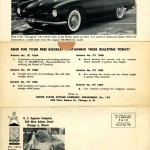 Caption: The Triplex “Chicagoan” as it appeared at the recent auto show in Chicago. From the drawing board to the finished car in 56 days – Hydrocal played a vital role in this record breaking tooling feat. Here’s how it was accomplished.” 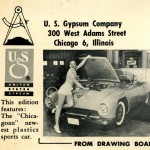 Caption: “Here is the “Chicagoan” – the newest entry in the plastic sports car field. It is made of reinforced plastic which was laminated in a mold made from the original Hydrocal model.” 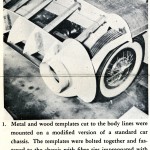 Caption: “Metal and wood templates cut to the body lines were mounted on a modified version of a standard car chassis. The templates were bolted together and fastened to the chassis with fiber ties impregnated with Hydrocal B-11. Burlap cloth was used to span the openings between the templates and to act as support for subsequent mixes of Hydrocal.”

Caption: “Hydrocal B-11 mixed to a doughy consistency was then placed between the templates and built up from 1/4″ to 1/2″ from the top surface of the template.” 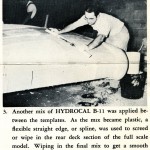 Caption: “Another mix of Hydrocal B-11 was applied between the templates. As the mix became plastic, a flexible straight edge, or spline, was used to screed or wipe in the rear deck section of the full scale model. Wiping in the final mix to get a smooth surface and the exact contour of the body is best done by spanning three or more cross-sectional templates. If sections are wiped in one at a time using only two template stations, flat spots will result instead of a true contour.”

Caption: “The hood, fendersn and door panels were wiped in the same manner. Three or four mixes are often required to complete a section.” 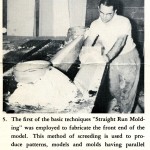 Caption: “The first of the basic techniques “Straight Run Molding” was employed to fabricate the front end of the model. This method of screeding is used to produce patterns, models, and molds having parallel edges in the form of straight molding. A metal template cut to shape indicated on the blue print was used to screed most of the front end while it was on surface table.”

Caption: “The section was then mounted on the chassis and faired-in with the hood and fender panels.” 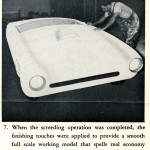 Caption: “When the screening operation was completed, the finishing touches were applied to provide a smooth full scale working model that spells real economy when compared to traditional wood pattern making techniques.” 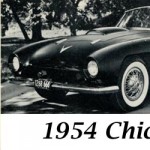