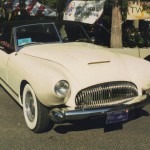 Bandleader Freddie Martin had this Muntz Jet customized by Joe Bailion. Many Would Consider This A “Sport Custom” Car.

In order to introduce you to the topic of the article that will be touched on today (and discussed in more detail in the second part of this story), I need to first introduce you to the author.  So let’s begin.  Today, I have the honor of introducing you to another friend of fiberglass – noted author, writer, and good friend – John Gunnell.

I’ve been reading John’s books and articles for years before I got a chance to get to meet him in the Fall of 2008.  We were both working with the folks at the Barrington Concours d’ Elegance outside of Chicago Illinois, and I was helping judge a class – postwar American Sports Cars.  John was also judging.  Before the Concours started, I had a chance to sit down and get to know John a bit better.  Our conversation that day kicked off a good friendship and our talks from that point forward on cars have been superb.

John has been writing books for years.  I stopped counting his books when I reached “10.”  Two of my favorite books of Gunnell’s are the “Standard Catalog of American Cars: 1946-1975” (first published in 1987) and “Weird Cars” (first published in 1993).  The Standard Catalog of American Cars is critical to the research we are doing.

Authors like Gunnell have spent countless hours detailing both well-known and obscure marques like our “Forgotten Fiberglass” cars, in the hopes of recognizing the effort of each person and company who brought forth a unique car (or cars) to the American public.  John’s book “Standard Catalog of American Cars”  has been useful to so many of us when viewing the known histories of cars, and it was reassuring to know that he covered them in detail along with other well-known marques.  In fact, the “Standard Catalog” was a combination of Perry Zavitz’ continued work as well as John’s latest research and documentation.  The two of them really created a fantastic resource for car guys wanting to know more about this era of cars.

Click on the following links to see the array of books John has written that are currently for sale on Amazon.com:  Click here to review John Gunnell’s books. 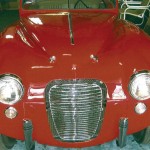 This Renville roadster was one of the earliest postwar sport custom cars.

John is a consummate car guy – as you would expect.  Recently, he wrote an article directly related to the heritage of our “Forgotten Fiberglass” cars that focused on “Sport Custom” cars.  But before we review this topic and article,  allow me to share a bit more about John’s background with you.

As you know from stories here at “Forgotten Fiberglass,” I’ve been focusing on books that review postwar American car history in great detail.  I’ve already introduced you to Perry Zavitz.  We’ll soon be talking about George Dammann, and today we’ll discuss a bit about John Gunnell.

John Gunnell (a.k.a. “Gunner”) has been writing about cars and trucks — mainly vintage models — since 1972.  As a kid growing up in Staten Island, N.Y., Gunner played with a tin Marx “Service Garage” that he loaded with toy vehicles.

He recently opened Gunner’s Great Garage, a shop in Manawa, Wisconsin, designed to help car restorers start their own businesses. To no one’s surprise, he decorated it with tin gas stations.

When John graduated from Brooklyn Technical High School in 1965, his dream was to become an Industrial Designer, but he never got into design school.  Instead, he attended Staten Island Community College and Richmond College, which were both part of the City University of New York system.

In the mid-1970s, after 10 years of slugging through college both days and nights, Gunner got a degree in art and discovered that his union job in a supermarket paid more than artists got. So, he kept stocking shelves, but started writing articles about old cars as a sideline. He became the volunteer editor of two car club magazines and joined a group called the Society of Automotive Historians. 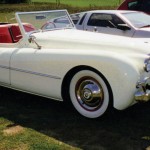 Lee Bestul first built his sport custom in the early 1950s. He later restored it.

In 1978, publisher Chet Krause heard about him and offered a job.  From 1978-2008, John was an editor with Old Cars Weekly published by Krause Publications in Iola. Wisconsin. Though he had no formal journalism training, he quickly learned the trade at this weekly paper focusing on the cars he loved.  Over three decades he met big collectors, wrote thousands of articles and did more than 85 books.

In 2008, John decided to go off on his own as a free-lance writer and in 2010 he added a building called Gunner’s Great Garage, in Manawa, Wisconsin to his list of car hobby endeavors. Gunner’s Great Garage offers a restoration shop called Shane’s Classic Sports Cars, automotive gifts and books and appraisal services. John owns a fleet of 10 cars from 1936 to 2009 models and 15 motorcycles covering the years 1940 to 2001.

Be sure to checkout John’s website:  Gunner’s Garage (click here to view Gunner’s Garage).  It’s packed full of great car stories and references to many car-related topics that I’m sure you’ll enjoy.

Sport Custom Cars And Their Relationship To Fiberglass Sports Cars

Why would Rick D’Louhy and I be interested in Sport Customs and John’s most recent article on this topic?  Let me tell you 🙂

Because…. in many ways, fiberglass sports cars are “Sport Custom” cars.  While the definition of “Sport Custom” is not written in stone, there are 3 points to consider when describing these types of cars:

* Dan Post Books on Custom Cars: In 1947, Dan Post started writing a series of books that showcased custom cars of the 1940s (and later 1950’s).  In this same year, he started to define “Sport Customs” which were either custom/coach built cars, or highly restyled production cars.  The end result was a series of books that showed custom cars, restyled cars, and “custom” sports car – hence the name “Sport Custom.”  This is the earliest reference to the term “Sport Custom” that Rick D’Louhy and I can find. 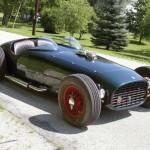 * References to Sports Cars in the 1950s: Many terms were used for these types of cars in the 1950’s in various publications.  Some of the terms include “Sport Custom,” “American Boulevard Cruiser,” “Sports Rod,” “American Special,” and other terms too.  These terms were often used to describe the fiberglass sports cars we enjoy today.

* Ray Scroggins Sport Custom Article in Special Interest Autos, Nov-Dec 1977: Good friend Ray Scroggins wrote an excellent article on Sport Customs that talked about the heritage of these cars from the 1940’s thru the 1970’s.  He covered cars that were as disparate as full-blown coachbuilt customs to custom sports cars.

Good friend Tony Miller has been helping refine the definition of Sport Custom cars with Rick and me too.  Here’s another “refinement” of the definition we’re currently working on.

When more than 1 or 2 of a car or body were built, the name “Sport Custom” has less applicability – even though it may aptly describe the style of car.  “Sport Custom” generally refers to a “one-off” type of car that’s typically aluminum, sometimes metal, and rarely fiberglass (note: when fiberglass was used to create a body, generally more than one or two bodies were made thus taking it out of the category “Sport Custom.”).  The term “Sport Custom” also refers to a car that was never raced – and not built to race.

We’ll be discussing and refining the term “Sport Custom” over several future stories on our “Forgotten Fiberglass” website, and welcome your comments in our “Fiberglass Forums.”  All thoughts and ideas are greatly appreciated gang!

This is the end of part 1 of our story and was meant to introduce you to the concept of “Sport Custom” cars and to our good friend John Gunnell as well.  The next part of this story will focus on John’s article on “Sport Custom” cars…. so….get ready to “rumble” gang…

This Renville roadster was one of the earliest postwar sport custom cars.

Lee Bestul first built his sport custom in the early 1950s. He later restored it. 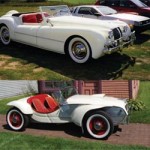