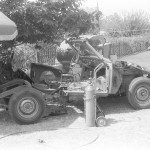 Here’s The Start Of Howard Green’s Car. The Studebaker Chassis Is Cut and Ready To Be Spliced. Mel Keys Noticed The Dash Here Is The Same As In His Finished Car.

How many people customized their C2 coupes?  Who was the first to do so?

Mel was born in 1929 in Lake Charles, Louisiana.  Early on, his family moved to Beaumont, Texas and he grew up thru age 19 in that town.  As the Korean conflict started to heat up, Mel and 3 of his buddies joined the Air Force in 1950.  He spent 4 years in the service and served honorably throughout.  In 1954, Mel was honorably discharged, briefly came home, and then headed to Los Angeles to study automotive design at the Art Center School of Design.  Strother MacMinn was one Mel’s instructors, and Mel stayed at the Art Center for 3 years.

He was in California from 1954 thru about 1958.  During this time, he became friends with fellow Art Center student Hugh Jorgensen (Victress S1 co-designer, and later an instructor for Art Center and noted designer), and was a peer of another student – Pete Brock – who later designed the iconic Shelby Daytona Cobra coupe.

Mel was around some pretty cool car guys! 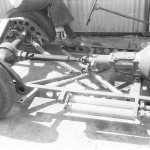 What Fine Workmanship Went Into Building This Car. Lightening Holes Were Used Throughout, and The Exhaust System Tastefully Exited On The Passenger Side Through The Rocker Panels.

He also spent quite a bit of time around Victress, and helped complete the Victress C3 molds (larger 100” wheelbase coupe designed by Merrill Powell) in early 1955.  He even worked as a Victress employee from time to time.  Mel was one busy person!

It was during this time, that Mel became friends with another individual who traveled from down South to “Victress-land.”  This person was Howard Green.

Recently, I spoke with Mel Keys about Howard Green and his car.  Mel offered up some pictures of Howard’s nicely done “Special.”

As his plans evolved, he decided to base his custom ideas on the newly released Victress C2 coupe.  Howard was a school teacher from Jackson, Mississippi, and, as Mel told me, Howard had firm ideas about how he wanted to design his custom sports car.  Mel remembers the following about Howard:

“Howard came to California to learn how to do fiberglass work and build his own car.  He worked at Lockheed at this time, and would spend his off hours / days at Victress learning how to work fiberglass, and participating in some of the jobs too.” 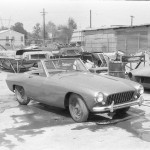 So Much Can Be Seen In Pictures At The Victress Factory. Here’s Howard’s Car With Ford Wide-Five Rims Installed. In The Background Is The Victress C3 Mold And A C3 Body Curing. Mel’s C3 Is Also Shown Here.

Howard did a wonderful job building his custom roadster.  I think you’ll agree as we review what’s known about the car based on the pictures that survive – taken by Mel Keys.

Through our fiberglass friend Mel Keys, we have nine pictures of Howard’s car during various phases of pre and post construction.  Let’s see what we can tell from the pictures.

Chassis:  According to Mel Keys, the donor car was a Studebaker, and you can confirm this with the picture below of a car chopped in half.  The windshield and dashboard instrumentation appear identical to Howard’s finished car.  Mel also believes that the engine / transmission was Studebaker.  Some of you may be able to confirm this by looking at the finished chassis and drivetrain pictures shown below.   What’s notable about this picture is Howard’s treatment of the exhaust system.  Both pipes exit behind the seats on the passenger side of the car.  This is evident in the next picture showing the car in nearly finished form at the Victress Factory.

Suspension:  Also evident at the “Factory” are the wide five Ford wheels used on 1936-1939 Ford automobiles.  This was an interesting choice because these were regarded as a “hardier” wheel to use and better for racing due to strength.  Circle track guys then and now prefer the same wheels for this reason.  This means that front and rear axle were most likely late 1930’s Ford (or converted 1940’s Ford with swapped out spindles, hubs, and drums). 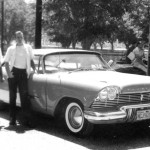 Here’s The Only Picture Of Howard Green That Mel Has Found So Far. Mel Is Standing Close To The ’57 Plymouth, And Howard Is To Mel’s Right.

Custom Features of C2 Body:  The rear treatment of the Victress C2 was entirely Howard’s design, and I thought his use of a silhouette of a spare tire over the trunk area of the car was tastefully done.  Howard also added the small tailfins to the rear as well as a center recessed area for the license plate.

And….good friend Tony Miller helped with the question I had about hubcaps.  I’ve seen this style on many 1950’s and early 1960’s fiberglass sports cars and have wondered what they were.  Tony told me that they were not production “caps.”  Instead, they were popular after-market items, and no longer available – or reproduced.  These are very stylish hubcaps gang, and were used on other cars like the LeMans Coupe as well.

The pictures appear to have been taken at the “May Company” location in North Hollywood California.  This location was brand new as of 1955, and would have made a modern and stylish setting for the pictures of Howard’s Special.  Here’s a link to the history of the May Company and their locations:

History of the May Company Department Store 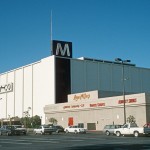 Here’s A More Recent Shot Of The May Company Building Where The Final Pictures Were Taken In 1955 or 1956.

When I contacted Bill about Howard, the first thing he told me was that Howard had come to California to design and build his own sports car.  The same story that Mel shared with me.  Howard had a dream, and he wanted to make it happen.  He would work for Victress during the day and then switch to working on his car at night.  Victress had provided space for Howard to build his own car.

I asked Bill how Howard’s car looked when finished, and he thought it was a real nice job.  Then, Bill said to me,

“Geoff….do you know what the emblem on the front of Howard’s car stood for?”

Ok…..I didn’t even see an emblem on any of the pictures.  So…I magnified the photos and sure enough I could see the emblem which was three letters – “ECM.”.  “Ok….Bill….what did ECM stand for?”  I asked.  Bill replied,

Bill also remembers a peculiar habit of Howard’s in terms of “lunch.”  According to Bill:

“Howard’s the only guy I ever met that made his lunch by taking everything you would need to make a sandwich, and throwing all of this into a paper bag.  He didn’t make a sandwich – just threw everything loose into the bag – and ate it the same way when lunch time came around.” 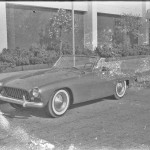 This Picture Is Not In The Best Condition, But Shows A Front Three-Quarter Picture Of Howard’s Car.

I hope we find Howard soon.  Finding his car after so many years would be really cool.  If the car exists, I bet the current owner would love to know a bit more of the history that we reviewed today.

I also spoke to Merrill Powell about his memories of Howard Green.  Here’s what he had to say.

Howard had come from Mississippi foremost – to learn the fiberglass business.  Building his car evolved from that, and he worked for Victress on and off for about 2 years.   Merrill also believes that Howard returned to Mississippi for a short time and then came back to Victress and began working with them again.

“I thought it was kind of cute – fins and all.  He did a very fine job on his sports car.” 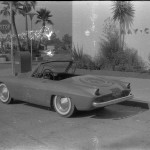 Here’s A Rear Three-Quarter Shop Of Howard’s Car At The May Company Building in North Hollywood, California.

I asked Merrill how common it was to have employees build their own cars at Victress.  He mentioned that Alton Johnson built his LeMans Coupe there, Mel Keys built his Victress C3 Coupe there, Howard Green did the same with the car we’re discussing today.  Merrill also said that another customer built his car there.  This was a person who had worked for the “Powell Brothers” building the “Powell Pick-up trucks.”

Both Merrill and Mel can confirm that Howard not only built his car during his time at Victress, but Mel remembers that he drove it home to Mississippi as well.  That must have been one “Extremely Cool Mother” of a car.

Howard Green – where are you?

I’ve done some preliminary research around Jackson Mississippi and found information supporting a school teacher named “Howard Green” who lived in the area.  But so far, I’ve not had any luck finding him or his family.  Anyone up for some help in locating Howard Green and/or his family? 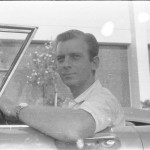 Great thanks to Mel Keys, Bill Quirk, and Merrill Powell for sharing their memories of Howard and his car.  And of course to Mel for taking – and sharing – the wonderful pictures.

Note:  2/15/2011:  Eric Schultz called in and had the following information to share about this car.   He thinks that the Studebaker chassis wasn’t used at all (although Eric confirmed the use of a Studebaker drivetrain in the pictures).  Instead, he believes that the chassis is custom made from a combination of Ford parts, channel, and round tube.  This would help explain why the front axle and rear axle appear to be Ford.

Here’s The Start Of Howard Green’s Car. The Studebaker Chassis Is Cut and Ready To Be Spliced. Mel Keys Noticed The Dash Here Is The Same As In His Finished Car.

What Fine Workmanship Went Into Building This Car. Lightening Holes Were Used Thoughout, and The Exhaust System Tastefully Exited On The Passenger Side Through The Rocker Panels. 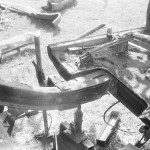 So Much Can Be Seen In Pictures At The Victress Factory. Here’s Howard’s Car With Ford Wide-Five Rims Installed. In The Background Is The Victress C3 Mold And A C3 Body Curing. Mel’s C3 Is Also Shown Here.

This Picture Is Not In The Best Condition, But Shows A Front Three-Quarter Picture Of Howard’s Car.

Here’s A Rear Three-Quarter Shop Of Howard’s Car At The May Company Building in North Hollywood, California. 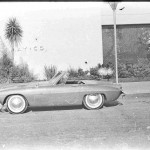 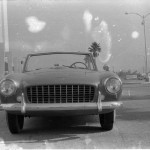 Here’s The Only Picture Of Howard Green That Mel Has Found So Far. Mel Is Standing Close To The Car, And Howard Is To Mel’s Right.

Here’s A More Recent Shot Of The May Company Building Where The Final Pictures Were Taken In 1955 or 1956. 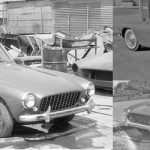