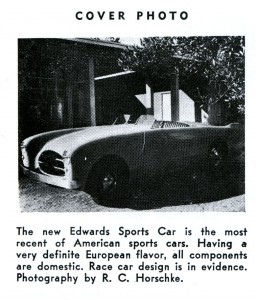 Which is ironic because you can count the number of individual American sports cars from 1945-1950 on probably just two hands.  These “babies” were rare back then, and are like “vapor” today – you can barely find the ones that are around.  And very few talk about the history of American sports cars in the immediate postwar era too.

So why do we talk about them here?

The reason is that the history from 1945-1950 of American sports cars is critical to appropriately understanding the “build-up” to the fiberglass bodied sports cars we love in the ‘50s.  To understand one group – you have to understand the other group.  In this case, we know where to look for the right answer on the proverbial “chicken and egg” question.

And…. that’s what we’re trying to do here at Forgotten Fiberglass.  So off with our story.

The era from 1945 through 1950 was “heady” in terms of talking about sports cars in America.  World War II devastated the production of cars in Europe, so while cars were being designed and built there – production and in some cases “design,” lagged.  But what was happening in America in terms of the development of these cars?

The names of the “players” during this time are familiar – and not so familiar.  But one group that didn’t participate were the manufacturers from Detroit.   Instead, sports cars were being developed by folks like Frank Kurtis, Paul Omohundro, Norman Timbs, DM Nacional (Mark Wallach), and just a few others – very few.

Which is why the Edwards Sports Car’s introduction was so important in 1949.

It marked one of the first times in the immediate postwar era that a sports car was built, celebrated, and held out as a promise of what was going to come to America.  It heralded the new age of creation and design – and it was built to race, too.   The fact that early American sports cars were often “dual-purpose” cars and in many cases were driven to the race they were going to participate in, is a strange notion for us today – but true in every way for the ‘40s and early to mid 1950s. 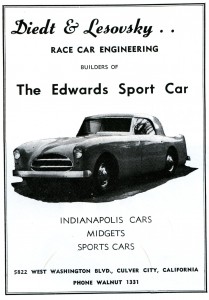 I’ve been wanting to cover this car for some time for the reasons I’ve outlined above.  And we’ve assembled a crack team of people who have helped us learn more about this car – one of them being Phil Remington who participated in a significant part of the build of this car (the Edwards R-26 Sports Car) back in the late ‘40s.

Also included in this team is Chuck Tatum who worked for Sterling Edwards in the early and mid ‘50s, Bob Whitmer who was a lifelong friend of Sterling Edwards, and Alden Jewell – consummate automotive historian.  We’ll have lots to share about this special car in the near future.

Another reason for covering this now is that the car is coming up for auction in November 2011.  Click here to read more about the car and the auction near Chicago, Illinois. It’s an exciting time to learn about these early postwar American sports cars, so let’s take a look at what Road & Track had to say about one of America’s first postwar sports cars in late 1949.

Skiing is usually not associated with automotive design, yet, it was during a trip to the famous slopes of Saint-Moritz that the inspiration for the Edwards Sports Car began.  After observing the fine roadability and sheer beauty of European sports cars, Sterling Edwards, Beverly Hills sportsman, returned home with a burning desire for an automobile of this type.

After carefully considering the characteristics of foreign sports cars, Edwards decided his car must have comparable appearance, performance, and roadability.  On the other hand, he felt the American roads, drivers, and economic conditions differed so drastically from those on the continent as to make design changes advisable.

Lower gasoline prices and taxes in America obviated the necessity of extremely small engine and chassis size.  Availability of vital parts was another important consideration.  Being a creative individual, Edwards decided to design and build his own car.  The famous firm of Diedt and Losovsky, race car engineers, was chosen to build the new design and Norman Timbs was selected as mechanical engineer.

Chassis specifications read like a blue book of European design.  The rigid frame uses large diameter tubing in the BMW manner.  All four wheels are independently suspended.  Front suspension is by parallel arms and springing is by low rate coils. 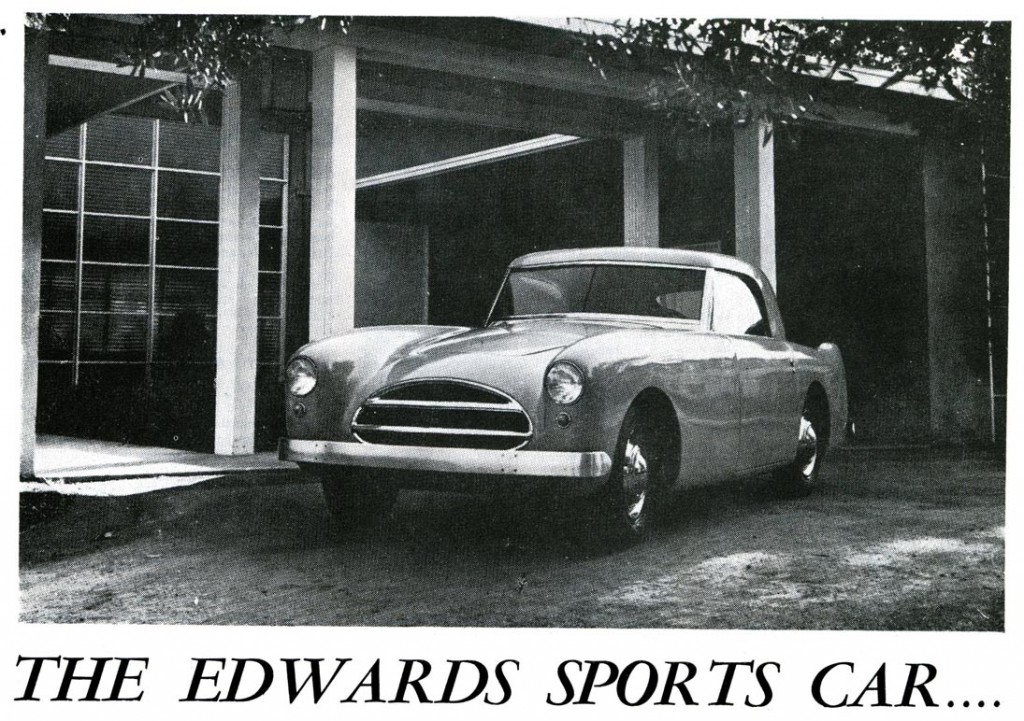 A flavor of Mercedes design is shown in the drilled members and steering linkage.  Trailing arms and torsion bars are used at the rear.  The “old reliable” of midget racing, the Ford V8 “60”, was selected because of its proven ability to withstand high speeds for long periods.

The engine was modified and built-up by Eddie Meyer Engineering.  Although the stock Meyer-Ford unit has a displacement of 153 cubic inches, it may be sleeved to 2 liters (122 cubic inches) for competition in European Formula 2 events.

Power is transmitted via a heavy duty clutch and transmission to a drive shaft running over the frame.  The differential unit is mounted directly on the frame, driving to each rear wheel thru cardan shafts and universals.

Many automotive authorities who have viewed the Edwards Sports Car have enthusiastically declared it to be “the most beautiful automobile ever built in America.”  Using the best of European styling as a guide, a careful blend of artistry and practicality has been made.

Of all-aluminum construction, the body incorporates design features proven by years of grueling race car experience.  A generous four-passenger, the Edwards is roomy even by American standards.  The metal top, upholstered with leather on the inside, is quickly and easily removed.

When not in use, the rear seat is covered by a quick detachable deck which converts the car to a sleek bi-posto sports.  For competition events, the curved windshield may be replaced with racing shields in a matter of minutes.

Runyan, noted for custom interiors, has created a pleated all-leather upholstery ensemble which lends the finishing touch to the elegance of the chef d’ oeuvre.  Padded crash pads encircle the cockpit for safety at speed.  Although the prototype was built by Edwards as his personal project, a careful study is being made of the market with view to producing the car in limited quantities.

Although the article discussed possible production of this car, just one 1949 Edwards sports car was ever built,  and this first Edwards sports car would later carry the designation R-26 – the only R-26 ever built.  Phil Remington shared with me that the R-26 only appeared in 5 or 6 races, before the body was removed in the early 50’s and given to a good friend of Edwards’ in Chicago, Illinois.  More about that in a later story here on Forgotten Fiberglass.

Stirling wanted to use the original chassis from the R-26 on his next sports car – one that would utilize a new aluminum body built in 1952 by Jack Hagemann for racing.  It was lighter, smaller, and was not designed with a road worthy “sports car” in mind.  The dual-purpose nature of this second iteration of the first chassis would leave that heritage behind, and focus on racing only. 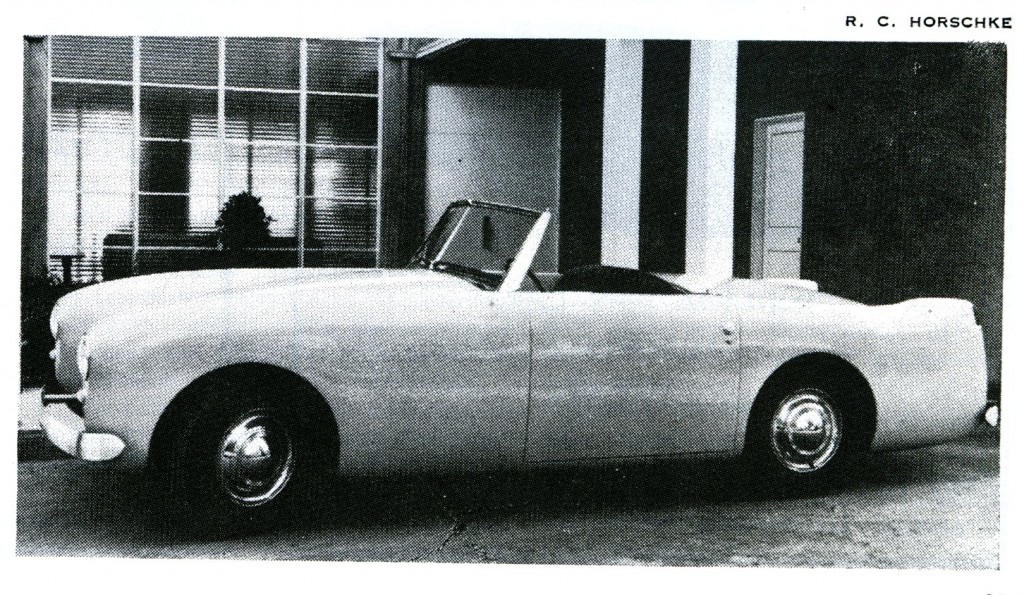 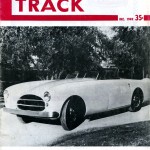 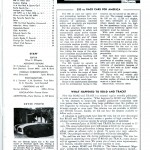 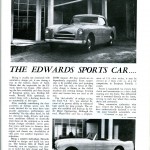 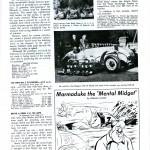 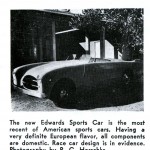 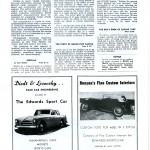 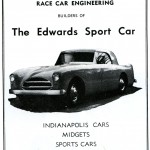 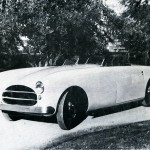 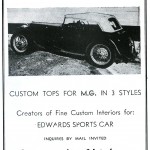 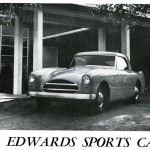 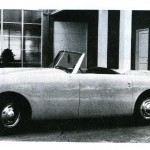 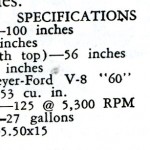 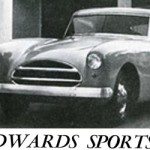