Today’s story is a result of an e-mail I received from Don Anderson (click here to learn more the Sportstar built by Don’s father) and a posting on “Bring A Trailer” as to a “mystery car” needing a history to match.  Click here to review the “mystery” at “Bring a Trailer.”

The sports car called the “Story,” was built by Tom Story in Oregon and was the precursor to the finely designed and hand-crafted specials built across America at the time.  But Tom had it tough – he did his in metal.

In less than one year fiberglass bodies such as the Glasspar, Lancer, and Skorpion would become available, but chance favors the brave and Tom built and designed his car – much to the enjoyment of an appreciating public who fawned over his creation – here on the cover of Road & Track Magazine in January ’51.

Let’s see what Road & Track had to say: 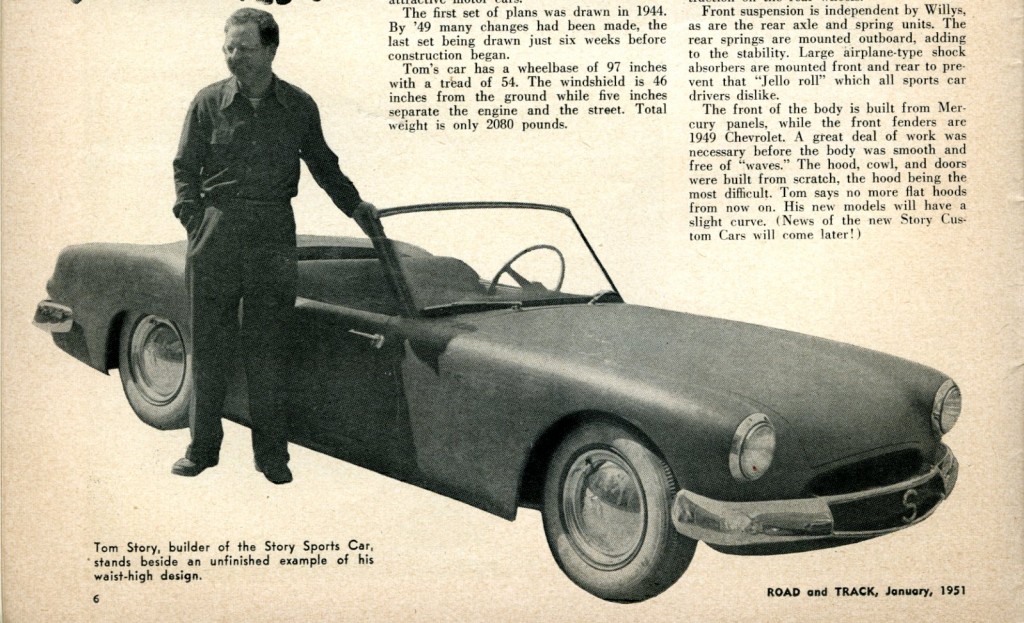 Tom Story, bodyshop foreman at Francis-Hopkins Mercury dealers in Portland, Oregon, was facing a problem common to many of today’s young men.  He wanted to own a sleek sports car.  The elegant cars from the foreign lands were very nice but in 1944 the world was thinking of matters other than attractive motor cars.

The first set of plans was drawn in 1944.  By ’49 many changes had been made, the last set being drawn just six weeks before construction began.  Tom’s car has a wheelbase of 97 inches with a tread of 54.  The windshield is 46 inches from the ground while five inches separate the engine and the street.  Total weight is only 2080 pounds.

The engine is a modified Ford V8 60 which stables 113 fast horses.  With Offenhauser heads, the compression ratio is 10.5 to 1.  Twin carburetors are used on a dual manifold.  The powerplant is mounted sixteen inches back from the front of the frame to insure proper balance and good traction on the rear wheels. 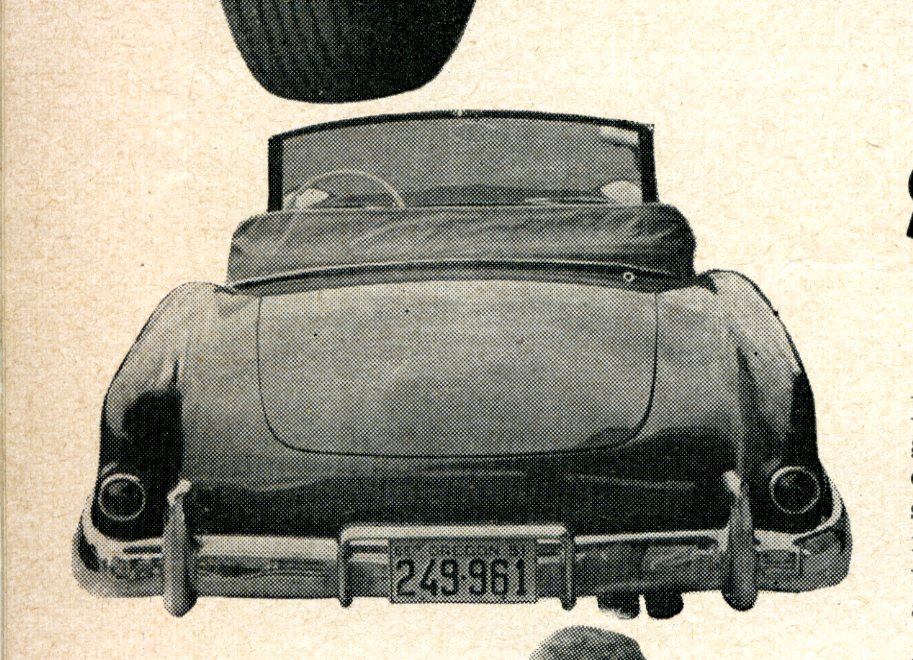 Front suspension is independent by Willys, as are the rear axle and spring units.  The rear springs are mounted outboard, adding to the stability.  Large airplane-type shock absorbers are mounted front and rear to prevent that “Jello roll” which all sports car drivers dislike.

The front of the body is built from Mercury panels, while the front fenders are 1949 Chevrolet.  A great deal of work was necessary before the body was smooth and free of “waves.”  The hood, cowl, and doors were built from scratch, the hood being the most difficult.

Tom says no more flat hoods from now on.  His new models will have a slight curve (news of the new “Story Custom Cars” will come later!).

The frame is built from ten gauge chrome-moly channel steel with units of the floor and body being welded in box-like construction.  This makes for great strength and keeps the weight low.  Kick-ups at both end of the frame lower the seat and floor line. 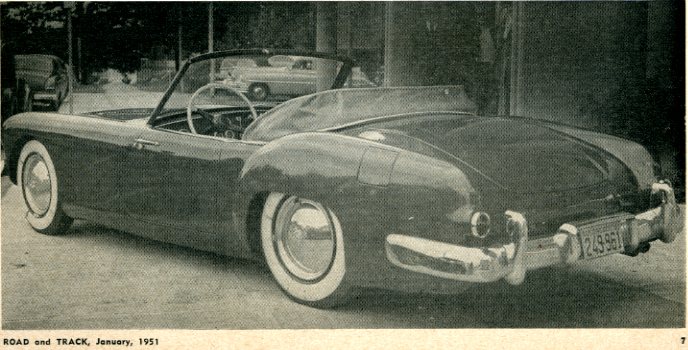 The drive shaft tunnel is used as a central armrest.  For high speed work a built-in grab-bar is provided the passenger.  Sound deadening material has been sprayed onto the bottom and interior of the body.  To reduce rattles the hood has also been sprayed.

The steering gear is Mercury but has been modified to give two and one half turns from lock to lock, thus providing faster steering for high speed driving.  The gear shift has been mounted on the floor, where it belongs, sports car style.  Better speed shifting is the result.

The upholstery has been done in dark yellow leather and is trimmed in white.  A dark blue carpet is used in good harmony with the blue finish.  The spare tire is carried in the rear where there is also room for a small amount of luggage.  If more space is desired, rom may be found at the rear of the seat. 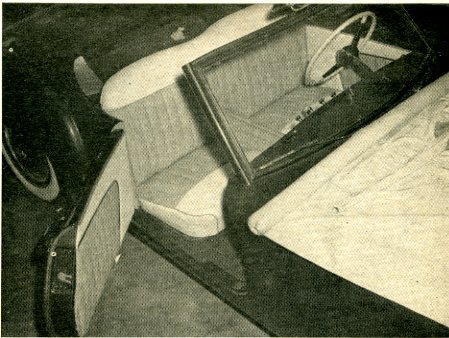 Wrap-around type bumpers, both front and rear, provide good protection against the well-known American “bumper-bump” type of driver.  Styling follows the Italian school with the low flat hood and high fender line.  The top, roadster style, is somewhat high but has enough headroom for a six-footer.  It is white and may be lowered or removed completely and stored.

The top speed is about 105 mph at 6500 rpm.  In tests, the engine has wound to 7400 rpm.  Safety at high speed was a major consideration in design…a right angle street corner may be taken at 55 mph without undue skidding.  Tom sold this car and is now building a new four-seater on a 102 inch wheelbase.

Springing on future Story Custom Cars will be torsion bar front and rear.  Owners may have a choice of the larger engines such as Mercury, Oldsmobile, or Cadillac.  Price will be “about” $3500 in Portland, Oregon, and the line forms to the right.  Excuse me, I wish to be near the front. 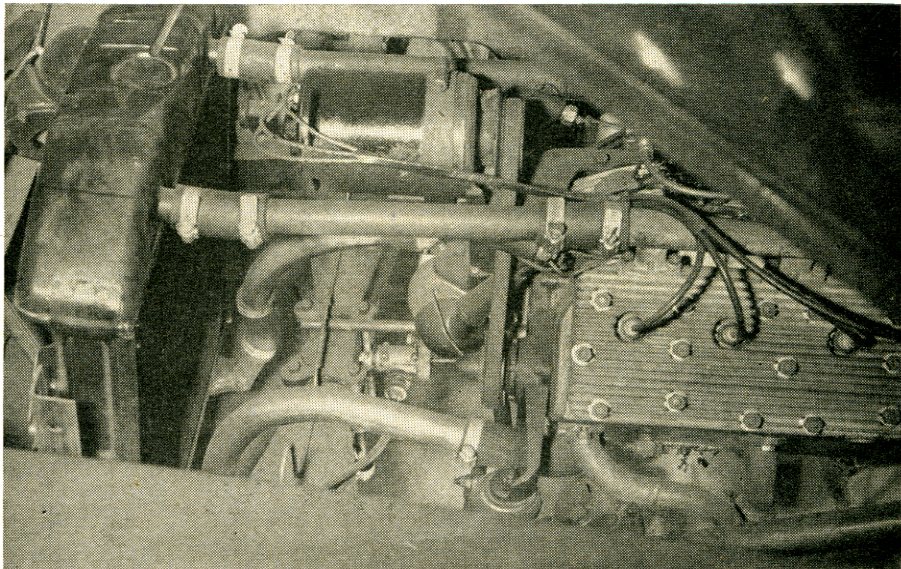 So far, the research I’ve done revealed only one Story sports car – but the article talks about another one in development.  Hmmmmm… I have a lead on Tom Story’s family in Oregon.  I wonder what they have in the garage?

The adventures of research in the making 🙂 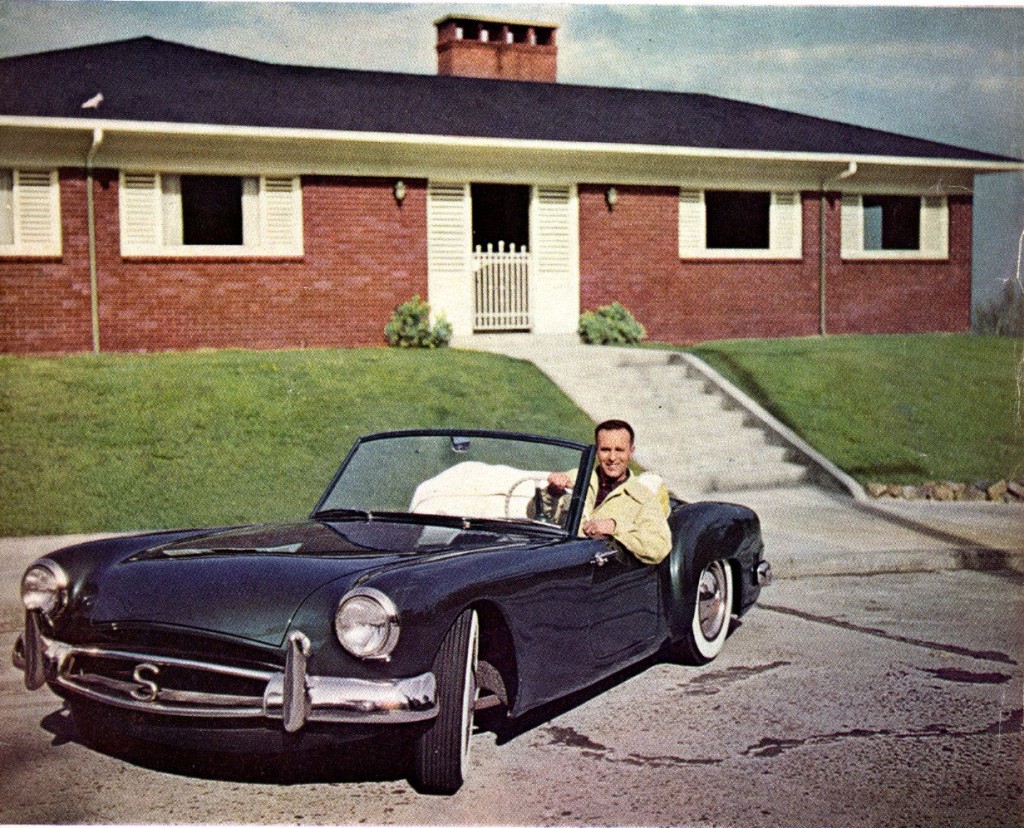 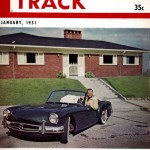 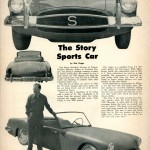 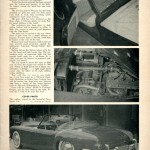 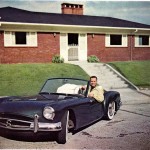 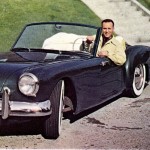 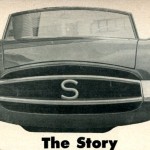 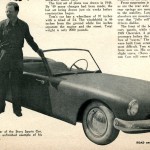 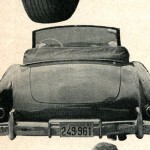 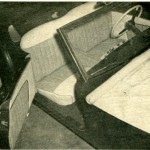 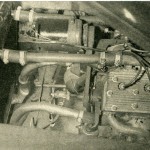 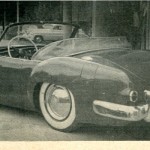 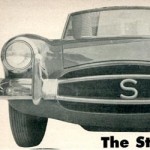