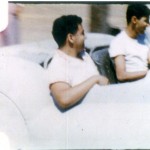 Wayne Kady and Friend Enjoying Drive of Sport Custom – Circa 1954

I have the greatest respect for people who can create, build, style, design, and conceive of nearly anything in their head and put pencil to paper.  These are a very special breed of people.  I, on the other hand, had to learn to type because my handwriting was so cryptic even I couldn’t understand at times what I wrote.  I would strike fear into the hearts of men if I ever tried to design something that wasn’t made to assemble in some fashion purchased from Ikea…

I scour magazines, new and old, in search of history of cars and the men who built them.  When I come across articles concerning designers and stylists – I take notice.  And I was simply amazed when I read the April 2001 issue of Collectible Automobile which featured a “Personality Profile” on Wayne Kady.  Wayne had been to Art Center in the 1950’s, and a student of Strother MacMinn.  He spent nearly 40 years with General Motors, and the first car he was involved with was the 1965 Cadillac.  He worked in various studios for both Cadillac and Buick before retiring in 1999.

But that was his professional career.  What I was fascinated about was reading about what he did before all of this began.  Specifically, two questions in the interview garnered my attention as follows: 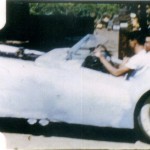 Great Side Shot Of Car – I Like The Long, Low, Lean Lines of This Sport Custom In Every Way. Nash Power Too!

CA: When did you first become interested in car designing?

Kady: When I was a kid, living on a farm.  We lived out in the country, so the first thing growing up you want to be mobile.  And, you can’t borrow your dad’s car all the time, so the first thing you want to do is buy a car.  And back then you could get a driver’s license when you’re 14 if you lived on a farm in California, so I’ve had a drivers license since I was 14.  In fact, I got a learner’s permit when I was 13.

And I love to draw cars, and back then cars were simple and they’re so graphic that you can almost from memory draw just about every car in General Motor’s lineup.  Same thing for Chrysler and Ford.

CA: What year would that have been, roughly?

Kady: About 1949 and 1950.  In grammar school, I used to be able to draw all the cars just from memory.  And then in high school I arranged my classes so that I could build a car.  I kind of sketched it in an art class, and then I had a welding class where I learned how to weld, and then I took a mechanics class where I took an engine apart, and a transmission, and parts like that, learned how they worked and was able to reassemble the parts and see how they ran.  I never totally finished the car but it gave me a lot of experience. 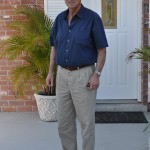 Wayne Dropped By Down For A Visit Earlier This Year At Forgotten Fiberglass Central – Tampa, Florida.

Kady graduated from high school in 1955, and started at the Art Center in California shortly thereafter.  But….that wasn’t the best part of the story.  There…..were…..pictures!

Not a lot, but enough to see that this was going to be one fine metal sport custom.  What great fun must this have been for Wayne, and I had to find out more.   A few hours later, I was on the phone with him and we were talking cars.  Who said research was all hard work!

It turned out that Wayne was more than willing to help document his early plans on building his own sport custom.  He had some stills taken out of a color film roll that his family still had, and was willing to sketch some of his ideas from the times to show what he had intended to completely build.

And…he’d tell me in person.  Wayne and his wife spend their Winters in Florida just miles from my home.  I would have to wait until when they traveled to Florida in the Winter, but that would be fine.  I would get to meet Wayne and spend some time getting to know him as well.  Time well spent in every way.

When we got together over drinks at the Winghouse Restaurant nearby, Wayne handed me a packet with a letter reviewing how he built his sport custom from around 1953 to 1955. Let’s take a look at what Wayne’s penned in his letter about his car (scroll below pictures): 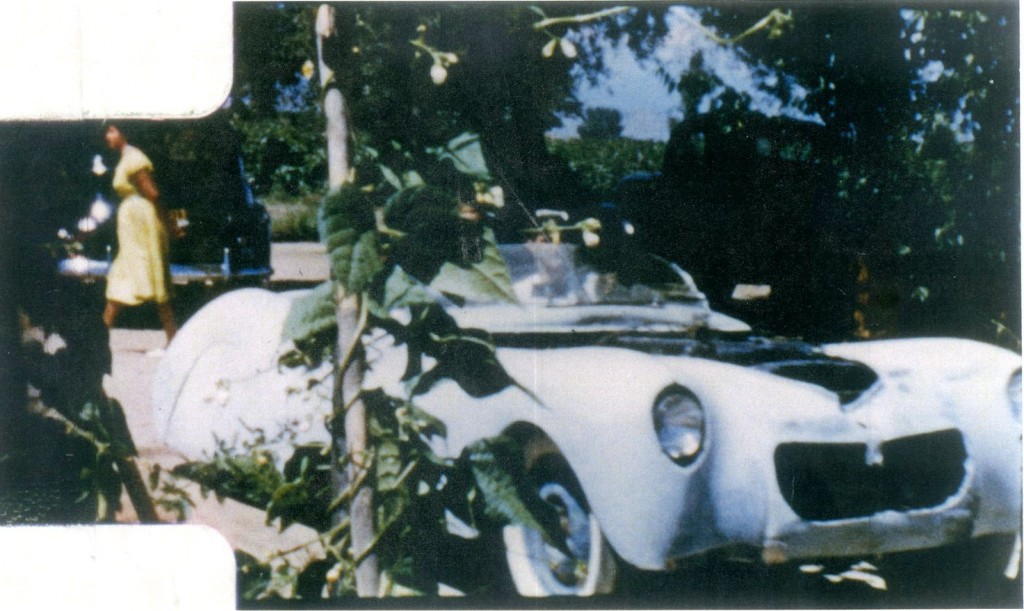 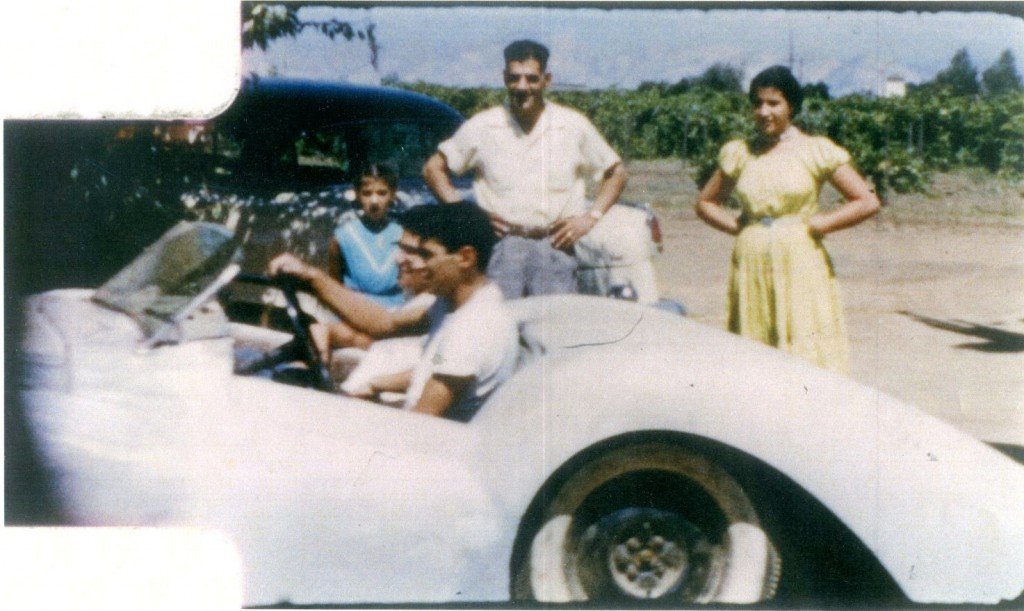 This is the only photographic record I have and unfortunately the photos don’t show the whole car.  I hope the sketches help to give you an idea of the parts used to create the look.  Inspiration for this project was from seeing the XK120 Jaguar.

Based on a ’40 or ’41 Willys sedan that I purchased from a fellow auto mechanic student for 12 dollars.  The body was removed from the chassis, the front fenders and the sheet metal surrounding the grill area was retained from the front wheel, center forward.

The 4 cylinder Willys engine and transmission was traded at a wrecking yard for a Nash 6 cylinder with dual firing and 3 speed with overdrive transmission.  That required the X member in the frame to be cut away to accommodate the longer powertrain.

The rear fenders are from a late ‘30s Lincoln Zephyr.  The deck area was firmed using the Willys roof panel.  The cowl came from a mid ‘40s Ford pickup.  All the other sheet metal was hand formed and welded together, and then finished with lots of bondo – which was “new” for the time.

I made this a high school project, while I learned auto mechanics welding, and the art classes helped me create the look from parts I found in wrecking yards.  This car was never finished and when I left home to study automotive design at the Art Center School in Los Angeles.  I had left it covered and parked under a large olive tree in back of the family home in Reedley California.

A couple of years later knowing that I wouldn’t be coming home again to finish it, my father sold it.  Unfortunately we did not have a camera and the only record of this effort was taken by my aunt with a video camera (film) around the summer of 1955 or ’56.  And as a result, I’ve got a partial record.

If you need more information, I would be more than happy to talk to you about it.

Sketches of a Long Lost Design:

With a guy like Wayne, just because the car is not here, doesn’t mean we can’t do the next best thing.  Let’s see what it looked like based on his memory.  Wayne sent the following 5 sketches to us to share (Wayne…you have to autograph these next time you’re down here….*wink*).  Here they are – there are 5 sketches with annotations below.  If you click on each picture, it enlarges on your screen (that’s true with any picture on our website – even the small ones, gang.)  The story continues below the sketches: 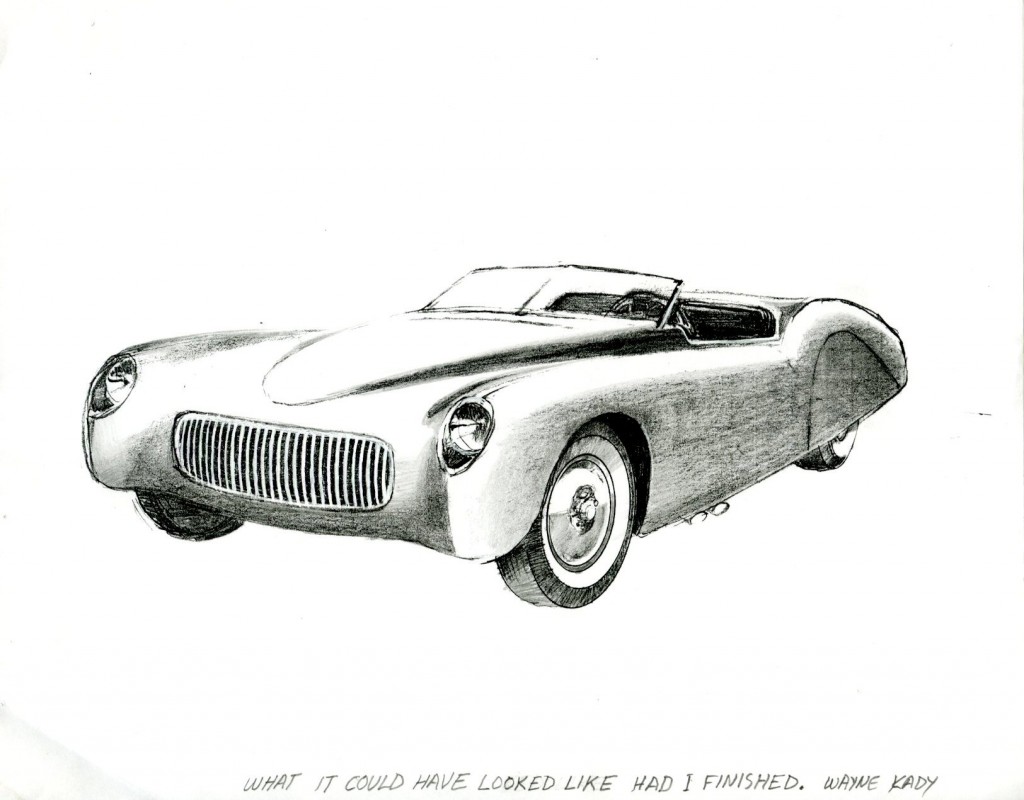 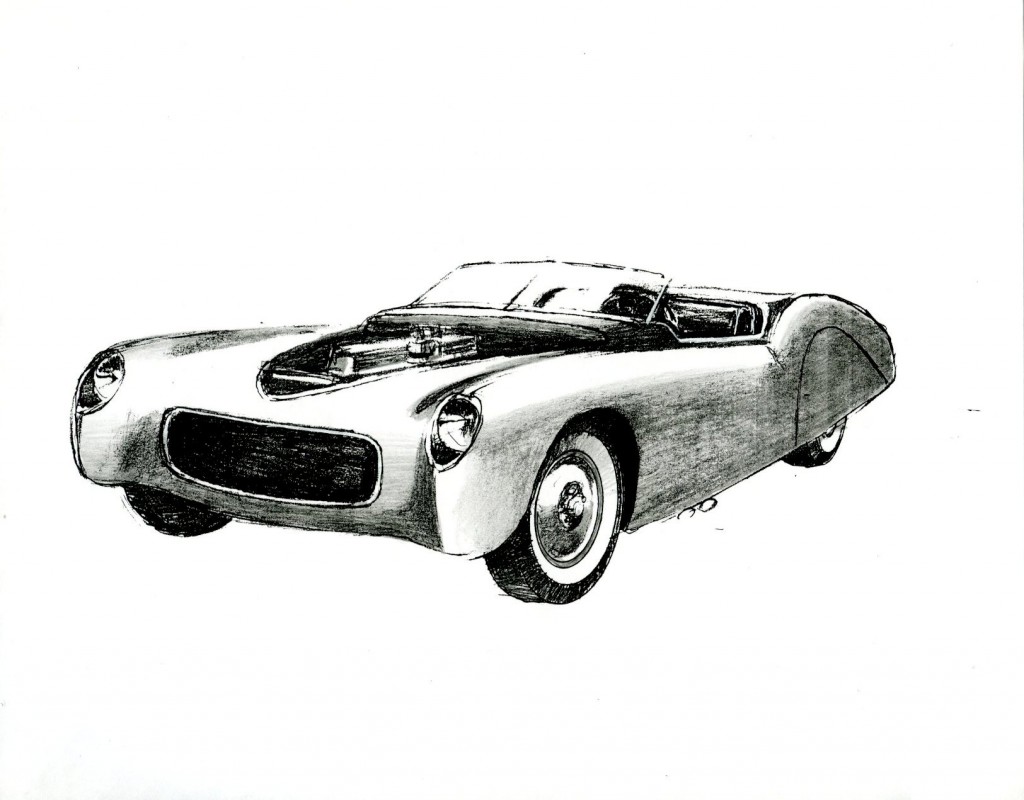 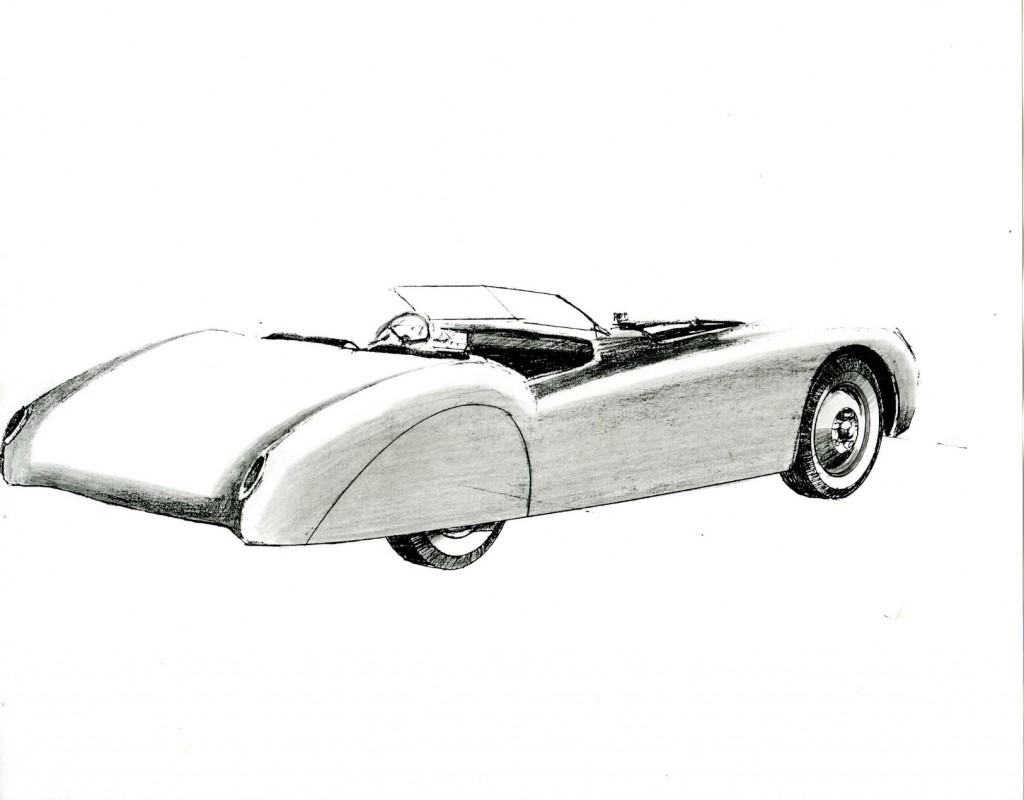 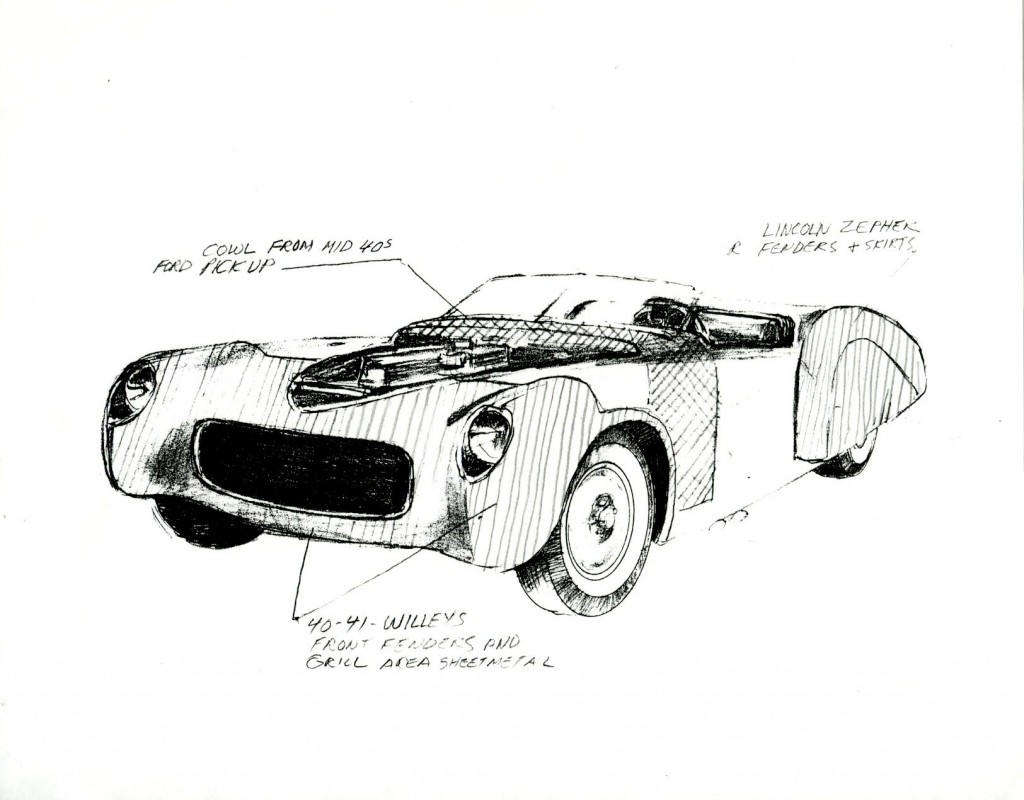 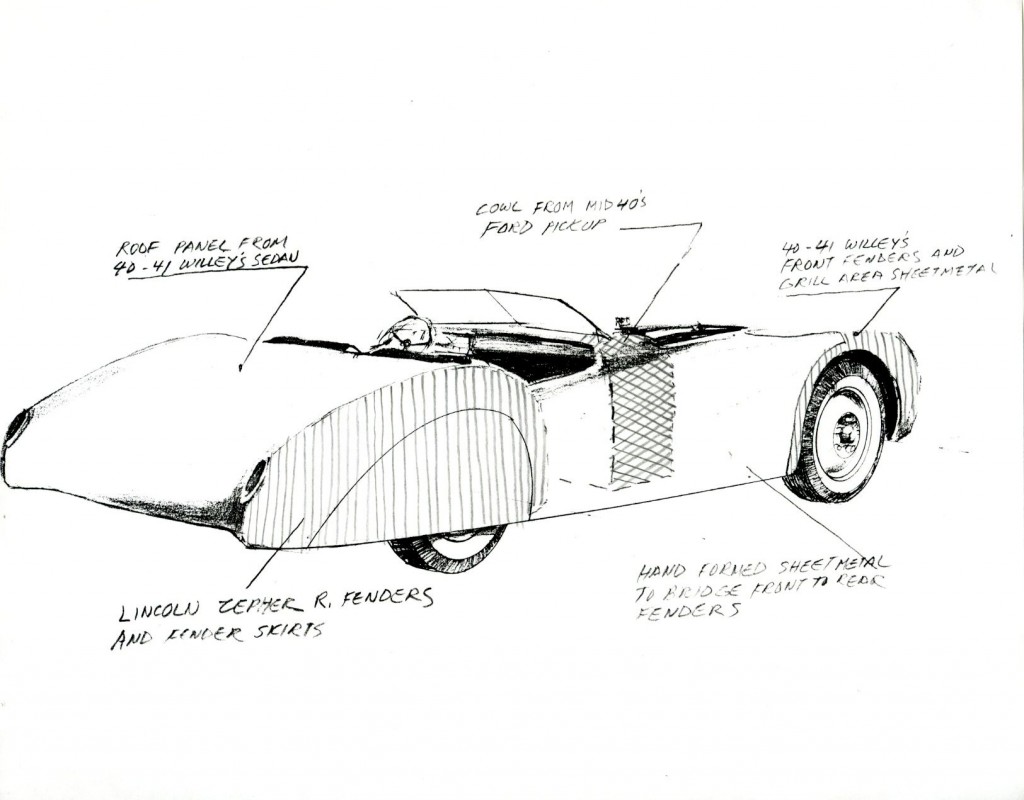 Thoughts and Musings – Are We On The Trail To Finding This Car?

Wayne represents in word, deed, and action what every young American male wanted to do back in the ‘50s – design and built his own car.  And he did it!  And….we have a record of his thoughts and actions during the time, too.  For every 100 stories and cars lost to time, Wayne’s story represents them best of all.  Now all we have to do is find his car.

And maybe we’re on the path to doing so.

Several years ago, good friend Dick Feeney in Wisconsin sent in photos he’d taken of sport customs back in the ‘50’s – and one of them looked just like Wayne’s car.  And it was from California too.  Checkout these photos below.  Did someone else finish Wayne’s car – and modify the front too?  Looks like the headlight area has been redone.  Here are the pictures: 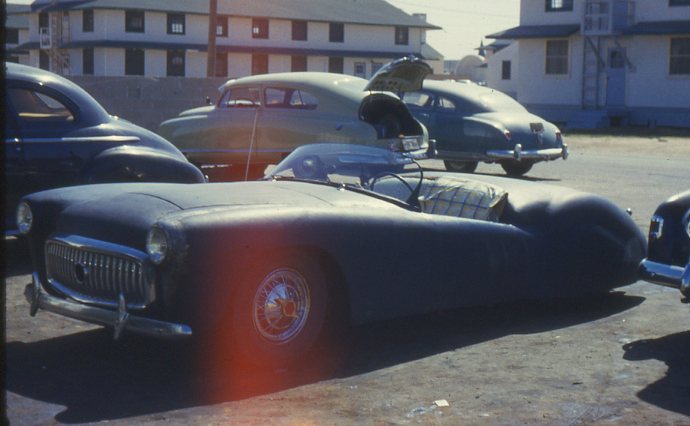 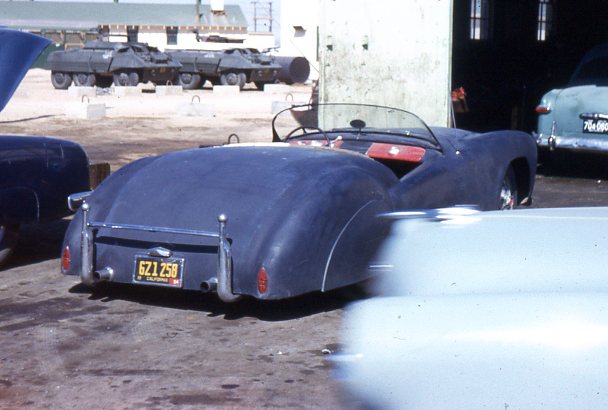 So…..clues exist and the car looked like it may have been finished, and it may be out there gang.  You know me…the eternal optimist.  Then again….I’ve found many of these long lost – – written off – thought forgotten – cars before.  So join me in the hunt and beat me to the prize.  I’ll be your biggest fan and buy the first round of drinks to celebrate.

And I bet Wayne Kady will be there to join us 🙂

If we find it, the timing may be perfect.  Wayne has promised to bring the film down or share the full video of his sport custom from 1955 when he returns to Florida this coming year.  So be on the edge of your seats gang….I should have some video to post of his car from 1955 – and in color too.  Super cool!

Thanks again to Wayne Kady for his help in documenting his story and sharing it with everyone here.  Hope you enjoyed it as much as I did writing it, and until next time…

Wayne Dropped By Down For A Visit Earlier This Year At Forgotten Fiberglass Central – Tampa, Florida. 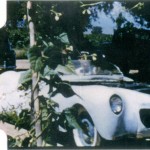 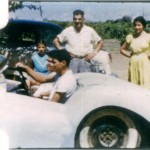 Great Side Shot Of Car – I Like The Long, Low, Lean Lines of This Sport Custom In Every Way. Nash Power Too!

Wayne Kady and Friend Enjoying Drive of Sport Custom – Circa 1954 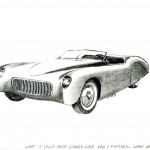 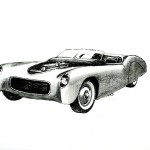 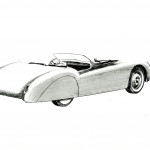 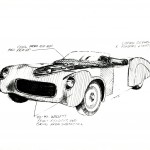 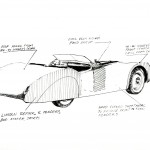 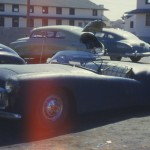 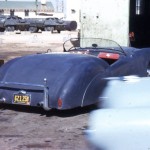 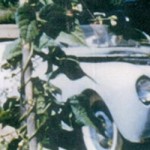