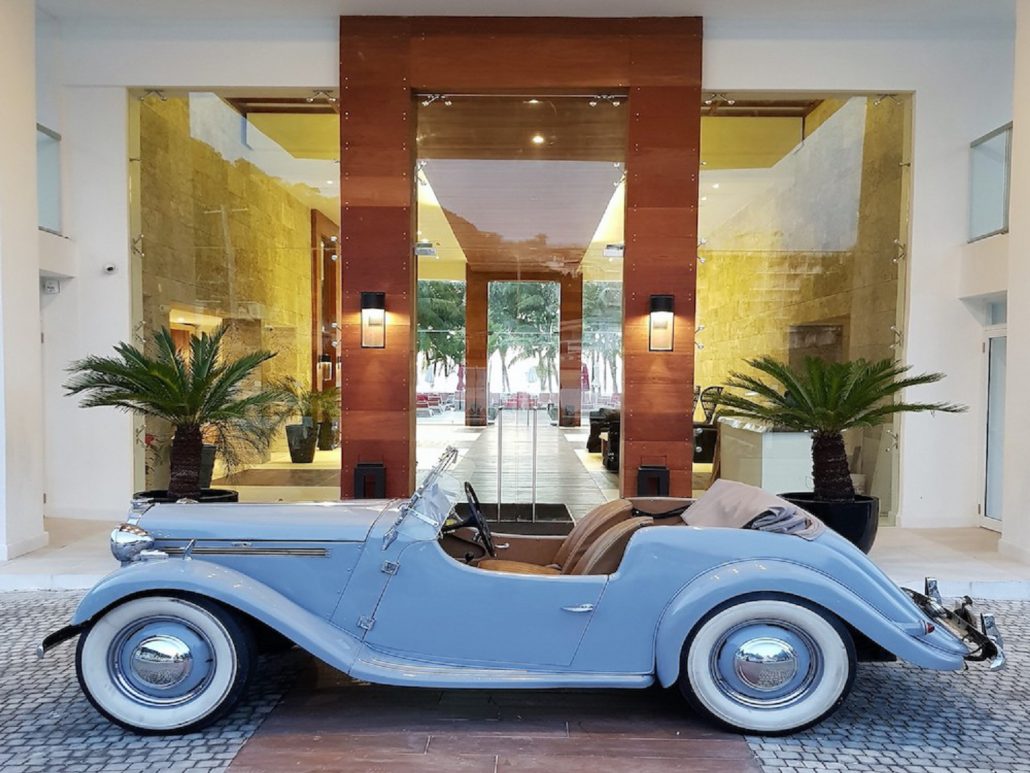 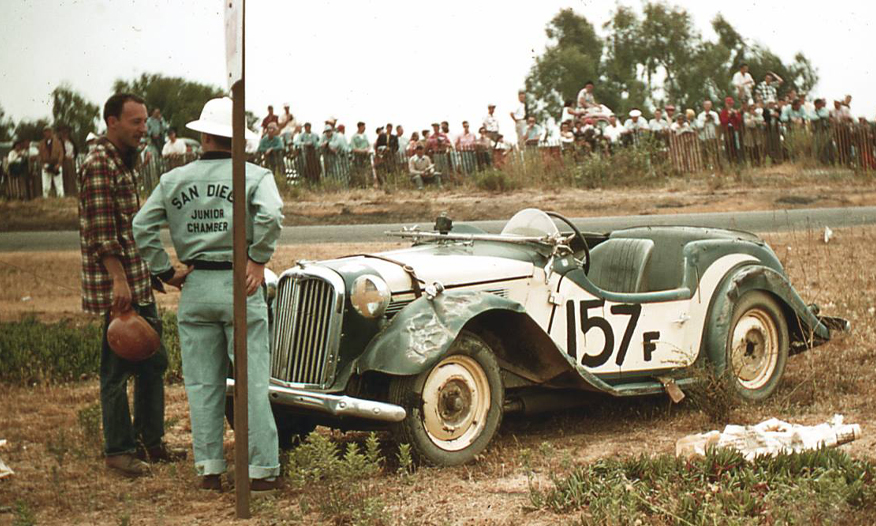 Ralph Bush — Singer Turn 3 Pomona, 1960. Bush, then an Industrial Arts teacher at Pasadena High School, still races serious racecars to this day. His Singer from the 1950s-60s, long stored in Southern California, was recently sold and will be restored.

The Agoura shots are from the 2nd Annual Singer Owners Club Hill Climb held February 6, 1955 at Tupper’s Ranch, Agoura California. Organized by the Singer Owners Club and assisted administratively by the Women’s Sports Car Club of California, it attracted over 2,000 spectators and 160 competitors. Among these was Duffy Livingston driving the “Eliminator” in what was probably its first public appearance. Other notables included Richie Ginther in a Healey and Bruce Kessler in a Siata Spider.

I believe this might be Robert McDonald at Agoura, but I’m not sure.

Mourning in his Singer leads Parsons in his Jowett Jupiter. In the background you can see cars approaching Turn 2, one leaves a trail of dust

Dick van Laanen in his Arnt and Buchanan built Singer Special at Santa Barbara, 1954. The MG beside him is J.P. Kunstle’s and the blue Special #190 is Forest Edward’s Morris Minor Special.

This one is Jim Mourning at Santa Barbara 1954. You may know that he was an automotive journalist and raced a number of different marques ( as did Bill Kerrigan).

In the photo of Bill Kerrigan at the Torrey Pines Road Races  December, 1952, the Porsche of  John Crean sits to the right. Josie von Neumann ( John von Neumann’s adopted daughter) also raced Crean’s Porsche to victory that weekend in the women’s races.

I think this might be Jack Crosby (Bing Crosby’s nephew) at Willow Springs 1st 1954. Can anyone confirm?

Here’s another shot of the Long Beach race, showing a better view of the Simca Special. As a guess, I think the most visible Singer driver is Dick van Laanen (he usually had Vaughan Singer Motors “SINGER” plates).

The photo is from a collecton of 8×10 promotional shots that Vaughan Singer Motors had done in the early 50’s. The venue is Reno, Nevada where Singer scored a First place win in the under 1500cc. production class in 1951. The winning driver was Bill Kerrigan. However, I have every reason to believe that he was driving car #22, not #44 which is pictured here receiving the checkered flag from Al Torres. The latter would have been driven by either Bill Quinn or Dick van Laanen

Use  On-Screen  Arrows  To  Move  Thru  Photos

Singer sports cars were well known across America in the early fifties. With an overhead cam, a powerful engine and a strong manual gearbox, they outperformed their MG counterparts in races from coast to coast.

Their success in the American market was largely due to the efforts of two individuals – Bill Vaughan in New York City and Monroe Gretske in Los Angeles, California. All Singers came to America through Vaughan Motors on the east coast.  He was a larger than life visionary who promoted custom-bodied Singers, Singer roadsters and other European sports cars in the largest automotive events of the day. Vaughan also created successful publicity events to promote Singer roadsters with ties to celebrity endorsements including Lucille Ball, Phil Rizzuto, Katherine Hepburn and others.

Gretske was the west coast distributor for Vaughan and focused on success through franchising, publicity and racing.  Gretske’s strong connections within the Hollywood community coupled Singers with prominent celebrities such as Marilyn Monroe, Sammy Davis Jr., Debbie Reynolds and others. His consistent support of Singer racing across America brought prominence to the marque and recognized performance. The combined efforts of Bill Vaughan and Monroe Gretske put Singer sports cars on the map with appearances at shows, races, publicity events and magazine articles month after month

From 1951 to 1954, just 3,440 “4AD” roadsters were produced in England – all for export. The majority were shipped to the USA making Singer sports cars a nearly unique American experience. It’s estimated that Singer sports cars comprised nearly 8% of all sports cars in the USA in the early fifties.  It’s an impressive mark when you consider the number of other sports cars being imported at the time.

In the USA and Canada, just 200 Singer 4AD sports cars are know to have survived to the current day.  For these reasons, Singer sports cars are recognized as one of the more rare automotive collectibles in North America today.

Want  to  Build  a  Singer  Special  With  Cisitalia  Body? 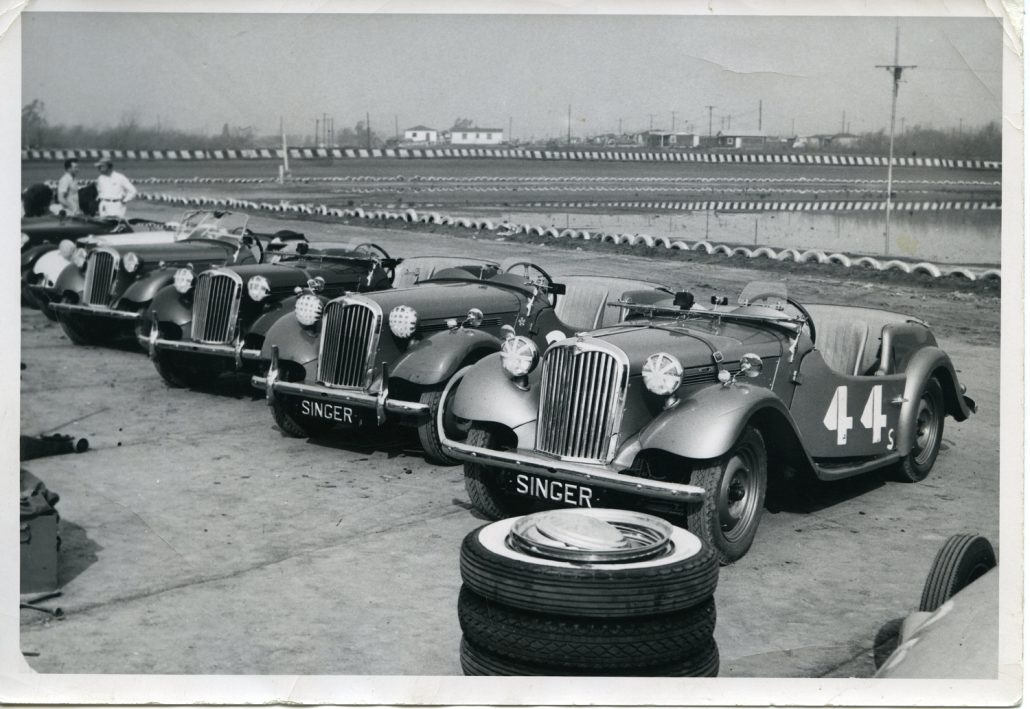