But the bulk of Ford parts available were post 1940 with column shifters.  What could an enterprising young man do to get what he wanted?  Well that’s the right question to ask, and today’s article shows you exactly how this problem was solved.

When Oliver Hine isn’t building a rod (R&R, April 1959), “Hine’s Varieties”) or off copping a Best-in-Show trophy somewhere, you can bet your fan belt he’s probably up to one of his old tricks – namely, conjuring up a new adaptation that will serve rodders in good stead.

Hine’s latest brainchild is, to be sure, a good bet.  The Charlotte, Michigan mechanic has come up with a neat floor shift setup made to fit any column shift car with two selector arms on the transmission.  What’s more the stint should prove especially appealing to rodders whose funds are more limited than their energy.

Any post-’40 Ford column shift assembly – readily available from the local junk yard – can be used for the conversion.  Also, needed are a hacksaw, welding equipment and a 3 or 3 and ½ inch U-clamp, depending on where the floorshift assembly is to be mounted on the transmission tail shaft.

When purchasing the assembly, make sure it is complete as shown in Photo 1. 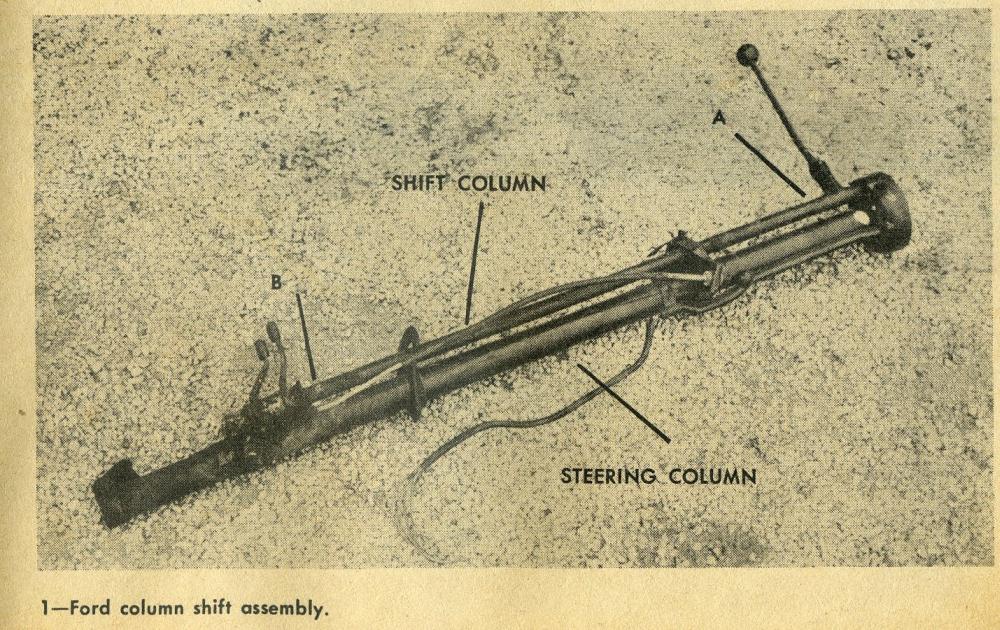 Weld both sections together in an angle iron jig, making sure both parts are as true as possible.  The selector pin hold should be at a right angle to the stick holder (Photo 2). 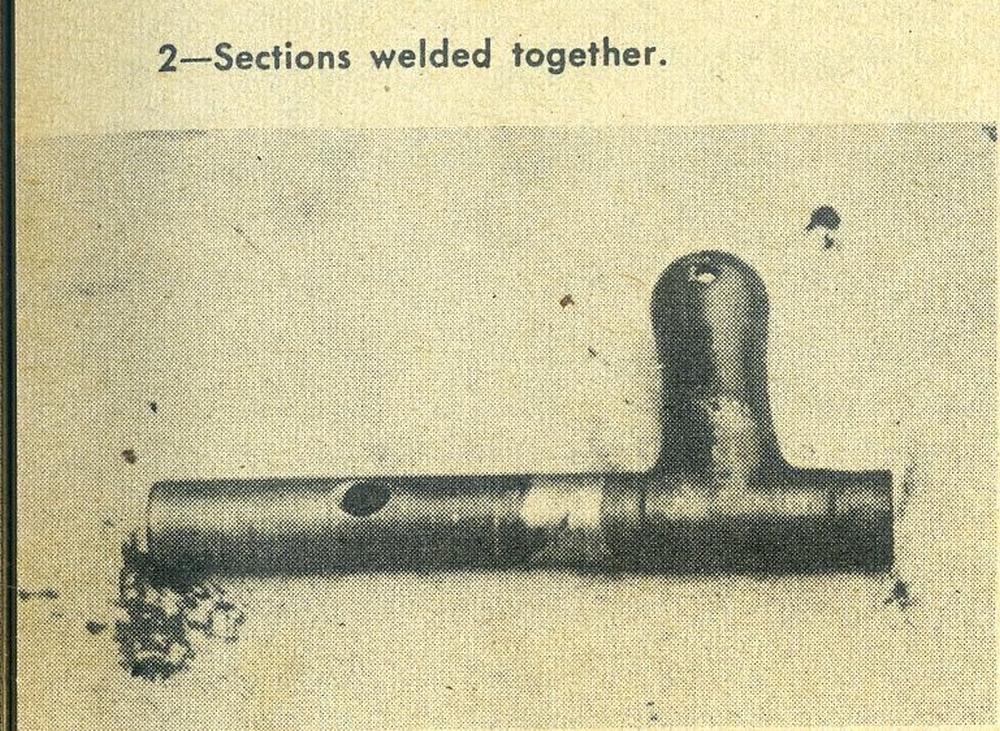 The stick holder, incidentally, projects at a slight angle from the shaft.  With the unit placed in the position shown in Photo 2, the stick holder should slant toward the viewer.  After smoothing off the weld seam, remove the shift rod spring retainer from the top of the old steering column, and to it weld a right angle bracket (Photo 3). 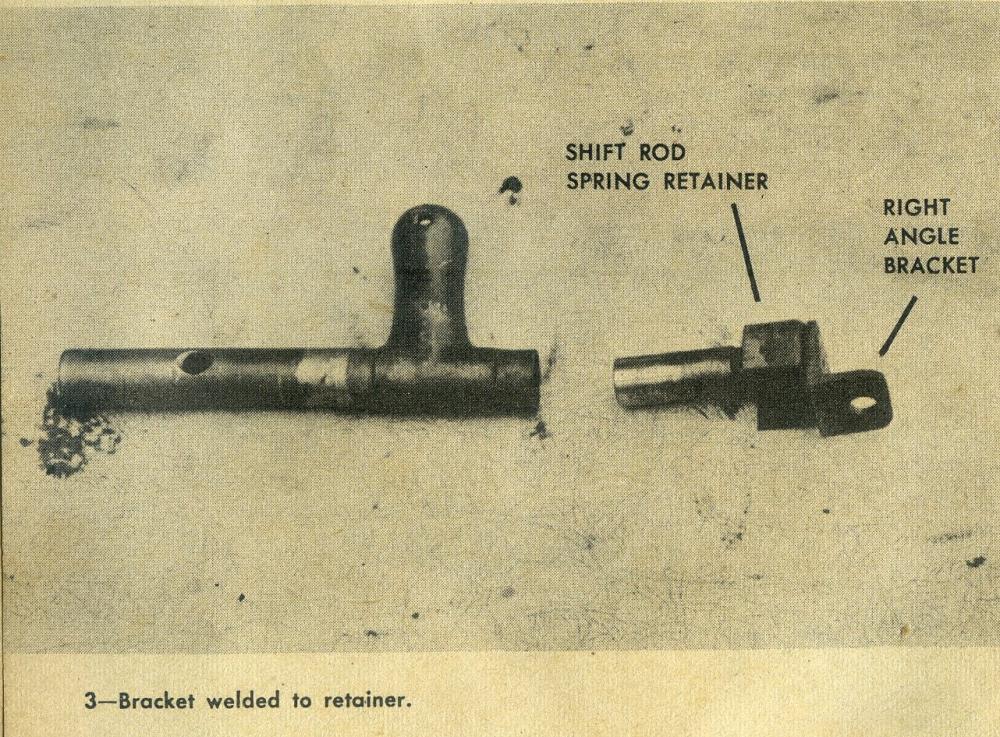 A hold is then drilled in the bracket to receive the bolt that will hold the unit in place when it is fully assembled.  A section of the steering column, welded to a 3 or 3 and ½ inch u-bolt clamp, provides a beefy foundation for the setup.  The section shown in Photo 4 was cut just below where the shift arms were mounted on the junkyard assembly. 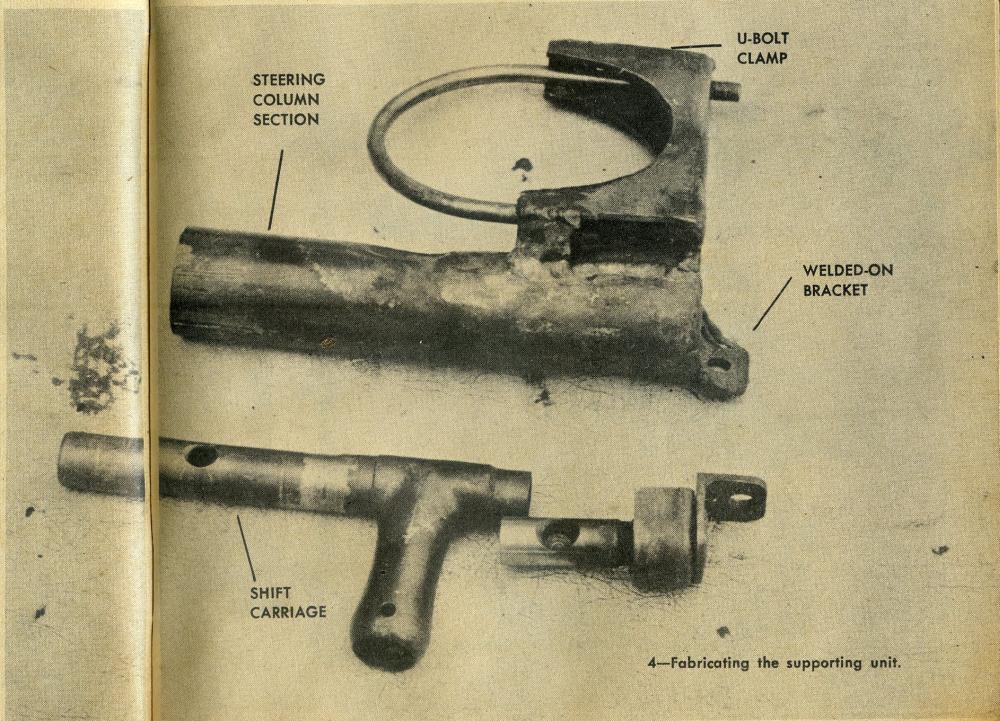 Photo 5 shows all the parts ready to be assembled: 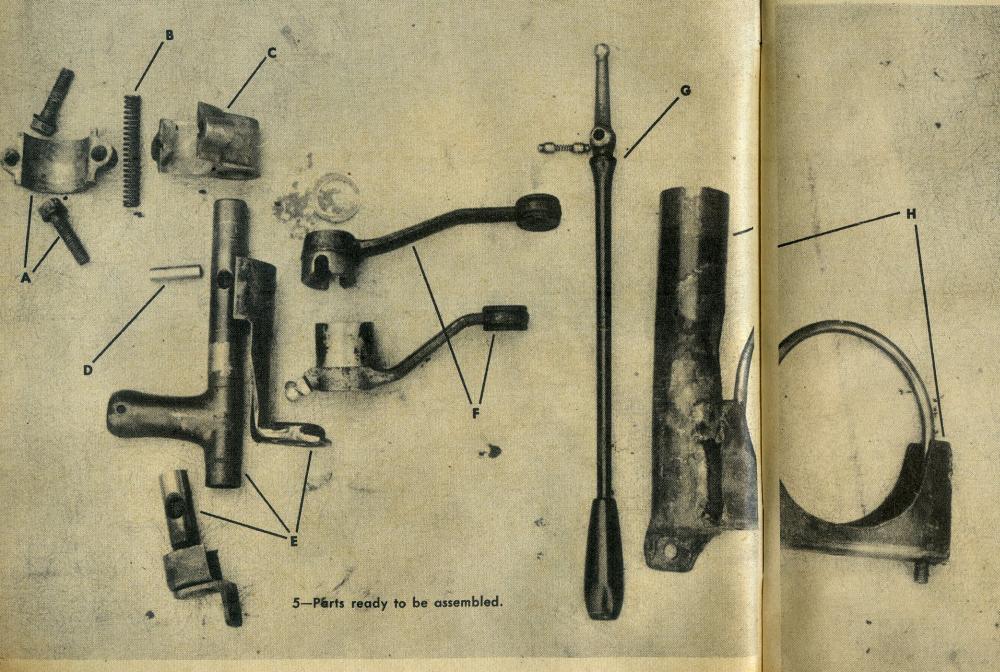 The assembled unit, as it would appear installed on the car, is shown in Photo 6.  From this it can be seen that, if the u-bolt clamp is welded too close to the shift arm, the arm may not be able to clear the tailshaft.  So be sure the clamp is welded enough to the right. 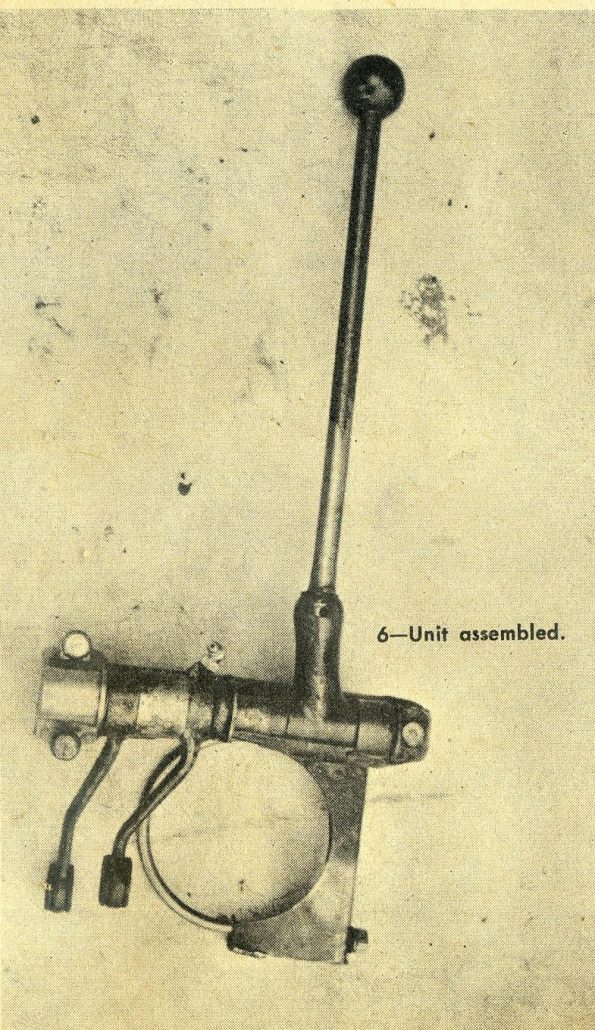 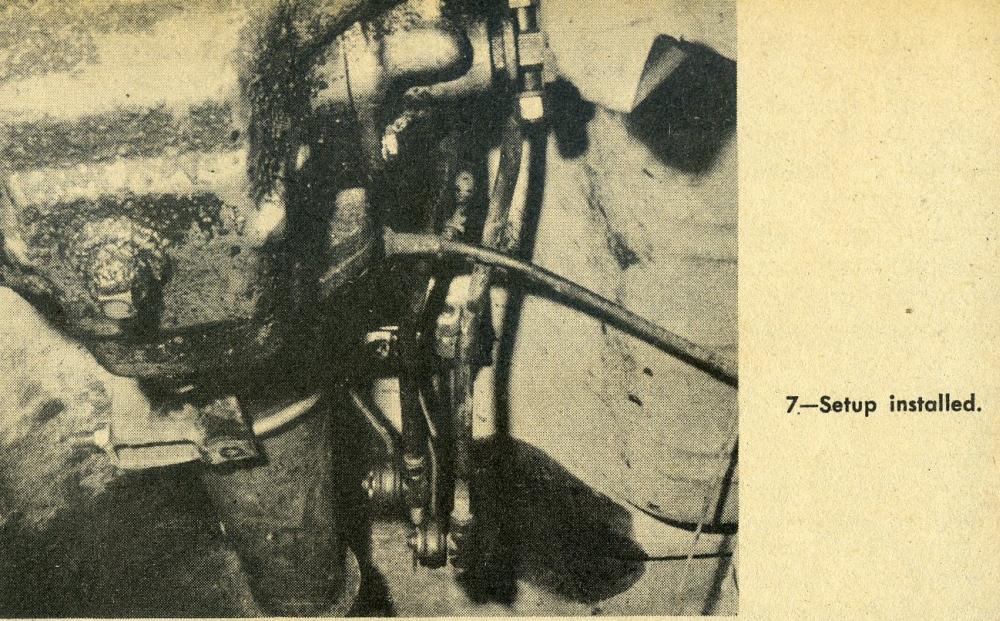 To prevent the unit from slipping on the tapered tailshaft housing, an angle bracket welded to the u-bolt clamp is anchored by the transmission-tailshaft bolt.  When making shift rods to connect shift arms with selector arms, us 3/8 inch cold rolled rod and use an adjustable clevis.

The clevis permits correct positioning of arms so that the shift selector pin will travel from first-reverse arm to second-third arm without binding.  When the unit is finally installed, a small section of the floorboard is removed to permit the stick to travel without obstruction.

One of the desirable features of this conversion is that the stick is centered on the tunnel, thus allowing plenty of room for the driver’s legs.  The unit may be positioned further forward or back simply by using a u-clamp that corresponds to the girth of the tailshaft at the desired bolt-up point.

For neater appearance in the driver’s compartment, a rubber bellows starter pedal boot – such as on a Chevrolet truck – can be slipped over the stick and positioned on the floor mat.  And with that you’ve got yourself a stick that’s slick, quick, terrific.

Great friend and master fabricator Ben Emerson converted a column shifter to a floor shifter as part of the restoration of our 1937 Gougeon Streamliner.  We had some challenges because this car is actually a mid-engine car with the shifting mechanism in front of the engine/transmission, but this involved just a reversing of the mechanism described in this article.

But the good news was that we followed this article and the shifting mechanism worked – and is period correct for installation in a 50s type sports car build.  Go get ’em fiber-gang! 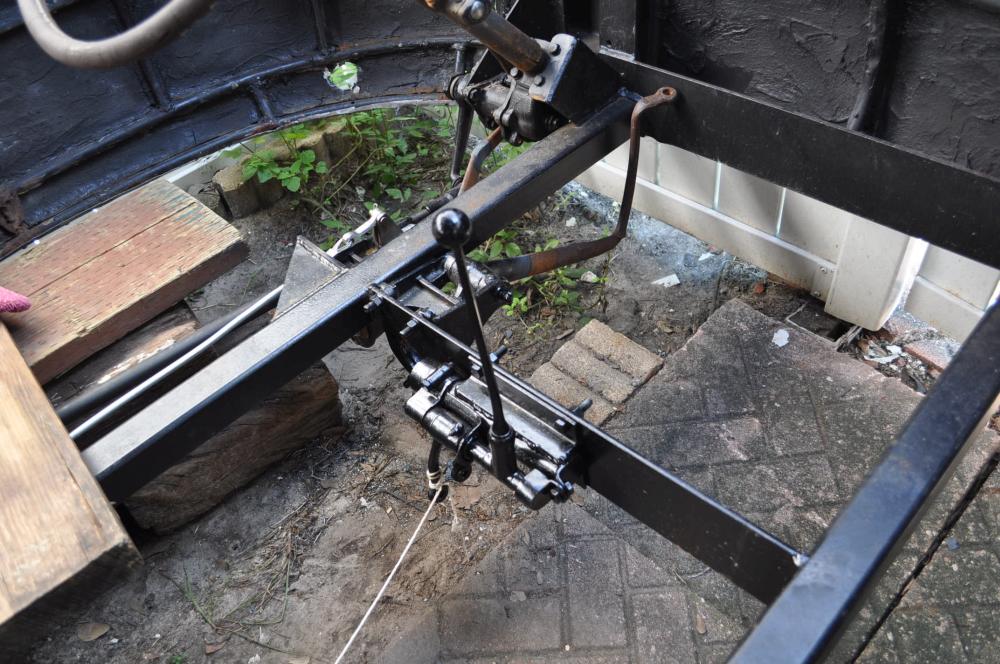 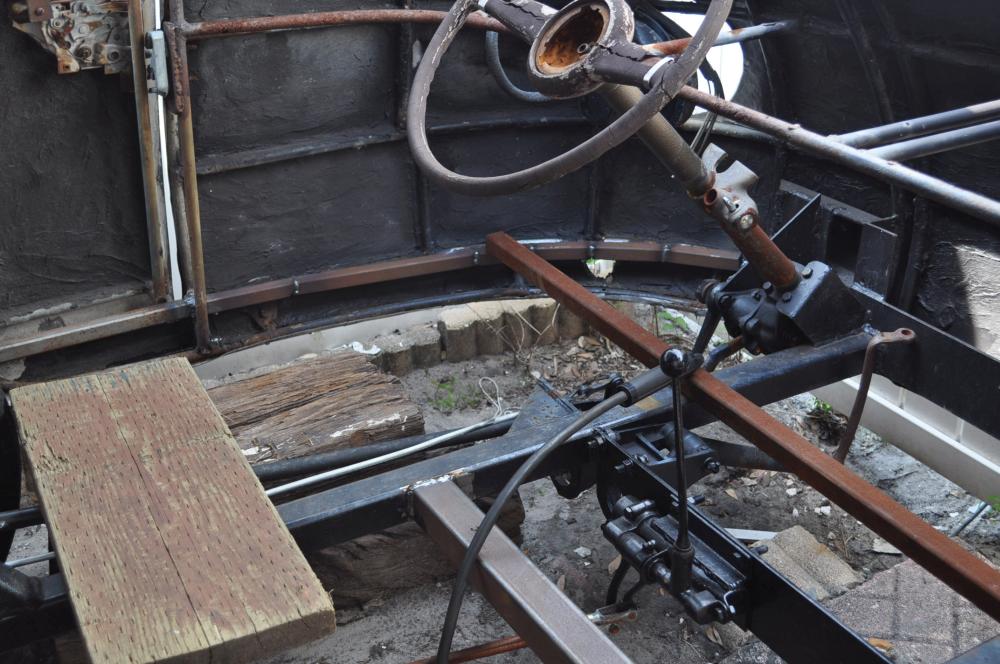 Great thanks goes to Mike Wittman for sharing this “how-to” article – something he has used as a reference on how to convert a column shifter to a floor shifter since the magazine article came out in 1960. 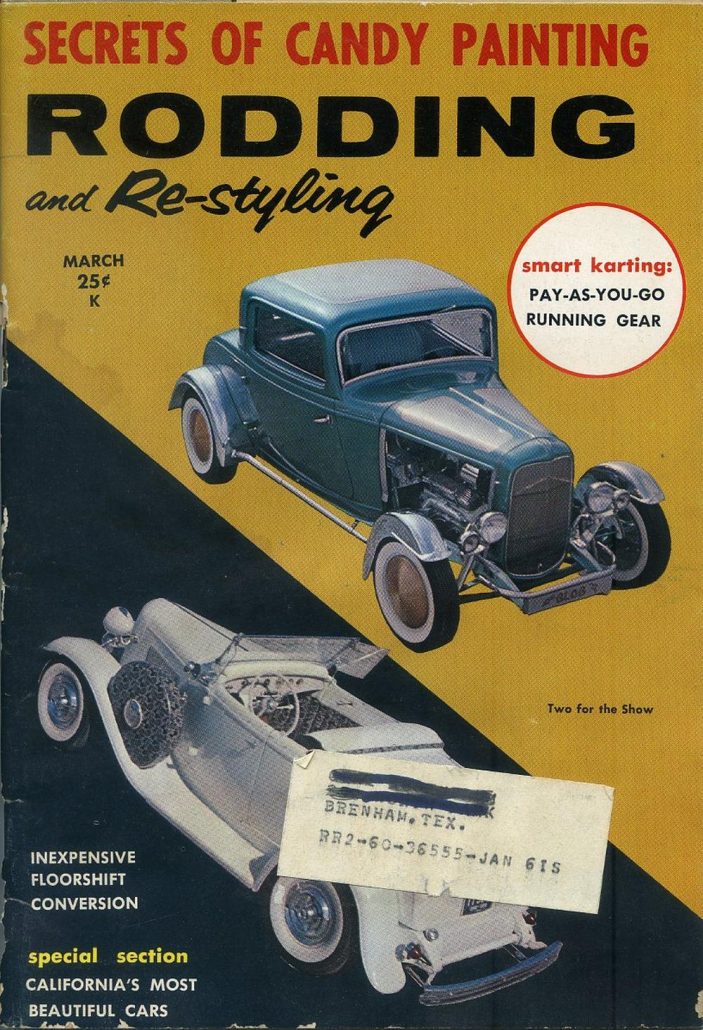 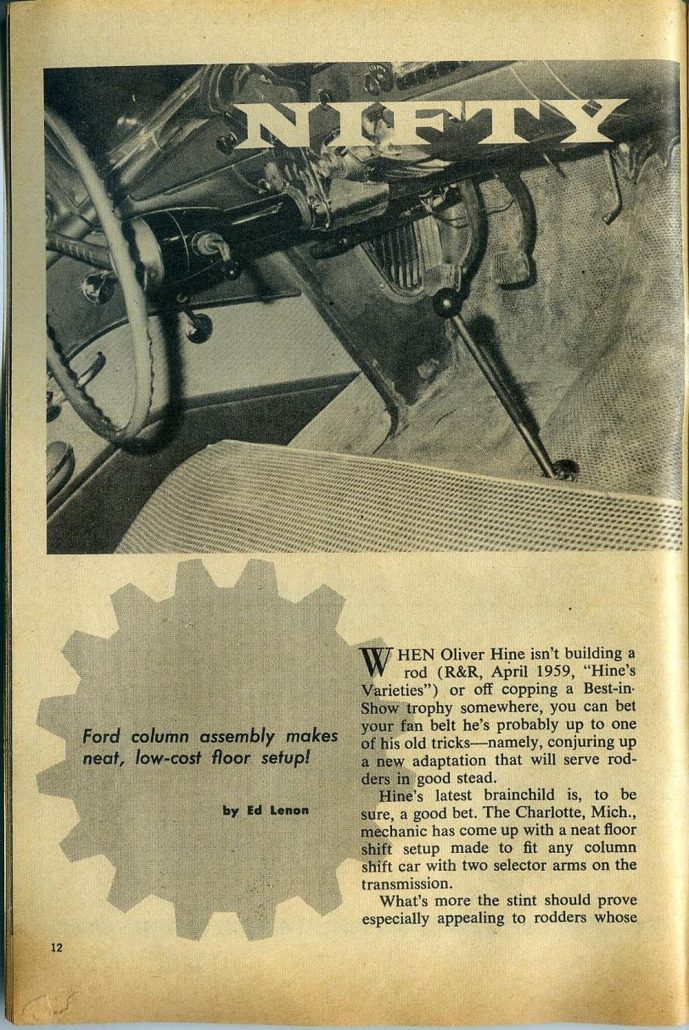 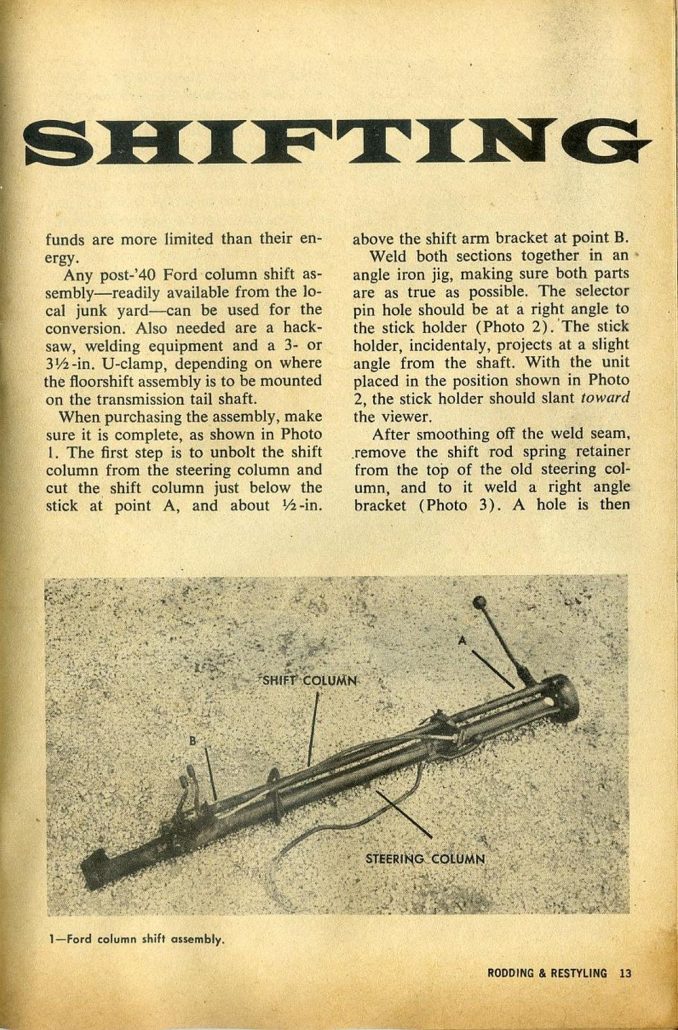 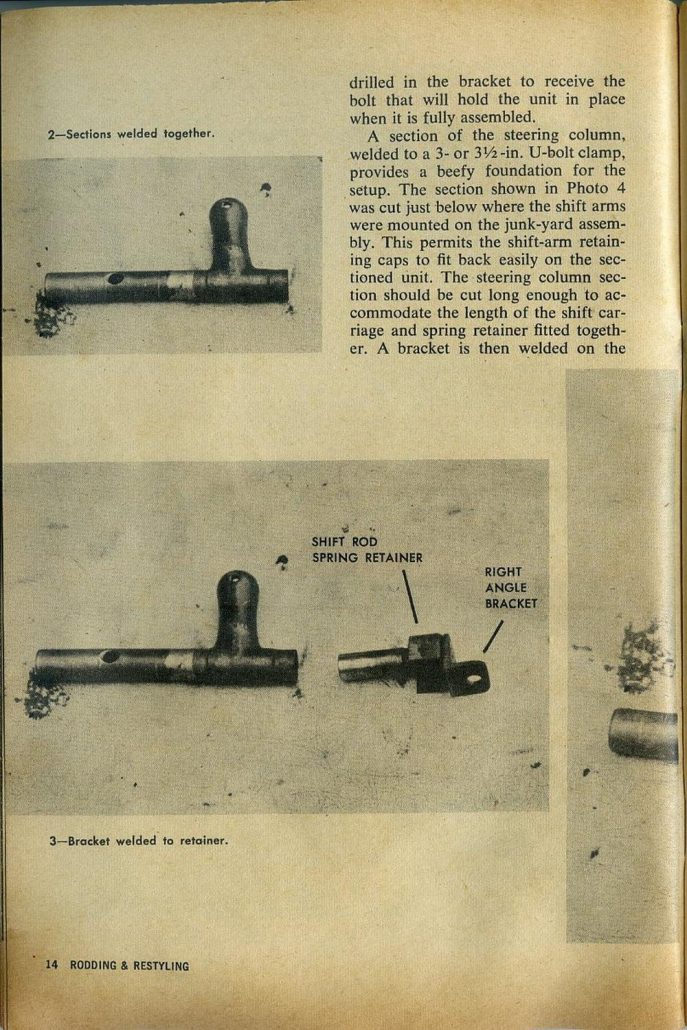 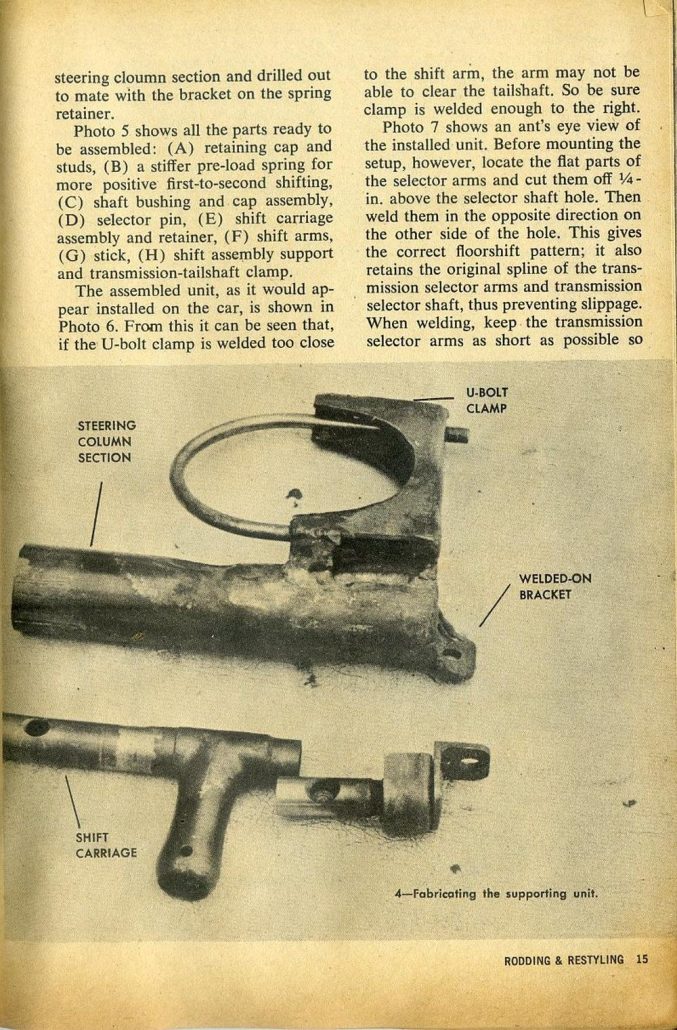 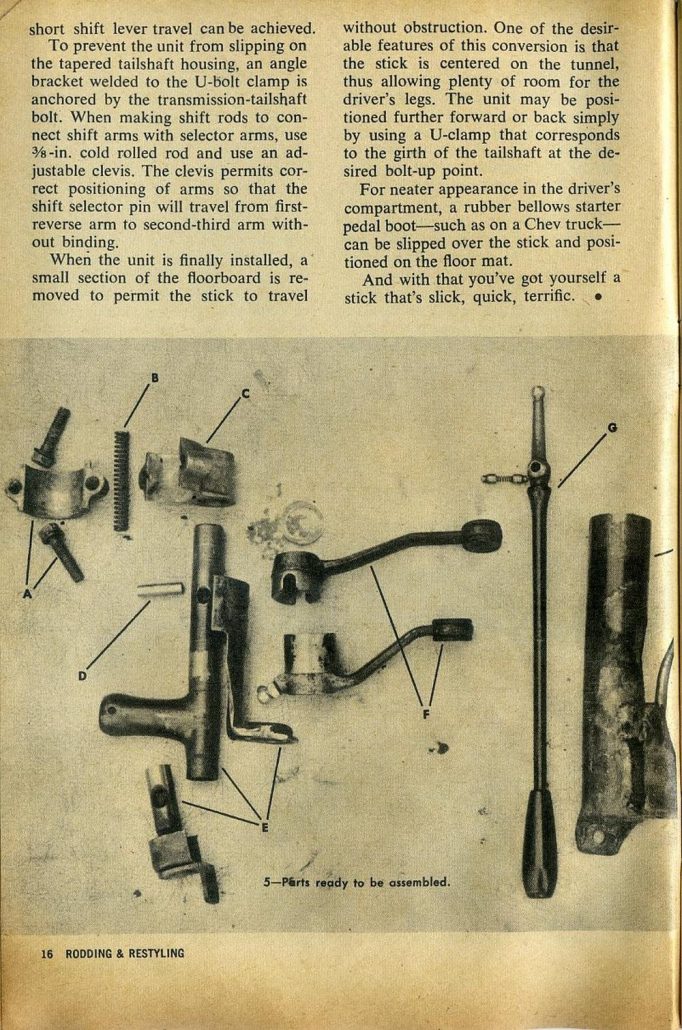 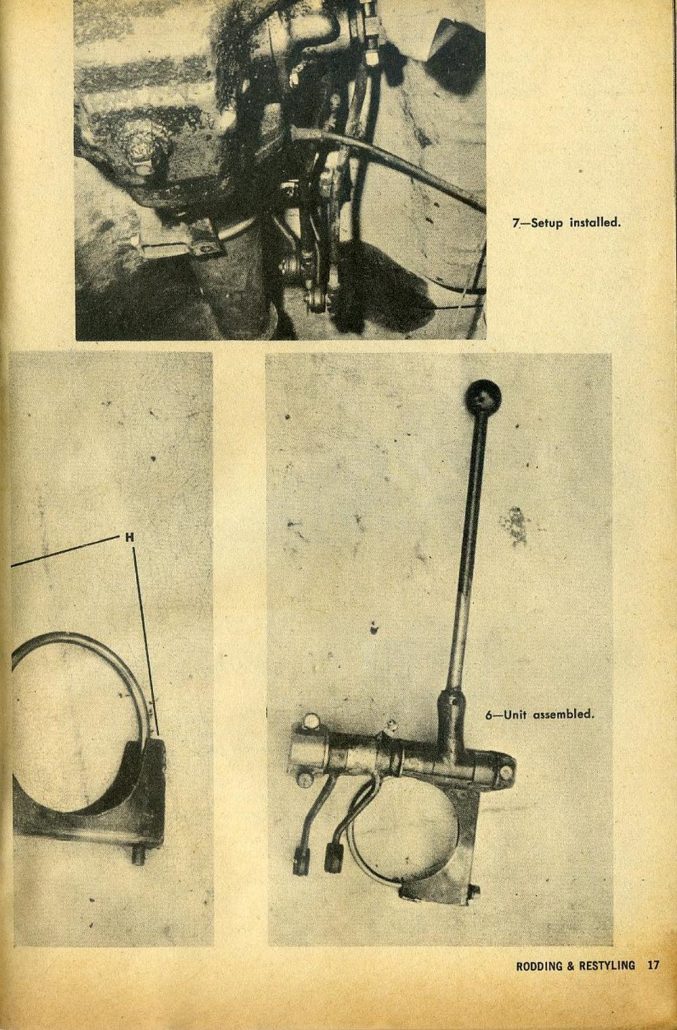