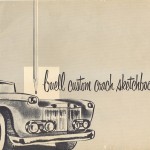 Finally….After Years of Looking…The Buell Custom Coach Sketchbook Is Found (I’m probably the only guy excited about this on planet Earth…)

Where did ideas come from when designing sports cars and custom cars back in the 1950’s?  Car shows, magazine articles, even TV shows in some cases I’m sure (California TV stations like KTLA featured both the Petersen Motorama and the GM Motorama each year when the shows were held.)  But there were other sources too.

One of the research projects I began several years ago was to uncover the full story and books/booklets from “Dan Post Publications” in Arcadia, California in the 1940’s and 1950’s.  This ultimately took over 3 years and resulted in a story by Harold Pace in “The Rodders Journal” #45, published in 2009.  If you want to see the ideas put forth on how to build a custom car and in some cases a sports car or “American Boulevard Cruiser”, these publications really show where the rubber met the road in terms of making beautiful – and not so beautiful – designs come to life.  The article and the books discussed within the article in “The Rodders Journal” are a must read for anyone interested in such history.

But what other sources of information existed for the budding and enthusiastic young designers wanting to create something and bring their idea to life? Enter the car design books from the 1950’s. 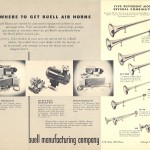 Who can’t love the wild and outlandish 1950’s designs?  And these designs showed up time and time again not just in California but rolling off the assembling lines throughout Michigan.  And that’s not even including the one-off designs across America that were being produced, like the Bosley Mark II by Richard Bosley in Ohio.  What a time it must have been to see car ideas come to life.

So…during my research concerning the Dan Post story, I expanded my swath a little bit and started to look for other design books in the 1950’s – books that showed people not just finished cars beautifully (and sometimes shockingly) made, but books that showed how to design a car from scratch.  That is, a source of inspiration on how to create something in pen or pencil and bring it to life.  That’s what I was looking for, and I found some real gems to share. 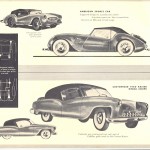 At Top of Page is Their Design for an “American Sports Car”. Notice the Side Panel Which Shows The Exact Location Where to Install Buell Air Horns

One of the first items I found was from the 1940’s and was a Richard Arbib / Harley Earl project.  It was actually not a book, but a correspondence course on how to design a car, and was from the “Detroit Institute of Automobile Styling”.  In reality, it was a test platform to find young men and women who were talented designers and could be offered an entry level car designer job by the folks at GM.  Elia “Russ” Russinoff was kind enough to allow me to scan the original booklet, and my good friend Gary Smith of Dean’s Garage posted a story about it.  Click here to read more of the detail concerning this program.

So…first postwar source found – where do you go next?  Why the same place anyone would have back in the 1950’s…..off to the magazine rack.

When you start searching the backs of 1950’s magazines for books and advice on how to design and build cars, you’re immediately struck by several things.  First, there are some books that appear over the years – but not many.  Car design was for the talented and energetic.  Not an easy concept to sell to most of the readers of these magazines (even though I’m sure most appreciated it).

Second, the focus was more on the aesthetic design of cars – not actually how to build a sports car from scratch.  There were some “how to” books on building a fiberglass body produced by Victress, Glasspar, Eric Irwin of Lancer, John Wills (Skorpion) and others, but strangely….these were rarely offered as stand alone products in the backs of magazines.  Often they appeared within the ads for selling the fiberglass bodies themselves.

And one other issue of note – time and time again I found ads for plans on how to build a custom sports car – from a finished set of plans.  I sure would like to find some sets of these plans today….what fun that would be 🙂 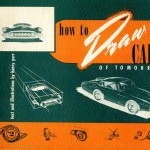 One of my Favorite Design Books From This Era is Bob Gurr’s 1952 Book on “How To Draw Cars of Tomorrow”.

The complete library of design books from the 1950’s appears to be about 6-10 books – items that could be purchased within magazines (not textbooks that would have been available to students).  A very short list indeed.  Besides the “Detroit Institute of Automobile Styling”, there are three books published by Dan Post that were either authored or assisted by Henry “Bob” Gurr.   Bob is best known as one of the original Disney Imagineers, and also worked with Glasspar and Mameco to design and build the first Autopia cars for Disney.  Click here to read more about Bob Gurr and his Disney background.

In pursuit of these books, I was fortunate to track down Bob at his home near Los Angeles, and Bob has been gracious in spending time helping me understand the context of the designs at the time, and the process – and contributions – concerning how each of these books were created.  These books include “The ABC’s of Custom How (1954)”, “How to Draw Cars of Tomorrow (1952)”, and “Automobile Design: The Complete Styling Book (1955)”.  These are the best books on car design of the 1950’s – and not easily found.   For those of you out there who made it this far in the story, let me know if you would like to learn more about these books, and I’ll expand on them in a future story (if there is interest).

There were only two other books out there on “design” that I could find from the 1950’s.  One was from Bill Jenks called “You Can Draw Cars”.  The first edition was published in 1952, and you can find this book – and more easily the republished later 1950’s edition quite easily.  The last book was not so easy to find…and that’s the source of the story today (Buell). 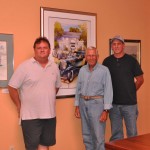 Most Recently, Erich Schultz and I Met Bob Gurr to Discuss His Memories of these Books at the Nethercutt Museum in June 2010

Off to England – By Way of eBay of Course:

But…the final book on my quest to find the holy grail of design books was a small booklet titled the “Buell Custom Coach Sketchbook”.  I looked for over 3 years and never found a single copy – until recently.  And I found this copy, in of all places….the United Kingdom.  Buell is an American company producing product in Illinois publishing in American magazines, so I was surprised a copy of it final showed up there (thank god for Ebay…).

So….why was I so interested in this book?  It wasn’t important in terms having an impact on American car design, and certainly by the looks of the cover of the booklet…..the designs seemed a bit off from the center of the design movement at the time.  But….if you have been reading my stories, by now you know that I focus on the hard topics to research – things obscure and often not written about in detail before.  Concerning fiberglass cars, the subtitle of my research has always been something like…..”I Specialize in Finding Cars No One Is Looking For…”  The same is true for obscure publications.

So….it is with great fanfare and excitement that I present to you today the complete 8 page booklet titled “The Buell Custom Coach Sketchbook”.  Ads for selling this booklet date to 1952 – and perhaps earlier….I’m still researching so time will tell.  The booklet is an interesting look into one company’s vision of design, and was used to promote and sell their primary product – Buell Air Horns.  In fact, the opening paragraph of the booklet says it best…. 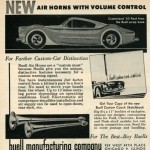 “The Purpose Of This Booklet:  As you will notice in looking at the designs on the following pages, our motive in presenting the “Buell Custom Coach Sketchbook” is not altogether altruistic.  Frankly, the designs are intended to show how Buell Air Horns fit into the custom car picture.”

You have to admire their clarity and honesty in publication when compared to much of what we see today.  They even have a section in the booklet on “How To Use Your Horn”.  You gotta love the way they wrote back then….

Buell is still in existence in Chicago Illinois producing their air horns for a variety of different applications.  Click here to see their current website.  I hope to contact them in the near future to see if I can learn a bit more about their foray into the automotive design world so long ago.

So….who will be the first to track down some Buell Air Horns and add them to their car’s restoration???  After all…it’s all about the accessories gang – right?   Time will tell and happy hunting….

Finally….After Years of Looking…The Buell Custom Coach Sketchbook Is Found (I’m probably the only guy excited about this on planet Earth…) 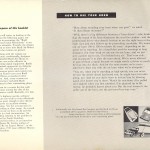 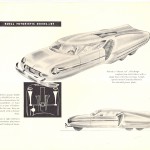 At Top of Page is Their Design for an “American Sports Car”. Notice the Side Panel Which Shows The Exact Location Where to Install Buell Airhorns 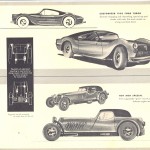 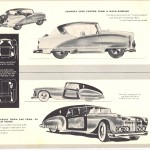 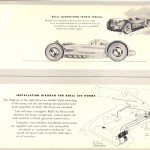 One of my Favorite Design Books From This Era is Bob Gurr’s 1952 Book on “How To Draw Cars of Tomorrow”.

Most Recently, Erich Schultz and I Met Bob Gurr to Discuss His Memories of these Books at the Nethercutt Museum in June 2010 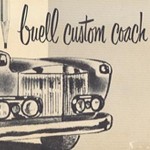