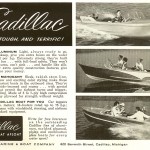 The Company That Produced The Sea Lark Was Not New To Boats – As Seen In The Brochure Above. They Were Already Building Boats Out Of Aluminum As Well As Mahogany.

These are some of the intriguing phrases we’ve heard over the years that send our minds wandering in various directions – in search of the “truth” or “others” out there who may be just like us.  Or maybe just “think” like us.

Well cinch up your saddle and “git” on your horse gang…. I’m pleased to say we ARE NOT alone and “truth” be told, the other half of our fiberglass brethren is hanging out at a website called “Fiberglassics” started by Kelly Wood in 1998 and most recently piloted by Jamil Mehdi of the Pacific Northwest.

Some of you astute fiberglass fanatics out there might have seen the brief mention I made of the Fiberglassics website in last week’s story on the Chicago-Built Custom Fiberglass Sportster Built by Frank Fisher Enterprises.   When you visit the home page of the Fiberglassics website and view their welcome message, you really get a feel for their passion (click here to visit FiberGlassics).  Here’s their “Welcome Message”:

“In July 1998 this site (FiberGlassics) began an attempt to recognize the style and creativity of the original fiberglass boat designs from the 50’s & 60’s, plus capture the spirit of a time that has since past. This site honors the pioneering minds that conceived and created these beautiful, never to be made again, classic fiberglass boats.   Within this site, you will find information on classic fiberglass boats. There are many sections. All libraries, pictures and information are FREE. Enjoy your time here.” 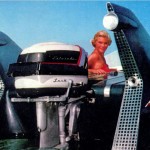 What Great Tailfins These Are – And Designed and Debuted In 1956 – Several Years Before The Fins On The 1959 Cadillac.

Recently, I had an opportunity to talk with Jamil about his FiberGlassic website and learn a bit more about the enthusiasts and fans of fiberglass that congregate there.  As a result of this conversation, Jamil and I decided to do a bit of cross-linking for both of our sites.

Last week, he was kind enough to kick this off with a story about our “Forgotten Fiberglass” website and an overview of fiberglass cars for enthusiasts on his website.  Click here to review Jamil’s Story on Forgotten Fiberglass:  The Glasspar G2.

This week, I’ll do the same for him with our gang, and to this end we’ll discuss a fiberglass boating favorite of mine – the Cadillac Sea Lark.

I first came across this boat while doing research into the 1950’s car shows in New York City.  In my search, I came across a video from the 1956 New York City Boat Show, and just seconds into the video, the Evinrude Sea Lark appeared.  Checkout the video below.  It’s just one minute long, and you’ll see the Sea Lark early on:

Jamil has given me permission to reprint his story on our website.  He’s also asked that I make some corrections in the story per the comments in his forums on the FiberGlassic website.  So it’s with great honor and excitement that I present to you our first “Fiberglassic Story” by Jamil Mehdi. 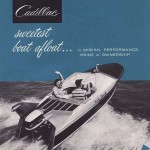 “The first image that comes to mind when most people hear the word Cadillac, is usually a big squishy luxury automobile with power everything and, in terms of classic cars, big tail fins.  In 1956, there was another kind of Cadillac.

The story of the Cadillac Sea Lark begins more than 60 years earlier. In 1893, the Wagemaker Company opened for business in Grand Rapids, Michigan, building roll top desks, filing cabinets, and other office furniture.  Over the decades that followed, the Wagemaker Company watched as the automotive industry grew into the dominant Michigan economy. The Detroit automakers were building plants all over the state and the money was flowing like champagne on New Year’s Eve. Ray Wagemaker wanted to get in on it.

Because automobiles were unlikely to ever be built out of wood, the Wagemaker Company pursued other avenues for diversifying their business. The logical middle ground between wooden office furniture and the booming automotive industry, was boats. Wood boats.  In 1953, Wagemaker started the Cadillac Marine and Boat Company in Cadillac, Michigan. They also bought U.S. Molded Shapes in Grand Rapids, a company that made cold molded boat hulls.

Using their two new subsidiaries, Wagemaker took the cold molded hulls from Grand Rapids and finished them up at the plant in Cadillac. The boats were then sold to the public as the Wagemaker Wolverine.  Business was great. In two years, they were producing 5,500 boats per year in a state of the art, 100,000 square foot facility.

By 1955, the boating industry was rapidly changing. Wooden boat companies were dying and the new fiberglass revolution was beginning to take hold. The Wagemaker Company knew they would have to change with times in order to survive. That’s when they started Empire Boats.  Empire Boats was a hybrid of the fiberglass revolution, half in step with cutting edge technology and half in step with traditional boat building, they manufactured boats that were a mixture of aluminum, wood, and fiberglass. Apparently, their business motto was, “We’ll try anything”. It was a hectic time for boat builders in those years. 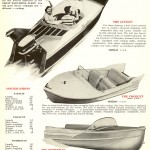 Here’s A Brochure Showing The Same Boat But A Few Years Later. It Was Now Renamed “The Javelin” With a Price Tag Of $1975 to Boot.

But boat builders weren’t the only ones going through growing pains. The ability of fiberglass to incorporate the sweeping curves and big tail fins that were all the rage in the auto industry also had an effect on the design of outboard motors.  The new generation of outboards were no longer dainty or conservative looking. They were flashy, dressed up in chrome, and had aerodynamic cowls that looked fast.

So how does all this get us back to the Cadillac Sea Lark?

It starts with a man named Brooks Stevens who was at the forefront of the post war design revolution. As an industrial artist, he was the man responsible for Harley Davidson’s redesign, the Studebaker Grand Turismo Hawk, and the engine design for Briggs and Stratton. (Less impressively, he would also be responsible for the Oscar Meyer Weiner Mobile).

In 1957, Evinrude hired Stevens to design a boat specifically to complement their new Lark outboard motors. What Stevens came up with was possibly the weirdest and wildest boat anyone had ever seen up to that day. The Sea Lark.  With tail fins that stood half a mile high, only two seats, and a double bubble windscreen, the Sea Lark was sure to raise a few eyebrows.

The Cadillac Marine and Boat Company was commissioned to build the wood, fiberglass, and aluminum curiosity for the world famous Chicago and New York International Boat Shows.  In the same vein that car makers build concept cars today for the big auto shows, the Sea Lark was a concept boat. Cadillac Boats built one for each show, then never built another one again. 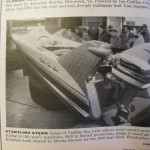 A Boating Magazine From 1956 Shows The Following Caption, “Startling Stern design of Cadillac Sea Lark Reflects Trend Toward Extreme Auto Styling In This Year’s Runabouts. Still In Limited Production, Design Is Based On Original Evinrude Lark Created By Brooks Stevens For The 1956 Boat Now. Retail Price: $1975.

More than fifty years later, not much is known about the history of these two rare gems. One was discovered and now lives in the home of private collector.  The other?   No one knows. People have been searching for years.  Maybe it will turn up on Craigslist for $300 in Omaha. Maybe it’s buried under decades of mulch and blackberry brambles behind someone’s farm in Tuscaloosa. Maybe it met its maker at a landfill in Portland. Maybe its already been discovered and someone is keeping quiet about it.

If you happen to find it, just remember, I will happily give you $300 for it.

Thanks again to Jamil for his generosity in providing today’s Forgotten Fiberglass story.  I encourage each of you to visit his site, explore it, and have some fun.  There are some great looking fiberglass boats out there gang – and they might look just perfect behind your vintage fiberglass sports car too.  Now that’s one fantastic fiberglass duo I would love to see! 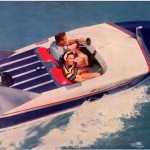 What Great Tailfins These Are – And Designed and Debuted In 1956 – Several Years Before The Fins On The 1959 Cadillac.

Here’s A Brochure Showing The Same Boat But A Few Years Later. It Was Now Renamed “The Javelin” With a Price Tag Of $1975 to Boot.

The Company That Produced The Sea Lark Was Not New To Boats – As Seen In The Brochure Above. They Were Already Building Boats Out Of Aluminum As Well As Mahogany. 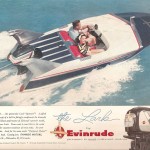 A Boating Magazine From 1956 Shows The Following Caption, “Startling Stern design of Cadillac Sea Lark Reflects Trend Toward Extreme Auto Styling In This Year’s Runabouts. Still In Limited Production, Design Is Based On Original Evinrude Lark Created By Brooks Stevens For The 1956 Boat Now. Retail Price: $1975. 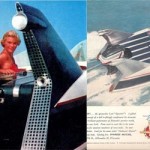