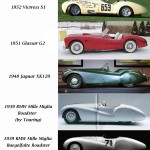 Here’s A Side By Side Comparison of All Cars In Our Story. You Can See The Strikingly Similar Lines of The Victress S1 When Compared to the 1939 BMW Buegelfalte Roadster.

This is the third installment of a 3 part series of articles on “Designs That Influenced The Styling Of The Victress S1 And Glasspar G2.”  Here are links to the other parts of the story:

When my good friend Erich Schultz first read the original version of my story, he commented that I had posted pictures of a different version of the 328 Mille Miglia than the one he remembered.  Erich remembers a car that has additional features not in the other “Mille Miglia” versions of the 328 – and it was these features that the Victress S1 also incorporated.

So off, again, I was running to push the envelope a bit more and learn specifically about the car Erich was mentioning and how it related to the car in Robert Cumberford’s “Auto Legends” book.

I returned to the BMW BLOG website (click here to review this website) and sorted out some additional details of the car Erich was referencing.  Here are the key points I found about this specific car – the 1939 BMW 328 Mille Miglia Buegelfalte Roadster. 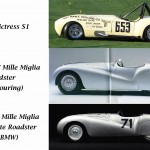 Here’s A More Focused Comparison. Both BMW Roadsters Are Shown Here With The Victress Side Profile At The Very Top. You Can See The Victress and The Buegelfalte Roadster Share The Same Long Tail Designed By Dr. Kamm. 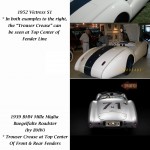 Here The Rear Styling Is Compared. Note That The “Trouser Crease” On The Rear Fenders Is Identical To That Of The BMW Buegelfalte Roadster. Erich Schultz Certainly Has A Keen Eye For Design!

Thoughts On Points Made On the BMW Blog About This Car:

This means the first car was produced in 1939 by BMW (not Touring), and the remaining Mille Miglia cars were produced afterward by Carrozzeria Touring (Coachbuilders).

Two more roadsters were created by Touring and a Coupe giving a total production (as cited on the website above) of 3 Mille Miglia Roadsters (that includes the first Buegelfalte Roadster) and two additional coupes.  Not very many cars gang – but very significant cars in terms of their styling and racing history.

Erich Schultz:  Thoughts on the BMW Design Impact on the Victress S1:

After comparing pictures of the 328 Mille Miglia made by BMW (the first car) with those produced afterward by Touring, Erich Schultz noted the following differences:

I also found a short picture based video you might enjoy that was done for a car auctioned in May 2010.  It’s about a minute long.  Have at it gang – I think you’ll enjoy it.

By the way gang, the BMW 328 Mille Miglia sold at auction for 5.6 million dollars.  So those of you who see design lines for your Victress S1 as coming from both the Jaguar XK120 and the BMW 328 Mille Miglia may want to become a bit more familiar with the heritage of the design of your car.  It will be to your advantage to talk to folks about the design of your Victress S1 and how it was inspired by these cars.  You can read more about this particular BMW on the following website:

Click here to read about the BMW 328 Mille Miglia

Guy Dirkin:  Thoughts on the BMW Design Impact on the Victress S1: 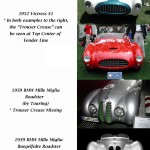 I sent our preliminary story to good friend Guy Dirkin who is restoring his “Lost Motor Trend Victress S1” built by Fred Bodley.  Guy had some interesting points to make.  Let me share them with you here:

“When Hugh Jorgenson was commissioned to design the Victress S1 it was true that he was asked to come up with an innovative design to “out Jag the Jag”.  Jorgenson was not operating in a vacuum, however, and undoubtedly was influenced by the BMW 328 Buegelfalte Roadster.  The design lines, proportion, and details are too similar; the evidence of a relationship between the two designs are just too close to be coincidental.

The BMW had significant science applied to the aerodynamics, understood at that time. The work of Dr. Kamm has been well documented as a pioneer in the application of aerodynamics to the automobile.  No wind tunnel testing was used in the development of the Victress S1, that was not the MO of Victress in the early 1950’s!

It is interesting that the Guy Maybee Special held the Bonneville speed record for sports cars in 1953 at just over 200 mph.  The basic shape chosen for the Victress was field tested at Bonneville: and it proved to be sound. The BMW design heritage applied to the Victress apparently carried forward a degree of aerodynamic effectiveness.

Jorgenson  provided Doc Boyce Smith with a pleasing design that was placed in production.  Meeting client expectations is always a good idea!  How Jorgenson arrived at the final Victress S1 design started by listening to Boyce Smith’s requirements and then applying his full knowledge base to the final product.  The requirement to “out Jag the Jag” was critical but the evidence suggests that he drew on a deep knowledge base which seemingly included the influence of the BMW 328 Buegelfalte Roadster.”

Excellent points Guy!  And I think your discussion on how the body of the Victress may have contributed to the achievement of “The World’s Fastest Sports Car” at Bonneville in 1953 is right on target.  Thanks very much for sharing your thoughts with us.

Thanks to both Robert Cumberford and Erich Schultz for the design insights of both of these significant automobiles on cars across the world.   Those of you who are Glasspar G2 and Victress S1 owners should enjoy this new aspect of design heritage of these cars, which will allow you and others who are interested in your cars to appreciate your vintage fiberglass sports cars in a much more significant way.

And…if you would enjoy learning more about some of the “Classics of Style and Design” across the world, I highly recommend Robert Cumberford’s book “Auto Legends” as a wonderful addition to your library.  Click here to consider purchase on Amazon.com

Note: 2/19/2011:   Robert Cumberford just wrote in and had the following information to share:

“Geoff,  Just saw your latest posting, talking about antecedents for Glasspar and Victress bodies, especially the Jaguar XK-120.  Not too many people know that the 1953 Corvette was a kind of Jaguar XK-120 copy. That is, the wheelbase was the same, the cast iron engine was the same 3.5 liter size and sat in exactly the same place in the chassis. The seating dimensions and package are identical, too: pedal placement, steering wheel location, etc. the big differences were in the styling — Harley Earl went for something less classical than the BMW/Jaguar, with rocket taillights, toothy wide grille and a chrome stripe down the side, but it still had the dip at the back of the door before the rear fender rose up. Not as much drop as the European cars, but still very much present.  And of course the Corvette was the world’s first production fiberglass car, and the only one to have been made in more than a million examples over the past 58 years.   Best, Robert”

Note: 2/19/2011: Matt Tritt, son of Bill Tritt from Glasspar, just wrote in and had the following information to share:

“That BMW is one of my favorite cars, Geoff.  Also, even though you might know this already, dad was a frequent lecturer at Art Center in the early 50’s, and his car designs were front and center in his lectures. Do you suppose that the Victress designer/Art Center student attended the lectures? I rather think he did.  Cheers,  Matt”
——————————————-