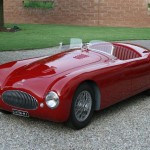 I bet all of you have been waiting for a story on Vale Wright’s 1952 sports car.  Well….I’ve been waiting too!  And do I have lots of new information to share.

The Vale is one of my favorite cars, and the story is exciting to review.  It’s actually based on a 1947 Cisitalia 202 SMM Nuvolari Spider (the SMM stands for Spider Mille Miglia).   This Cisitalia is not the same car that Bill Burke modeled his Allied Swallow 94″ wheelbase coupe on.  Rather, Burke took a direct “splash” or copy from Bob Petersen’s (Petersen Publishing) 1947 Cisitalia 202 coupe.  And voila…had a new fiberglass car to bring to market in 1952 – the Allied Swallow.

Vale Wright created a design as close as he could make to the beautifully executed 1947 Cisitalia Nuvolari Spyder.  And he did a darn good job too!  Especially when you think he had to translate a visual 2 dimensional shape to a 3 dimensional object.  It’s hard enough for me to draw a shape on a piece of paper.  Can you imagine the talent it took to translate a picture of a car to a full size replica?  Simply amazing – as were many of the guys and their fiberglass companies back in the 1950’s.

To appreciate Vale Wright’s car, let’s explore a bit more about the car it’s based on – The Cisitalia Nuvolari. 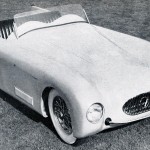 Here The Vale Roadster Is Seen in a Beautful Front 3/4 Shot.

In 1946, Giovanni Savonuzzi sketched a coupe body for Cisitalia’s competition car.  This design would be built by Stabilimenti Farina in Italy in late 1946 / early 1947. After building two coupes, a roadster (also called a Spider) was designed and built.  This car was given the designation “SMM” for Spider Mille Miglia.

At the 1947 Mille Miglia, the Cistitalia spider proved itself by leading most of the race, and it was driven by renowned Tazio Nuvolari. Despite competing against engines three times larger, Nuvolari held back the other cars until troubles ensued in the rain. In the end, Nuvolari’s Cistitalia took second overall and first in class. For this epic effort, subsequent competition spiders were known as 202 SMM Nuvolaris.

Since the 202 SMM received much attention at the Mille Miglia, Farina continued production of the design for several customers. In total around 20 cars were made very similar to Nuvolari’s winning car (the roadster or spider version).

So… Vale Wright chose an exceptional vehicle as the basis for his new car – a car that was designed and built by one of the best coachbuilders of the day and was driven by one of the most recognized race car drivers in the world.  Not a bad choice to make gang – and quite a beautiful car too.  For those of you seeking additional detail about this car and its history, you can visit Keith Martin’s Sports Car Market website.  Click here for additional information. 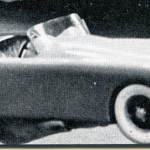 Here’s The Small-Scale Model Of The Roadster That Vale Built Before He Tackled The Full Size Mold and Body.

Using a mixture of dental plaster and enthusiasm to start, a Californian has set out to prove people who drive glass autos should look ahead.

While Detroit auto manufacturers toy with the idea of building sports cars of plastic, a young Californian has been beating their time.  His product is one which can compete with the best professional efforts.

Vale Wright, an architectural designer and city building inspector in Berkeley, has combined his talent for art with his interest in sports cars.  The net result is a sleek customized body designed to fit MGs.  The ingredients for the job are perhaps the most astonishing side of the project.

Stacked in one corner of his basement, they consist of a half dozen five-gallon cans and an equal number of bottles.  The dental plaster was used for the mold, 1000 pounds of it. 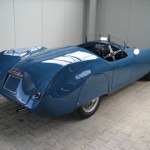 Poured over the basic materials were, initially, four months of work by Wright, his pretty wife, Marye, and some helpful neighbors.  But with a permanent mold fashioned, a complete body, including modifications to suit the individual, can be turned out almost daily.

First step, of course, was the search for a design.  After much doodling with pencil and paper, Wright hit upon a design for a streamlined body with elevated tail fins.  He bought chicken wire and wooden boxes, then retired to his basement.  Making a mock-up of wire was not difficult.  He daubed the dental plaster on the frame.

Long hours of sanding and polishing followed. Finally, the mock-up with its smooth, symmetrical fenders and body became a reality.  With the help of friends, Wright laid fiber glass cloth over the dummy, next fiber glass matting, and then poured 17 gallons of resin, a catalyst and hardener.  What came off was the mold Wright now uses to turn out more glass bodies by the same process.

As the dried, glassy smooth body comes from the mold, Wright cuts in doors, engine hood, and other openings, fits in a tubular frame arch, and drops the enveloping body over a waiting chassis and engine. 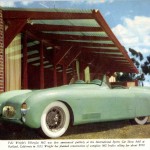 This Great Color Image Came From The Inside Back Cover Of The August 1953 Issue of Auto Sportsman Magazine.

For those who worry about the shattering possibilities of an auto accident in the car, Wright picks up a hammer and bangs on the streamlined fenders.  “See?” he asks, his 200 pounds behind each hammer blow.  “Won’t even dent.  If it did break open, you just paint on more liquid fiber glass, repaint it, and it’s as good as new.”

The MG-size body Wright builds weighs 120 pounds, as against approximately 800 pounds of a metal body.  Wright doesn’t pretend to have the only plastic or glass car in production, but he does claim he’s the only man in America to start production of a motor car with just a hammer and saw – and dental plaster.”

Our good fiberglass friend Marshall Foxworthy has tracked down the Vale Wright family, and we’re in the process of collecting some very interesting items concerning the history of this car and the company Vale built.  I’ll be featuring additional information about the Vale in future articles. 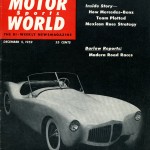 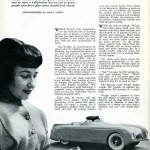 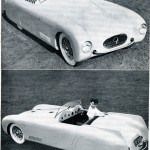 Here’s The Small-Scale Model Of The Roadster That Vale Built Before He Tackled The Full Size Mold and Body. 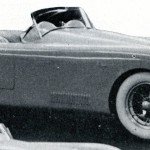 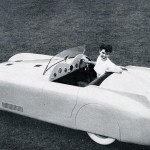 Here The Vale Roadster Is Seen in a Beautful Front 3/4 Shot. 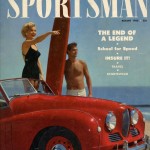 This Great Color Image Came From The Inside Back Cover Of The August 1953 Issue of Auto Sportsman Magazine. 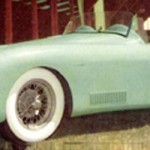