Participating in the Amelia Island Concours d’Elegance is always an honor, and none more than this year when we shared the responsibility in debuting an Undiscovered Classic, the 1952 Voodoo Gardner, with its new owners, Brian and Sue Ford of Christchurch, New Zealand.

Appearing on the lawn of Amelia earlier this month was a near 70 year journey for the Gardner family in seeing their car on display in public for the first time.  It was a 10+ year journey for myself and the Fords in seeing this restoration complete.  In today’s story let us share photos from Amelia and some of the stories behind the photos too.  And away we go….

The Voodoo was placed in the Sports and GT Cars Class: 1948 to 1953.  That was pretty impressive company which included Clark Gable’s Jaguar XK120, Porsche 356, 1951 Ferrari and other early postwar classic sports cars. 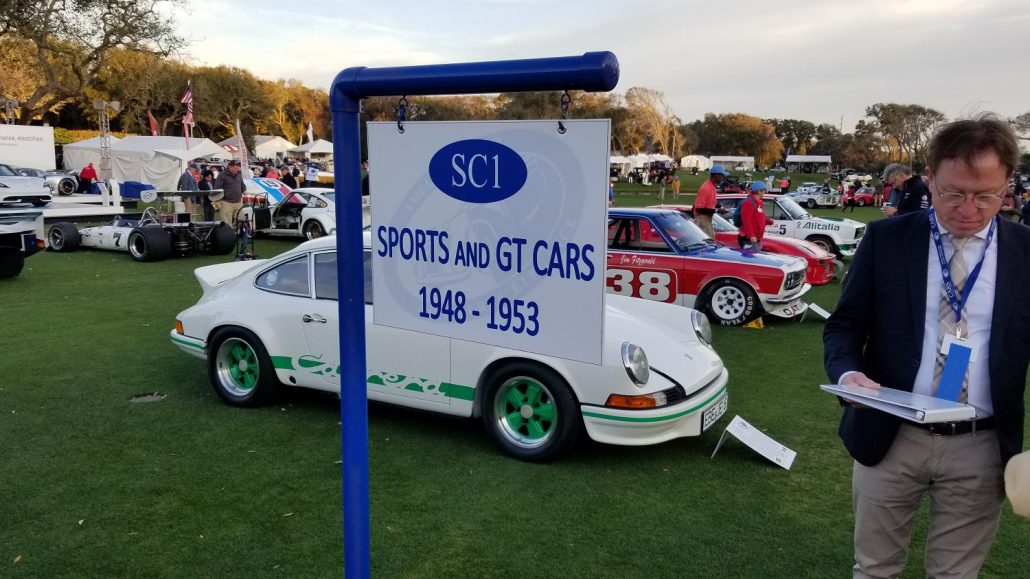 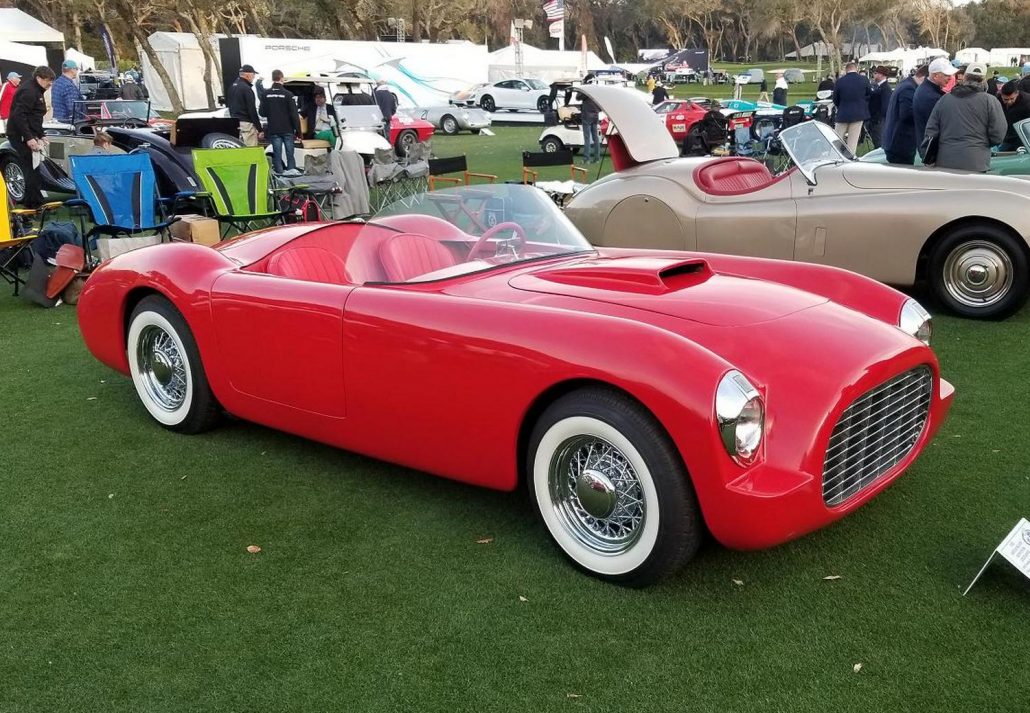 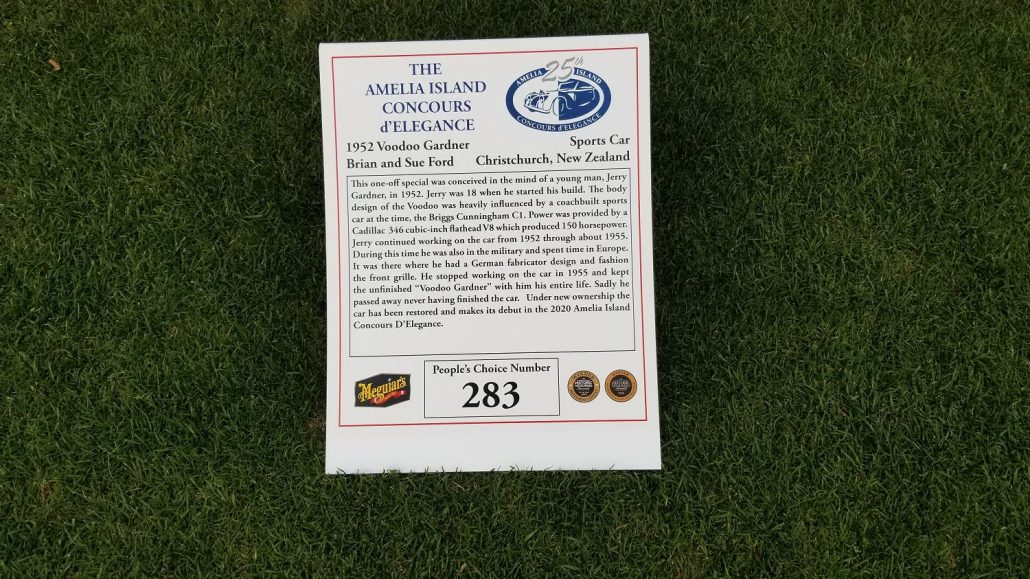 The presentation sign at the front of the car read:

“This one-off special was conceived in the mind of a young man, Jerry Gardner, in 1952.  Jerry was 18 when he started his build.  The body design of the Voodoo was heavily influenced by a coachbuilt sports car at the time, the Briggs Cunningham C1.  Power was provided by a Cadillac 346 cubic-inch flathead V8 which produced 150 horsepower.

Jerry continued working on the car from 1952 through about 1955.  During this time he was also in the military and spent time in Europe.  It was there where he had a German fabricator design and fashion the front grille. He stopped working on the car in 1955 and kept the unfinished “Voodoo Gardner” with him his entire life.

Sadly he passed away never having finished the car.  Under new ownership, the car has been restored and makes its debut in the 2020 Amelia Island Concours d’Elegance.” 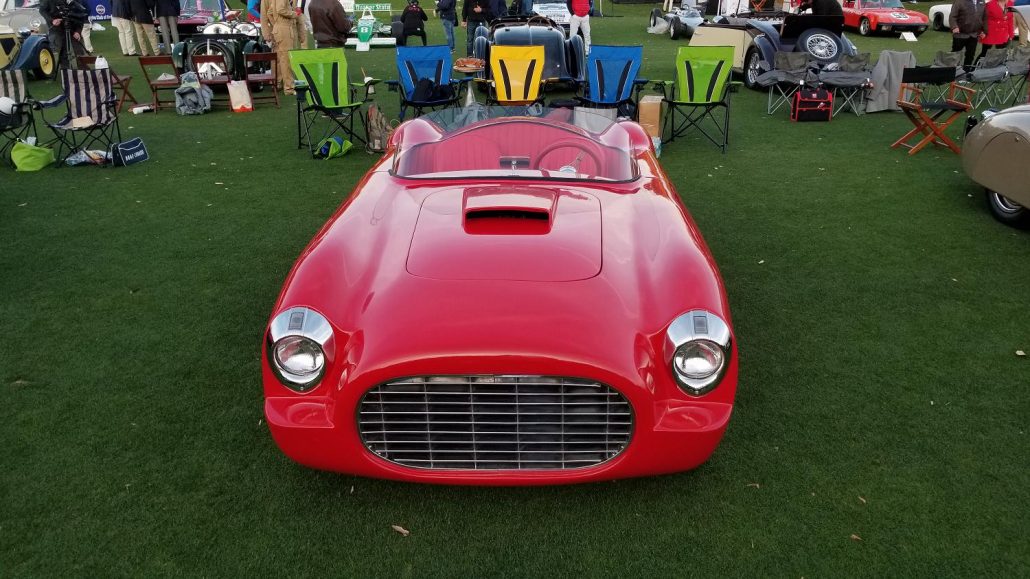 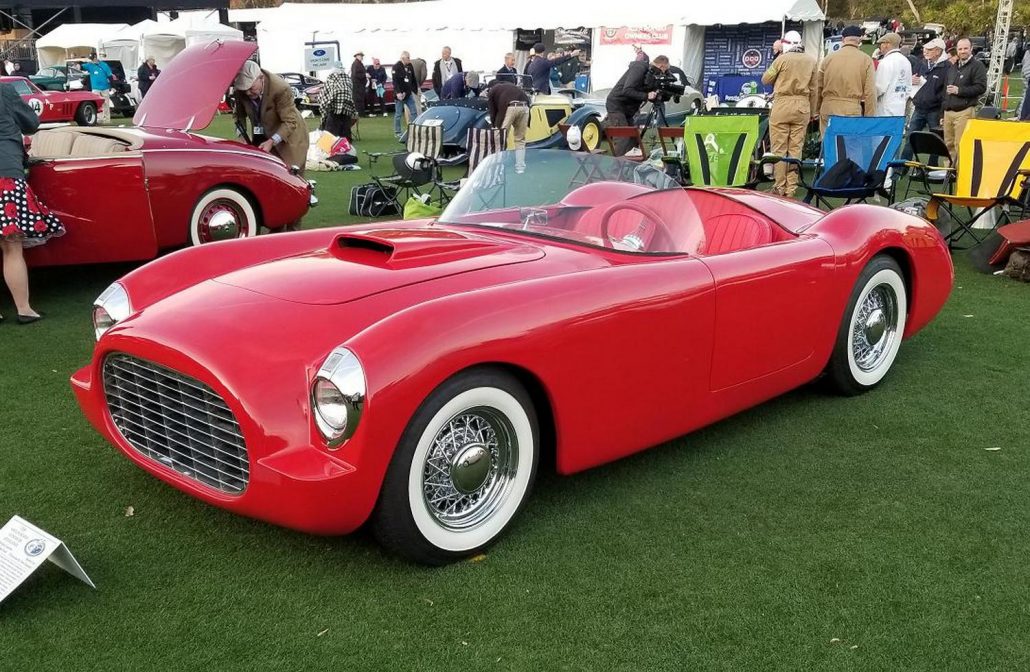 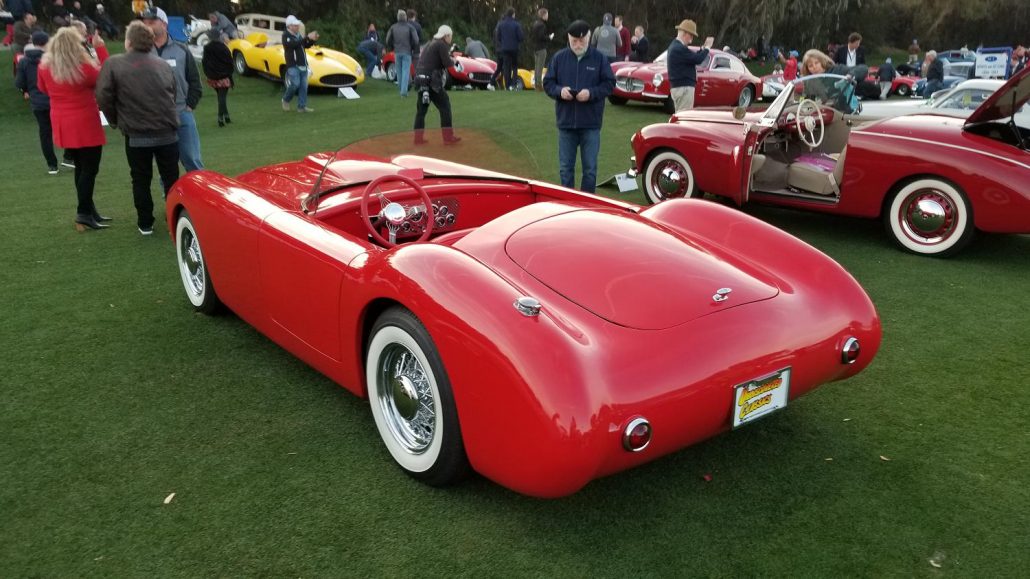 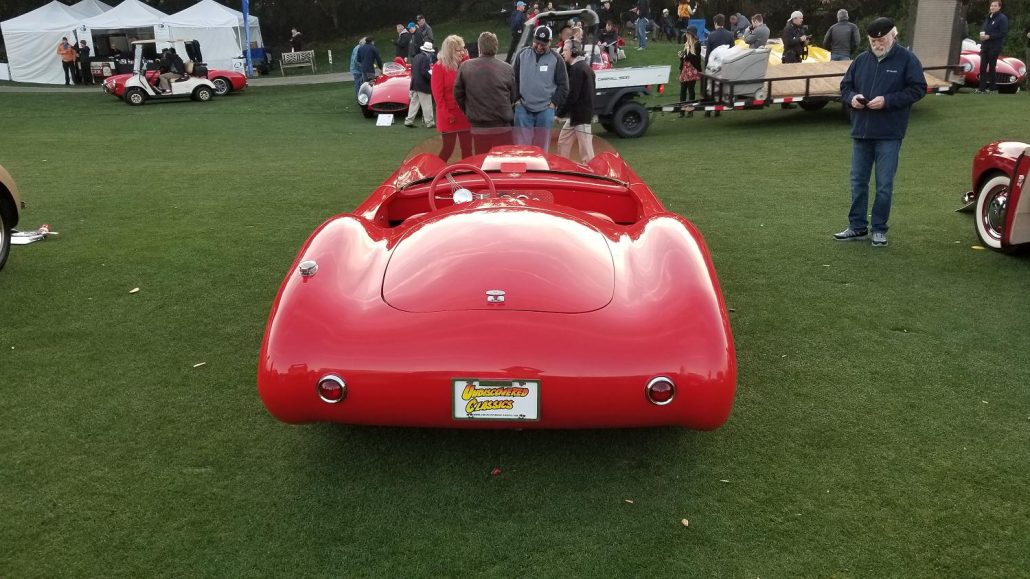 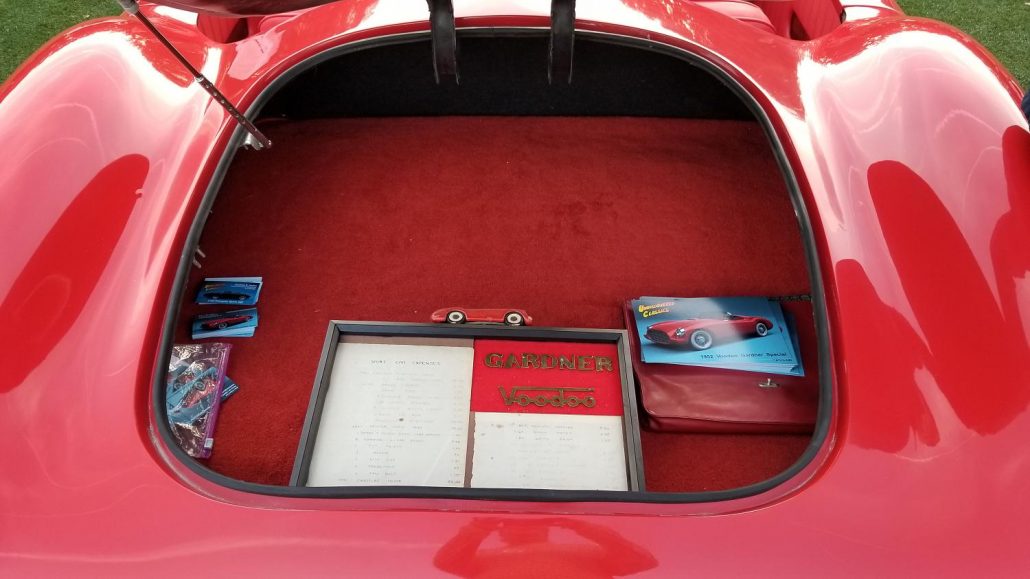 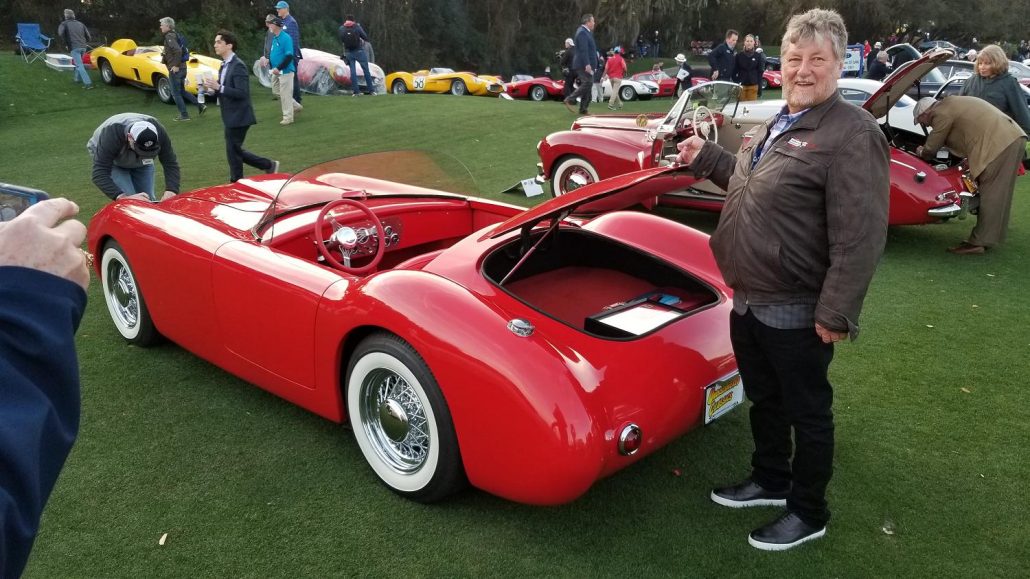 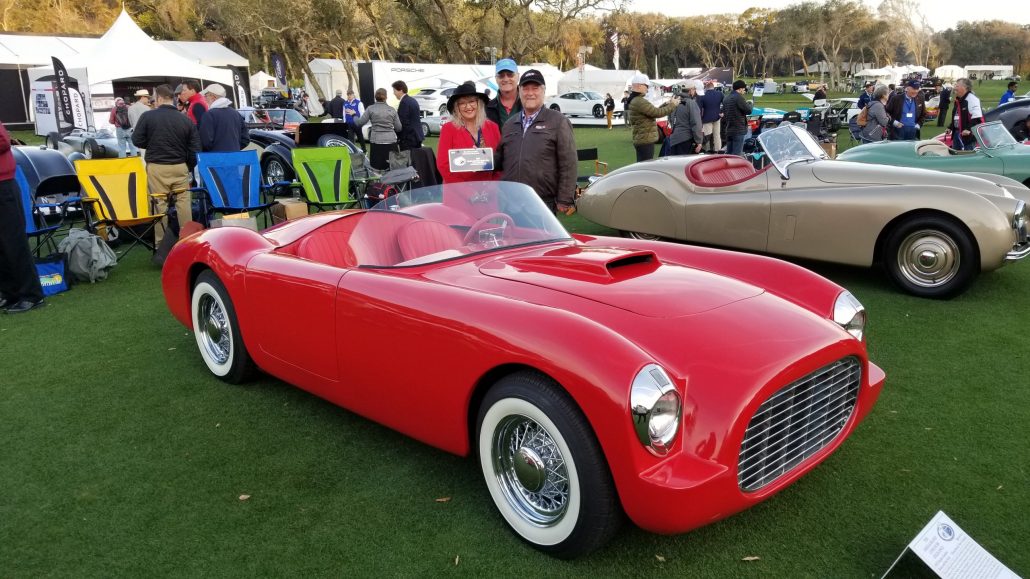 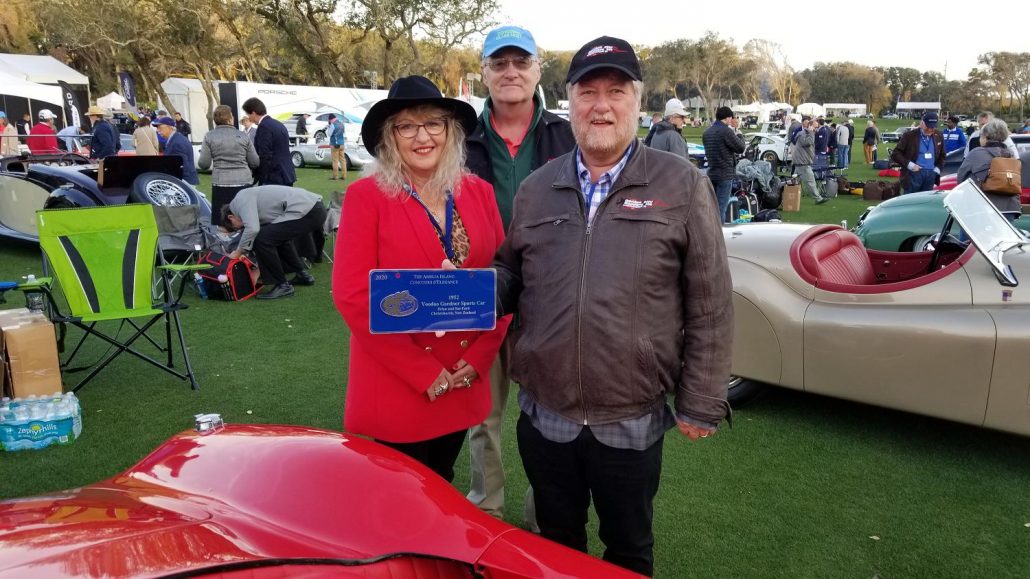 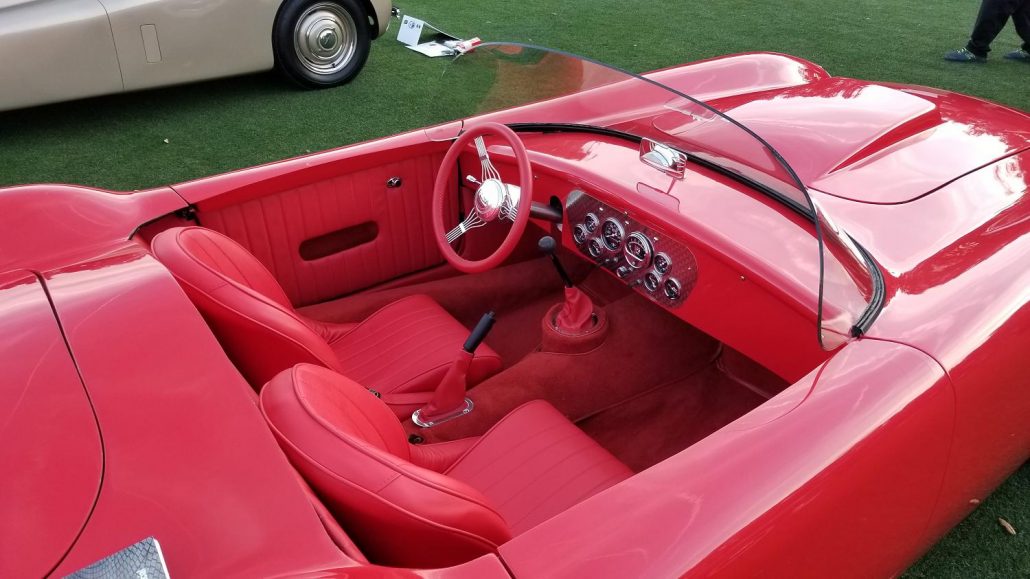 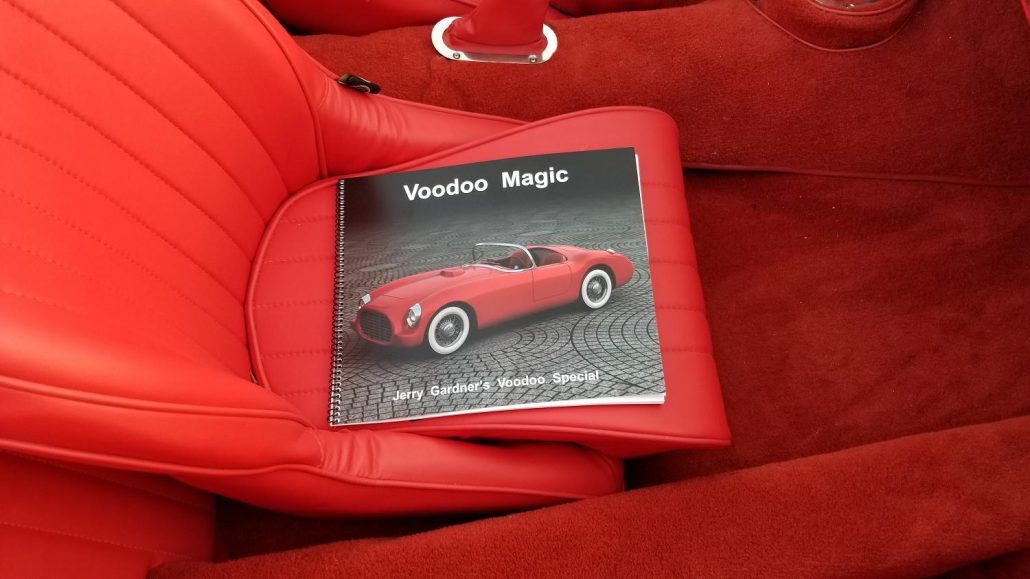 Our Most Recent Book, Published and Online, Was Available for People To View. Fun to Share! 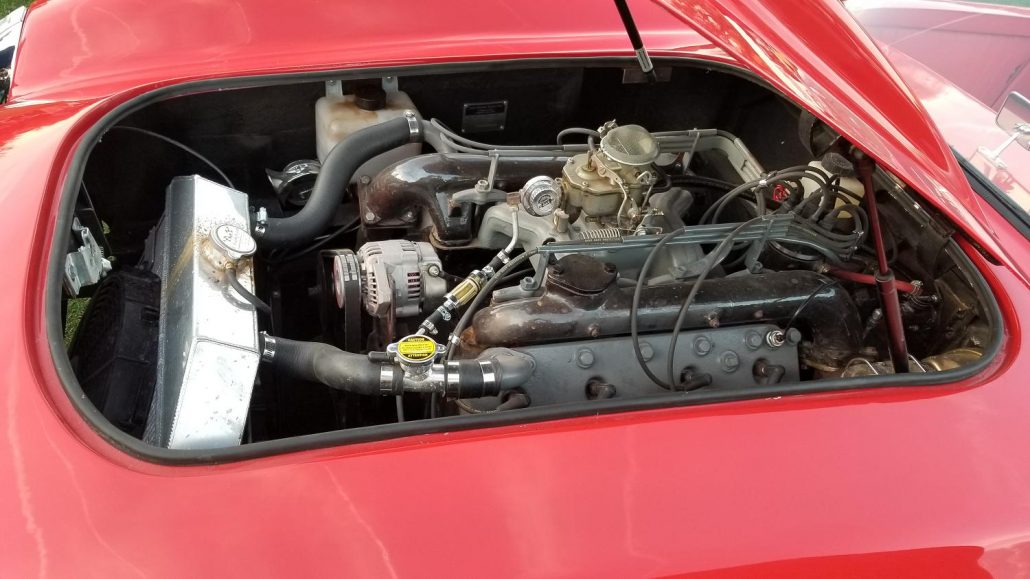 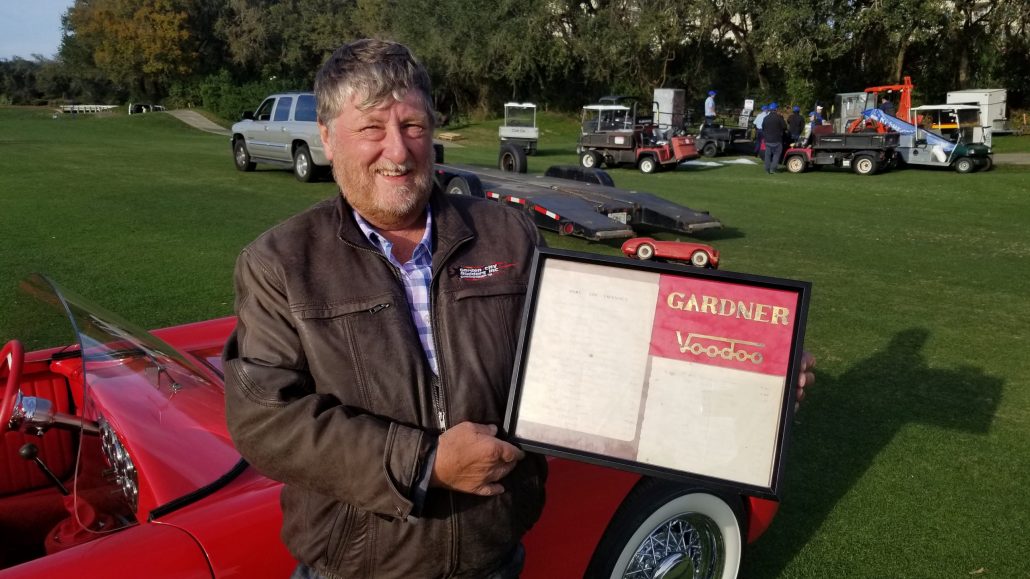 Brian Ford Showing a Gardner Family Treasure – The Voodoo Gardner “Script” hand cut from brass for the car along with original receipts documenting the car’s build. Did you see the small wooden model at the top of the shadowbox? Jerry Gardner made this first to guide his “build” of the car. 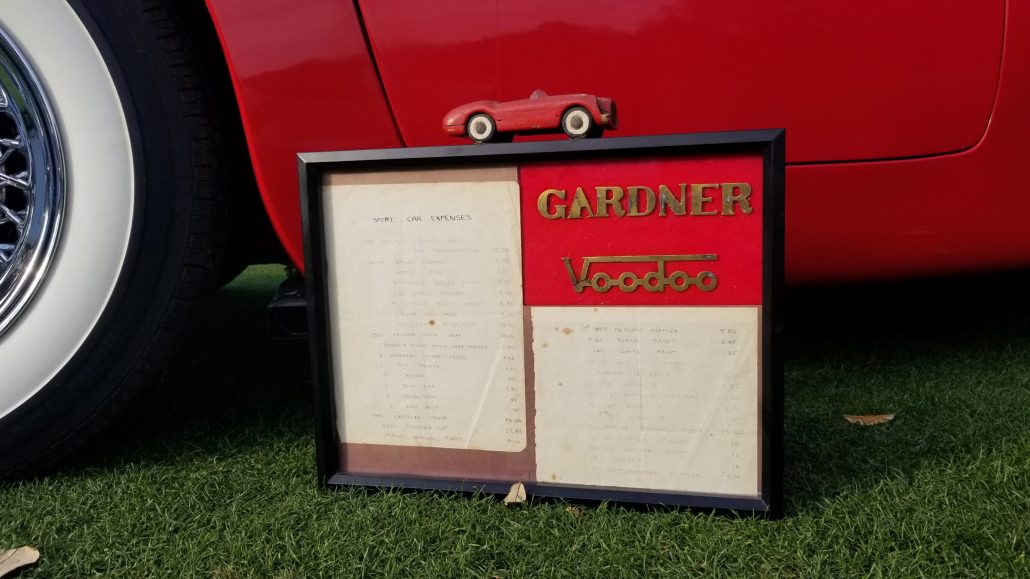 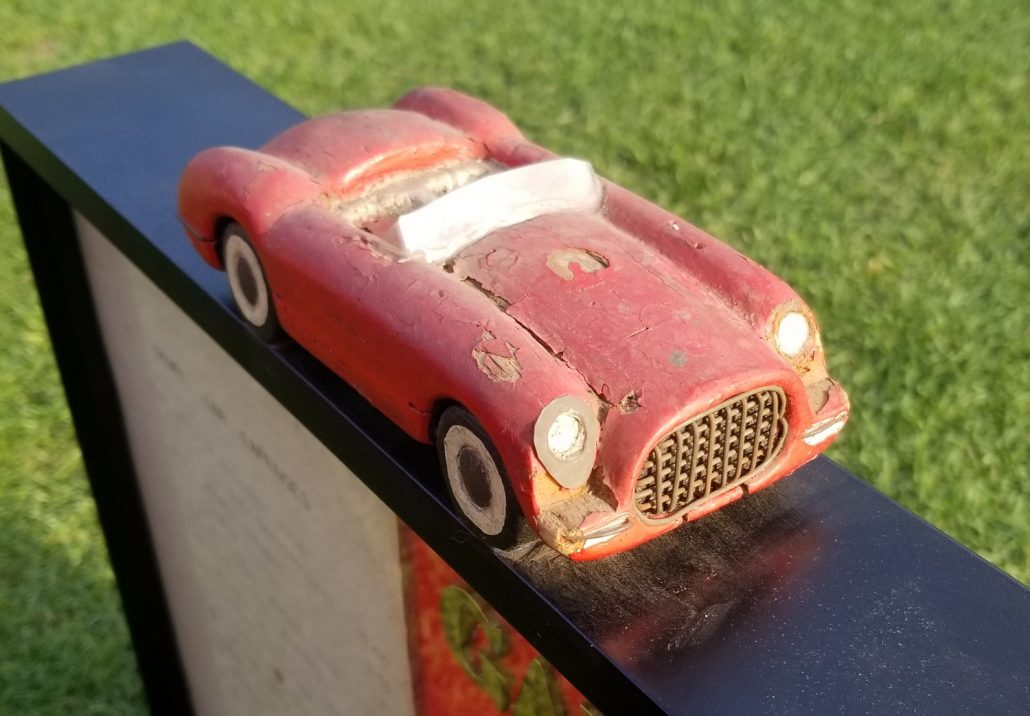 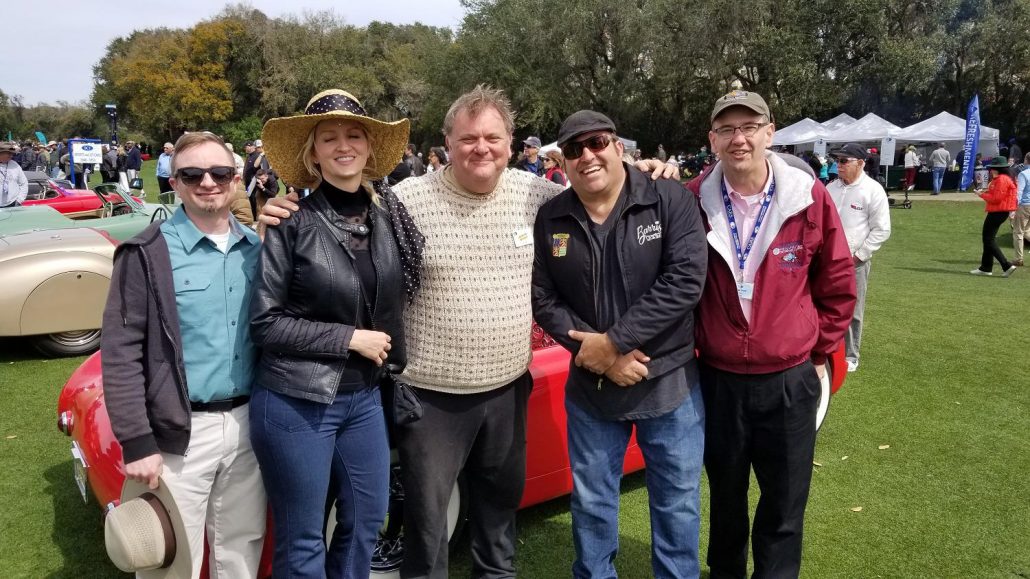 Friends Stopped By To See The Car. Here are from Left to Right: Patrick Smith, Gina Brown, Geoff Hacker, Richard Brown and Marvin McFalls. Thanks for stopping by guys and gal 🙂 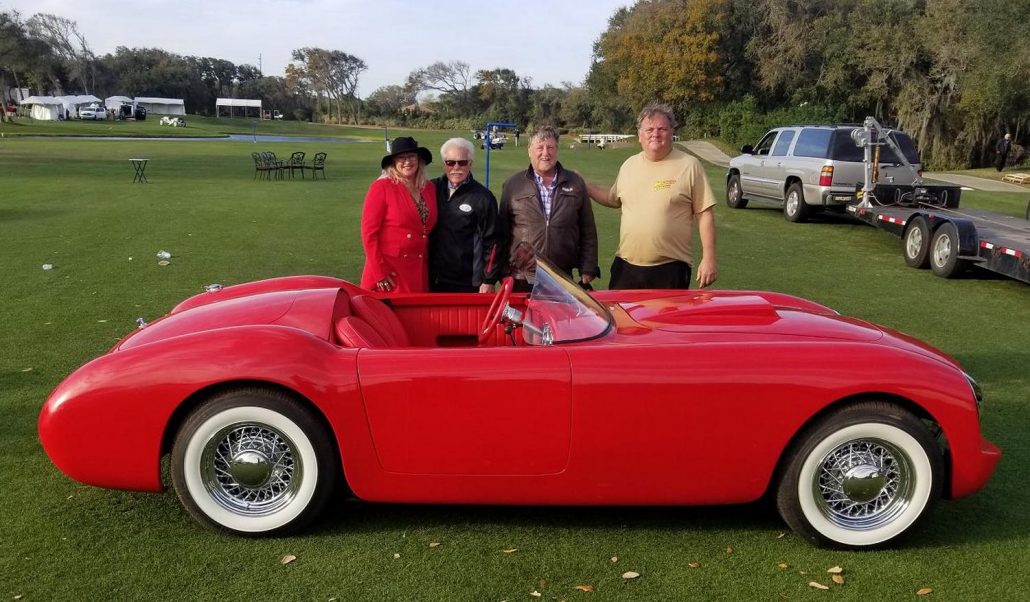 At the end of the concours day we had a special guest drop by – Wayne Carini. From left to right is Sue Ford, Wayne Carini, Brian Ford and Geoff Hacker. Thanks for sharing some time with us Wayne 🙂

As we’ve done in past concours, we came with materials to help showcase the Voodoo and its history to those interested.  First, we created “art cards” shown below with an image of the Voodoo on one side and its history on the reverse. 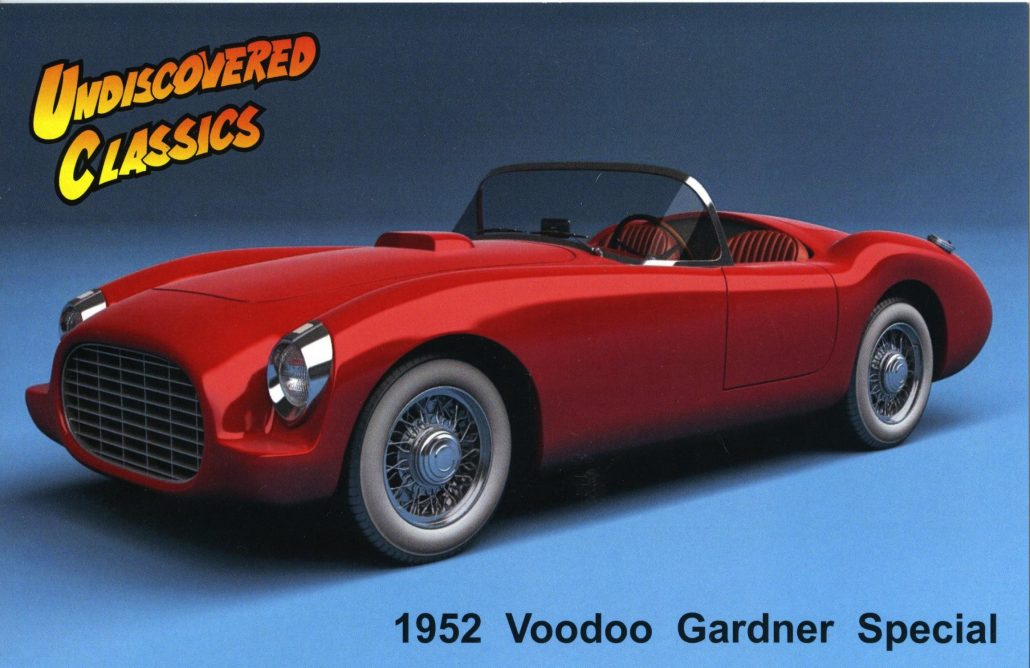 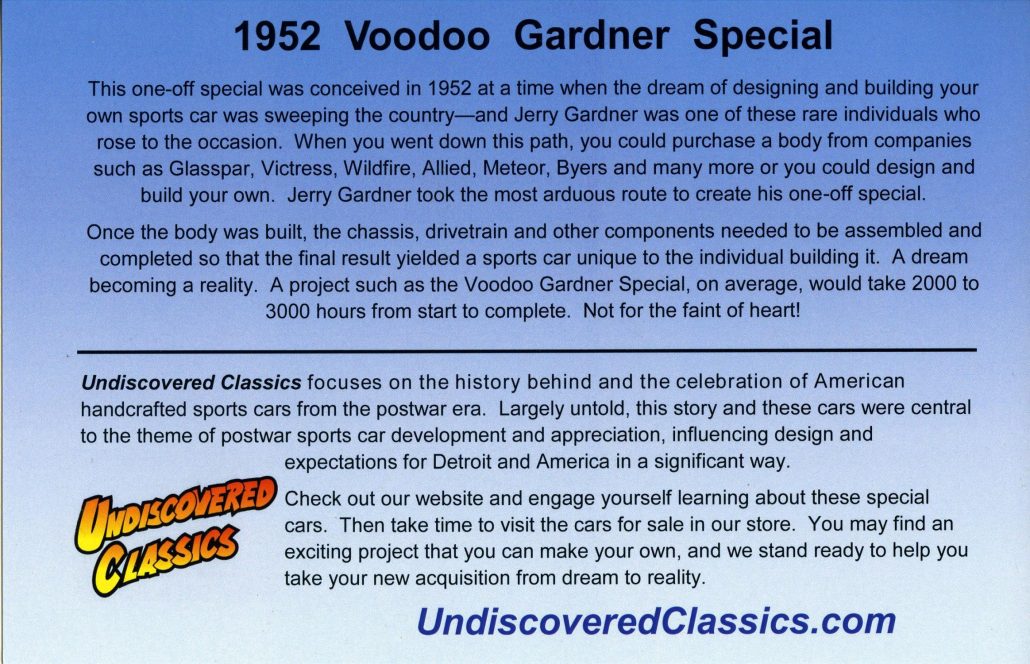 Next, we created an online book 96 pages in length sharing the history and design of the Voodoo Gardner Special.  You can view the book online for free.  Click on the image or link below to view the book. 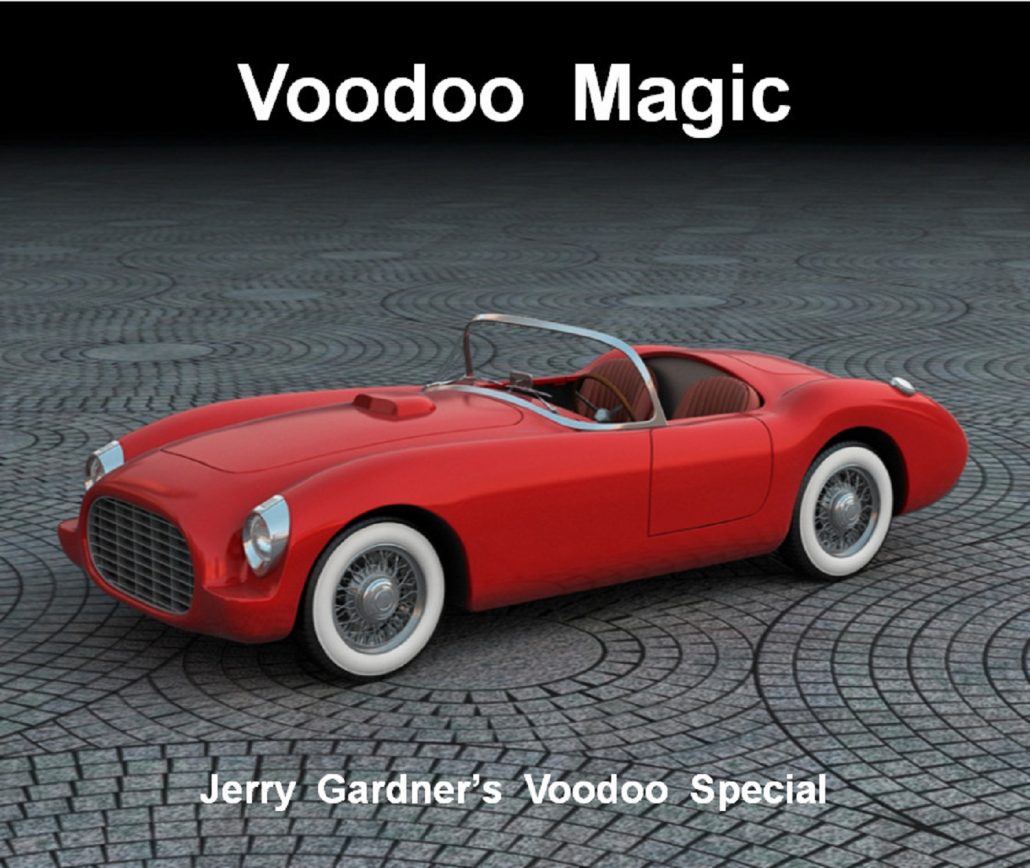 We also created a business card for Brian and Sue Ford featuring the Voodoo Gardner Special making it easier to hand out during the event for follow-up after the show. 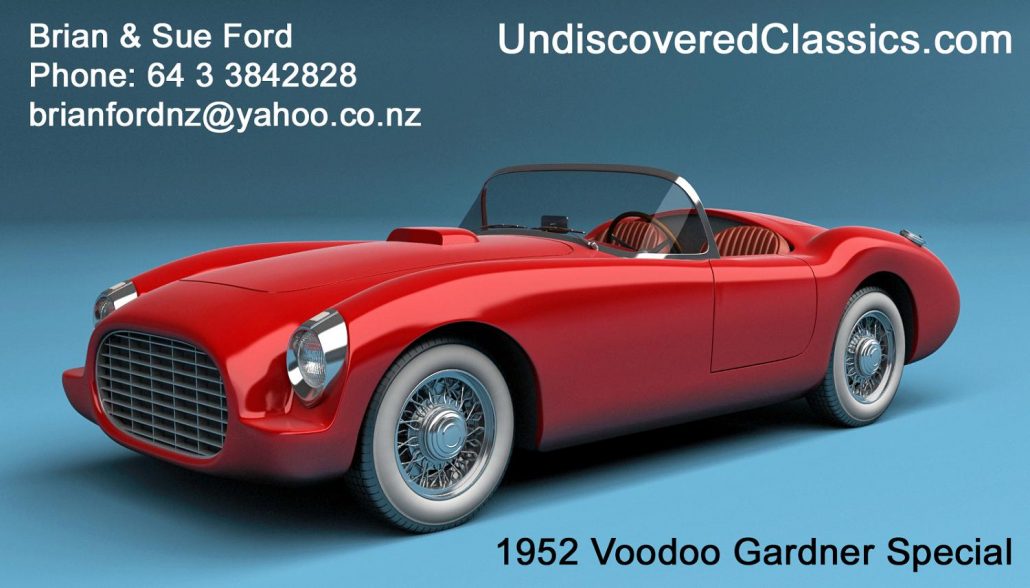 Media Coverage Before and After Amelia

Noted author Jim Motavalli covered the Voodoo Gardner special before and after the Amelia Island Concours d’Elegance.  His first piece was in “Penta” which is published by Barron’s of Dow Jones and Company.  Jim shared the following thoughts in his article on the upcoming Amelia Concours:

“I’ll be excited to see the one and only Voodoo Gardner from 1952. This was a gorgeous Cunningham-inspired fiberglass special with a Cadillac powertrain built by New York teenager Jerry Gardner—but not completed until recently.”

After Amelia, Jim followed up on a different website, Cartalk.com, with a photo of the Voodoo and his following thoughts:

“The show itself was spectacular, and set an attendance record at 23,000. This happened despite coronavirus having recently spread to Florida. All the events were packed, and people could barely move in the host Ritz-Carlton.

This story could be twice as long if I recounted all the glories on the field, but let me point out just one—the Voodoo Gardner Special. It looked like one more red sports car, but it had a fascinating story. Jerry Gardner of Saugerties, New York began the build with a custom chassis and a Cadillac flathead V-8. He then custom-made a fiberglass body of his own design. The work was 50 percent done in 1956 when Gardner was drafted into the Army.

By the time Gardner got back, sports cars were plentiful off the shelf, so he bought himself a Jaguar XK120 and left the Voodoo Special in the garage, in a state of suspended animation. It was still there when he died. Now the car has been fully restored by Geoff Hacker of  Undiscovered Classics, a specialist in fiberglass specials. It’s headed for new owners in New Zealand.”

We want to thank Jim Motavalli for including us in his writings.  Click on the following links to review both of Jim’s articles:

The Good, The Bad and the Very Strange at Amelia Island
Car Talk: March 10, 2020

It’s always an honor to appear at Amelia and we want to thank Bill Warner, Chairman of the Amelia Island Concours d’Elegance for his support and encourage in helping us showcase America’s Handcrafted sports cars to a large audience in the special event.  It’s also an honor to work with good friends such as Brian and Sue Ford in helping them attend and participate with their freshly restored car at one of the finest automobile events in the world.  Great thanks to all that make this possible.

Look for stories coming soon to Undiscovered Classics of the other 2 specials that were at Amelia this year – a Victress S1A special and a Devin sports car with excellent history.  Otherwise…hope you enjoyed the story, and remember…