One of the “secret weapons” of Forgotten Fiberglass is the fantastic number or resident researchers and experts we have that are “friends of fiberglass.”  One of those friends and researchers is Bob Cunningham.  Recently Bob pointed out a photo on eBay concerning the early use of fiberglass in a prototype / handcrafted Jeep styled “Victory” car.

“Pretty cool” I thought to myself.  And then I looked at the date on the photo – March 8, 1942.  Well…that’s pretty significant in our research because it was only 1 year earlier in 1941 that Ford created his first all plastic car – the “Soybean car.”  (some of you may remember that in 1939 it was only the trunk of a Ford that he reproduced in a fiberglass type of material – the full fiber-car was actually built in 1941). 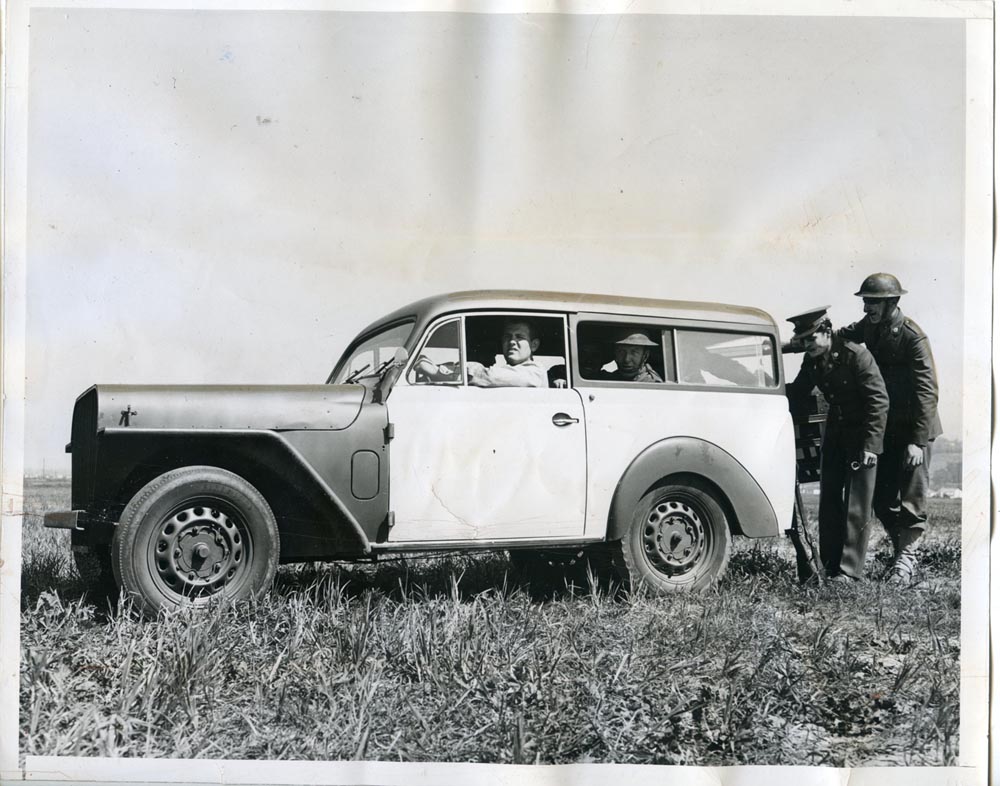 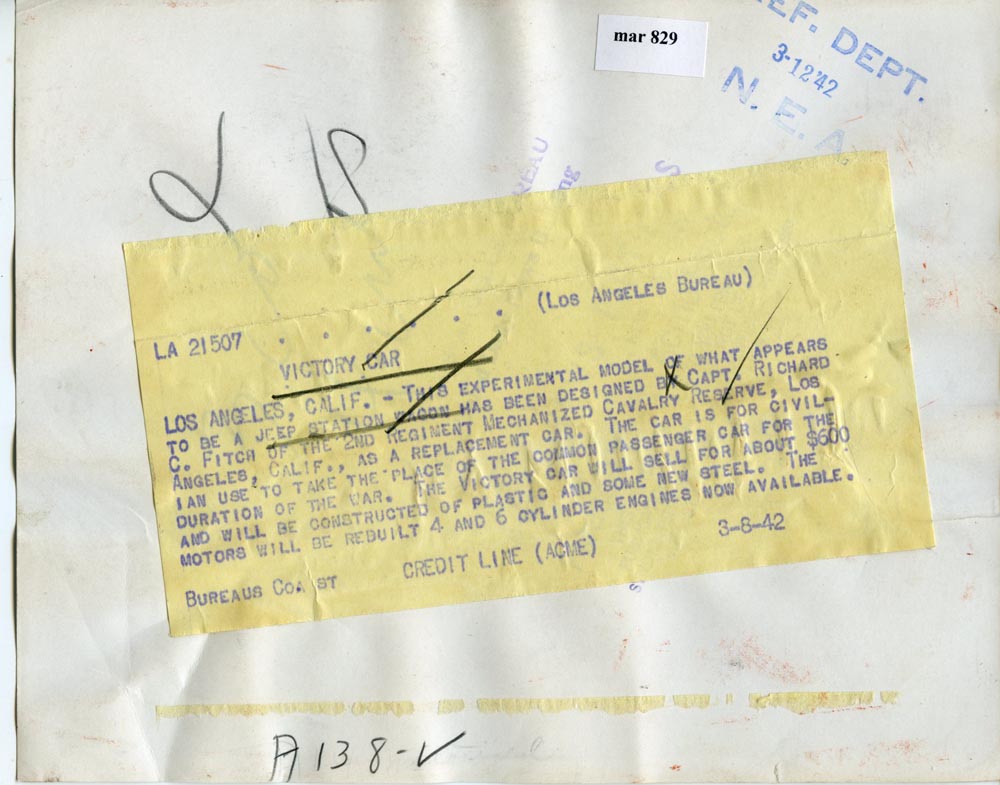 Caption: Los Angeles, California.  This experimental model of what appears to be a Jeep station wagon has been designed by Captain Richard C. Fitch of the 2nd Regiment Mechanized Cavalry Reserve, Los Angeles, California as a replacement car.  The car is for civilian use to take the place of the common passenger car for the duration of the war.  The Victory car will sell for about $600 and will be constructed of plastic and some new steel.  The motors will be rebuilt 4 and 6 cylinder engines now available.

Bob Cunningham is working on his latest book in a series called Orphan Babies: America’s Forgotten Economy Cars, Volume 3: 1943-1969, and has kindly given permission to share his insight on this important car from 1942.  Here’s an excerpt from his forthcoming book about the Victory car:

On January 1, 1942, all sales and delivery of civilian cars were frozen by the Office of Production Management. As the need for war material increased, President Roosevelt established the War Production Board (WPB) on January 16. The board briefly considered a plan that would have required five smaller automobile producers to “lump” their passenger car output.

All manufacturing would have taken place in one plant, thereby freeing the other four firms to concentrate solely on military output. Under the plan, name plates from Hudson, Nash, Packard, Studebaker and Willys would be attached to one Victory Car model in equal numbers for the duration of the war. Captain Richard C. Fitch of the 2nd Regiment Mechanized Cavalry Reserve in Los Angeles had developed a surprisingly attractive Victory Car prototype using jeep-like grille and front fenders.

His two-door station wagon was built up from used automobile parts, including Bantam station wagon rear fenders. Production plans called for bodies of plastic and steel. The car would have been powered by rebuilt four- and six-cylinder engines, all to sell for a projected price of $600. However, the WPB adopted a very different plan. On February 22, all manufacturers ended civilian automobile production.

Great thanks to Bob Cunningham for keeping us informed of such historically relevant uses of ‘glass in some pretty neat cars.  And…for his permission to share an excerpt of his forthcoming book.  Thanks Bob!