Welcome Aboard John – Great to Have You With Us!

We’re honored today to bring an author onboard for Undiscovered Classics who has tremendous experience in the handcrafted car arena – John Mellberg.  John was one of the first to use the internet to promote handcrafted cars having started doing this in 1997.

That’s impressive – it’s just a few years after the internet became public.  His website and postings were branded “Rare Component Cars” and the sites were available from 1997 through about 2005.  Then life took John to another successful arena.  Today, we welcome John back – a successful earlier founder of one of the main channels of communication for specialty cars, and look forward to hearing more from him.

I asked John to put together a background piece on who he is and his areas of expertise, and with great honor I say…..”take it away John”  🙂 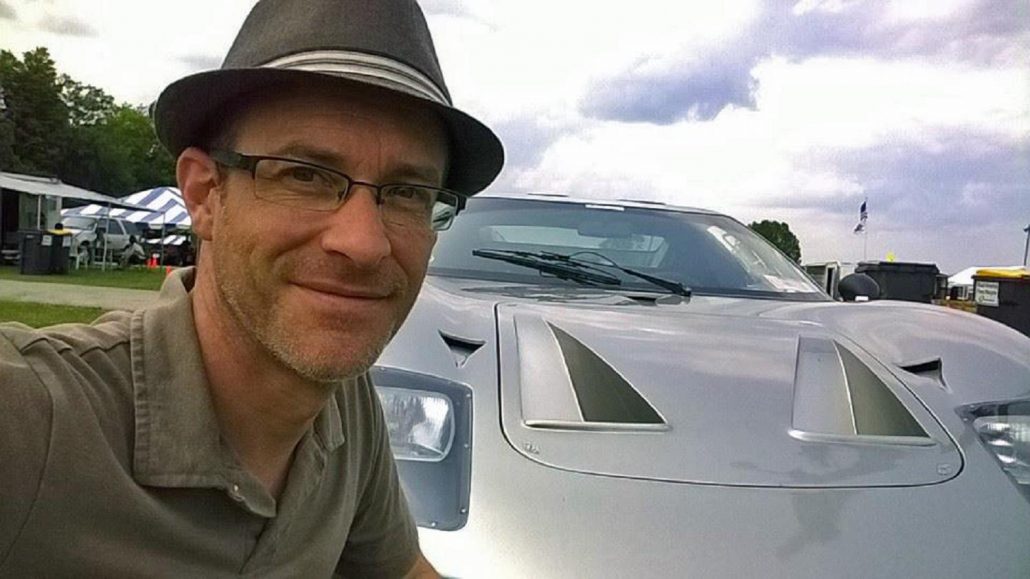 My name is John Mellberg, let me tell you a little bit about my background.

By trade, I am a software developer with more than 25 years in the field. I have also been a lifelong Car fanatic, artist, writer, musician, and amateur Kit Car Historian.

The roots of my interest in cars begin in the city of my birth, Detroit Michigan. My father was a Car Designer, working at the GM Tech Center under the great Bill Mitchell. His career spanned from 1968 to 1972, starting at Chevrolet Advanced Design Studio, then Cadillac, and ultimately Pontiac.

He too was a car guy, as one might expect. He always owned Pontiac muscle cars or sportscars, GTO’s, Trans Ams, even a Fiero. So, I grew up steeped in that world. It’s in my blood. 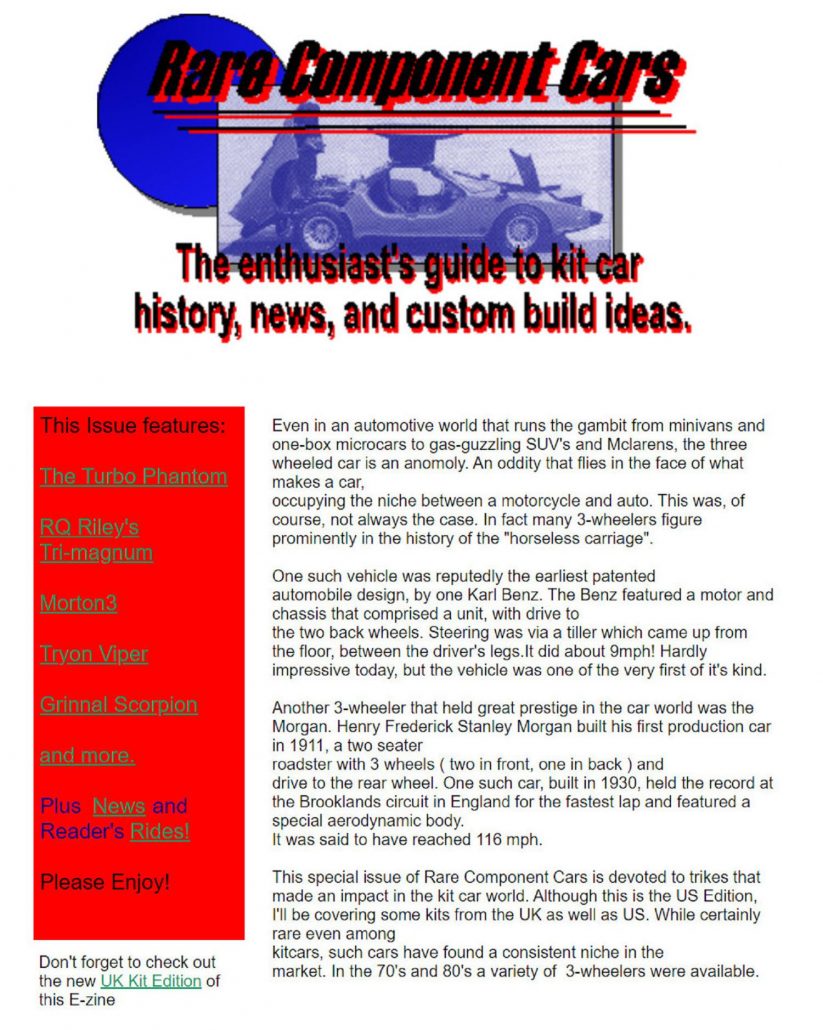 Another major influence on my obsession with the automobile was our family friend Bob Shaw, who was an entrepreneur, car collector, and noted expert on pre-war Bugattis. One of the most formative experiences in my life was when I was maybe 8 years old. Bob came by our family home with the original Alpine Renault A310 prototype, which he’d purchased right off the Geneva Auto Salon’s show floor. Getting a ride in it and going over every detail was life changing.

He also created a beautiful Ferrari Testa Rossa replica, through his company VIP, called the TR350.  Bob also commissioned his own “Special”, based on the Brooks Stevens designed Studebaker Hawk GT racecar. His car collection was enviable by any standard. He owned a Cisitalia, a number of Bugattis, 2 Alpine Renaults, a Saab Sonnet, and one of a handful of street prepared Ford GT40 homologation cars. The man is a hero.

Bob regularly provided me with UK Kit Car publications from publishers like Peter Filby when I was an 80’s teenager. He too enjoyed Kit Cars, especially “frumpy” English ones!  Having those would help later…

From an early age, I have followed all things automotive. Whether it was European exotics, Japanese Domestic Market cars, obscure specialty and tuner cars, and of course component cars. It probably helped that I grew up with access to my father’s unmatched library as a resource. It included a full set of Automobile Quarterly hardbound editions, Kodansha’s Car Styling, and most of the major car magazines. For obvious reasons I had a deep love of design, so that has always been a part of my passion for the automobile.

After an ill-fated attempt to follow in my father’s footsteps by going to art school, and a stint as a singer/songwriter in a Punk band, I became interested in the emergence of the internet. I decided to obtain the necessary hardware and learn Graphics software and HTML. I had two goals, to share my sci-fi and automotive artwork in an online gallery, and to publish an e-zine on the subject of kitcars. As it turned out, I had a talent for it.

Such was the birth of “Rare Component Cars” (RCC) which, in its original form, was a bi-monthly online publication that ultimately consisted of 3 separate websites. I had a US edition, one for the UK, and an archive for storing content from past “issues”. My focus was on kits that were original designs, ranging from dune bugs to 3-wheelers, to aspirational exotics from a historic perspective and anything I liked old or new. 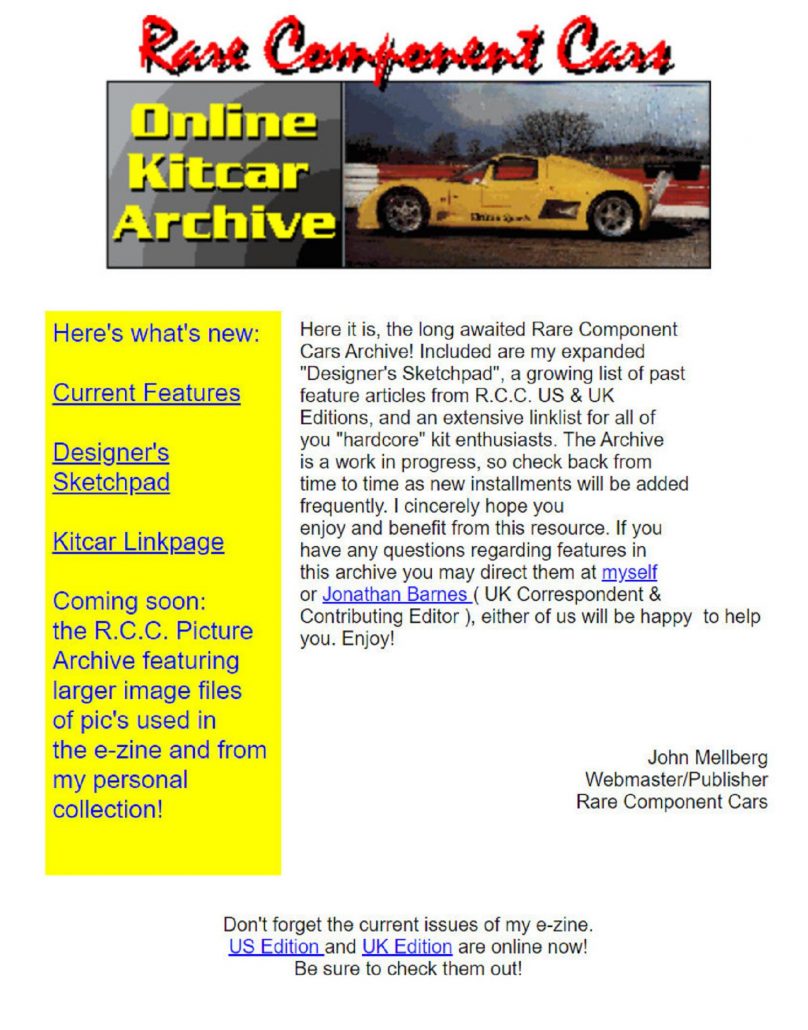 The e-zine was published from 1996 until 2000 and became widely known. I never made money from it though, that wasn’t really my goal. I wanted to share my knowledge and interests, meet like-minded people, and just have fun. In that way, it was very successful. I had online friends and contributors from all over the world helping me with my research. One of my 3 sites, the content archive, was even hosted by the late Shannon Larratt of priceofhistoys.com (now called Fiberclassics and run by Shannon’s friend Donnie Vivier).

While it wasn’t lucrative, it did enjoy some accolades, including a nod from well known automotive journalist Harold Pace who mentioned RCC in his Petersen’s Kit Car monthly column. It was linked reciprocally to most of the other kit sites on the net at the time and well regarded because of the unique content it had.  It was a labor of love and it helped sharpen skills that would lead to my professional career.

John also shared the Mission Statement for his company as follows:

Rare Component Cars is devoted to specialty cars, kit cars, replicas, home builds, and fiberglass “Specials” throughout history. It focuses on the rare and unusual from the beginnings of fiberglass cars, in the 1950’s, up to the present day, covering makes from all over the world with an emphasis on “original” designs. The overarching goal of this publication is to catalog and preserve the rich history of independently produced automobiles.

He’s also recently started to build his site again – Rare Component Cars.  John first brought it to Facebook and will next be working on a web page too.  We’re honored to have John as a contributing member of Undiscovered Classics and look forward to sharing his articles with you in the coming months.  For the meantime, those of you who are on Facebook can see John’s new work in action via his “Rare Component Cars” Facebook presence:

In addition, as John posts more articles here at Undiscovered Classics, you’ll be able to see all of his articles via his own contributing link:

Welcome aboard John – we’re excited to have you.  Hope you enjoyed the story, and remember…