Missing pieces of history….thought lost to time….uncovered by auto archeologists near and far.  We live for this “stuff” here at Forgotten Fiberglass – and today’s story is the result of one such adventure –  Joel Driskill’s Excellent Adventure 🙂

Joel’s hard work and fortitude continues to impress me each and every day.  He has taken on the herculean task of tracking down the friends and relatives of Chuck Manning in order to understand the man, his car, and his accomplishments.

Today we’re honored to share a never before published booklet put together by Chuck Manning and uncirculated (or little circulated) since he completed it in the early to mid ‘50s.  This book either preceeded the building of his race car or proceeded it – we’re still trying to determine an exact date of publication.

And what makes it even more interesting to me is that Chuck Manning talks about the development of fiberglass bodies in detail within the booklet.  His thoughts are right on target for the era, gang.  He also talks to the core about why specials would and should be based on Detroit production parts with an emphasis on limiting the number of specialized parts utililized in building a “special.”

Here’s what I heard from Joel concerning this booklet:

Today’s story is possible thanks to the generosity of Chuck Manning’s nephew John Manning.  I got in contact with John recently and he was willing to share his stories and knowledge of the Manning Special with me.   He was even generous enough to give me what he had of Chuck’s Personal Memory book which contained today’s story, many pictures, articles and objects that will help in the research and recreation of the Manning Special I’m building

This booklet by Manning seems to be an early attempt at writing an article which I think would have led to the series of articles that he wrote for Road & Track.  The body of the writing isn’t of great consequence when compared to what he finally wrote in Road and Track but is filled with great illustrations of what he was thinking when he was designing his car.

It shows how he wanted the body to be constructed, a single central body with attached winged fenders, and how he wanted to construct his “half swing” axles that he mentioned in other articles that have been posted here on Forgotten Fiberglass.  The illustrations also show an example of how the tooling would be constructed

“A company contemplating producing such a car would have to be content with a limited production (not of Detroit magnitude) but would be rewarded by the very limited tooling and facilities required, and by the world-wide recognition their name would achieve.”

He was right – people all over the world recognize the names Glasspar, Victress, Woodill Wildfire, Almquist, LaDawri, Kellison and many others to this very day. These were car companies that were created out of people’s homes and garages with little tooling and the ambition to create a true American sports car.

His own idea would ultimately be right on target as he proved that a well thought out home-built, handcrafted car could compete with the major manufacturers of the day as his car would go on to win races against factory sports cars

Enjoy the booklet (14 pages in total) and illustrations and thanks to John Manning for opening this forgotten page of history to the rest of us. 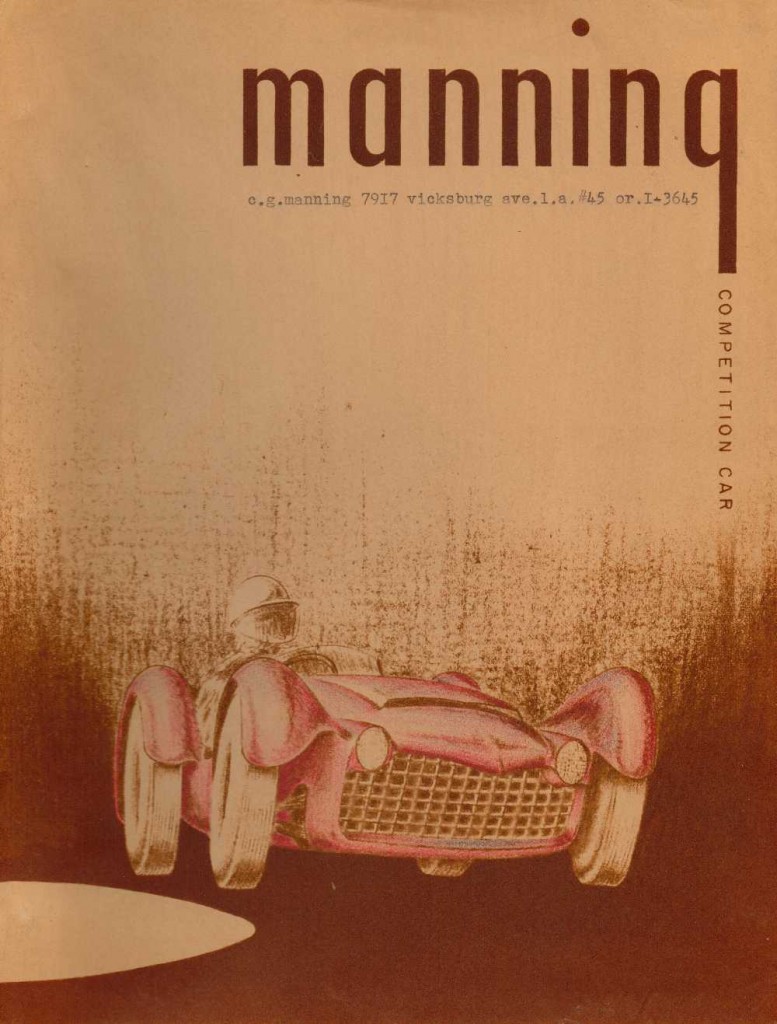 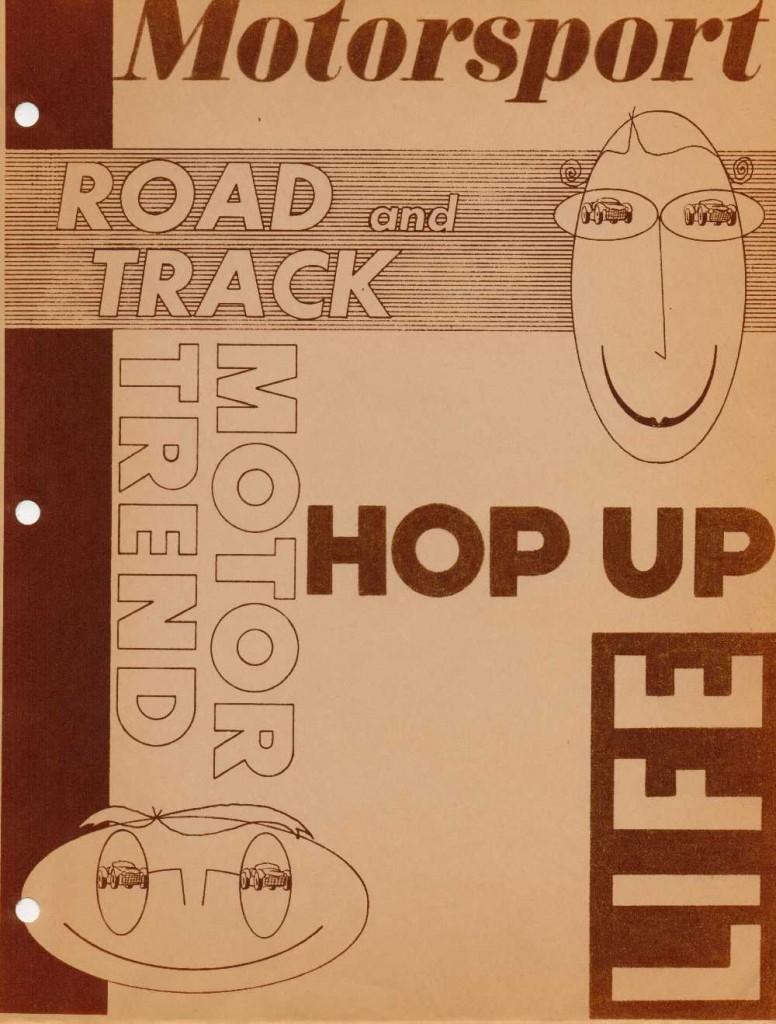 This brings up the universal question, what is a sports car?  A sports car is a car that is fun to drive.  Unlike the Detroit product, which emphasizes its boring simplicity of operation, owning a sports car becomes a hobby of almost unlimited scope. Driving suddenly becomes an exciting experience where each increase in driving skill becomes a source of increased enjoyment.

The next step, by the enthusiast, is the attendance of “Road Races”, to see the men who know how to do it.  Now comes the surprising realization – some makes consistently win, while others only “finish”.

Gradually, the sports car owner finds himself mentioning names like Cunningham and Mercedes with a respect almost approaching reverence. These names become a synonym for the very best in design and construction of things mechanical. 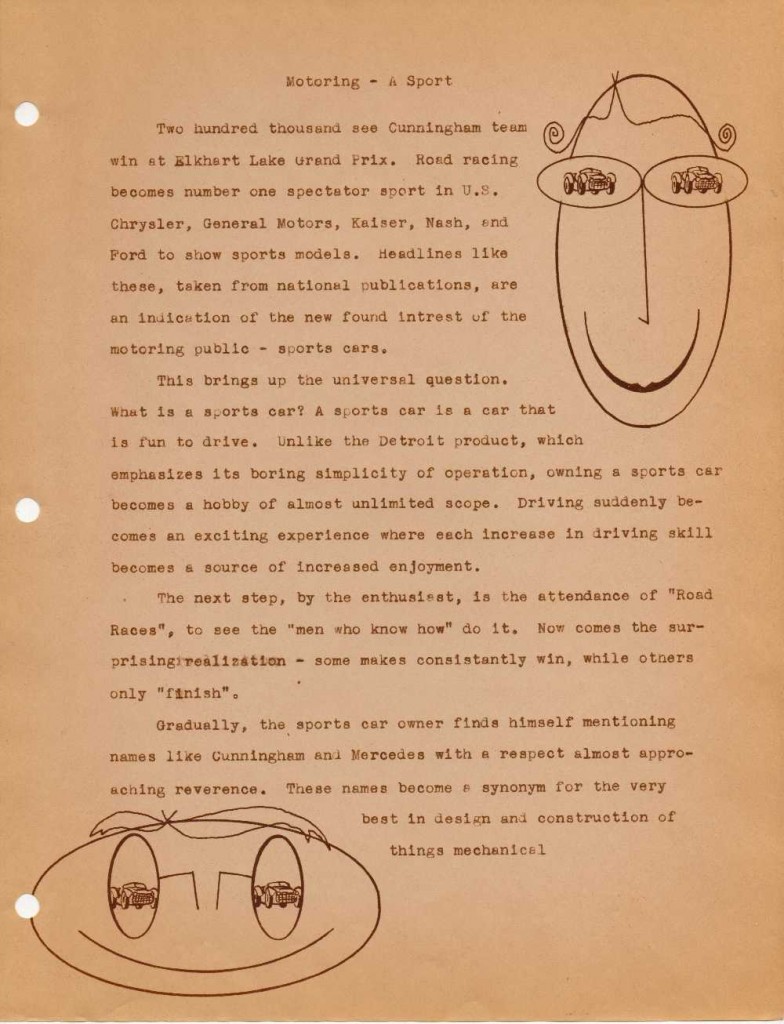 Perhaps the most significant development, in recent years, of processes and products applicable to sports car construction is in the field of plastic laminates. An appealing sports car body design has, in the past, always required the high unit cost associated with hand forming, or extensive investments in special tooling to be amortized over a large number of units.

Now, with the use of fiber-glass laminates, the plaster mock-up represents the hand work required and a fiber glass female mold, taken from the mock-up, becomes the tooling.  The result is a series of very low cost bodies, the shape of which need not be compromised by deep drawing problems, and whose damage resistance, ease of repair, and light weight, make it completely superior to any type of metal body. 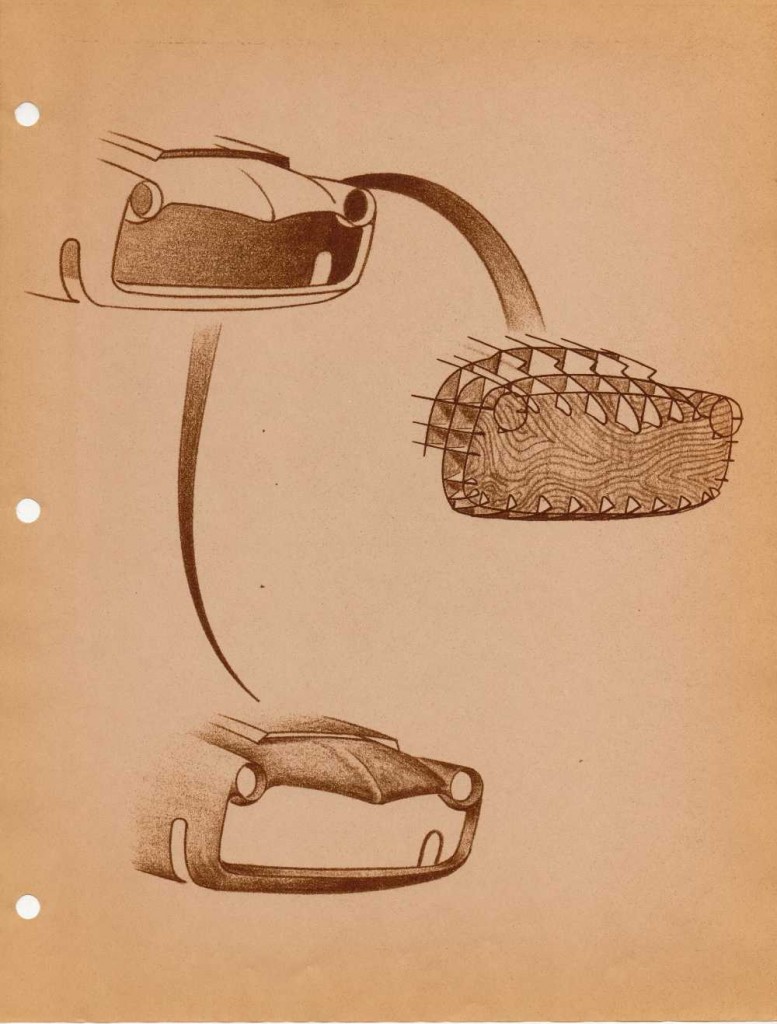 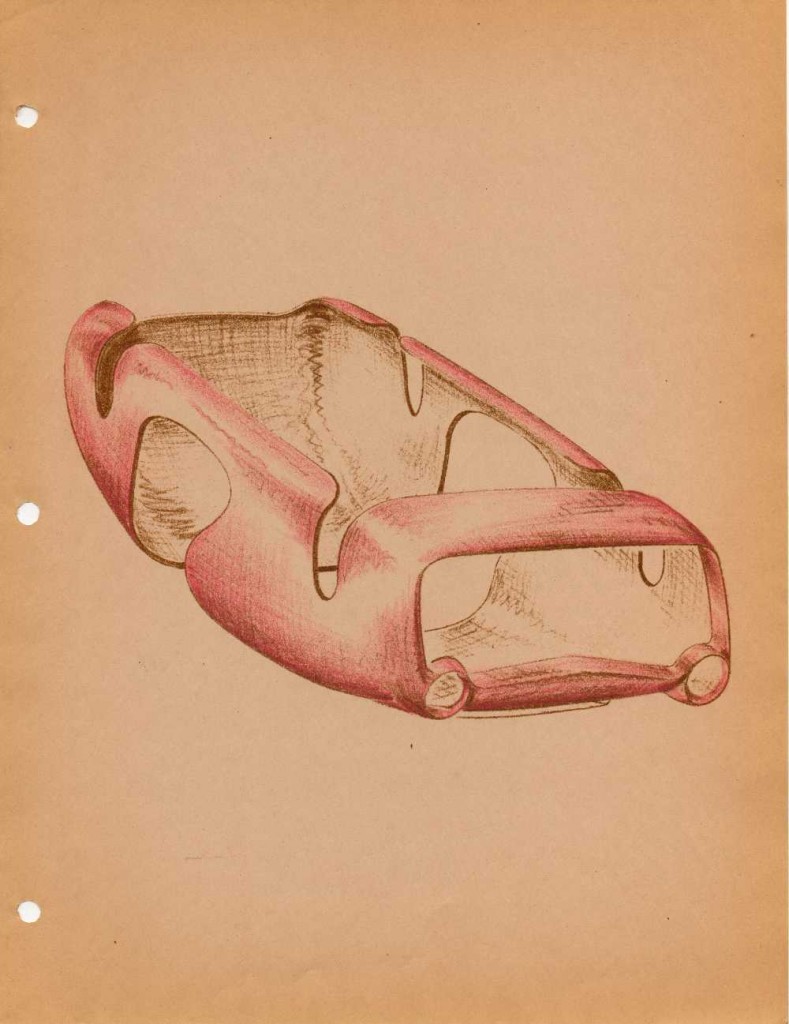 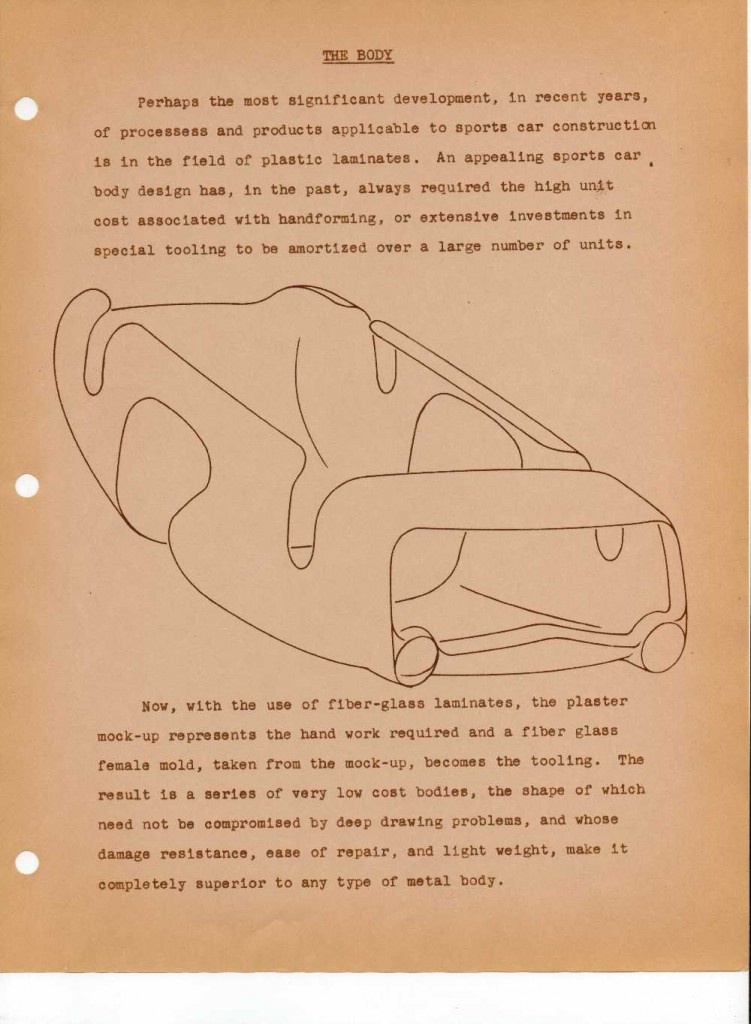 Like all the individual components, the chassis has a few design requirements that cannot be compromised.  Simplicity – from a weight, number of working parts, and initial cost standpoint – must be the outstanding feature.  There have been a number of designs that have demonstrated this. The English B.R.M. is probably the most highly developed car ever built.

Its performance, on paper, suggests it has no serious competitor. It has yet to win, or even finish a major race. One or more small mechanical failures, of its thousands of working parts, has seen to this.  Accessibility – adjustments and replacements of working parts, in a competition machine, are unavoidable. Easy access guarantees this required attention.

Standard replacement parts – One need only talk to a Ferrari owner, who has waited six months for a special metal covered gasket, to hear a vivid description, in four letter words, of the frame of mind poor parts availability induces.

With the number of variety of parts available from the Detroit manufactures, there is seldom sufficient reason to design a component around anything else. The functions of the necessary special parts can, in nearly every case, be limited to features not requiring replacement. 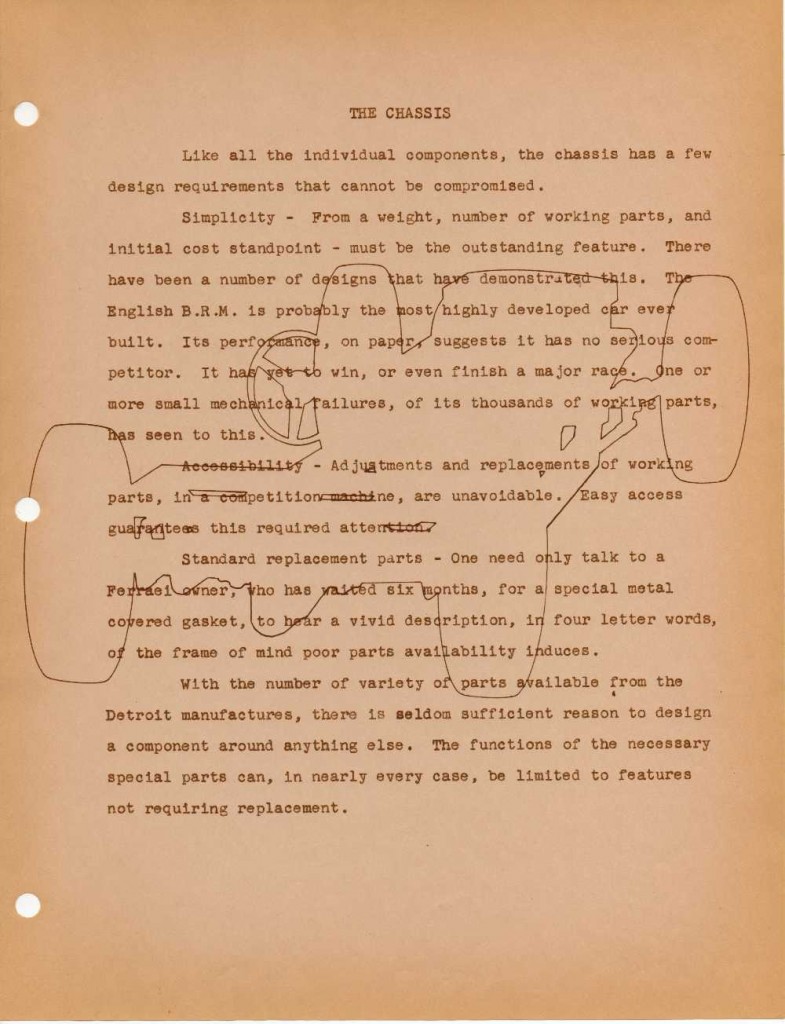 Here is the key to the success of the competition car. A carefully designed frame, because of its lighter weight, is capable of adding 30% to the acceleration of the machine. This same design can add 100% to the cornering ability of the car, on a corner whose surface is only slightly uneven, because of its superior torsional rigidity.

One need only note the frame design of anything from and M.G. to a Ferrari to see how often this feature suffers. The primary function of the frame is the control of the suspension of the vehicle.  The designer that recognizes this provides a frame torsional rigidity such that a portion of the sprung weight, amounting to at least four times the unsprung weight, is effective (by means of suitable damping) in controlling the motion of the wheel.

This is impossible with a frame so flexible as to bend and twist like an undamped spring.  Here the mass, effective for suspension control, is only that portion of the sprung weight that is placed on the corner of the frame to which the wheel is mounted. The remainder of the sprung weight is effectively insulated from this corner, by a frame – often more flexible than the springs. 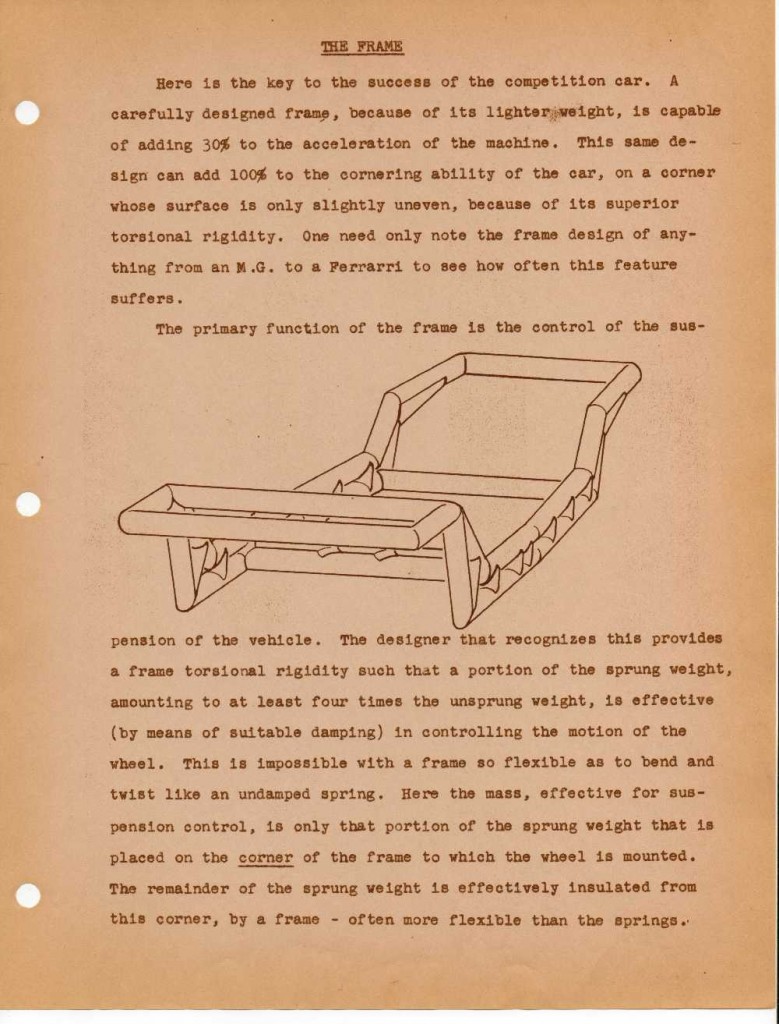 The number of possible suspension geometries is, of course, very large.  There have been many types built, each with some particular advantage emphasized.  For the competition car, the solution is seventy-five percent complete when a type featuring the “sprung” differential is chosen.

Of the dozens of types with this feature, there is one layout that is outstanding. The “Half Swing” axle, positioned by dual trailing links, offers a range of geometric and dynamic possibilities combined with a simplicity of construction not approached by other designs. 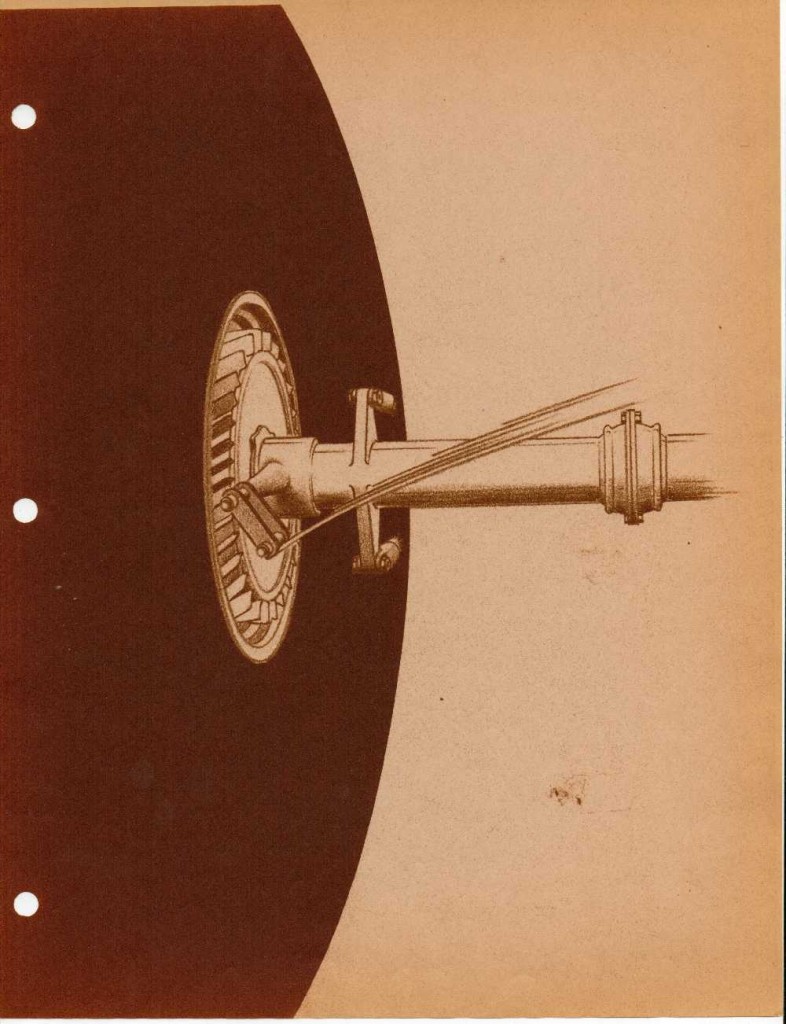 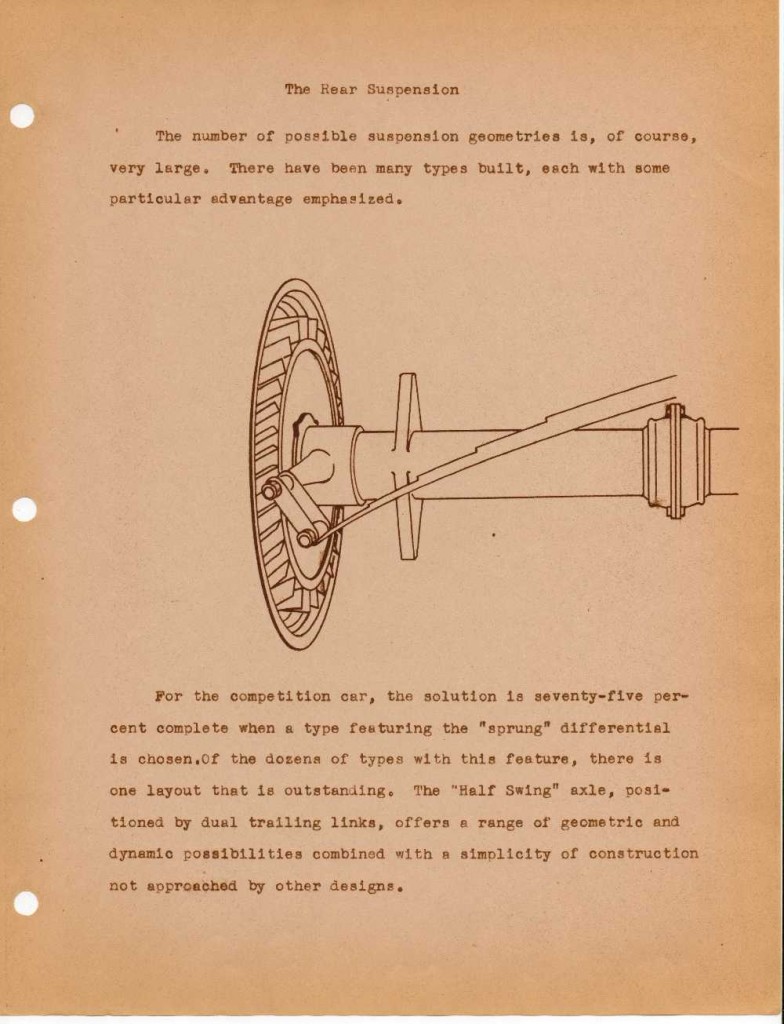 Here the choice, though not so clear cut, is again the “Half Swing, dual link” axle.  The installation, though similar in appearance to the rear layout, makes use of the adaptability of the design to provide the necessary differences in geometry for the best performance available in a corner, combined with the correct “feel” (defined as a linear force-response curve, or as low driver skill required). 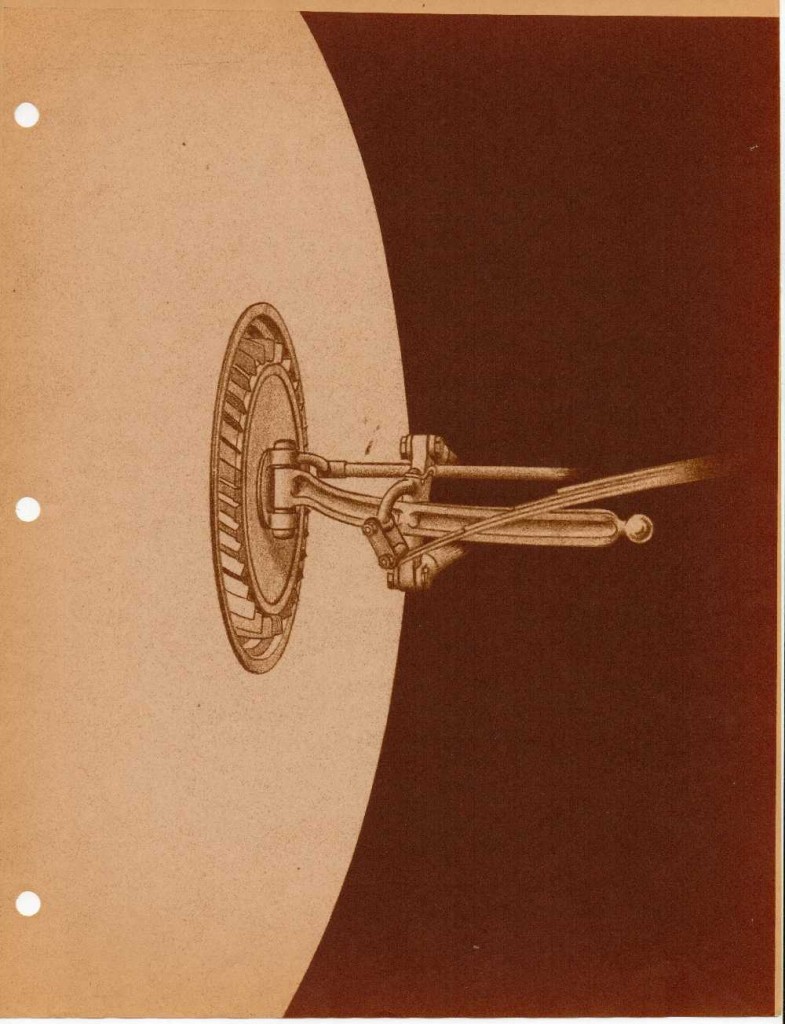 Brakes are the one design feature most commonly neglected in the layout of a high performance car.  This neglect was summarized by Ettore Bugatti in his classic statement:

It is apparent how faded brakes, by moving the “shut-off” point too far back from the corner, effectively remove a car from competition. Yet, not one design in one hundred, adequately provides theses brakes. The solution is high conductance cooling fins, intermolecular bonded to the cast iron drum, providing enough heat dissipation capacity to entirely prevent brake fade. 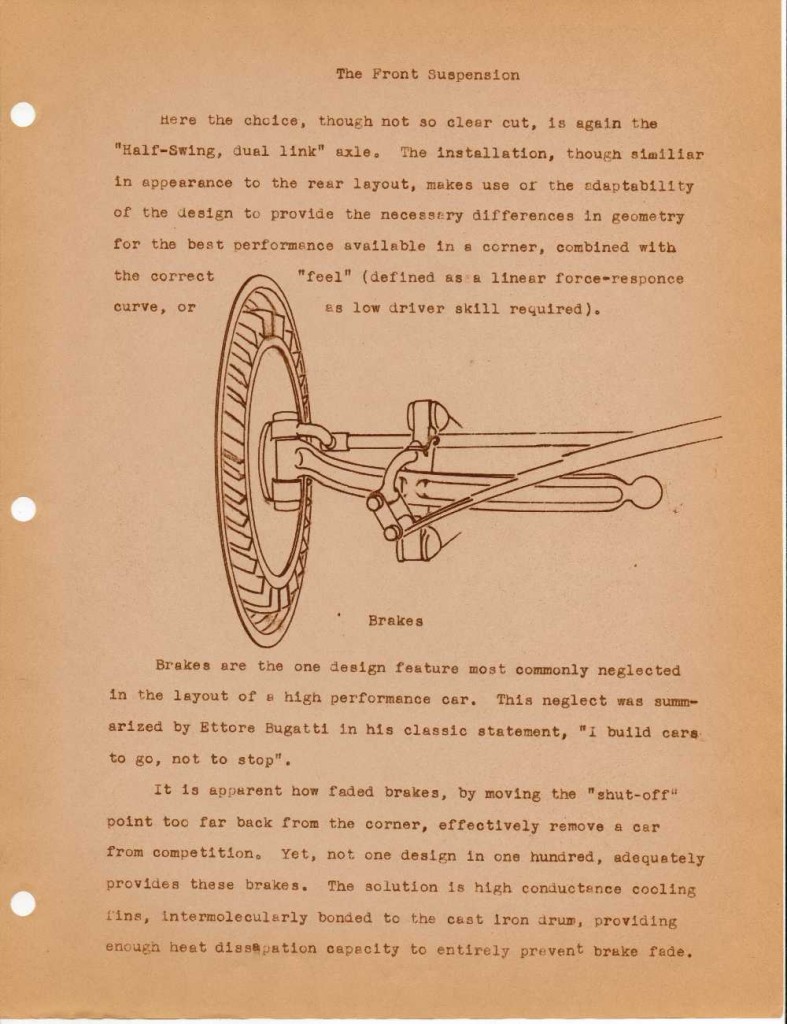 The above sketches present a picture of a product for which the demand is illustrated by the circulation (10,000,000) of the periodicals covering such activities, and by the import figures (10,000 per year) of similar products received from other countries.  These imports, burdened by high tariffs and poor service facilities, have increased each year since the war. In short we have a ready market for a domestic sports car.

A company contemplating producing such a car would have to be content with a limited production (not of Detroit magnitude) but would be rewarded by the very limited tooling and facilities required, and by the world wide recognition their name would achieve.

There is, of course, the one outstanding choice – McCulloch Motors. 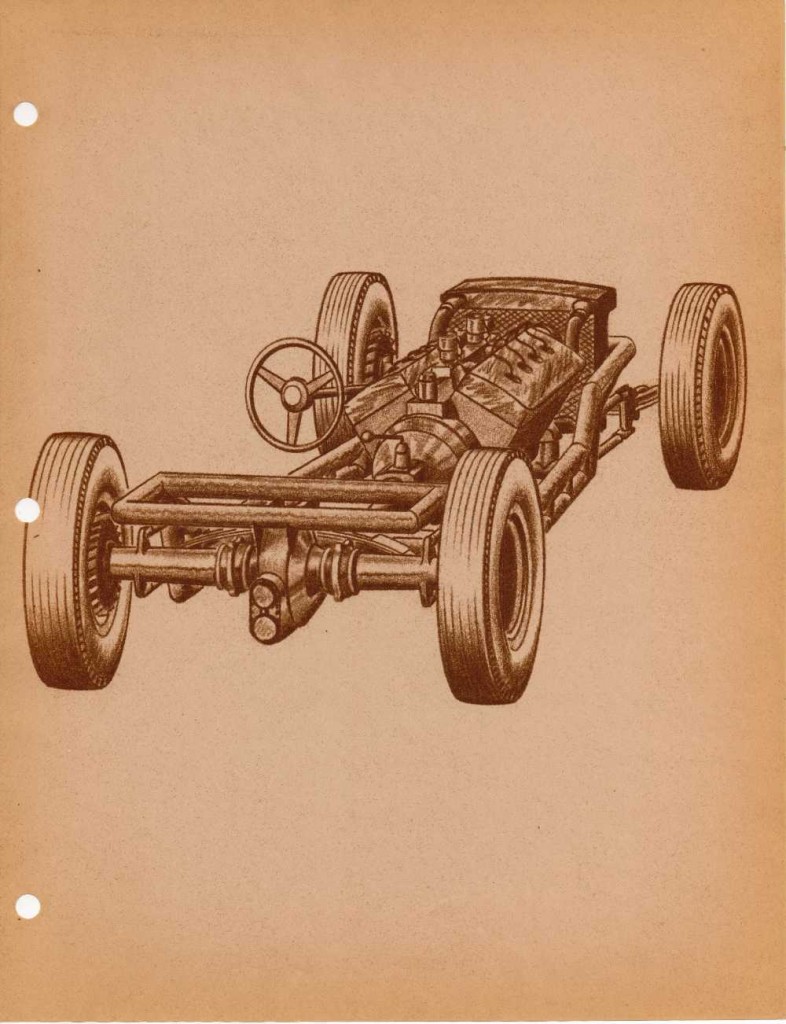 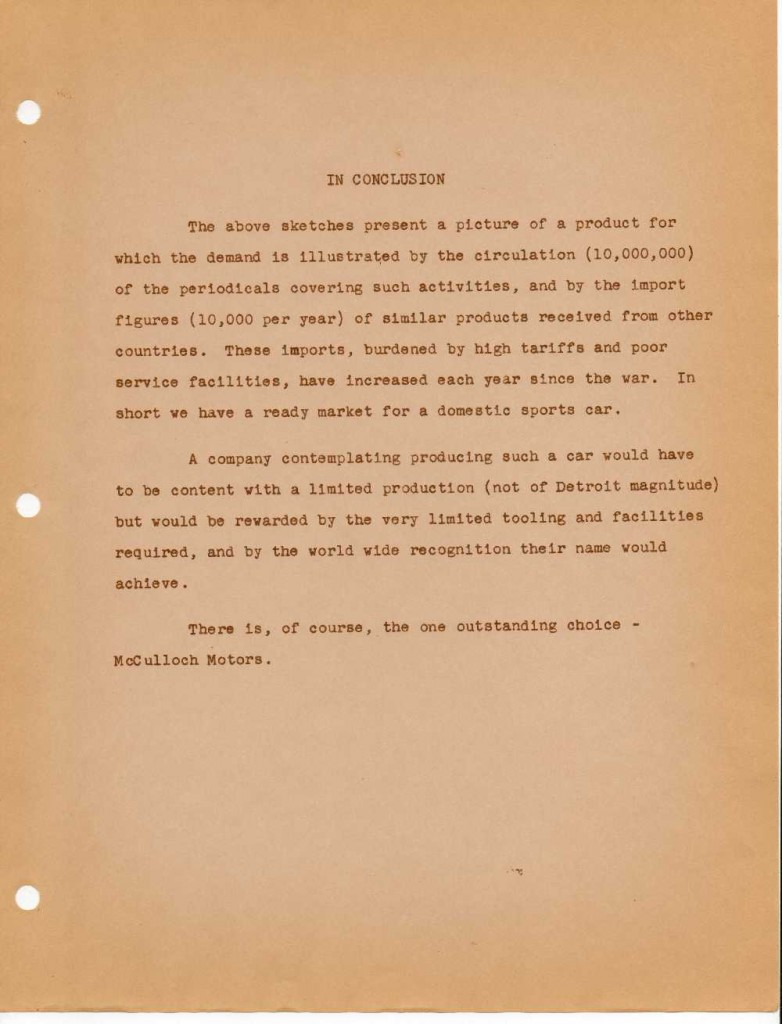 So…was this booklet completed before Manning’s Road & Track articles?  Was it completed after?  And why did Manning end it by identifying his company of choice for production – “McCulloch Motors.”  It’s interesting to consider these questions and some of you may be able to answer it if you delve into Chuck Manning’s articles posted here – as a result of Joel Driskill’s work – on Forgotten Fiberglass.  Just click on the link below to view all Chuck Manning Sports car stories.

Thanks again to Joel Driskill for his willingness to share this article here for everyone’s review.  And be sure to check out Joel’s website and watch his progress on building his own “Chuck Manning Special.” 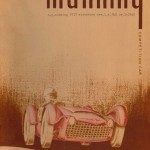 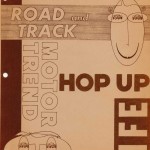 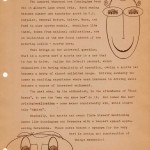 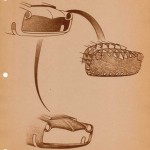 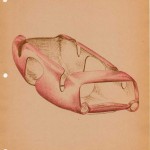 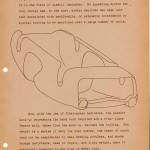 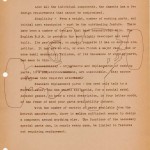 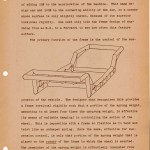 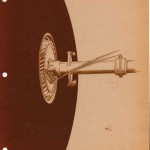 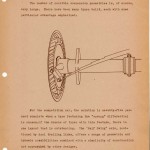 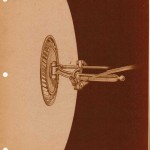 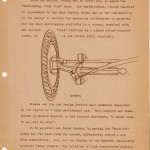 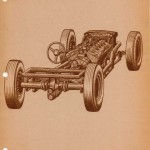 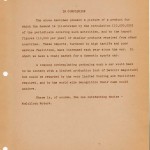 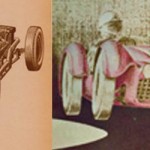