Above: The 1951 Manning Special at Speed – And The Missing Badge

I met Joel 10+ years ago when he and his family lived in Huntsville, Alabama.  He was then and is now a “stress engineer.”  So you ask, “What’s a stress engineer?”  Here’s a definition from an aviation website:

“Stress Engineers play a vital role in the engineering of aircraft. Their main role is to determine the stresses and strains in materials and structures when subjected to forces and heavy loads. In the aviation industry this will mainly relate to aircraft and rocket bodies.  However, analysis could also take place on anything from bridges, tunnels, and all the way down to plastic cutlery.”

In his career, Joel’s level of precision has to be flawless, and it’s not surprising that he takes this same level of exactness to everything he does – including research into one of his favorite subjects – early postwar handbuilt sports cars.

Joel has been building an exact replica of the Manning Special using the techniques and blueprint design concerning how it was originally done by Chuck Manning himself.  And did I tell you that Chuck Manning was a stress engineer too?  How ’bout that!  In today’s story, you’ll learn why it’s been taking Joel such a long time to create his car, and why it will ultimately be worth it.  So off we go and take it away Joel 🙂

The Manning Special: In Search of Lost History
By Joel Driskill

I’ve spent many years researching and recreating the Chuck Manning Special.  Longer than it should have taken but that’s a story for another day.

One of things that have taken me so long on this project are getting the details right. I could have skipped many of these details and had a completed car already but that would make too much sense for a project of mine.  Anyway, I’ve been able to identify most of the details of this race car, but there are a few that I have yet to figure out. One of the details that’s eluded me was the plaque that shows up on his Steward Warner (SW) 8 gauge panel in the magazines.  It’s in the upper center of the dash between the two large gauges.

My first thought back when I started this project was that it must be a Stewart Warner badge or something like that.  At that time, all I had were the magazines – no actual photographs/slides.  The pictures in the magazines didn’t really help much as they were too grainy to get a good view of it.  Hop Up magazine gave a decent shot of it in the August 1952 issue as shown below: 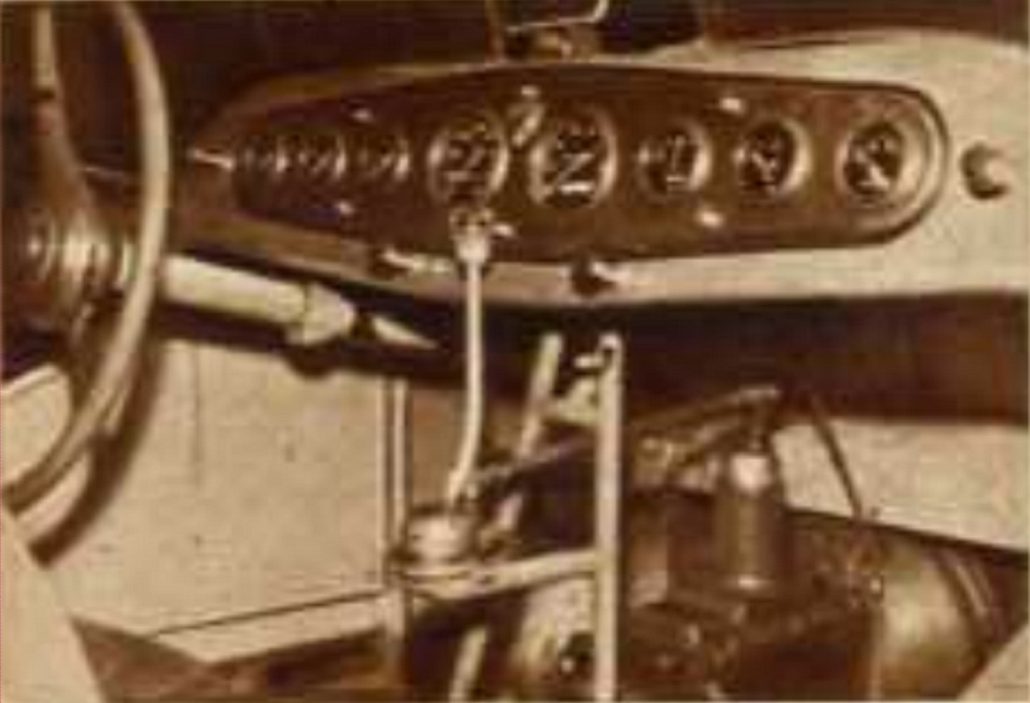 Another image showing the dash from the December, 1952 issue of Popular Science is the best of all magazine shots,.  See below with badge circled in red. 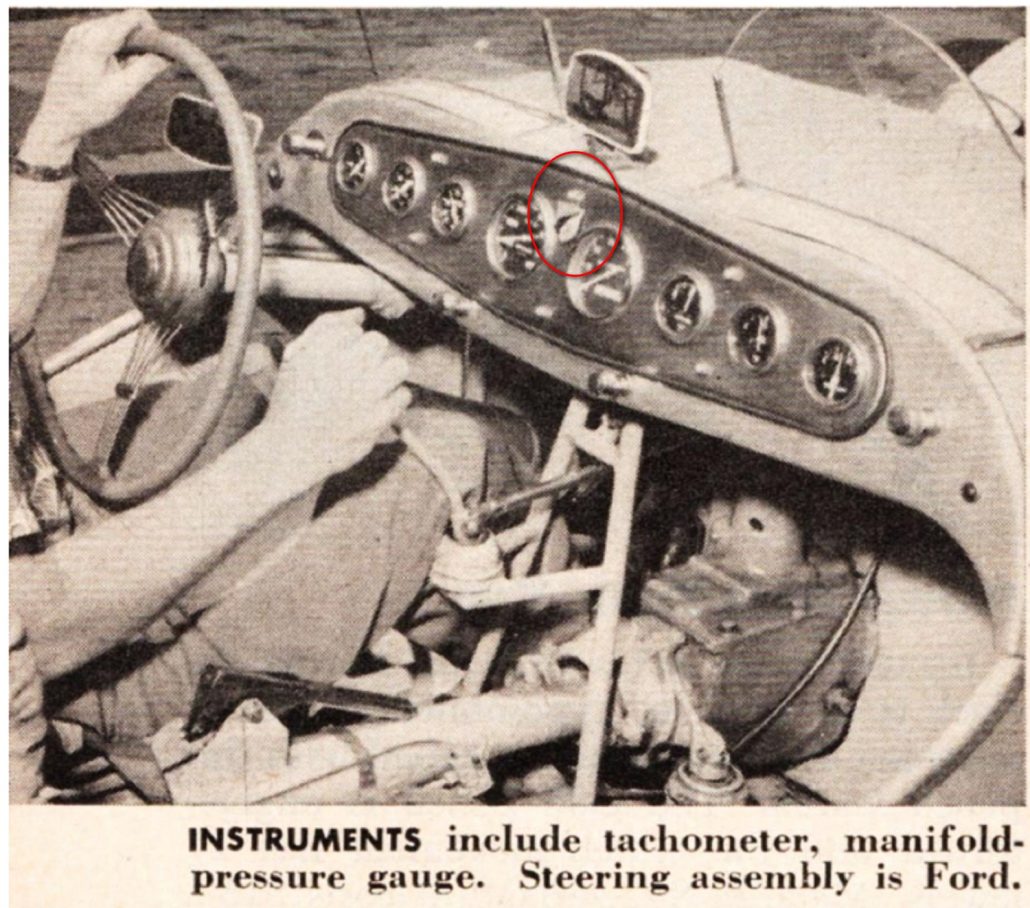 The August 1953 issue of Honk magazine (below) shows yet another image but probably the worse of all of them. 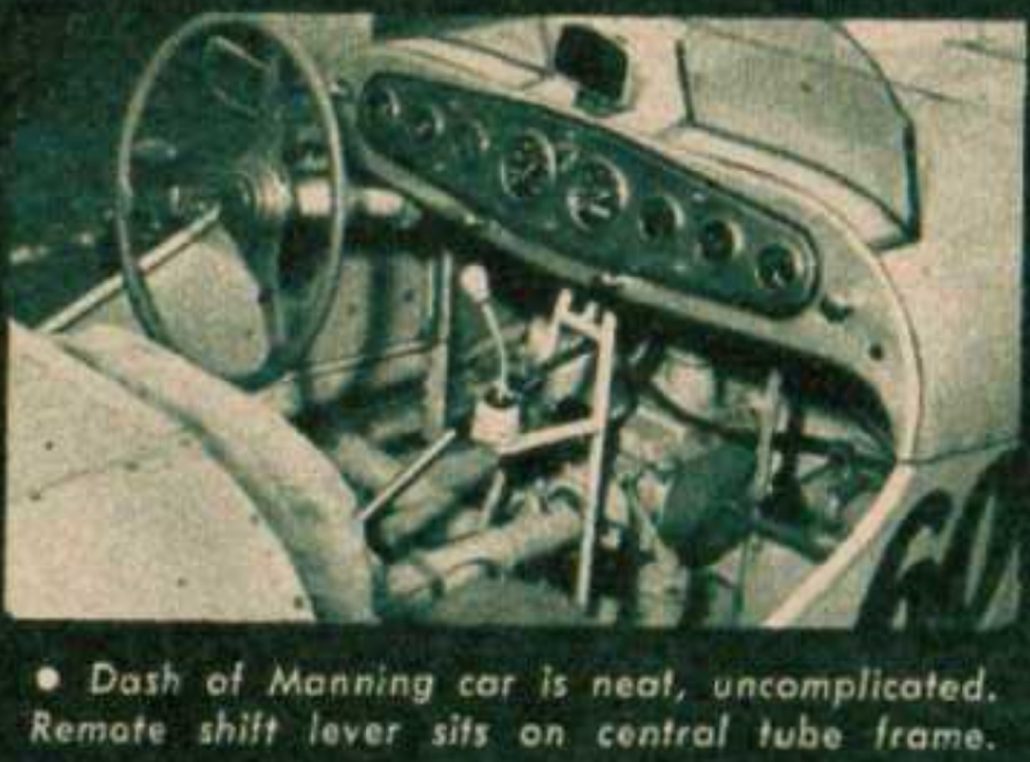 With these three images I had an idea of the shape and size of the plaque.  I couldn’t, by internet searches or by looking through my Stewart Warner literature, find a SW badge that looked anything like it.  But this theory was finally put to bed when I acquired build photos of the car from the 1950s.  If it were a SW badge, it would most likely have been on the dash when he purchased it.  It was not.

My next theory was that it was probably a dash plaque from one of the races, it only makes sense right?  What made this theory probable was that plaque on his dash doesn’t show up in the magazines, or any other images for that matter, until after he won the Palm Springs race in March 1952. I googled the heck out of any combination of “Palm Springs Road Race Plaque” that I could think of or looked up any car that I knew raced in that event and had some hits but nothing that matched the shape of the badge – or anything like it.

On the “Just a Car Geek’s” website, the author writes about a craigslist ad for a Simca that had a brass dash plaque from the 1954 Palm Springs Road Races shown below: 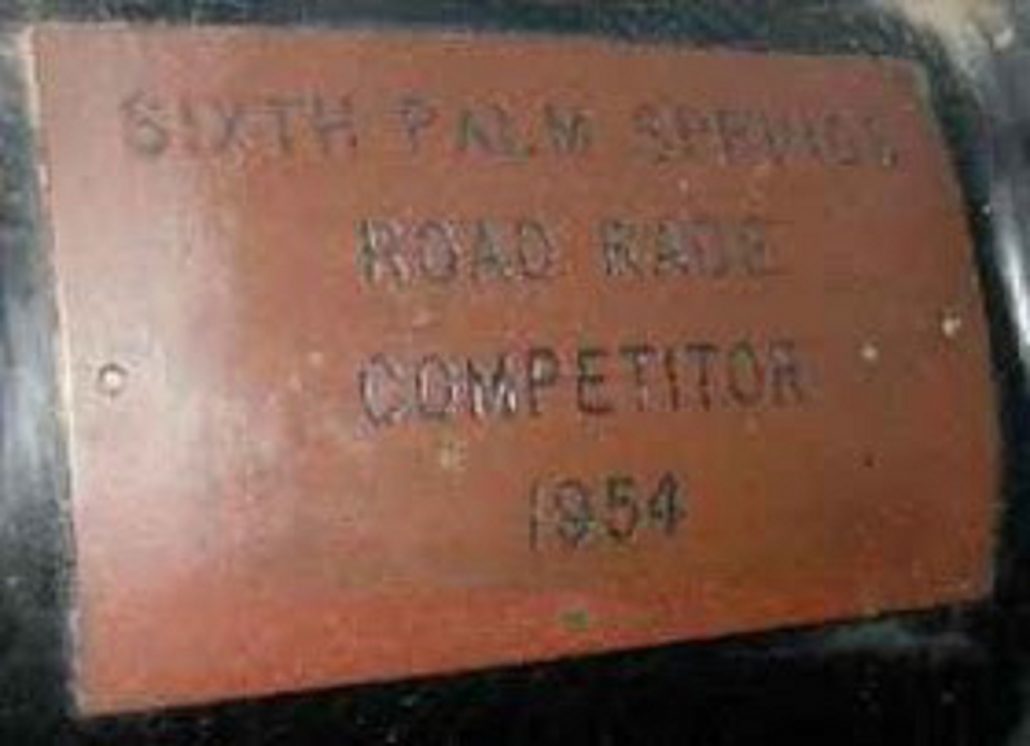 The low quality nature of this plaque, when compared to what I could see in the images of Chuck’s, lead me to think that the one on Chuck’s dash wasn’t a race participant plaque.  With the relatively low attendance at the 1952 race compared to later events (as racing became more popular) I would think that the quality of the plaques would have gone up – not down.

Later CSCC and SCCA dash plaques typically have very nice intricate etching that is filled with lacquer or enamel. Although, there’s an amazing competitor’s plaque on the FCCA’s (Four Cylinder Club of America) website from 1952, that wasn’t anything like the 1954 one, but it didn’t resemble what I was looking for. Click here for more information about the plaque below. 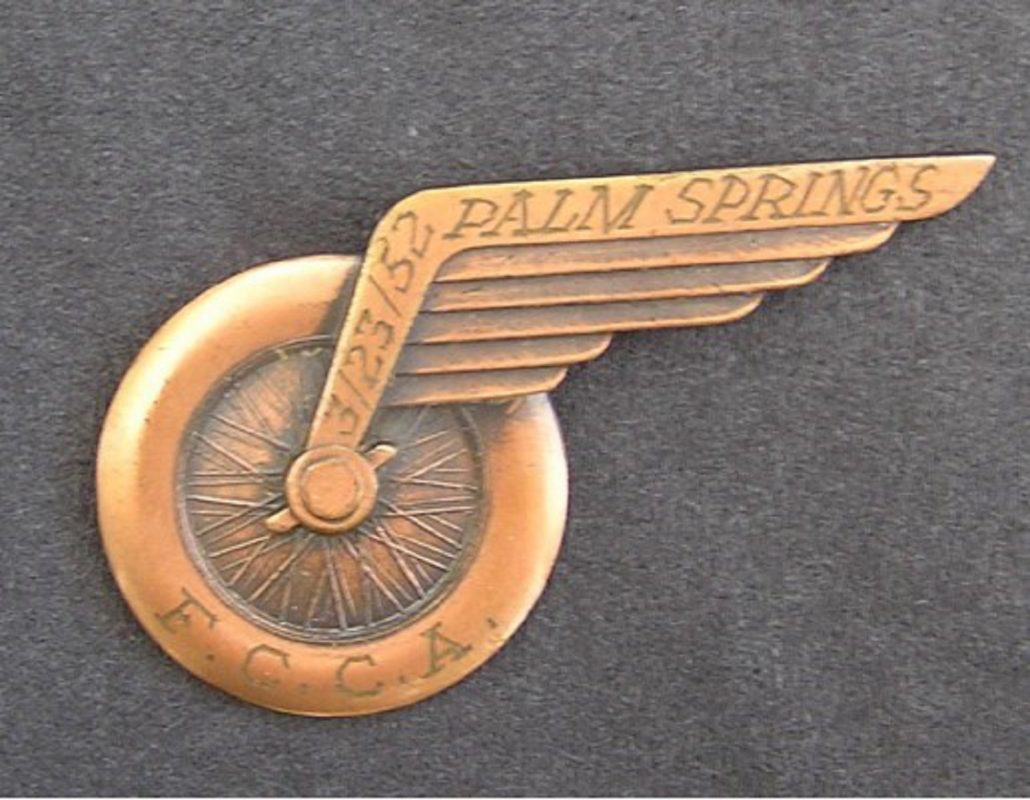 So I was thinking that my search for racing plaques of similar size and shapes was a dead end.  I did keep the other race car events in the back of my head, but the images above eliminated most of the races as possibilities.

Next I turned to the people that I knew were close to the car. None of them were able to remember what the heck it was despite the insane amount of minute details that they did remember.  Over 9 to 10 years of interviews gave me nothing.  Although one person pointed out his family history in the Mormon Church and the lead me looking into Mormon iconography.

My thought was that it was some sort of St. Christopher medallion or some Mormon equivalent.  I spent a lot of time looking into this and had many things that had me convinced that this was some sort of variation of these. I also have acquired and or viewed roughly a thousand images of the car over the many years on this project and could see nothing more that helped me out.

Those that know me well,  know that I have many search routines that I do multiple times a day looking for vintage sports car literature and assorted memorabilia. Its an obsession.  Almost all of my searches find nothing of interest but I get a hit every now and then, some of which I will share later on this site.

The Search Is Over – Or Is It?

Sometime in April of this year (2020) in one of my daily searches I found it!!! There was no doubt, all I had to see was the small image on eBay on my phone and knew exactly what it was. 12+ years of looking at this shield shape with a swoosh in the center of it had my eye trained. Opening the image on eBay sealed it.

Here it is shown below – a Palm Spring Road Races plaque.  It is not dated like most are but there is no doubt that my second theory proved out and like I said, it only makes sense right?  The timing of when it shows up and the undoubted pride he must of felt when he won that race outright makes it the obvious choice, but you don’t know what it is for sure until you know. 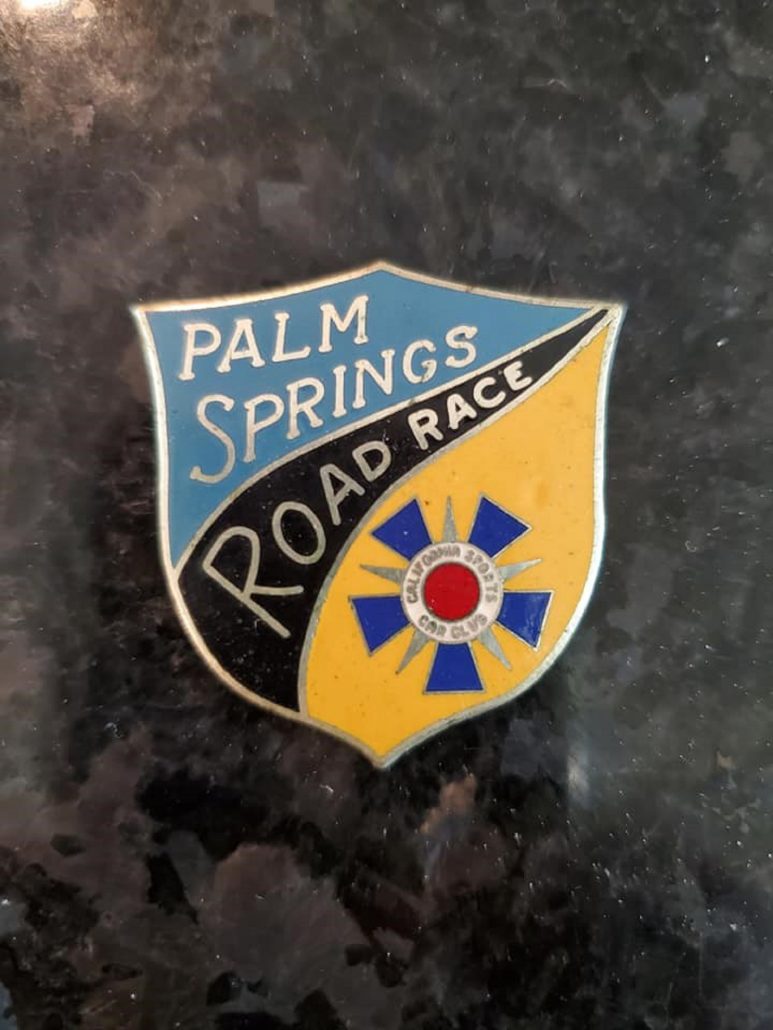 This is what waiting to get the details right is all about!  For me it is all about this sort of search – that’s what has kept me going on this project for so long.  As relived as I was to have finally found out what it was and being able to purchase it, I am a little bummed by the finality of it.  Sort of like being infatuated with that girl in high school and positioning yourself to finally talk to her and getting to courage to asking her out and then to finally date her and find out she wasn’t that interesting in the first place. The lead up to dating her was the best part because you don’t know what you don’t know.

Great thanks to Joel for sharing his story today – a story of dedication and perseverance – a tale of discovery and celebration – Congratulations Joel and thanks for sharing your story here.  For those of you who would like to read more stories that Joel has shared with us here at Undiscovered Classics, click on the link below.