Over the years I have learned about so many special people and special cars – in that order.  And this story is about both – Ralph Bush and his Singer race car.  How I got to know Ralph and become the caretaker of his car is a story by itself.  I’ll share a part of it now.

It all started with Glasspar – doesn’t it always 🙂  As I began researching Glasspar early on in 2007 I learned about an early car built by Bill Tritt for Vaughan Motors of New York City.  But this wasn’t an ordinary Glasspar.  It was a prototype or show car for the owner of Vaughan Motors, it was built on a modified Singer 4AD chassis, and it would debut at the International Motor Sports Show in March, 1952.  The Vaughan Glasspar-Singer is shown below at that show. 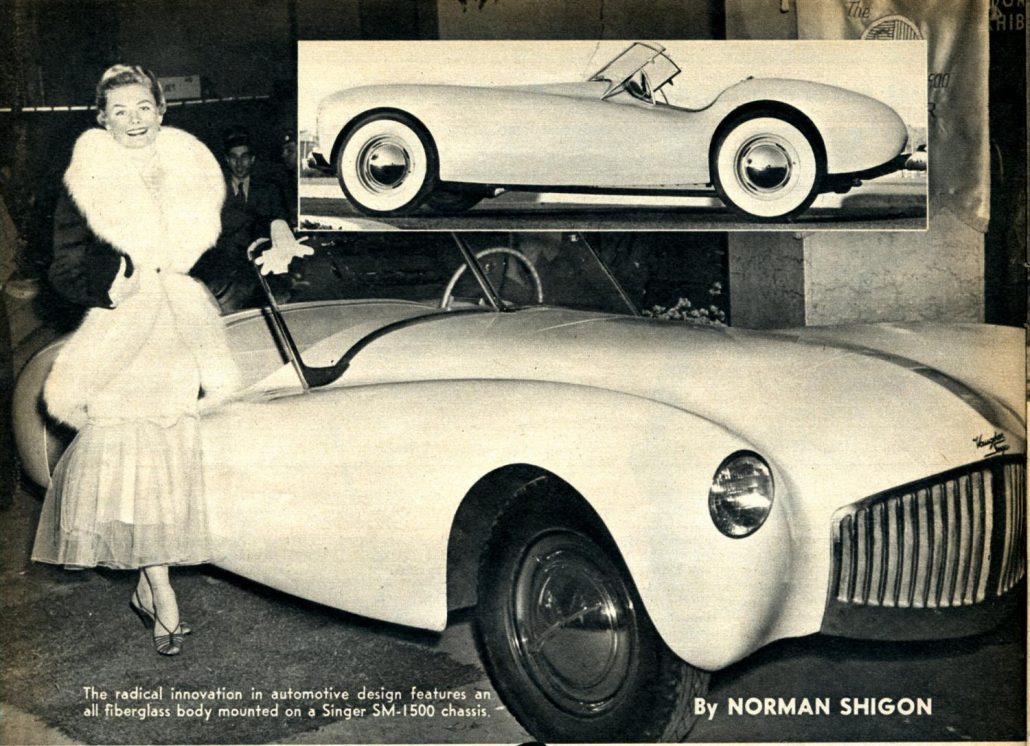 Now remember….Bill Tritt had just debuted the first Glasspar G2 sports car in November, 1951 at the Petersen Motorama in Los Angeles, California.  Now, four months later he’s built another car for its east coast introduction.  Impressive!  This means that the Vaughan-Glasspar G2 was one of the earliest Glasspar sports cars built – a worthy story in an of itself.

The Vaughan-Glasspar was built on a Singer chassis.  And over the next few years I found that other individuals and companies had rebodied Singers as well and built a selection of impressive sports and race cars.  You can read about a recent story I’ve written concerning American Special-Bodied Singers in the link below:

I learned more about the Singer marque via my new friends at the North American Singer Owner’s Club – Peter McKercher and Philip Avis.  And after a few more years of study and interest, Peter shared with me that I was now a recognized expert on North American Singer sports cars and race cars – with emphasis on the fiberglass bodied Singer Specials.  Pretty cool!

So I challenged Peter that if I’m “now one of the “historians,” that means I need to find a special Singer to study, learn about and appreciate in greater detail.  And then I asked Peter – “Please find me a special Singer to buy.”  And he did.  Today’s story is the result of my study, appreciation and friendship with my friends Peter McKercher and Ralph Bush.

We’re fortunate to have Ralph Bush with us today – 85 years old and going strong.  Let’s hear directly from Ralph about his memory of Singer race cars and in particular – his experience racing his own Singer. 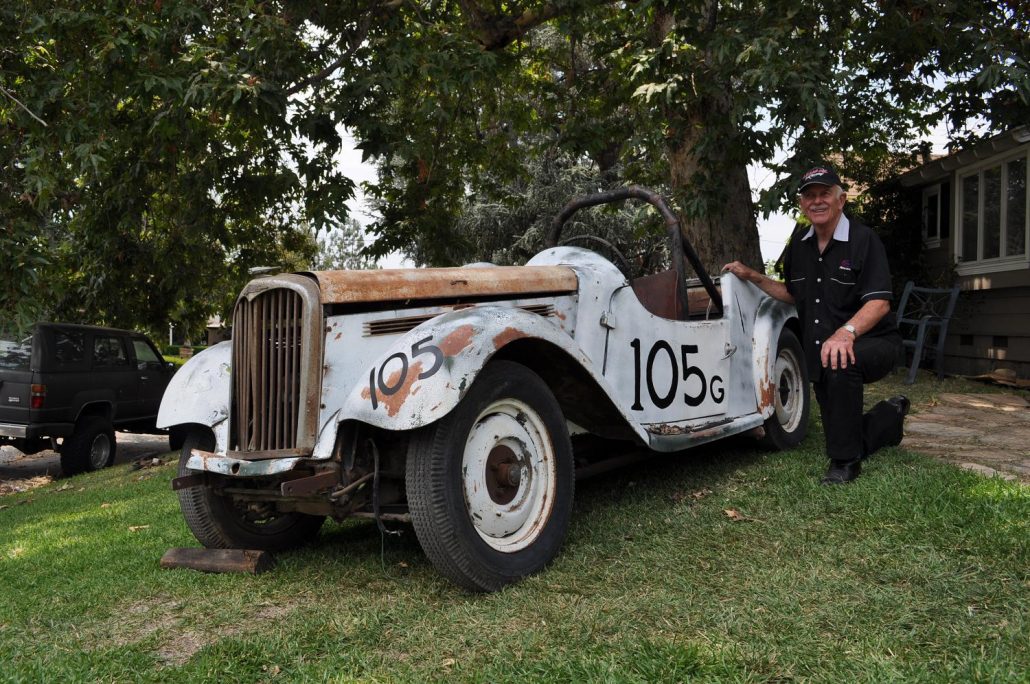 Ralph  Bush:  In  His  Own  Words
The  History  of  This  Car  From  The  Man  Who  Built  And  Raced  It
By Ralph Bush (as written and recorded by Peter McKercher)

Note: Ralph Bush, former President of the Singer Owners Club of America, raced Singers up until 1962, and provided his recollections on how his Singer 4AD performed against the competition. He also described the types of things that he and his fellow Club members did to prepare their cars for the track. The following account is presented in his words.

I was a member of the Singer Owners Club and we had many racing members, including Wilbur (Lammy) Lamoreaux, Jack and Cordy Milne, Dick Van Lannen, Johnny Martin, Peaches Crosby, Leon Miller, Johnny Moore, Robbie Robinette and Marvin Smith.  Lamoreaux and the Milne brothers were World Speedway Champions, with the former having been inducted into the Motorcycle Hall of Fame in 1998.  Lamoreaux and Milne were authorized Singer dealers in Glendale and the Milne Brothers were dealers in Pasadena. Peaches Crosby was married to Bing Crosby’s nephew.

The other clubs considered the SOC to always have the fastest and hairiest events in the California Sports Car
Council, as we were mainly a club centered around racing.  I raced my Singer at various events here on the West Coast. It ran at Willow Springs, Taft, Las Vegas, Irwindale, Santa Barbara, Paramount Ranch, Riverside and Pomona amongst others. I could fling that little screamer around pretty well, but those hydro-mechanical brakes were a joke. 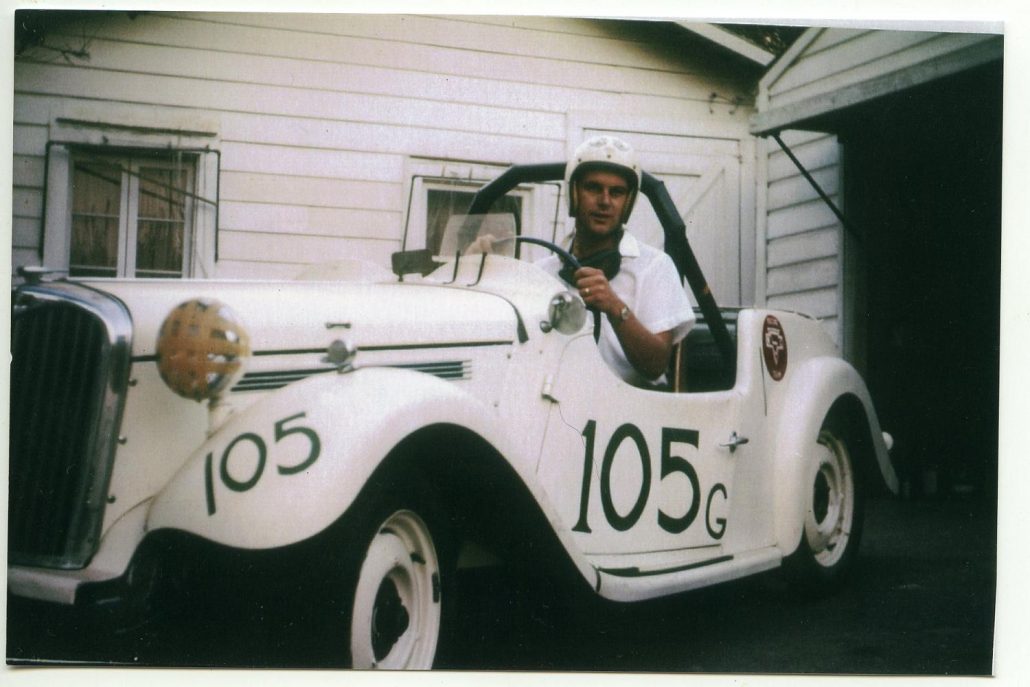 My car would out handle most of the cars in its class, if I put very heavy weight oil in the shock dampers. I remember going through turn 5 at Pomona in a full 4 wheel drift, when an Alfa in front of me went off the course and knocked a hay bale onto the track into my path. Even though I was in a drift, I was able to steer around it.

One of the big weaknesses of these cars was brake fade. You would pull into the pits after a race and the drums would be glowing bright red. Riverside in particular was a problem, coming off the long back straight, the brakes would fade going into turn 9.

The brake fluid also had a tendency to boil under racing conditions. In an effort to prevent this, I fabricated some scoops from a couple of tin cans to duct air to the drums. However, the scrutineers had me remove them since they weren’t stock items. I also added a chrome scoop to the side of the bonnet to direct cooler air to the master cylinder. This seemed to help and the scrutineers left it alone as it looked like it was a stock factory item. 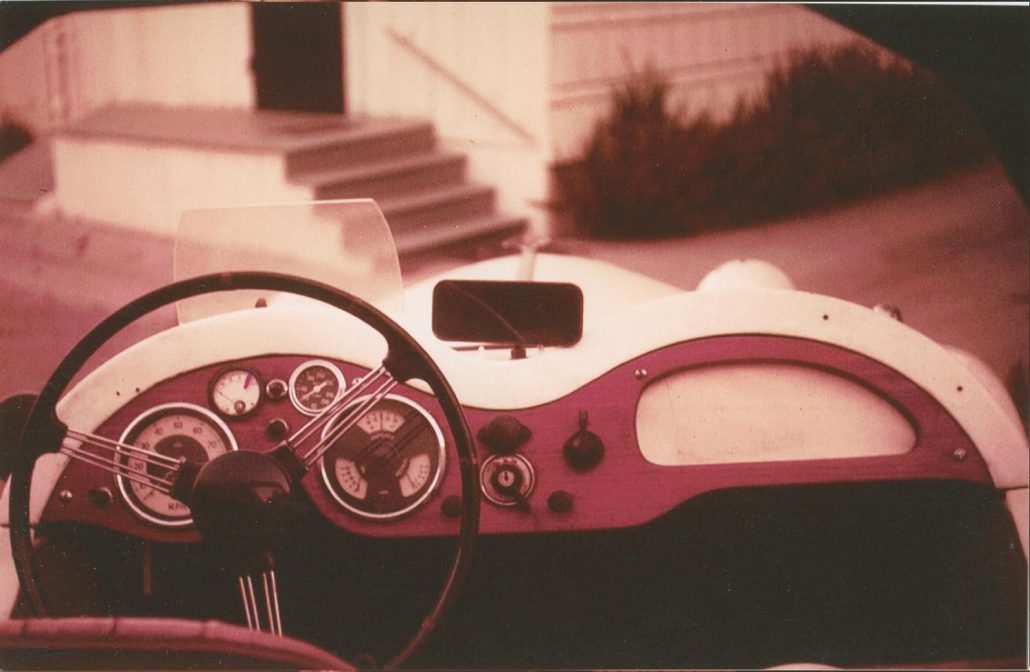 As I remembered it, the Singer could blow the doors off the MG TDs and TCs. They were lighter, with their aluminum bodies and they had a larger engine, with an overhead cam, which allowed for higher revving.  Singer’s worm and nut steering system was of course not as good as the MG rack and pinion, which was more precise and ultimately allowed for better handling.

The MG’s had a very low gearbox ratio in first. It was good for stump pulling and only about 5 miles per hour, so when staged at the starting grid against the Singers, the MG’s were at a real disadvantage. To overcome this, they had their pit crews wet down the rear tires so they could get some tire spin while starting in 2nd gear. The gearbox on the Singer was much better in general than the MG TC’s and TD’s, in which you could easily beat the synchromesh. 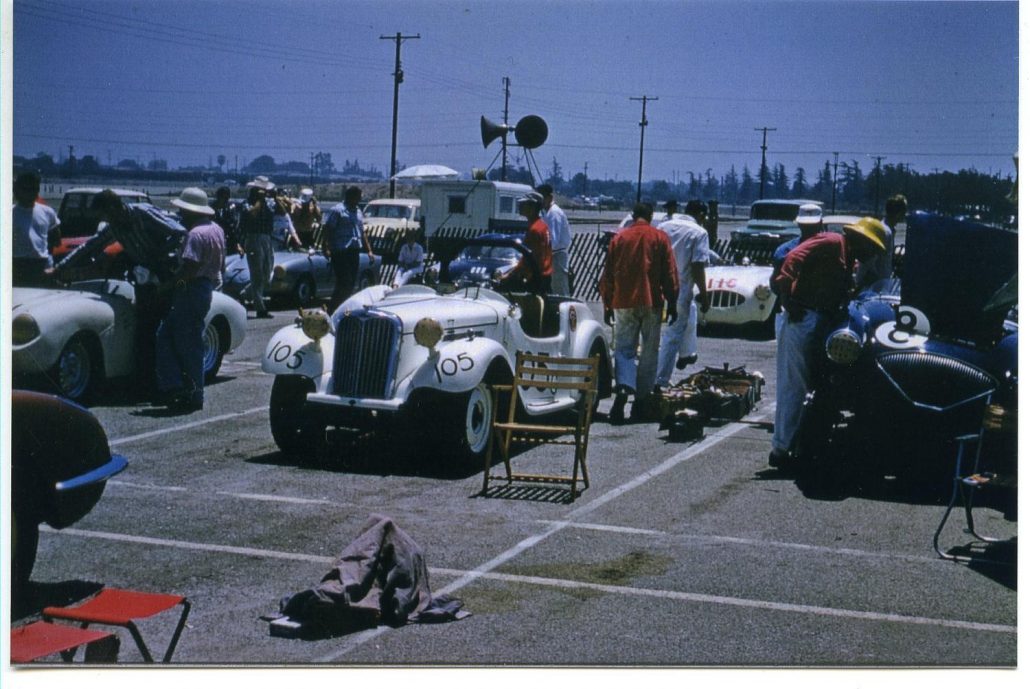 For those of us who raced the Singer, we found that the shift was a little long and too far forward. I bought a $25.00 short throw after market shifter from fellow racer John Martin (Parts Manager at Vaughan Singer Motors). This required removal of the original shifting lever so the new one could be clamped onto the gearbox and screwed to the drive shaft tunnel.

The replacement had a very short throw lever with a couple of heim joints (A heim joint is essentially a rod end that looks a lot like a ball bearing with a shaft passing through the hole allowing the bearing to swivel in infinite directions). If I remember correctly it left the gear change lever at your right hand in about the same location as on the Jaguar XK120. It was a great improvement.

The shifter gave occasional trouble when slamming it into 1st gear and jamming in place. The simple fix was to take the top off and find which bolt from the outside would stop the extra movement. You then replaced it with a longer bolt. 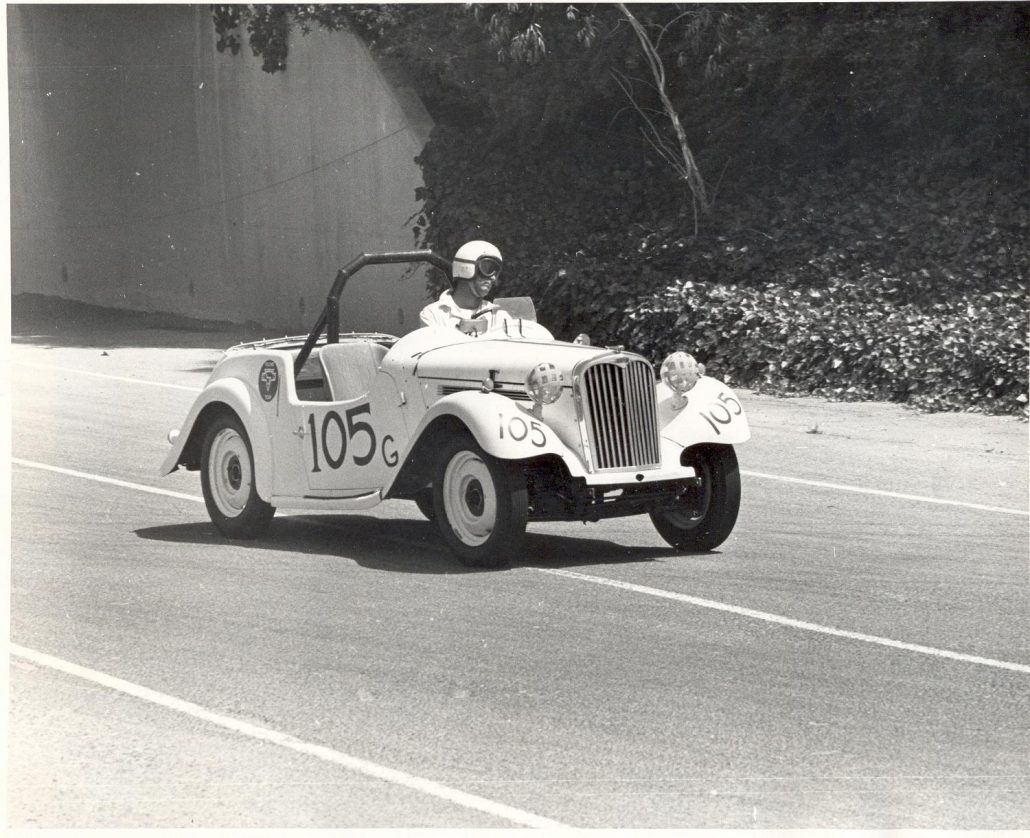 To prepare my Singer for racing, I installed mandated wheel plates to add strength to the wheel centers. These were steel discs about 1/4″ thick, fitted over the hub and bolted on with the existing lug nuts. Without these, the Singer wheels tended to tear out at the hub when pressed hard on the track.

I installed a roll bar, which added much to making the car more rigid. I also installed a war surplus seat belt from an Army airplane.  The interior was gutted, except for the seats, and holes drilled in everything that would not detract from the strength to lighten all of it. I even removed the glove box to capture every ounce of excess weight. Lateral stability and handling was improved by using very heavy oil in the shocks.

It had a dual port head with Solex carbs, which allowed me to jet and re-jet as required. I milled 3/32″ off the head and installed larger valves. With a little grinder, I ported the head and installed an Iskendarian cam with stronger valve springs. Everything was balanced, of course. It had a tuned exhaust with a split exhaust manifold. I cast an aluminum cover for the Salisbury rear end, as I was unable to locate the original one. 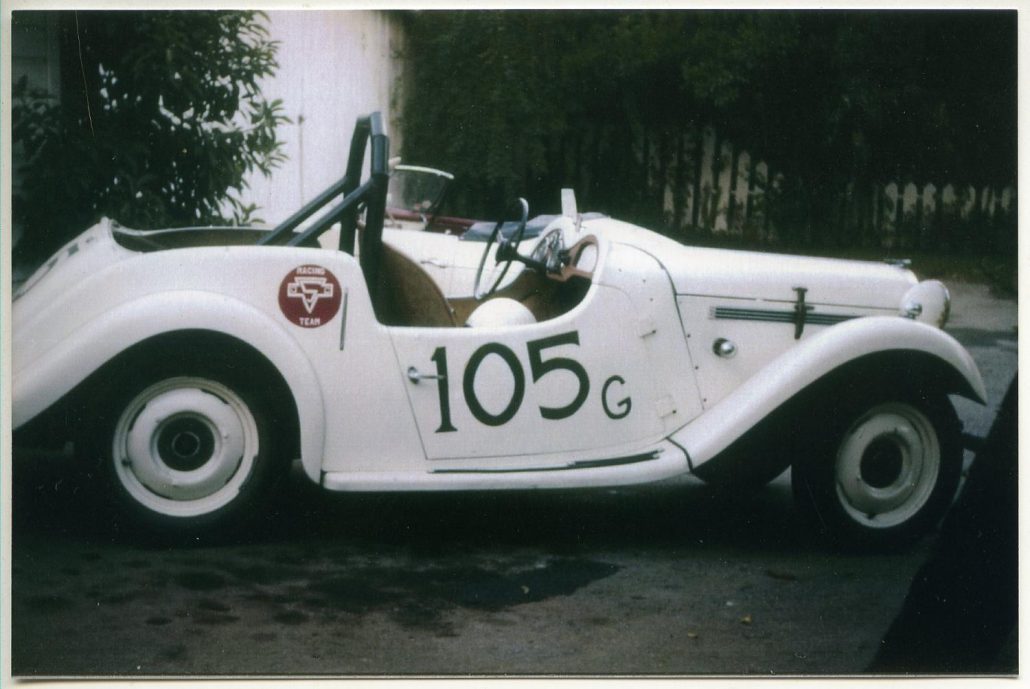 On the dash, I added a small tach with a visible red line and a big oil pressure gauge. I also installed a large kill switch in the event of a major shunt.  Most of the cars driven were pretty much stock, with the exception of some of the modifications outlined above. A couple of notable exceptions were the Lamoreaux car and Dick Van Laanen’s Special.

The Lamoreaux car, unbeknownst to most, had been bored and stroked to develop about 80 horsepower, which was about a 40% power boost over the other Roadsters. Lammy also added an extra thick stabilizing bar to improve cornering.

Modifications to Dick van Laanen’s car were a little less subtle as he prepared an out and out Competition Special. It had a glass body reminiscent of a C-Type Jag and a Roadster engine, which was fully balanced, milled and ported to accept four Amal motorcycle carburetors. Ken Miles, the MG king in Southern California, was heard to say “if they ever get that Singer Special sorted out I’ll be in trouble”. 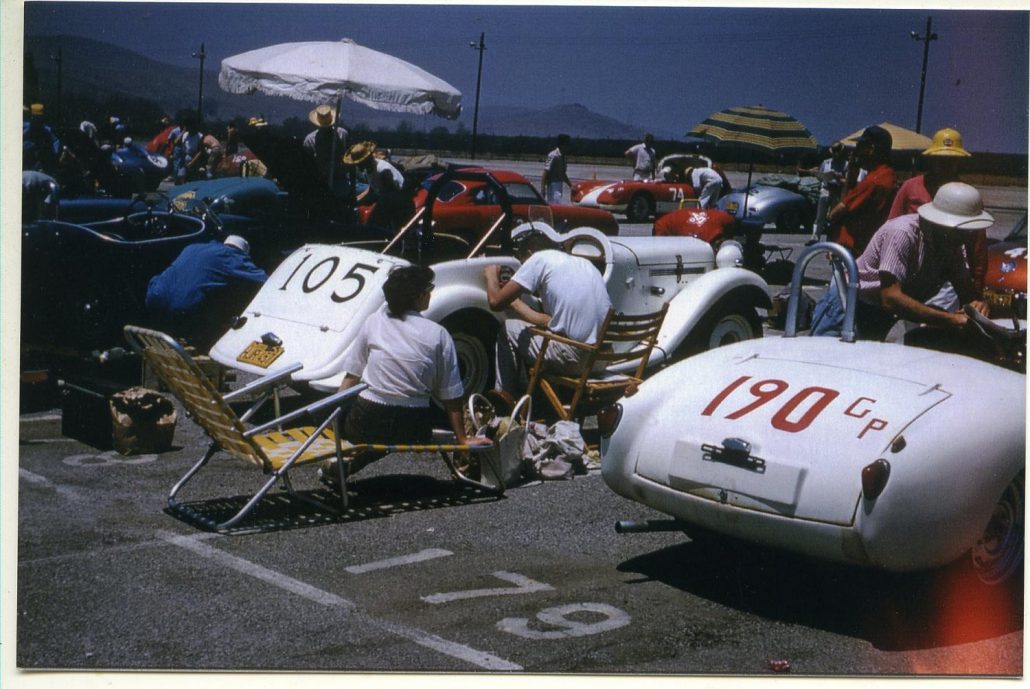 As noted above, the SOC was well reputed amongst the other car clubs in California. From its inception in 1952, SOC events were always well attended, and by some of the best known race drivers in Southern California. Even Lee Marvin, the actor, was a member and competed in SOC sponsored hillclimbs in the early days. At its peak, the Club had about 40 members, but by 1962, there were just no Singers left as daily drivers.

To bolster membership, the Club opened itself to other marques and wrestled with a name change to accommodate them. Unfortunately, it was for naught and the Club folded its tent with only a mimeograph and a 48 cup coffee maker to its name.

Two-Part Interview with Ralph Bush and His Race Car:  2013

Back in 2013, we reunited Ralph Bush with his recently “found” race car before shipping it from California to Tampa, Florida.  Below is the 2-part interview with Ralph Bush:

The Ralph Bush Singer race car is tucked safely away here in Tampa, Florida awaiting a future restoration – sooner, I hope, than later.  In the meantime, those of you wanting to learn more about Ralph Bush, his race car and racing experience, click on the link below:

And those of you who are now intrigued enough to learn more about Singers and their sports car and race car history in North America, click on the link below: