There’s a beautiful Glasspar G2 sports car for sale right now in Germany – and it’s one that I’ve been tracking for 10+ years.  I first learned about this G2 from the Hoover family.  Bill Hoover was an original builder and owner of a Glasspar G2 and maintained a registry for quite some time.  Sadly Bill passed away, but I learned much about Bill and his life from his wife Carolyn and his son Pat.  Much of what I learned about this sports car came from their registry.

The Glasspar serial number is G2 53 155 and is shown below.  From research Rodney Packwood did, this reveals itself as the body being built in 1953 and car #155.  Serial numbers for cars ranged between 100 and 199 so this puts the body as being built in the middle of the pack – and 1953 would be right for this production number. 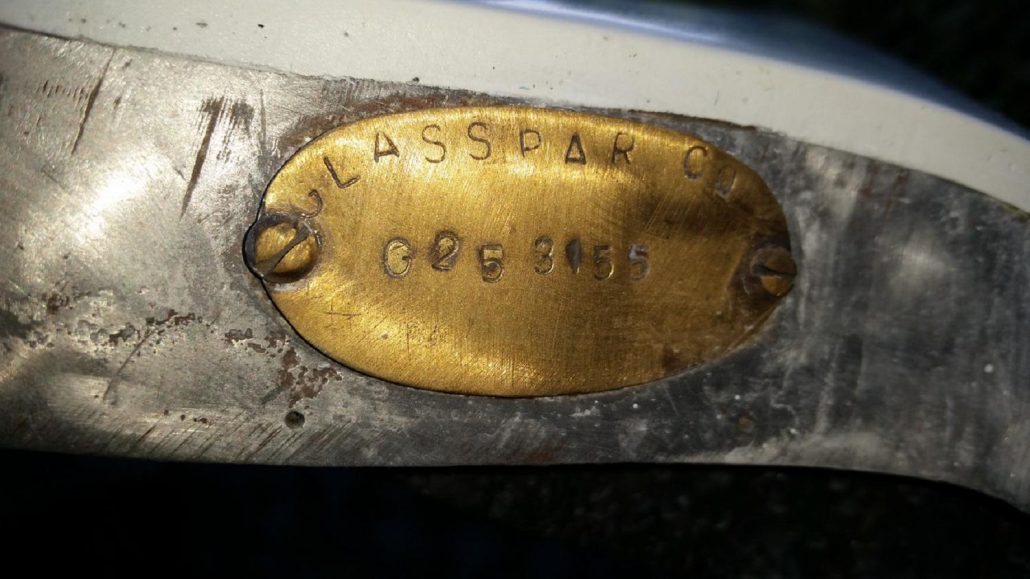 When I first became acquainted with the car, it was owned by Joe Hatcher in West Virginia.  Joe had acquired the car via an ebay auction in 2003 from Arthur Bump of Boston, Massachusetts.  The Glasspar came with a Jaguar engine in it and it would have been quite a sight had the car been restored with it.  But Joe didn’t get to finish the car and it was sold at an estate auction to a friend and super car guy – Elliott Baumgardner of Atlanta, Georgia in the summer of 2013.

Elliott did a beautiful restoration on the car and spared no effort.  He took the body off the frame and disassembled all the components.  And that’s the best way to restore these cars.  After 60 years or so, body mounts that were hand assembled and built tend to fail.  The best way assure the car is the best it can be when restored is do it all – from soup to nuts.  And Elliott did exactly that.  Below you can see the completed chassis – nicely done and ready for the body to be mated. 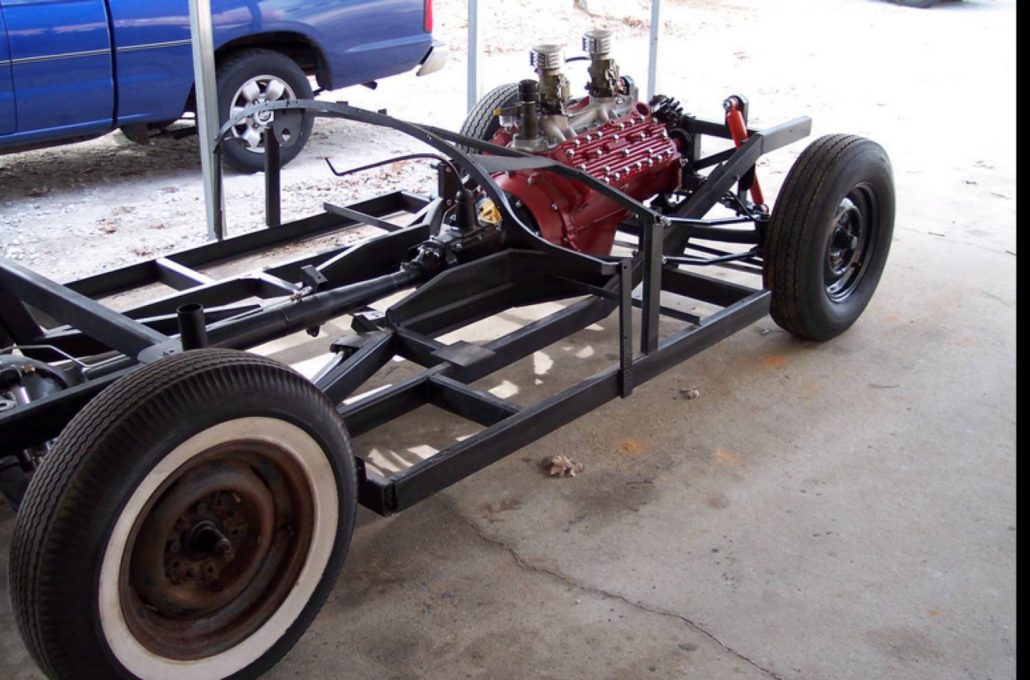 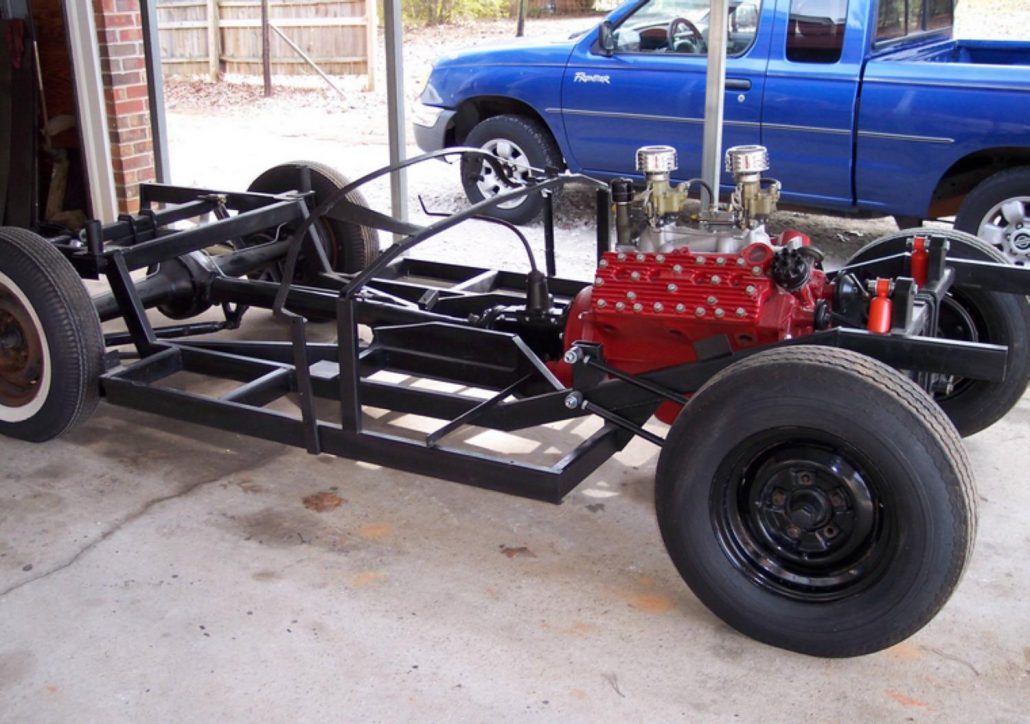 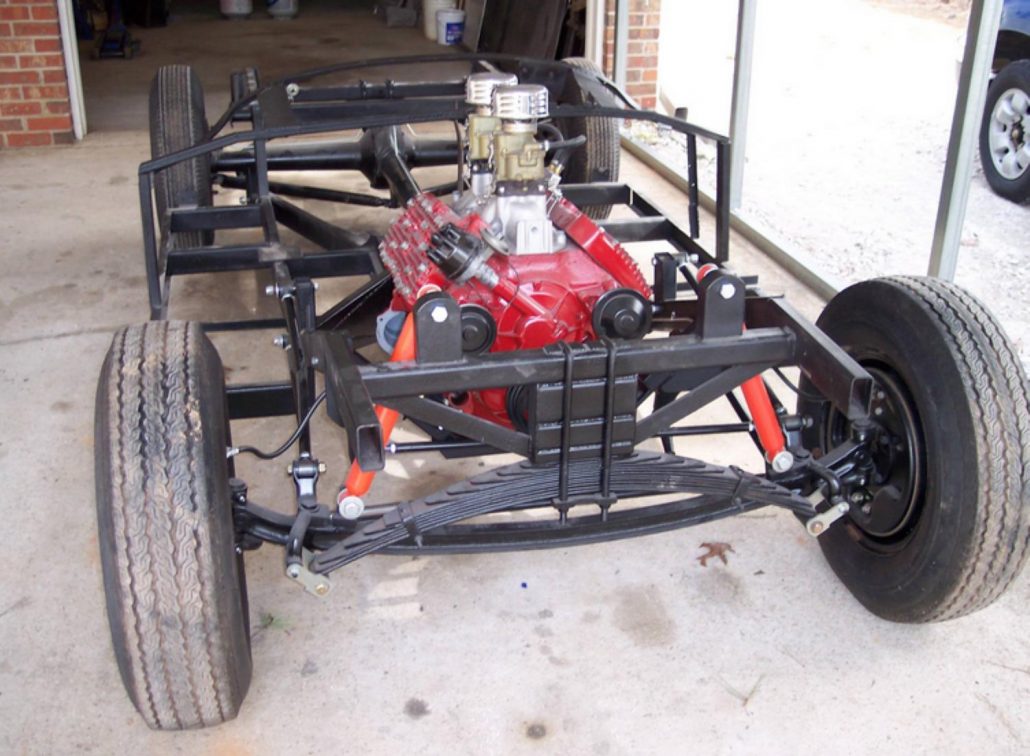 I’ve always liked the grille on this car – probably because it gives a different look than a typical Glasspar G2.  Bill Tritt produced two front end variations of the G2 – one that we have all seen and one with the Nash grille.  When a Glasspar G2 was in a wreck, it would make sense that the body shop would have to either fix the grille or create a new front end – that’s what most likely happened to this car and the final result is very nice.  The oldest photo of the car comes from the Frank Cornell collection and it’s most likely from the 1980s – beyond this its unknown when the front end configuration was changed. 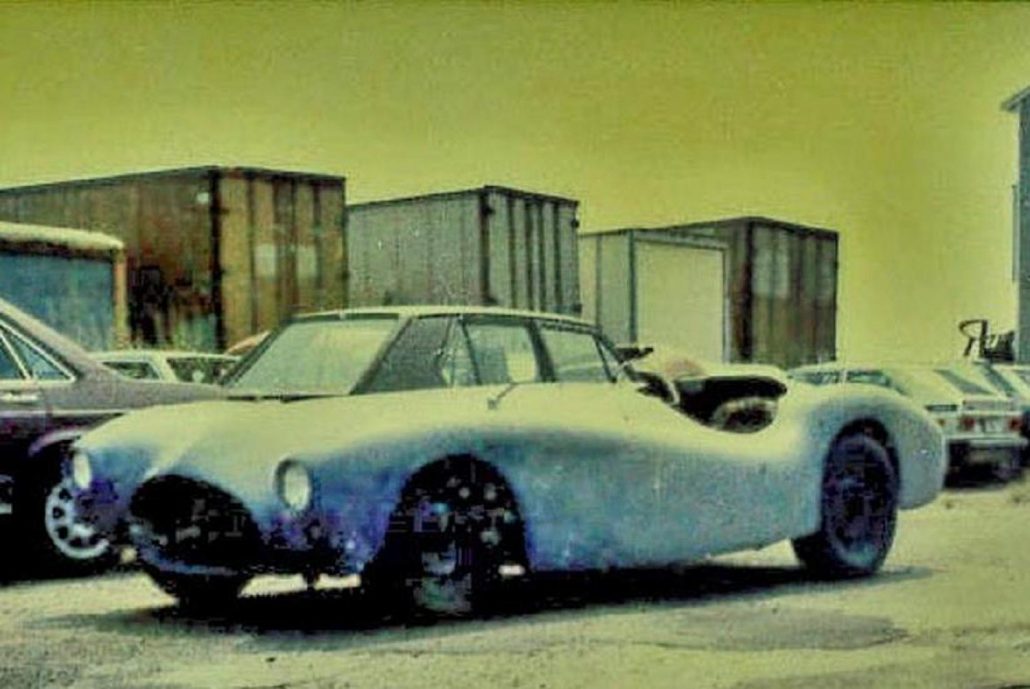 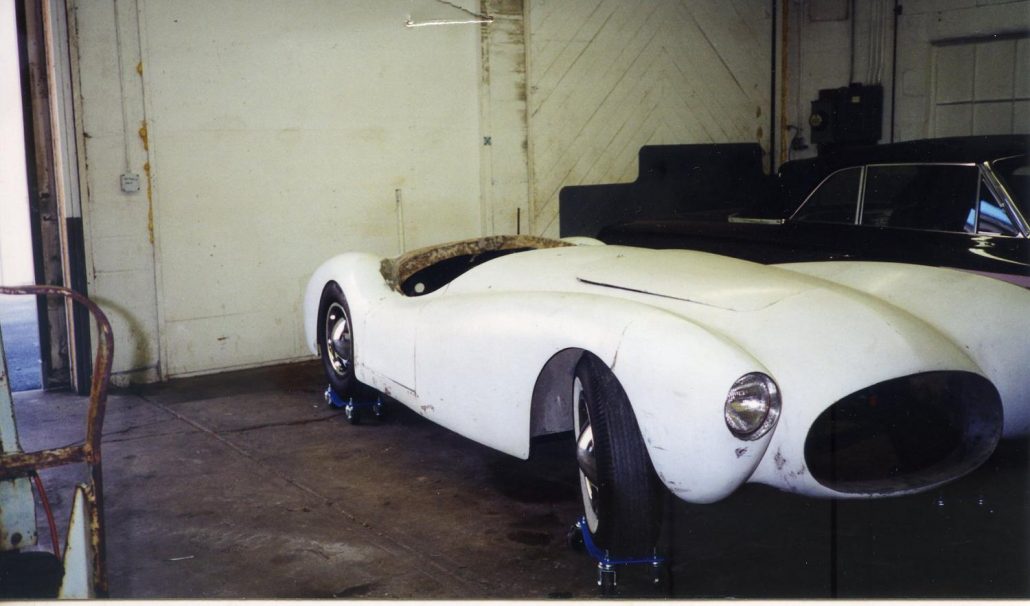 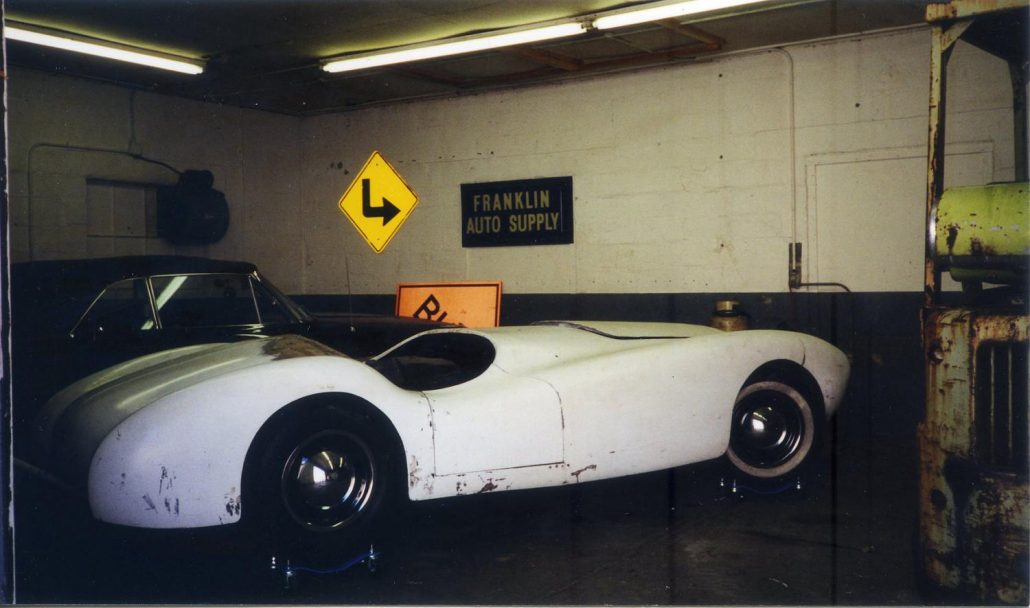 Elliott finished the restoration in the summer of 2016 and the Glasspar looked great.  Back then he shared with me his backstory on the car and its restoration:

Let me tell you my story of the Glasspar…

I’ve been interested in fiberglass American specials since I was in high school and used to go to the early Walter Mitty road races at Road Atlanta.  Back then, it was a “race what you brung” type event with many street cars, cars without rollbars or fire protection, etc.  I remember a Devin race car from this period and when I saw one for sale in the local paper on a Jaguar XK120 chassis for $300 my interest was piqued.  However, as a 16 year old, though I may have had $300 in the bank I didn’t have the know-how to restore a car from scratch.

Fast forward 30 or so years and I’ve had lots of sports, classic, and even fiberglass cars.  I saw an ad for an estate sale and called the auctioneer who let me phone bid.  I was the winning bidder on a Glasspar G2.  I found a transporter close by and they delivered the car.  When it arrived I was sad to see that they had failed to secure the hood and it was long gone.  I stripped the body off the chassis and set to work on building a car.  Media blasted the frame, took apart and rebuilt the suspension and rear end and early Ford torque tube.

The brakes and drivetrain were all early Ford components.  Solid front axle.  Interestingly, the passenger rear axle was offset just an inch or so, an common early racing practice to compensate for the weight of the driver.  I could tell that the chassis was built in period by the style of stick welding.  I would be interested in anyone’s input or opinion on the chassis-it looks like somewhere in between a Mameco and Shorty.  I didn’t find any stamped numbers on the chassis.  There was no engine or transmission with the car.  The engine mounts, which looked somewhat more recent, were set up for a Ford flathead.

Since this car was obviously Ford powered at one time I decided to go with a built Ford flathead V8.  It wasn’t until later that I found out that the Glasspar once had a Jaguar xk120 engine with the rare and costly competition C head.  It’s funny, at the same time as I was working on the Glasspar, I was also rebuilding a race engine for a Jaguar XK120.

We put together a 1952 Ford flathead 239 cubic inch engine with Edmunds aluminum heads, dual carbs, headers, and other high performance parts.  A stock 3 speed Ford era correct transmission was sourced and rebuilt with all the correct components to tie into the torque tube rear.  Brake lines were run, a custom radiator was made, era correct wooden floorboards were fabricated, an aluminum firewall was constructed, and eventually we had a running chassis.

The son of a friend of mine who had a lot of experience with boat repair and painting was contracted to do the body work.  I couldn’t decide whether to go back to the stock look or to restore the body as it stood.   Close examination of the body shows that the original Glasspar front end of the body is still underneath the later modified fiberglass.  At first glance,  one may think that it was a typical 60s era car that was “Cobraized” but when one looks at the fender extensions and how they flow, it appears that the car was late 1950s “Ferrari-ied”

The front end of my car most resembles a 1958 Ferrari 250TR with the pontoon fenders.  I wonder if this custom work was done as the same time as when the Jaguar C type engine was installed??  Either way, if there was competition history at this time I’m glad I didn’t remove it by returning the car to stock.

My car had a very nicely constructed aluminum grill surround but was missing the center bars.  I had a center “eggcrate” grill fabricated.  The Glasspar required quite a bit of body work.  I chose to paint the car in the color I found it…Olde English White.  The final paint turned out to be more of a drivers quality rather than Amelia concourse quality paint but I decided to go ahead and finish building the car and enjoy it and if desired, I could later paint it again for show.

Although at one time this car had a Jaguar motor that nicely fit under the hood, the way the chassis was set up for a Ford flathead, some kind of scoop would be necessary to clear the carbs.  Keeping in theme with the late 50’s Ferrari, Maserati, and other race cars, I decided to go with a clear plexiglass scoop with an aluminum surround.  Brass velocity stacks over the Stromberg 97 carbs really set it off!

When I got the car it had no dash so I fabricated a dash in the style of a stock dash but in engine turned aluminum.  I continued the theme of using all era correct components and used fully restored curved glass Stewart Warner gauges from the 1950s.  A vintage removable NOS Bell sprint car steering wheel sets off the dash.  Vintage style brown leather bucket seats finish off the interior.

The Glasspar sounds like a real hot rod.  I ran straight pipes off the headers to the rear.  It sounds awesome!  The car drives like a real hot rod sports car.  There are a few minor details that need to be sorted such as hooking up the mechanical speedometer and tach (all other gauges are wired up), rebuilding the tailights, and maybe a couple other doodads but…this car has been brought back to life!

Let’s check out some photos of when Elliott completed the restoration and kudos to him for such an excellent job: 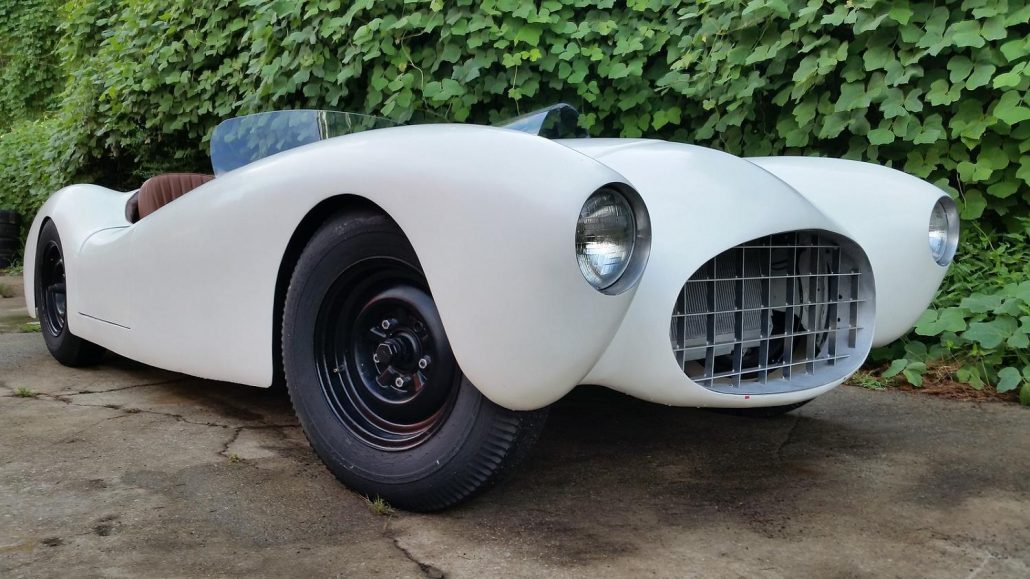 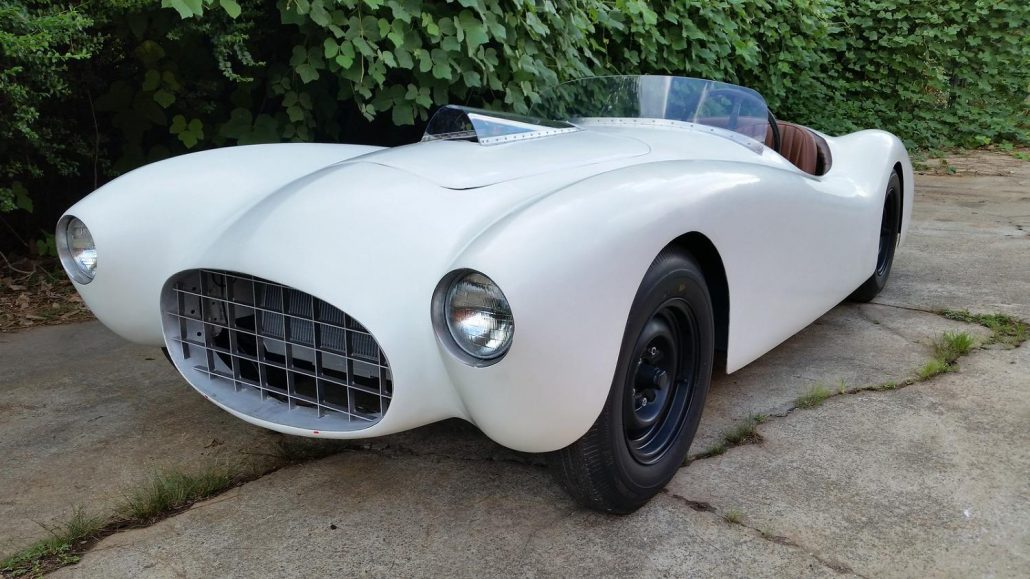 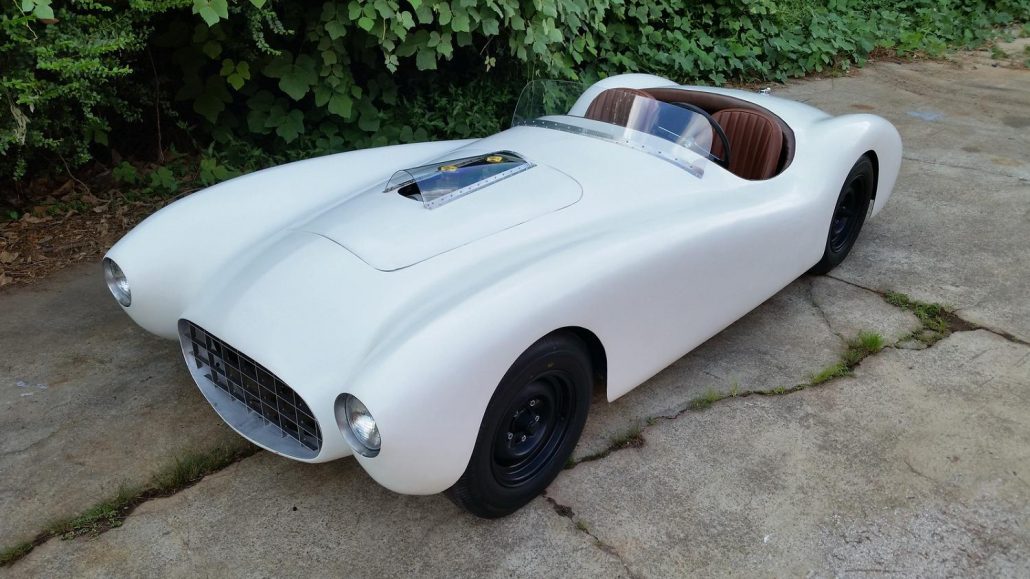 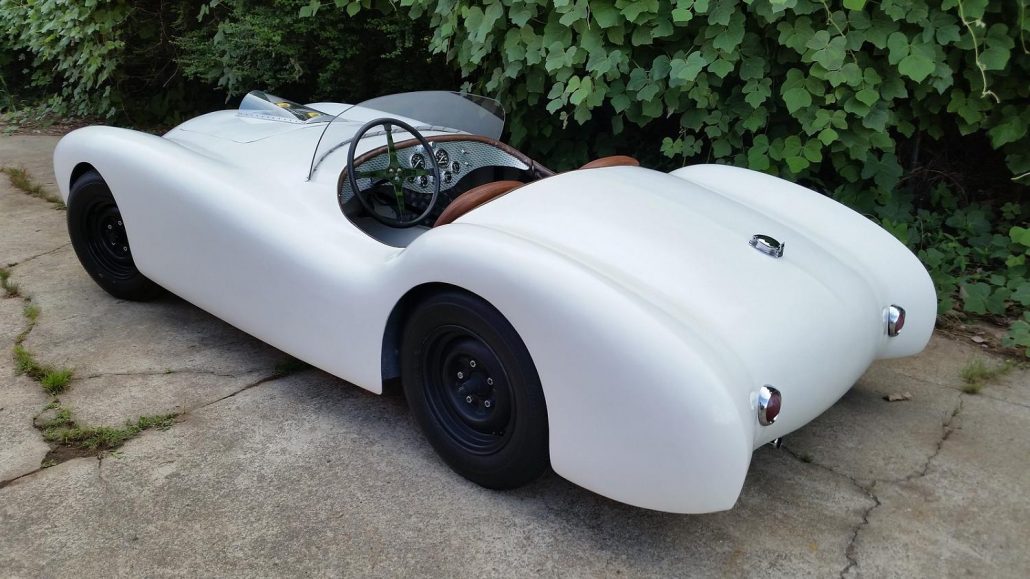 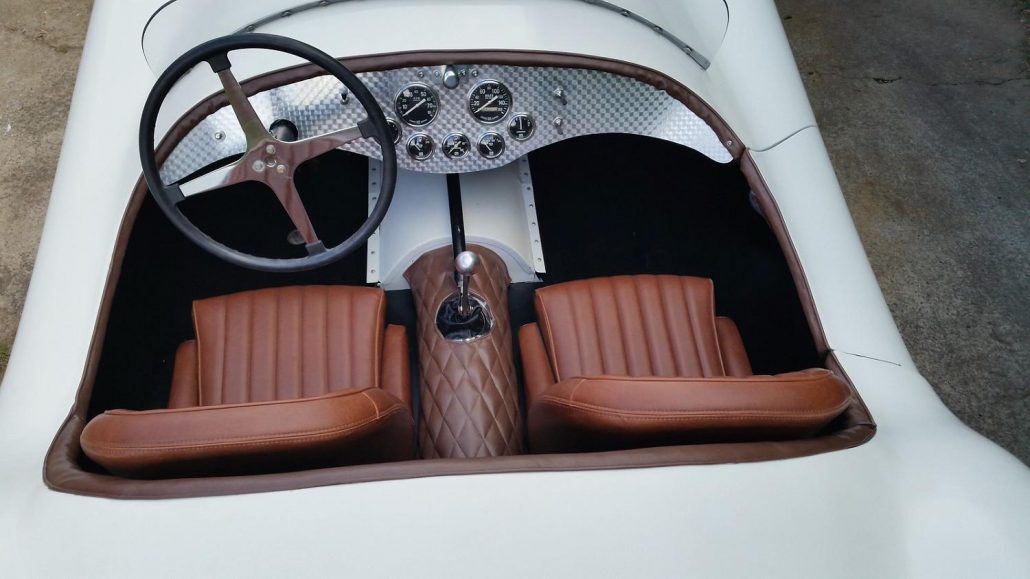 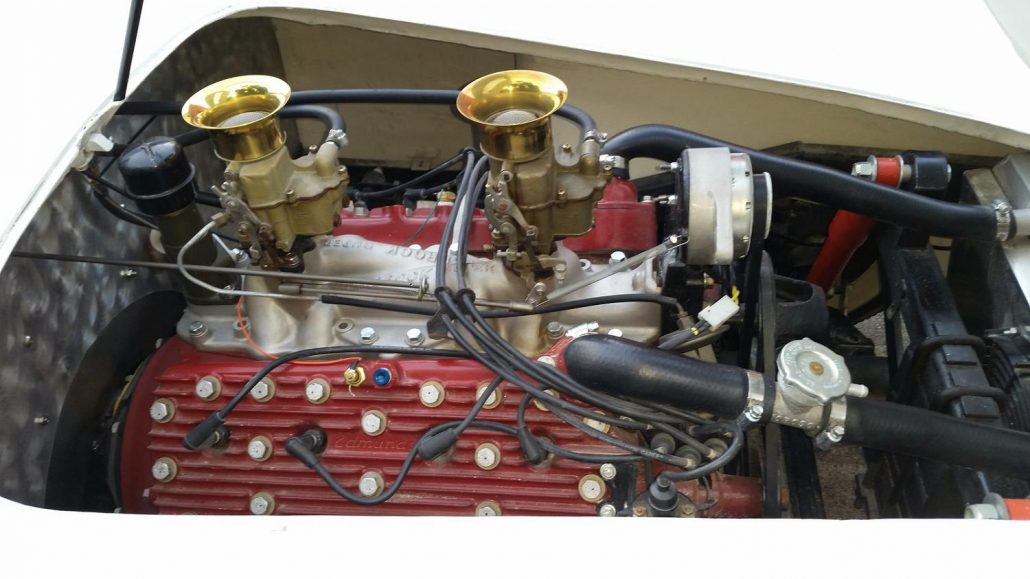 Life can get in the way of plans and this is what happened to Elliott – in a good way.  Elliott and his wife had welcomed a new arrival into their home – their son Vincent – in the fall of 2015, and by early 2017 it was time to find a new home for his beloved Glasspar.  And what a home it found in one of our own Undiscovered Classics aficionados – Andreas Graf of Germany.

Andreas bought the restored car and shipped it to his home in Germany.  By my count, there are at least 5 Glasspar G2 sports cars in Europe – three restored and two unrestored that we know of.  But Andreas, as with most enthusiastic new owners, took possession of his new Glasspar and did even more work.  Recently he shared the following with me:

I had the engine overhauled in 2019 as well as the gearbox.  I brought in new seats, installed new wiring and added a handbrake which was needed for the German registration.  I also have upgraded the tires, replaced the rims with new wheels, installed a new ignition – spark plugs and cables were installed just last week.  I’ve also had the carburetors rebuilt too. 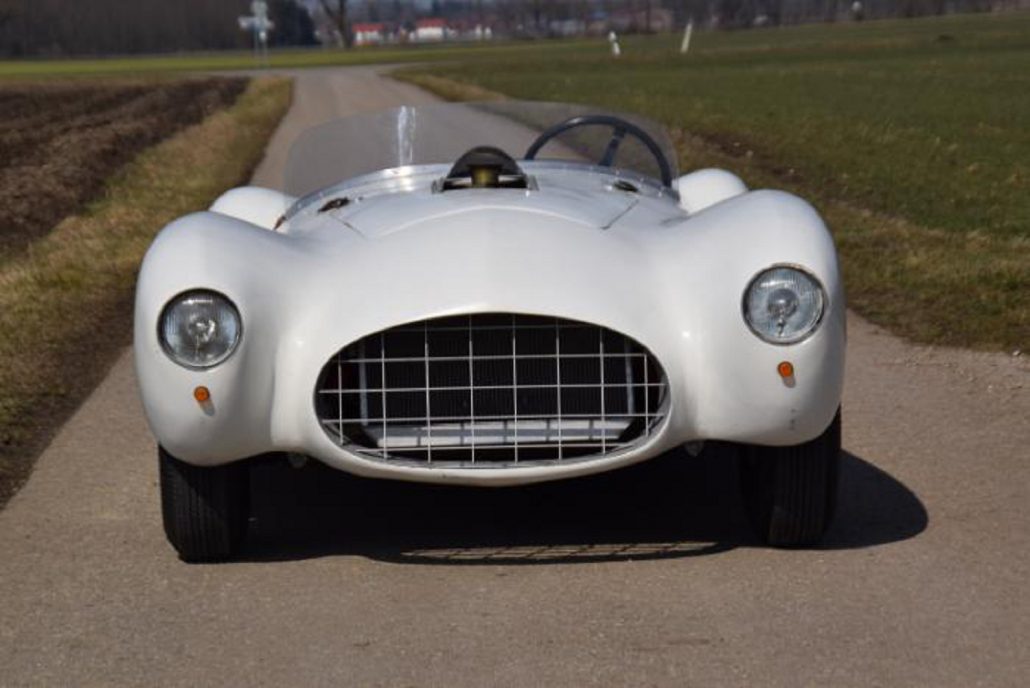 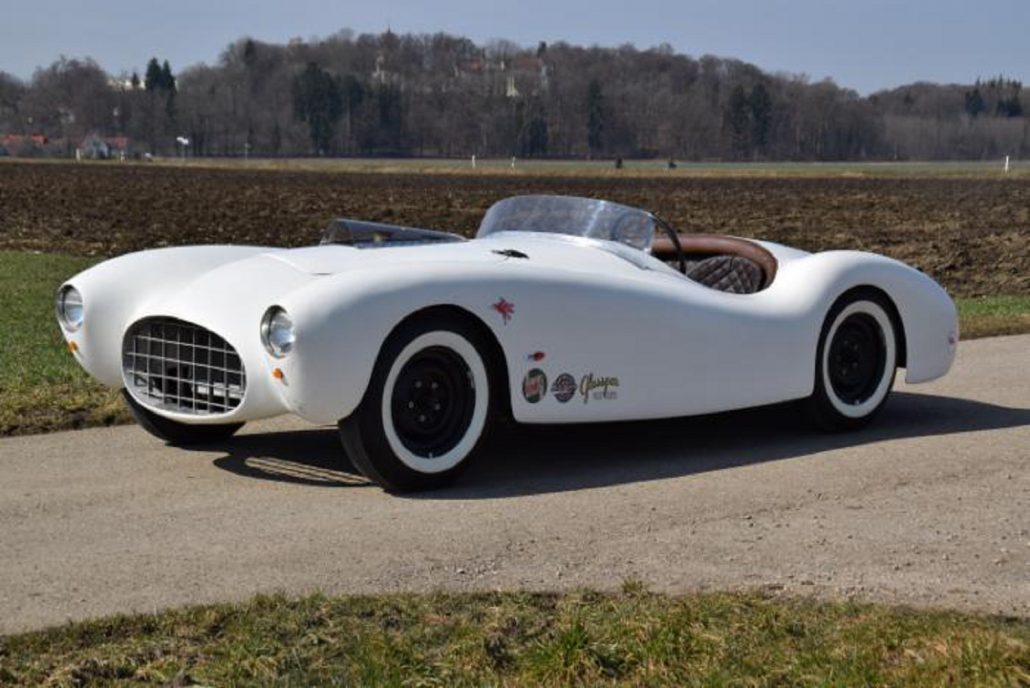 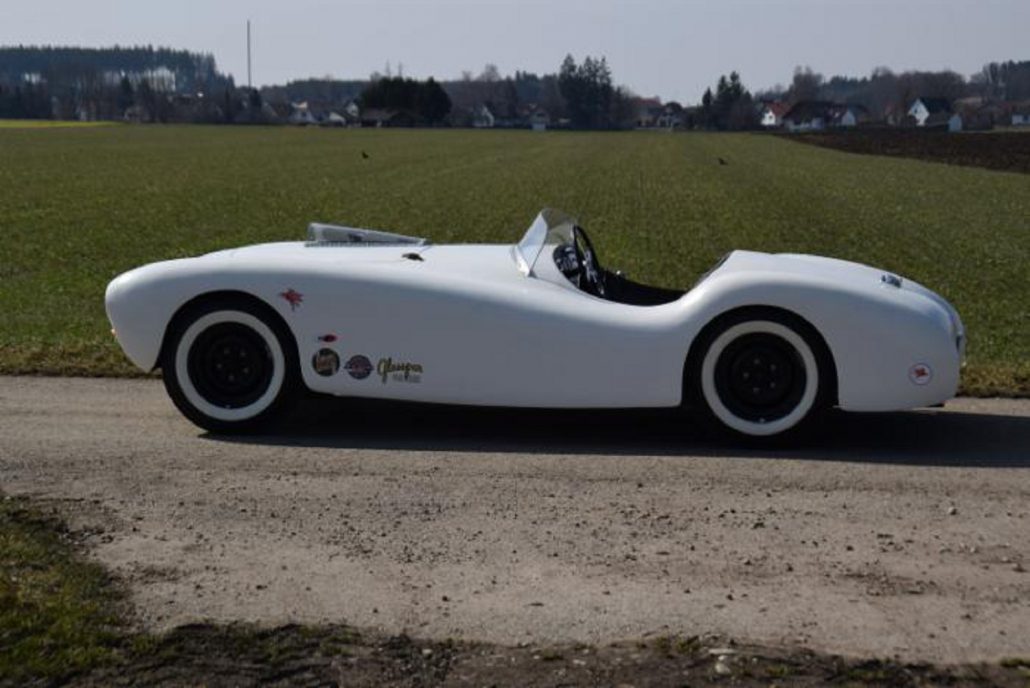 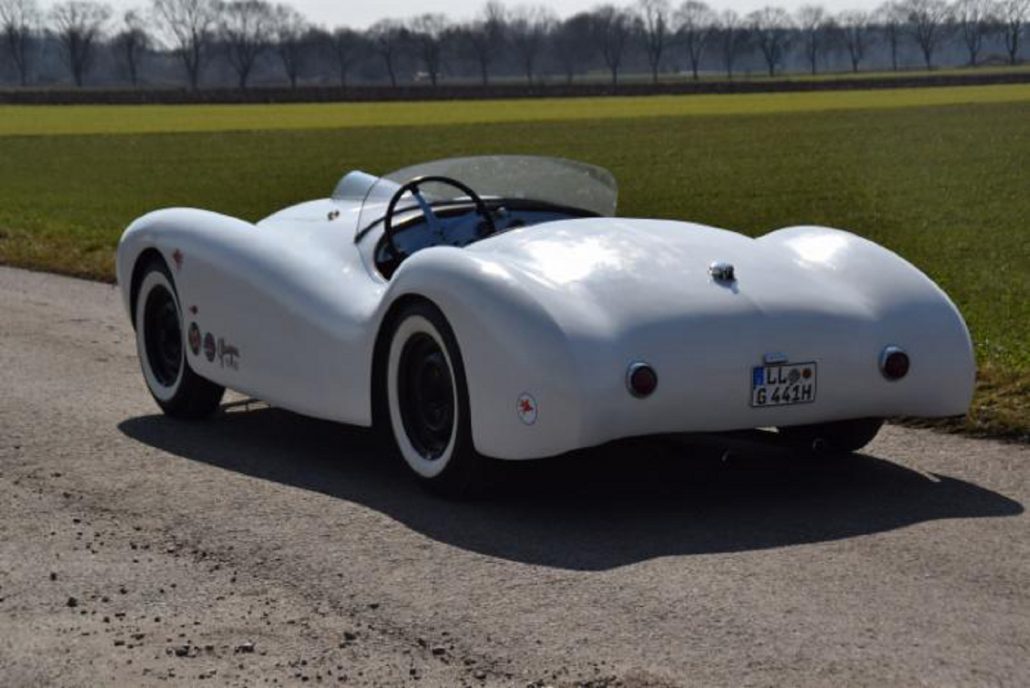 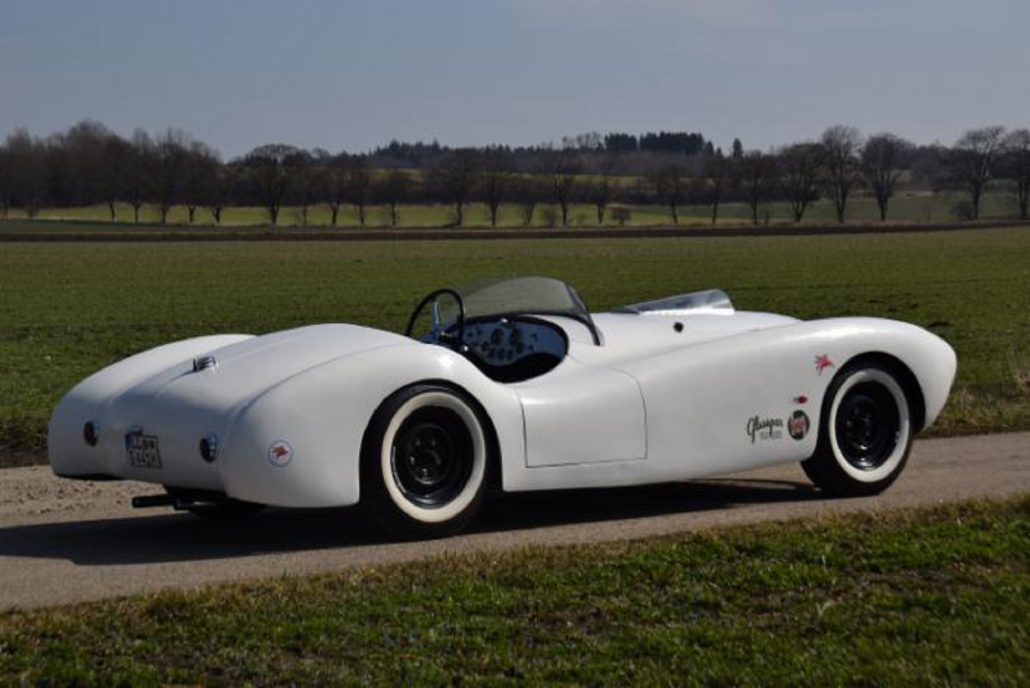 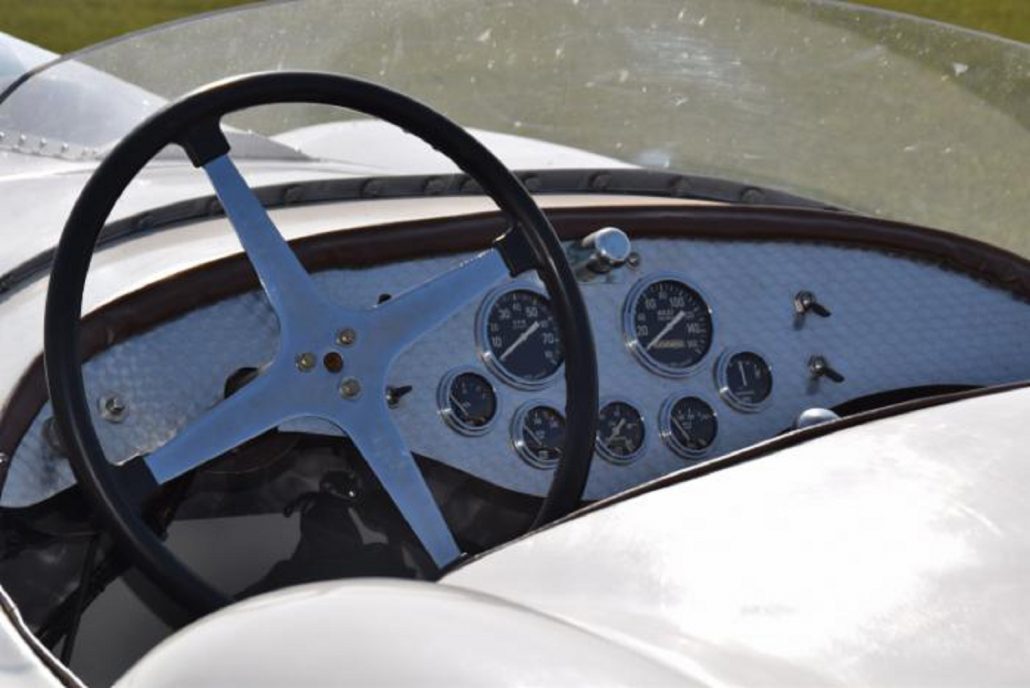 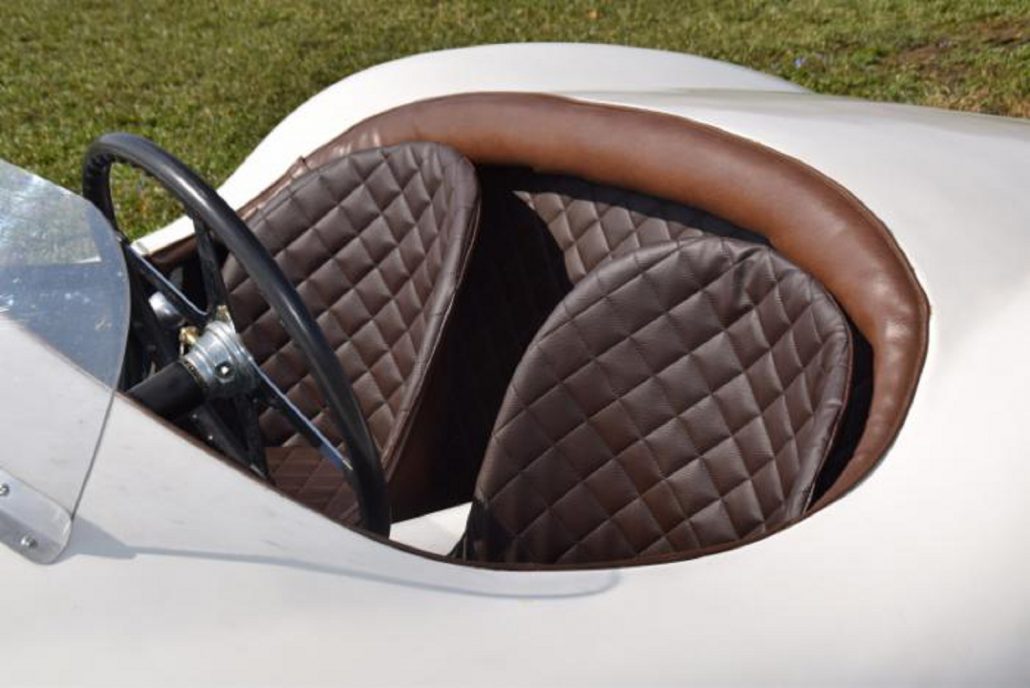 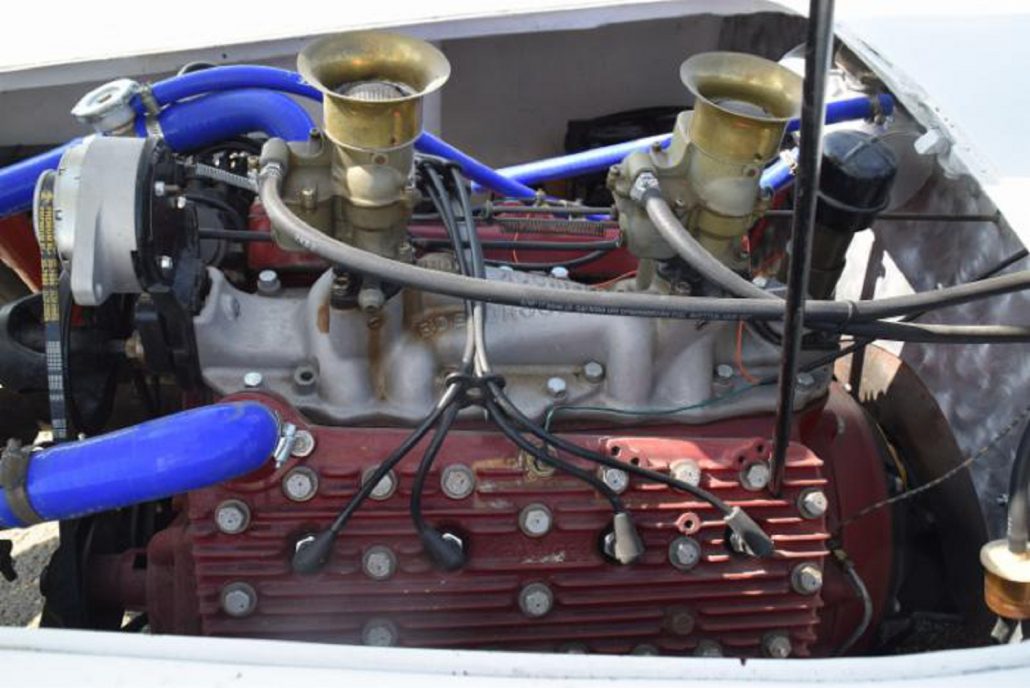 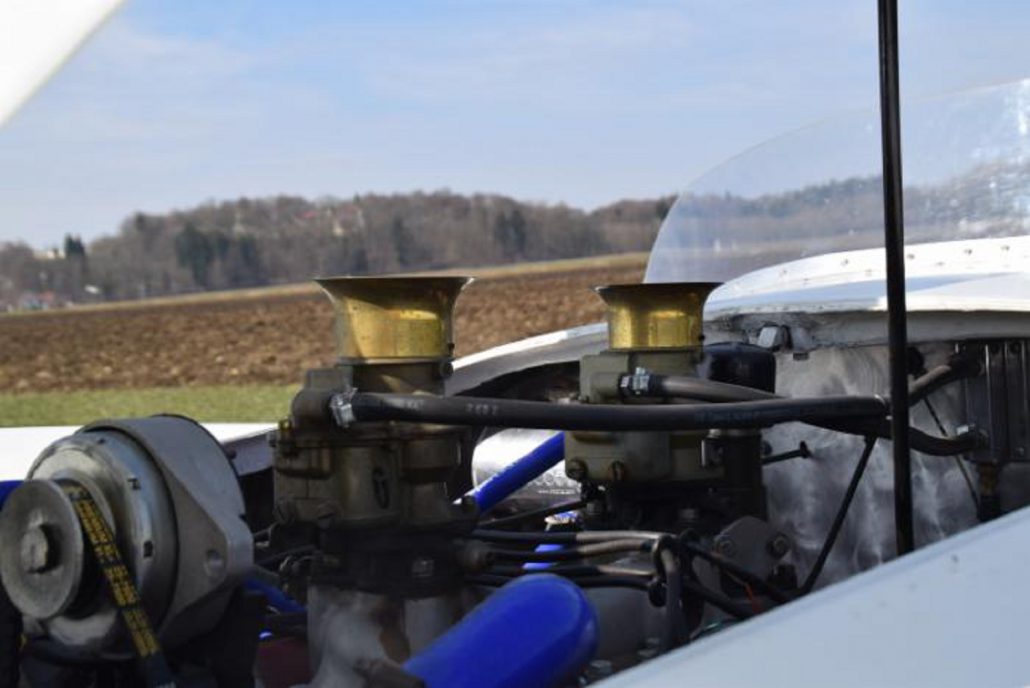 Andreas also put together a 5 minute video on his Glasspar.  It starts with a one-minute trailer on Glasspar from around 1953, and after that it shows his Glasspar in action for the next four minutes.  Check it out below:

Andreas is one busy guy and proud of his Glasspar.  In 2018, the European magazine Gasoline did a three page feature on his car.  And….they placed his Glasspar on the front cover too.  What an honor that is for not just Andreas but also for the Glasspar marque too.  You can check out the article below but it’s in German.  And yes….even with a last name like “Hacker” – I can only read English.  My family has been too long in America 🙂  Have fun with the article below: 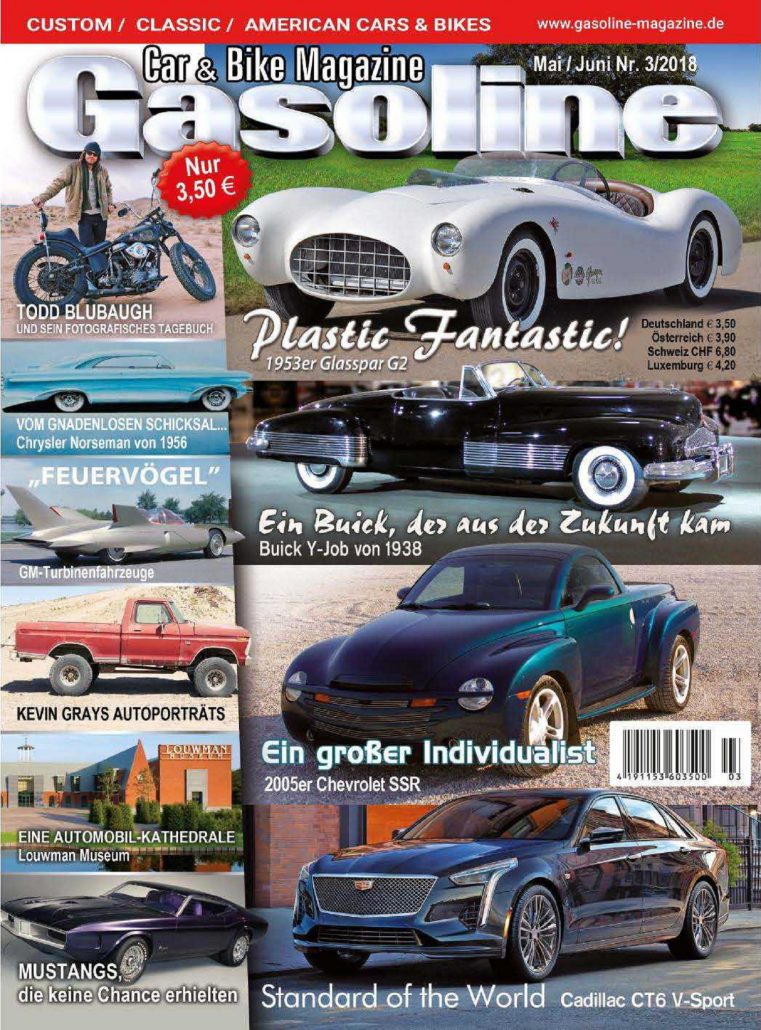 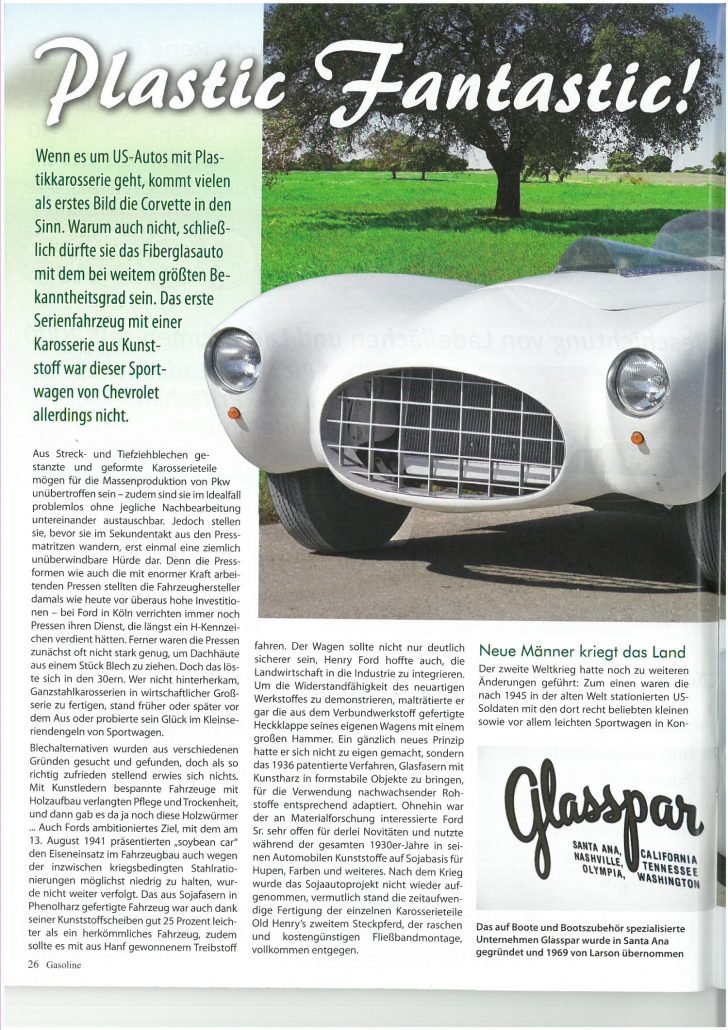 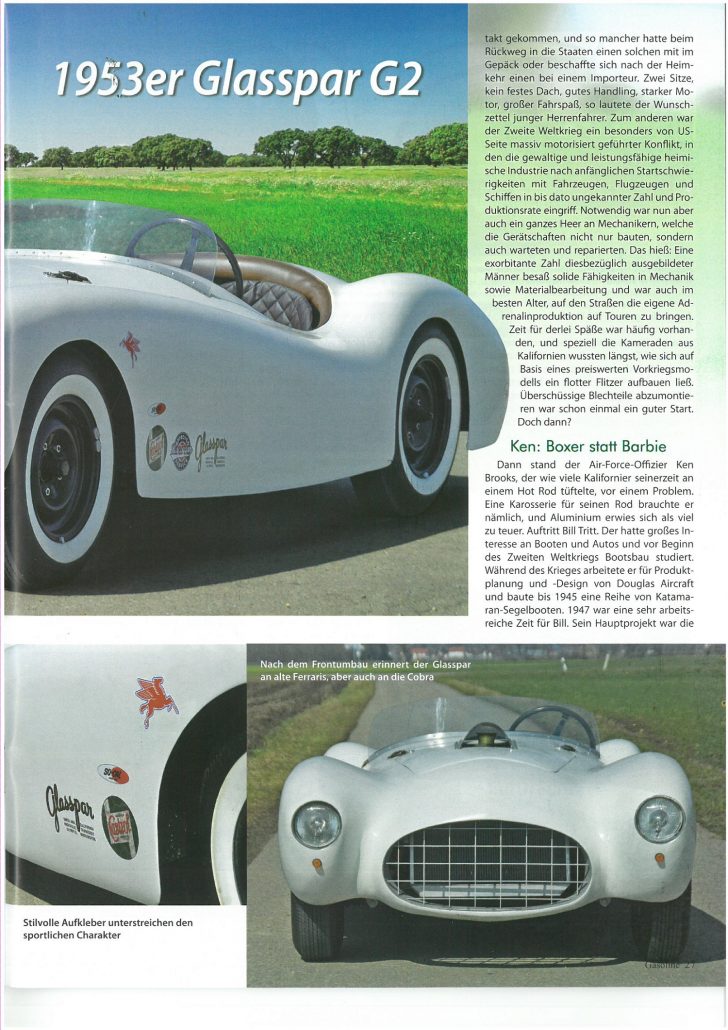 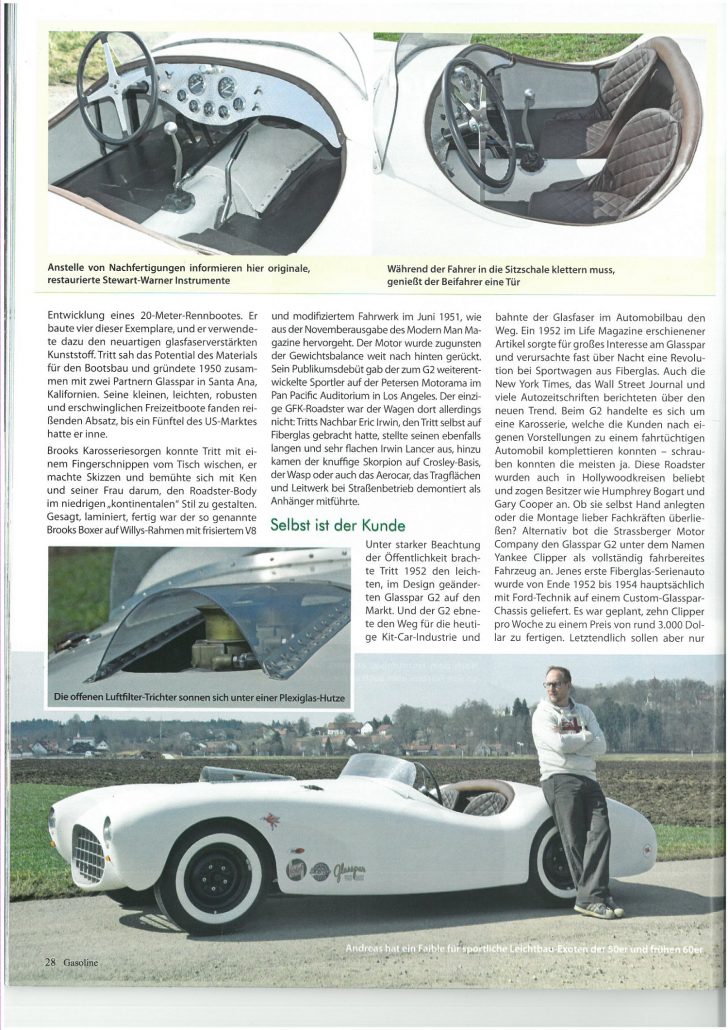 This Glasspar G2 is For Sale in Germany

Those of you interested in learning more about the car and possible purchase, can contact Andreas directly via his website.  Here’s a link to learn more about his Glasspar for sale:

And if you want to have even more fun, check out Andreas website on Barchettas, Devins, Apollos and more via the following link:

So in today’s story we honor the historic record of this car as well as individuals such as Bill Hoover who did an excellent job along with Jean Poirier in bringing significance to the Glasspar marque and saving history for all of us to enjoy years later.  Cheers to all involved in the story and I wish the best of success to the new owner of Andreas Graf’s Glasspar – may you have years of fun and excitement with such a nice car.