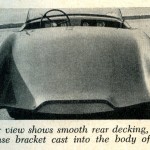 I’ve recently been calling Howard “Dutch” Darrin the “Rock Star” of fiberglass – and with good reason.  He produced a wider variety of prototypes and actual cars built from fiberglass in the postwar years than anyone else at the time.  Click here to review a postwar chronology of Dutch Darrin’s fiberglass work.

Let’s see what Bob Rolofson had to say about Darrin’s Dyna-Panhard Special back in 1960:

Back in 1953, when Robert Perreau of Los Angeles decided to import the $2000 Dyna-Panhard “Junior Sports,” he began looking around for a fiberglass shell to replace the boxy French body.  The result of his search is shown on these pages.

Although it was never officially announced, rumor has it that the shell was designed by “Dutch” Darrin, or some of the Art Center design students he hires from time to time to help him with rush jobs.  Basis for the rumor is the fact that during the six years he operated his design studios in Paris, he periodically acted as design engineer to the Panhard factory.

Caption: Side view of the Panhard Darrin accents smooth flow of highlight lines from bow to stern.

The base for this daring little shell was the front-wheel-driven Panhard, powered with a two-cylinder engine, with torsion-boar valve springs, mounted in unit with a four speed synchro gearbox, with differential and drive shafts to the front wheels.

This unit is bolted to the front of a wide, deep frame, with double leaf springing in front, and torsion bars and trailing arms locating a center-pivoted “V” shaped axle at the rear.  Hundreds of specials have been built on this chassis, from Deutsch-Bonnet record machines to H-modified sports cars.

The little bright blue American-designed fiberglass shell was sent to France, supposedly to be copied for factory production.  What happened to it?  No one seems to really know…just a passel of rumors. 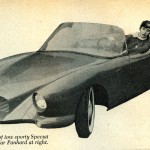 Robert Cumberford and the Darrin family helped confirm this car was truly designed by Dutch Darrin, and the building of it was assisted by Art Center students of Los Angeles.  After 1954 when the car was shipped to France, it disappeared.  I located two photos showing it on display at a French Auto Show, but after than….nothing.

Any of our “French Forgotten Fiberglass Aficionados” up for a treasure hunt?  How ‘bout you Charles Le Menestrel (Allied Swallow and Byers SR100 owner in France).  You and Robert Cumberford are both in France….perhaps you can “shake the trees” a bit (and some wonderful French wine too) and find yourself one special little car.  That would be one fun barn find, for sure! 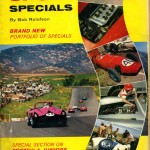 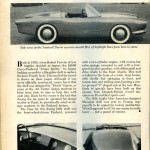 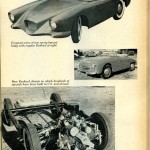 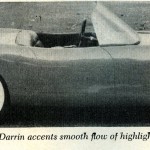 Caption: Side view of the Panhard Darrin accents smooth flow of highlight lines from bow to stern. 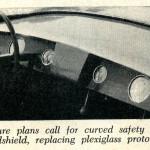 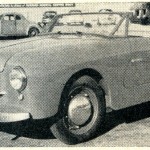 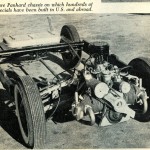 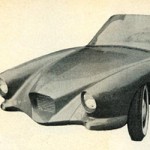