Ah the glory of research…much of what you find is questionable or useless.  Still other bits of info can be insightful, remarkable, or even intriguing in every way.  Take today’s article from the Editors of Road & Track – penned as an open letter to Kaiser Motor Cars in 1949.  Let’s see what they had to say and why it’s relevant to us here at Forgotten Fiberglass:

News of your 1950 model, to sell for $1100, has aroused both interest and speculation among enthusiasts.  Because an American-made quality small car has been long overdue, it is felt that some new manufacturer with courage enough for a bold approach will make the break with convention.

Could this be you, Mr. Kaiser?

Road and Track (June 1948) editorially suggested the Cisitalia as the ideal light car for manufacture in this country.  Our readers responded with a storm of approval.  The Cisitalia (pronounced Sis-eye-tal-lea or Cheesa-tal-lea) is unsurpassed for sheer beauty, is safer at 100 mph than domestic cars are at 70, and is a true sports car.

Originally developed and built in Italy, the factory has recently been moved to Argentina.  Your organization, Mr. Kaiser, is in an advantageous position to built the “Sissy:” aluminum for the body could be supplied from your own mills and the Cisitalia engine is basically a Fiat 1100 (for which you already have manufacturing rights).

Be bold, Mr. Kaiser, give America a real automobile – make your new model a copy of the famous Cisitalia.

The Editors, Road and Track 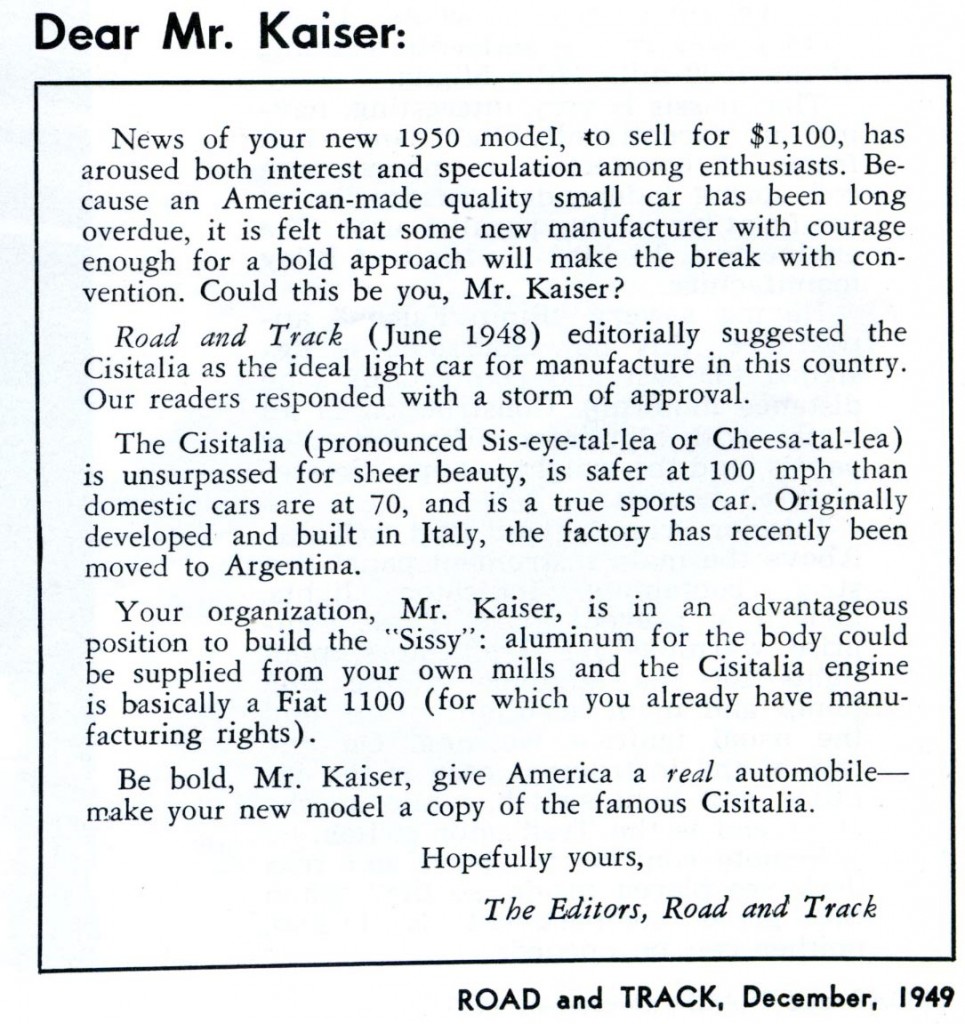 What great insight the Road & Track Editors had in choosing this car and laying down the gauntlet for such a challenge.  In fact, the Cisitalia discussed by Road and Track Editors turned out to be so significant that it was later recognized by the Museum of Modern Art (1951) as one of the most beautifully designed and built “8 Autos” of all time.  Click here to read the story about this achievement and recognition in 1951.

Road and Track was certainly right to challenge Kaiser Motors – and/or any other American Manufacturer of automobiles – on the need for a small, sporty American car.  And in fact Kaiser did have the courage and later was the first American manufacturer to announce the production plans for an American sports car – the Kaiser Darrin – in February of 1953 (the car later debuted in early 1954).  And this was built in the marvelous new material – fiberglass – certainly a “Darrin” move on their part (sorry….I meant to say “daring move on their part” – a “fiberglass funny…”)

So…it’s an interesting coincidence that in the Fall of 1952, Bill Burke had the opportunity to create a mold off of Bob Petersen’s Cisitalia which was going to debut at the November 1952 Petersen Motorama.  Although Burke did this for a different reason – to create a body he could take to Bonneville and test the limits of speed – as a by product and a way to help pay for the cost of building his new race car, Burke also made these fiberglass bodies and rolling chassis – hence cars – available to the American public.  And in kit and nearly completed form.  So the “American Cisitalia” proposed by the Editors of Road and Track became a reality – but not via Henry Kaiser and aluminum – rather via Bill Burke and that new wonder material….fiberglass. 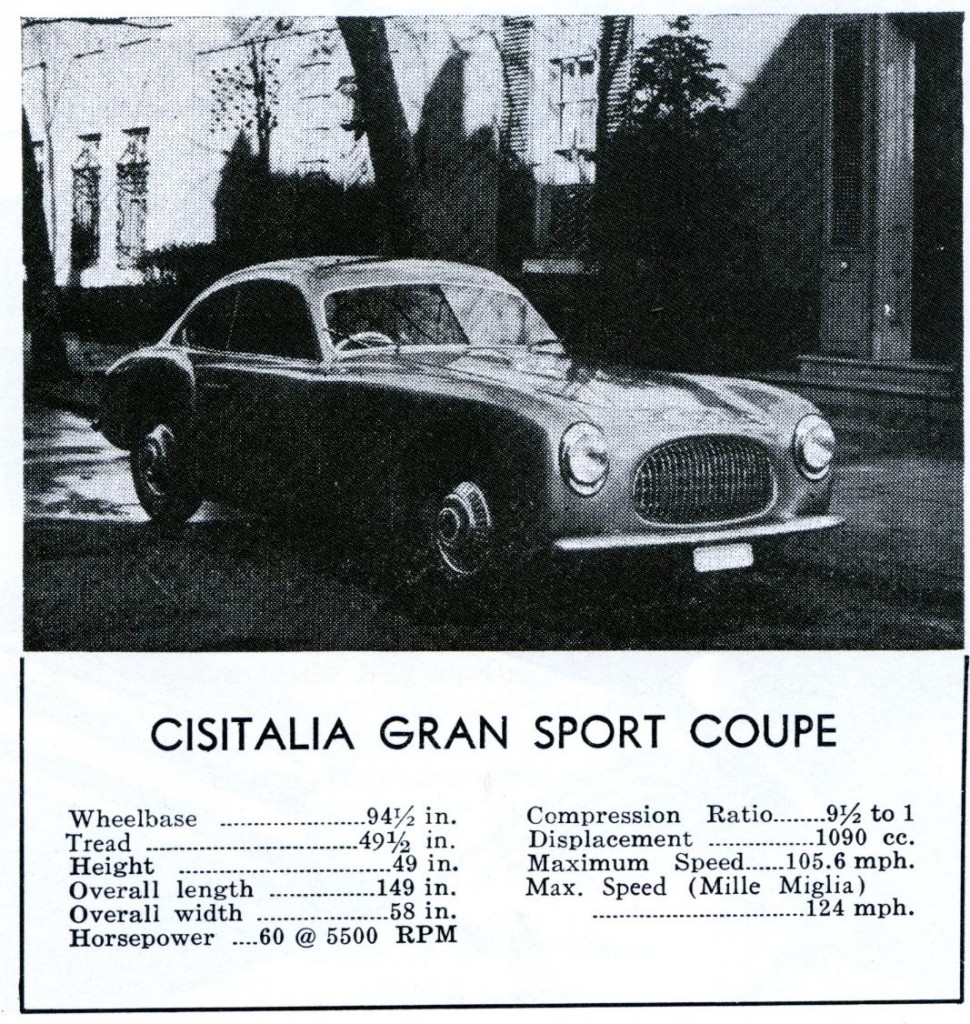 So it came to pass that Bill Burke, Mickey Thompson, and Roy Kinch – not Kaiser Motors – brought the Road and Track proposal to reality.  Coincidentally the debut of the Allied / Atlas Swallow was covered on December 1952 in Motor Trend – 3 years to the month of Road and Track’s original challenge to Kaiser.  And thus as told…an “American Cisitalia” was born. 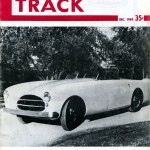 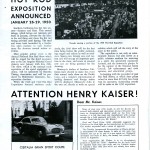 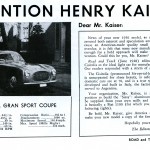 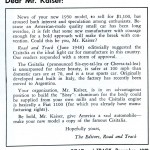 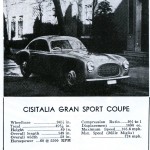 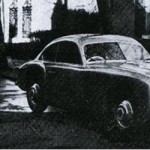