It’s fascinating to learn about a fiberglass bodied sports car with a “build” heritage exactly that of an American special but in South Africa.  It was the same timeframe too – the mid 1950s.  I first came across the history of this car via my friend and Singer sports car historian Peter McKercher.

We were tracking down the history of special-bodied cars in America built on Singer chassis, and during the course of our research, two special bodies from South Africa appeared (more about this second car from South Africa in a future story).  The car that Peter shared with me was called the “Protea.”  You’ll learn more about the history of the name of the car as you delve into the story we are sharing today.

Peter and I did a bit of poking around the internet in the next few years to learn more about the Protea and its heritage.  During this research we learned about a 2014 article that appeared in a South African newspaper about the history of the car and we are sharing that article with you here today.

So without delay, let’s have some fun and expand our knowledge a bit more – this time visiting another continent to learn about handcrafted sports cars built in the early postwar period.  Go get ’em gang 🙂 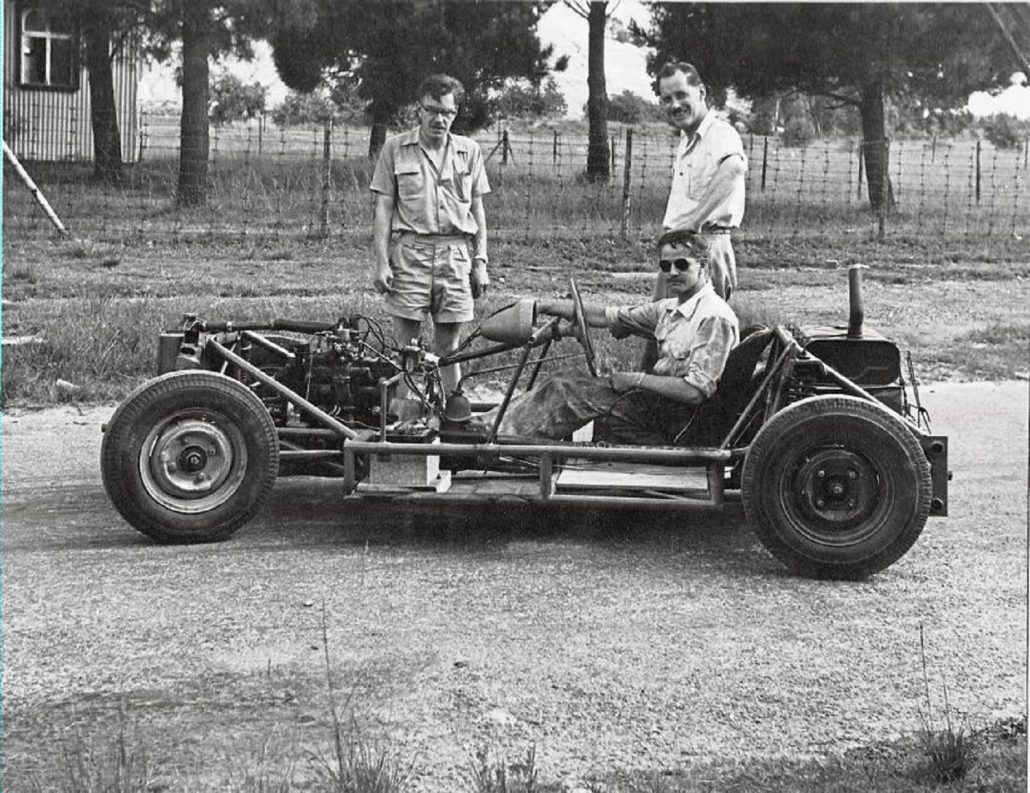 South Africa’s First Car Will Race Again: A history of the Protea
This article was first published in the Rapport (Johannesburg) on 12 October 2014
By Boris Gorelik

In a spacious but overfull garage in an old Johannesburg suburb, Ian Schwartz and his six year old daughter Amy are tinkering with a red jalopy. Schwartz brought this open two-seater home in a trailer. The car had been hacked about. It looked like a mock Ferrari Testa Rossa. A previous owner had reshaped its fibreglass body using plaster of Paris.

An engineer and motorsport enthusiast, Schwartz has pledged to restore this vehicle and get it going again. It will be worth the trouble. His jalopy is a legendary Protea, South Africa’s first production car. Among the BRICS nations, only Russia can boast a longer history of domestic production than South Africa. The Protea took to the road nearly sixty years ago.

But, at present, South Africa happens to be the only BRICS country without an independent automotive industry. All manufacturers of passenger cars here are owned by foreign companies. It was the same in 1956, when three men gathered in an old corrugated-iron shed near the Turffontein horseracing track to design the Protea. 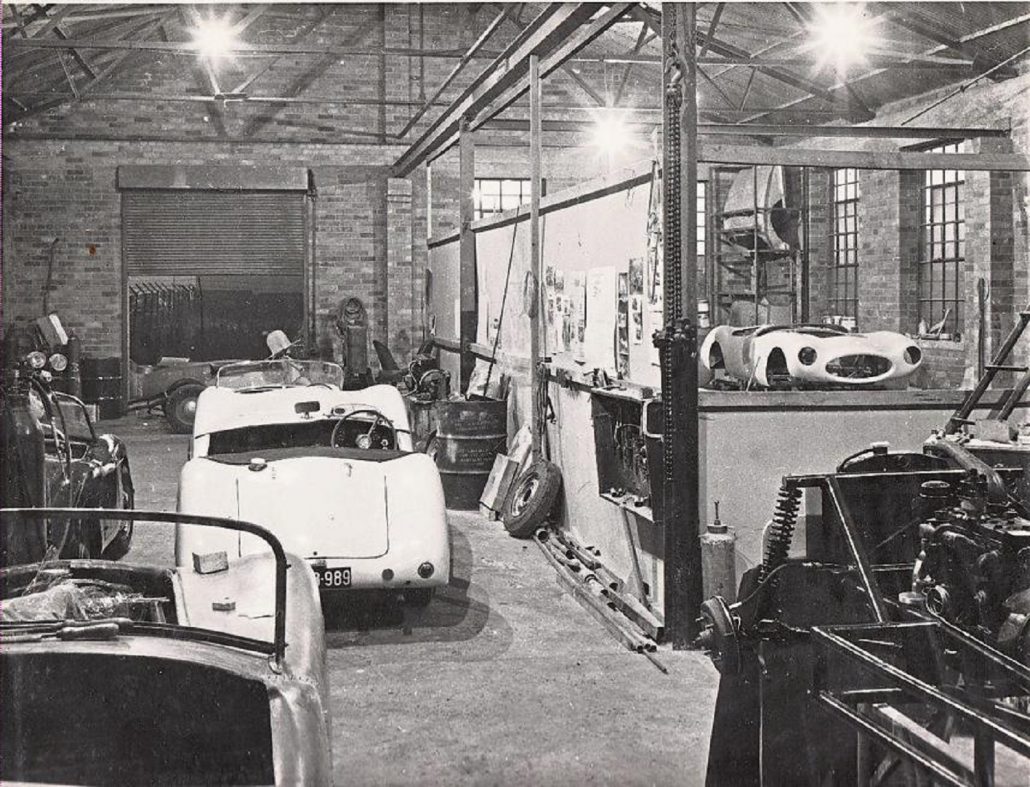 The Protea Factory Where The Sports Cars Were Built

Two of them have passed away. The only remaining member of the team, John Myers, is turning 92 in October.  He was born and raised in the hills of northwest India. In 1938, his family moved to England, where Myers finished his schooling.  At seventeen, he joined up and went to war. Trained as a mechanic, Myers worked with the Royal Mechanical and Electrical Engineers on Sherman tanks and amphibious vehicles.

He was transferred to fight the Japanese in Southeast Asia. His ship called at Durban along the way. ‘After two years of the Blitz, blackouts and rationing, South Africa looked like paradise!’ remembers Myers. When his time in the army finished, he moved to South Africa. The local motor industry needed mechanics. Less than ten years later, Myers and his friends Rowland Fincher and Dr Alec Roy decided to build a sports car. They believed that racing enthusiasts like themselves would appreciate a light, robust and reasonably priced vehicle. 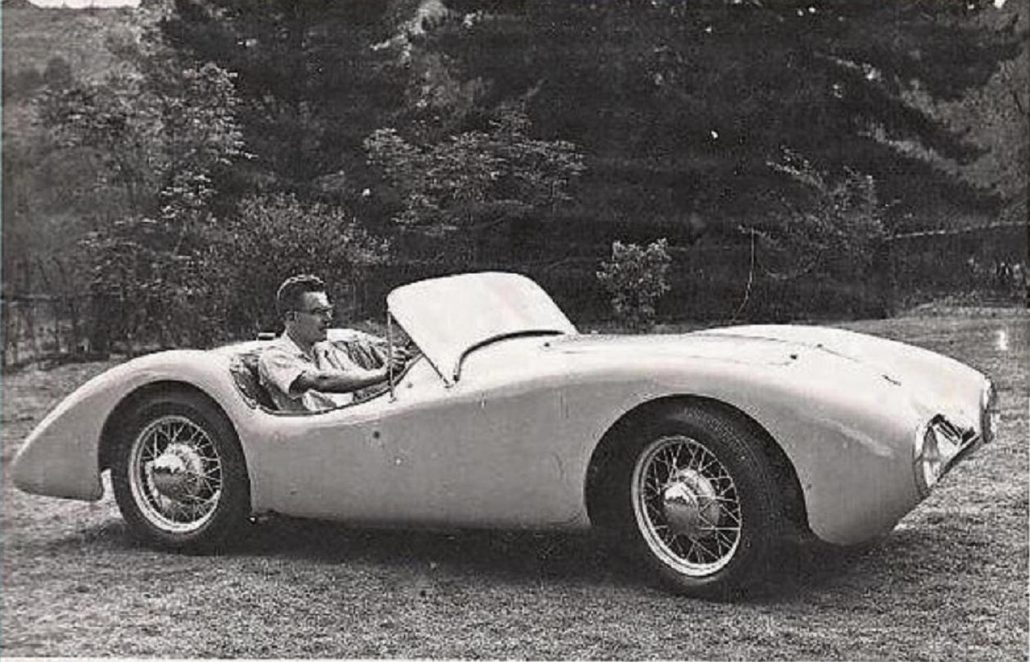 ‘You could only get grand tourers’, says Myers. ‘But they didn’t fit the bill. So we decided to have a go and design our own racer.’  All the partners had a day job. They worked on the car only in after hours and on weekends. Their drawing office consisted of the garage floor, a piece of chalk and a couple of boxes to sit on. They designed the chassis frame on their own.

As for the style of the body, it was a bit of a hotchpotch. Myers and his partners would go through motoring magazines in search of ideas, borrowing bits from advanced models of the time. They pioneered the use of fibreglass in the South African automotive industry. A fibreglass body seemed most appropriate for a small production sports car. Overseas automotive manufacturers were using this material since the beginning of the decade. 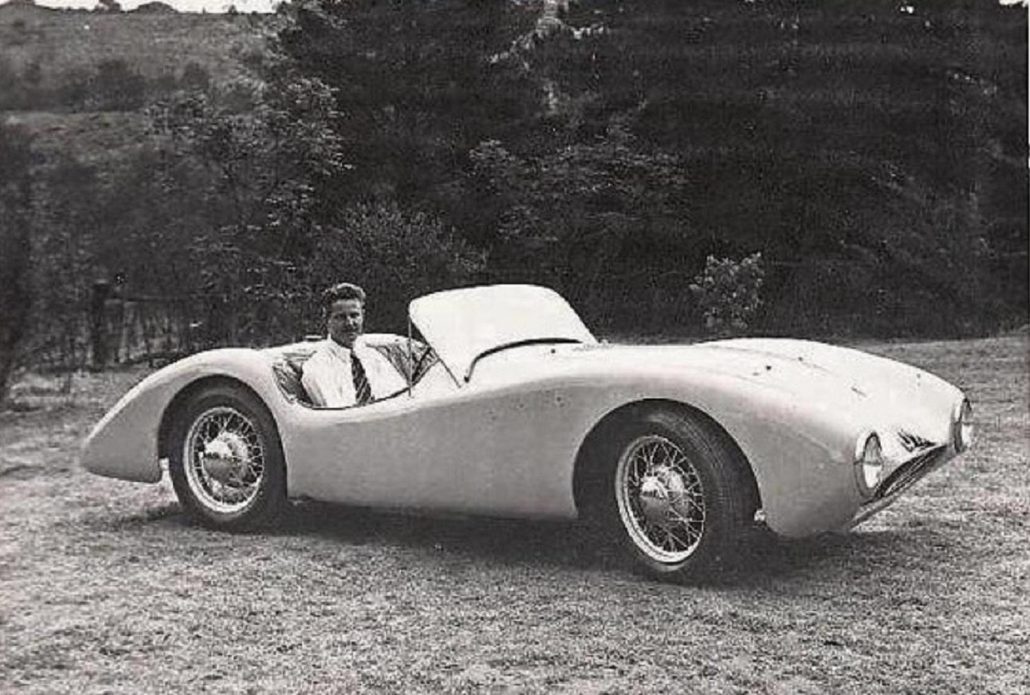 But few people in South Africa knew how to mould fibreglass. Even Dr Roy, an industrial chemist for Anglo-American, had to learn as he went along. ‘We thought we should call our vehicle after the South African national flower, the Protea’, recounts Myers. It was their answer to the Lotus, a British brand of racing cars.

The prototype caught the eye of Robert Hudson, owner of a company that made railway equipment for mines. He joined the project as the sponsor. Until then, the partners had financed the construction themselves, out of their savings. The newly founded Protea company hired a small factory in Booysens Reserve, very close to where the Gold Reef City is now. In those days, mine ponies used to walk on the road in front of the entrance, carrying their load. 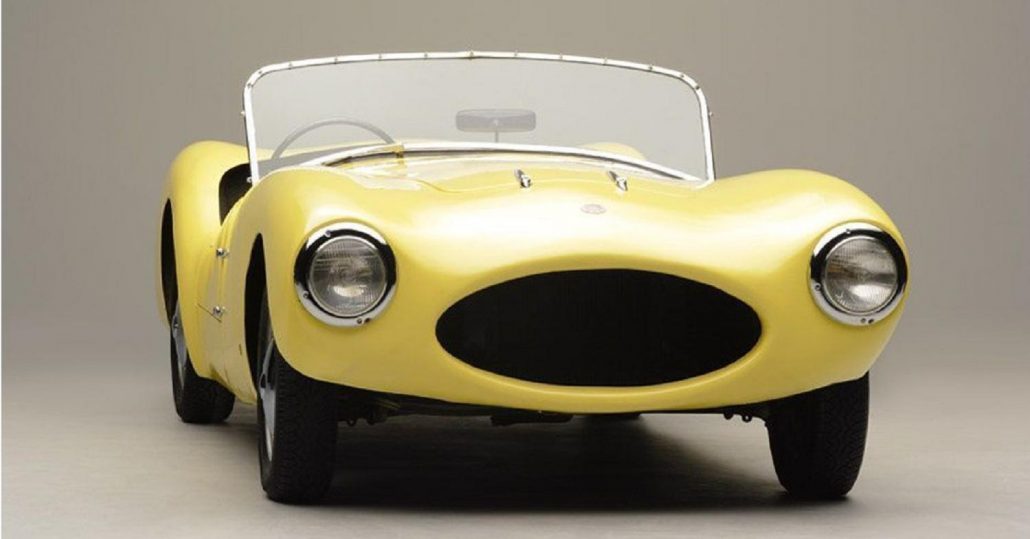 Myers became the company’s only full-time employee. He lived in the flat above the factory. The others used to come in when they could. ‘All of us were bachelors, and we worked sixteen hours a day’, recounts Myers. ‘It was only later that I married an Afrikaans girl and had three children with her.’

Serial production of Proteas began in 1957. All the mechanical parts were new. They managed to get them from Ford, which produced no sports models and didn’t regard the Protea as competition. The South African branch supplied them with the gearboxes, wheels and rear axles. Myers and his team installed the Ford 100E side-valve engine in their cars. With latest British equipment, they doubled the horsepower from 36 to 54.

‘The whole car was so low’, wrote one of the Protea owners, ‘that one could comfortably sit in the driver’s seat and stub out your cigarette on the road surface!’  It seems that most of the Protea buyers were young professionals keen on motorsport. ‘The Protea was attractive and very economical, with good road-holding and brakes’, says John Myers. ‘And, I suppose, they wanted a car that was South African.’ 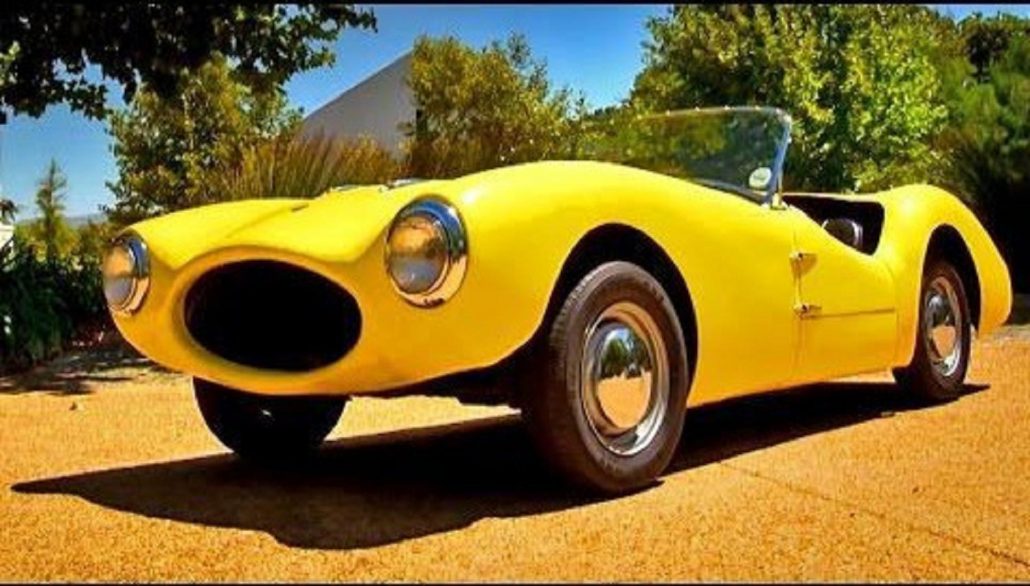 Tim Cooke, then a 22-year-old student, bought the first production unit.  ‘I used to drive my Protea to Wits every day, and it caused a sensation’, he recounts. ‘No one had seen such car before. I had very, very few difficulties with it. I loved it to death!’  Ian Schwartz told me of another customer of the Protea company, Brian Davey. He purchased only the fibreglass body and built the rest of the car himself, with a Renault engine. It was one of the fastest Proteas ever.

In the 1960s, Davey took part in designing the Ratel, the SADF infantry fighting vehicle.  ‘We had a lot of fun making the Protea — but we didn’t make any money’, admits Myers. They were running on a shoestring. The company had to pay duty on the imported parts upfront. It swallowed up nearly 15 per cent of the selling price. When the sponsorship ran out, they couldn’t afford to continue on their own.

Production ended in October 1958, just after a year. Nobody knows how many units were put together. Myers believes they manufactured about twenty-six Proteas. Schwartz says that the company made only sixteen ‘proper’ units, with Ford engines, and a number of customised versions. In addition, they sold Protea fibreglass bodies separately.

None of the team members designed another production car. But before the project folded, Myers came up with the fastest Protea edition. Built with Triumph TR2 parts and the light Protea chassis, the car won the six-hour endurance race in Pietermaritzburg outright. ‘I think the Protea was before its time’, says Myers. ‘Young people didn’t make as much money as they do today. We should have made bakkies and built the sports cars on order only.’ 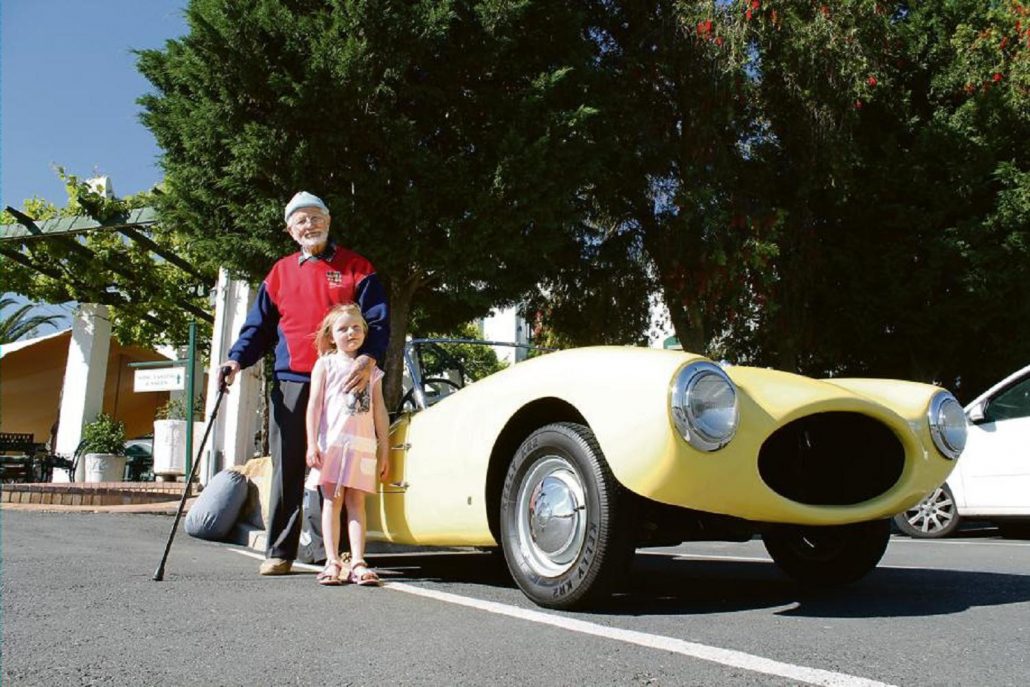 Ironically, in the following decades, South Africans continued to design almost exclusively sports cars. Most of these projects — Eagle, Scarlatti, Phoenix, Caracal, Sabre — either ended very quickly or never went into production at all. The Dart, launched half a year after the Protea, was perhaps the most commercially successful passenger car developed in South Africa. The company sold several hundred units, both here and in Britain.

Overseas brands have produced very popular models, geared towards the local market. But these have been modifications of foreign makes, not indigenous designs. The VW Citi Golf, for example, was a version of the VW Golf Mk1. And Toyota Corolla Quest is basically a downgraded Corolla E150.

‘The main reason South African attempts at producing an indigenous car failed is economy of scale’, says veteran motoring author Prof Hans Heese. The local market is said to be too limited for feasible mass production of domestic cars.

Only several Proteas have survived. There is a prototype at the James Hall Museum of Transport in Johannesburg and the production unit number four at the Franschhoek Motor Museum. The others are in private collections. Ian Schwartz has been trying to bring his Protea back to life using Myers’s original sketches and workbooks. It’s going to be a racing car, he hopes. After all, Myers built this unit as Protea’s official ‘works racer’. On the track, it was driven by famous Tony Ferguson. A Coventry Climax racing engine will be installed under the bonnet. John Myers says his team always wanted to have it in their car.

Schwartz has also been working on a lavishly illustrated history of the Protea. His daughter Amy brings a thick scrapbook. Through notes, photos and appliqué, she documents their Protea project. One of her drawings is titled ‘Our biggest dream’. It shows her, her dad and John Myers in their Protea. ‘I don’t know if he can join us for a ride’, says Schwartz. ‘But if we could get this car going for him, it would be great.’

As shared in the article above, there were sports cars built by the factory and ones that you could build yourself.  When Peter McKercher researched this several years ago he found that as many as 2 to 3 Protea sports cars may have been built with a Singer chassis and drivetrain.  It would be great to hear if one of these sports cars survives today with the Singer chassis and drivetrain intact, and we may learn as our research continues with this car and others like it – handcrafted specials built across the world.