Renault Specials have a special place for me given that my first fiberglass sports car was Renault based – the 1962 Shark Roadster – a car I still have today.  So when I recently came across an article about an early fiberglass Renault sport car I was thrilled.

The article from today’s story came out in February, 1954 so it’s fairly safe to assume that the car was finished some time in 1953.  This makes it “tied” with the 1953 Rogue – the only other early 50s fiberglass bodied Renault special we’ve found documented so far.

Let’s have a look at what was shared about his car back in February, 1953: 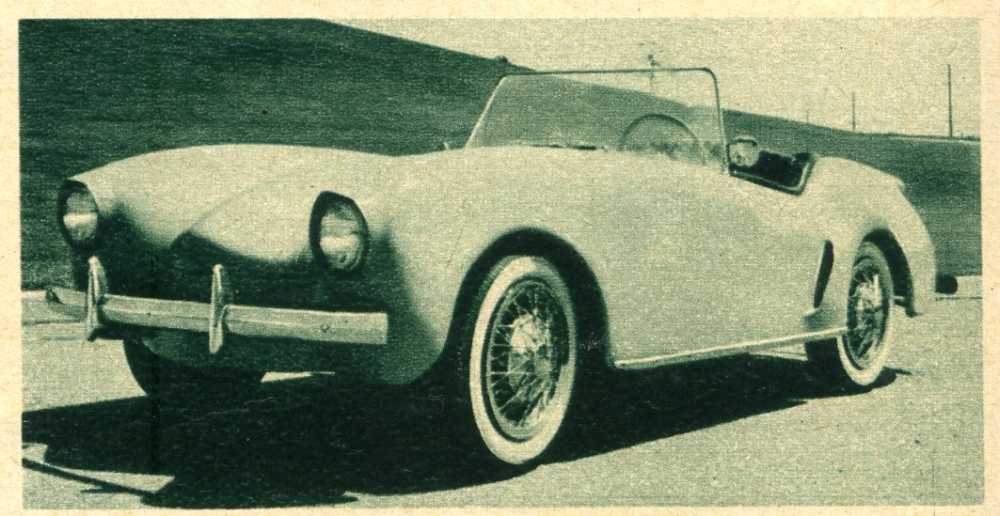 How I Customized My Car
By Jim Lodge
Motor Trend: February, 1953

I had been interested in fiberglass as a medium for helicopter construction.  One day I went into Lauer Motors in Culver City, California and started talking about a Renault rear end and transmission for use in a helicopter.  Mr. Lauer, interested in the project, discussed the problem with me.

The result of the conversation? We went to the back of the shop where he had a smashed-up Renault.  He asked if I could make a sports car out of the wreck; I said “Yes,” and went to work.  That was the end of my helicopter plans, and the start of a real experience in body building.

The first two plastic molds had to be thrown away (that hurt, considering the time spent working on them), but the third mold was acceptable.  My friends and I worked nights and weekends, and when we ran out of money, we relied on other friends to keep the project alive.

The Renault body was cut away, leaving the floorboards, wheel wells, and firewall.  We incorporated a unique design principle:  Seamless tubing was used to form the body contour.  The tubing was then laminatd into the fiberglass shell; thus, complete unit construction, with no chassis or frame. 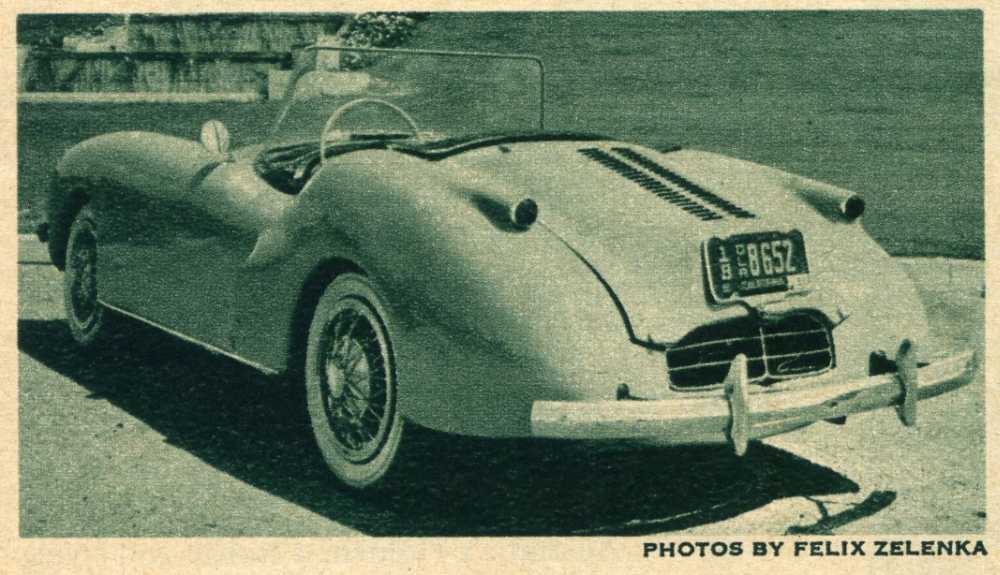 So gang…we have another fiberglass special to be on the lookout for – and a rare early Renault special at that!  I love the louvers in the rear hood – not easy to do in fiberglass.  But one of the accessories you see when you look at the back of magazines back then are “louver panels” which can be welded, attached, or fiberglassed to a panel.  That’s probably how this was addressed here.

And the overall design and proportions seem quite nice for a sports car of this size.  Most American specials such as the Victress S1A had a wheelbase close to 100 inches.  If this car were based on a Renault 4CV it would have a wheelbase of 82.5 inches – almost 2 feet less than the standard American counterpart.  Diminutive but nicely done, and if I could take the bumpers off of it (like most fiberglass specials of the day) the front might look a bit more attractive too.  All in all….a nice little Renault Special.

Those of you who like Renaults as I do…what a great car this would be to find – one of two of the earliest fiberglass Renault based sports cars made in America the other being the 1953 Rogue. 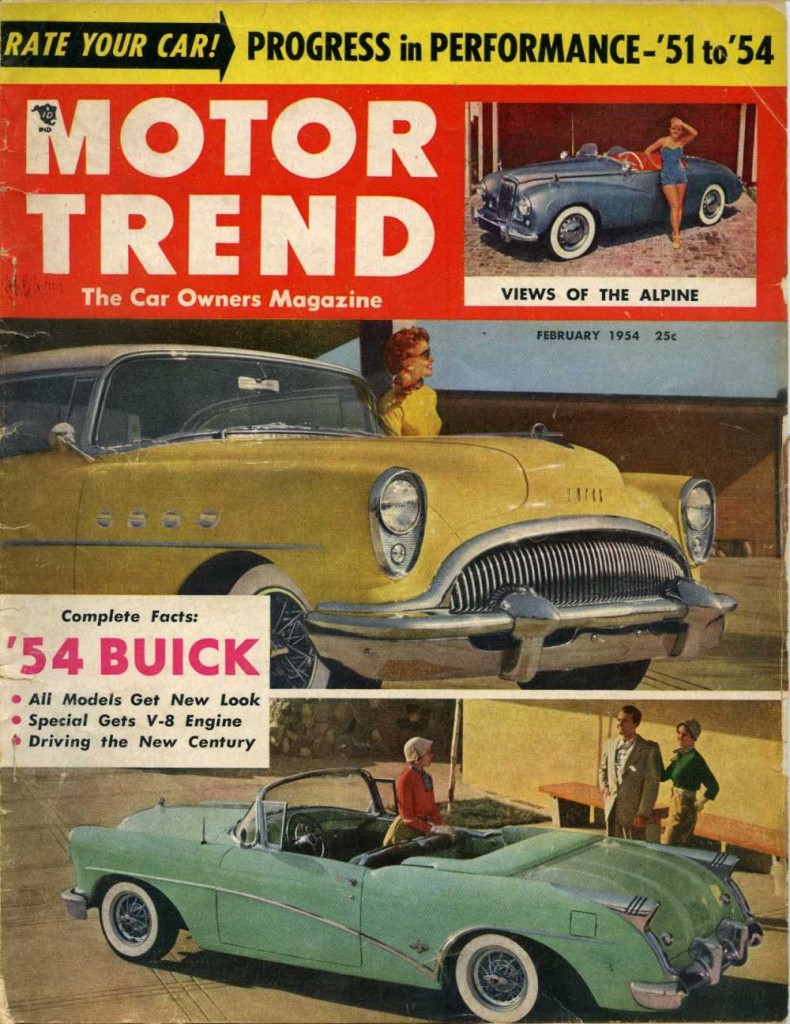 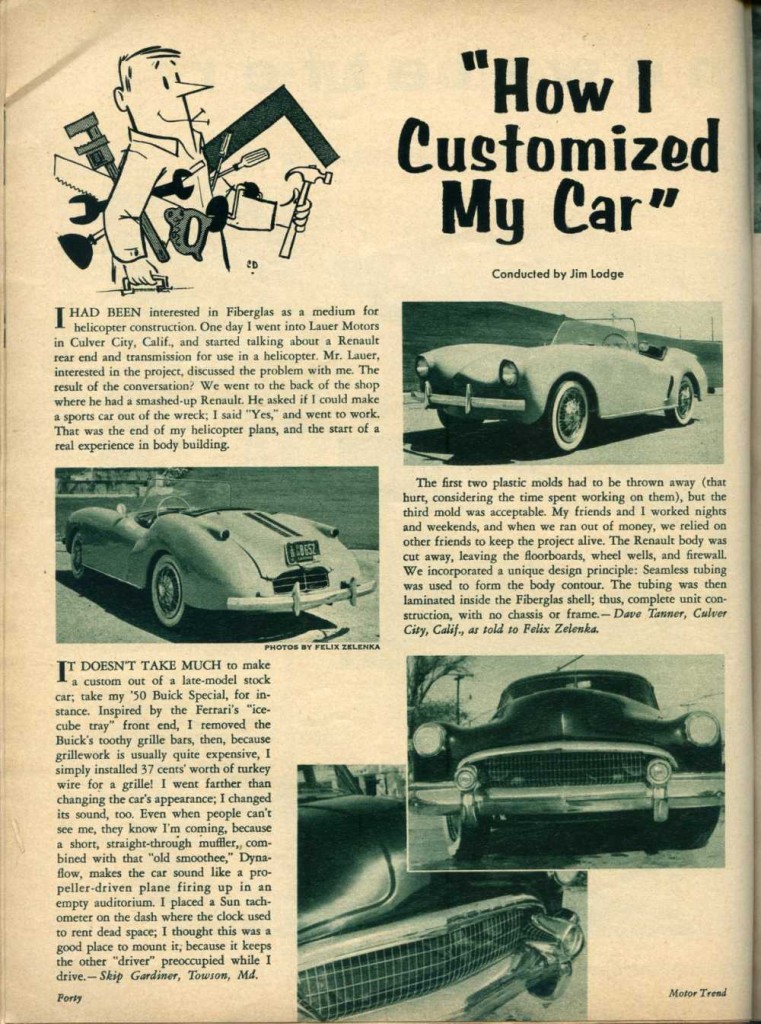