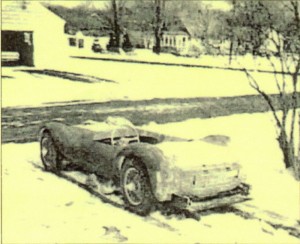 The Original Shape Created By Rhodes Was Quite Different Than The Final Design And Build of His Fiberglass Bodied Morgan Special.

I have the honor of again welcoming Jim Simpson of “Simpson Design” to our flock of fiberglass fanatics and have asked Jim if he would be willing to contribute stories from time to time to Forgotten Fiberglass.

I’m honored that Jim accepted the offer and today is another in a series of stories and “adventures in ‘glass” by fiberglass aficionado and good friend…Jim Simpson.

Take it away Jim!

I am constantly amazed at the East Coast’s history of remarkable cars and the people who built them, particularly in the New York area. I’ve wondered countless times if it’s due to the huge population in that area or because New York car shows were so well attended, or people are just plain better car educated. What I do know is that custom car building in the 50’s and 60’s and perhaps even now, is as prolific in the Northeast as in California.

A few years ago I attended the Barrett Jackson Auction with one of my clients. We were both dumbstruck by this lovely little Morgan Sports racer. Primarily a Ferrari collector, my client’s sudden enthusiasm took me by surprise. I reminded him of our rule about buying cars at auctions, that we know going in what our max bid will be and we don’t get caught up in the moment…

The car started out life as a typical (if there is such a thing) 1956 Morgan plus 4, chassis #4021. Sold new in New York by Fergus Motors, it was resold as a used car in November of 1958 to Cecil J. Rhodes of Bemis Point, New York. Shortly after Rhodes bought the car, it was involved in an accident that made a mess of the front fenders and grille cowl area.

The car was repaired but not to Rhodes’s satisfaction. Though he continued to drive it through the next year, he had largely lost interest in it. He stuck it in the garage, deciding he’d rebody it later.

In the summer of 1963 Rhodes stripped the Morgan factory body from the car and started making design studies. He was fascinated with the Scaglietti bodied Ferrari Mondial, arguably one of the prettiest race cars of the day and one that I believe Bill Devin must have been inspired by as well.

The following summer, starting with bits of corrugated cardboard over the existing mechanicals of the Morgan, he experimented with scale and shape. Wanting to keep the body of the car very tight over the chassis, he used foam clay and plaster to achieve his vision and then began adding fiberglass. 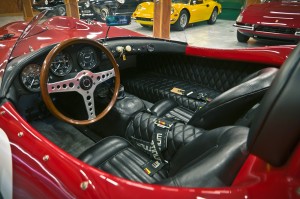 The Finished Cockpit Is Exquisite In Design and Execution. What a Blast This Must Be To Drive!

By fall, he had completed the car to the point of being ready for trimming the interior and started driving it. Hoping to get more out of the engine, he took it to a mechanic, who proceeded to somehow ruin the TR3 motor.

It was the final blow for Rhodes; in disgust he put the car away and it remained untouched until 1978.

The fiberglass work done by Rhodes was lightweight and very high quality. I don’t know if he was just very talented and capable or if he’d had previous experience. It’s also not clear if it was Rhodes who hand fabricated the lovely egg crate grille, the windshield and very elaborate chrome script on the rear of the trunk lid.

Interestingly, the frame around the inside of the trunk lid is metal. Notice the car has no doors; it does have high fiberglass sills inside that clearly add to the structural rigidity of the body.

The car traded hands several times until enthusiast John Hammond in Michigan bought the car restored and brought it almost to completion for his client Terry Mahrle. In 1990 it was auctioned off by Rick Cole Auctions to John Hibbard of Cardiff, CA. Hibbard stuck it in his collection and hardly drove it, selling it on in 1996 to another collector, Jay Hoffman of Scottsdale AZ for his extensive collection.

What this tedious history of disuse and owner change illustrates is that regardless of how distinctive, prestigious or unusual cars may be, they often disappear from the public eye for years at a time. And we collectors and enthusiasts tend to give them up for lost.

Early in 2004 the car was sold again to Park Place Motors in Bellevue, Washington. Park Place displayed the car amidst their usual grouping of amazing cars for sale for nearly a year. Finally despairing of finding a buyer locally, they put the car in the Barrett Jackson Auction, where my client and I found it, a lovely little fiberglass bodied enigma.

So much for rules – my client made the decision to take it home. It is the ultimate irony that another Washingtonian had to travel hundreds of miles to discover a car that sat only 40 miles away from him for nearly a year. 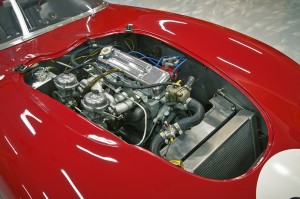 Close Up Of Engine of Morgan Special – Finished To A Very High Degree.

Since then, I’ve had the pleasure of doing extensive mechanical rebuilding, including brakes, steering, and cooling system, and much work on the engine and carburetion. Somewhere in its travels, the car acquired a 60’s TR4 engine which it has to this day.

We have done a lot of cosmetic refurbishment as well – rebuilding gauges, restoring the wrinkle finish on the dash, and repairing the instrument binnacle. We also re did much of the engine compartment, which was looking pretty tired.

Kenny Arnold, a good friend and terrific upholstery man in Texas, remade much of the interior, including all the Wilton carpets and quilted leather work. The car has also been sympathetically fitted with a fire suppression system, a good idea for older vehicles.

The little Morgan has finally found the right owner in my client and a long term home. It is part of the Black Horse Racing collection and is driven regularly. The car is very lightweight (guessing 1,200 lbs at most) and the performance is sparkling. Even in the midst of terrific Ferrari’s and other race cars in Black Horse Racings collection, that are all much more valuable, the little Morgan is enjoyed and revered.

It has been shown, much to the public’s delight, at many car shows, including the prestigious Classy Chassis Concours in Houston,Texas, this past summer. The Morgan is also no stranger to receiving awards at the shows it attends, and is always a crowd favorite.

Much to his credit, my client is very hands on guy, who built himself a nice, very well equipped, personal work shop. He’s gone out of his way to learn much about all of his cars and is not at all bashful about getting his hands dirty working on them. It’s clear to me he quite enjoys the full experience of car owner and enthusiast.

If you’re ever on Whidbey Island, Washington, on a nice day pretty much any time of the year, don’t be surprised to see the little Morgan special driven by a man sporting racing goggles and a huge grin.

Sadly, as is too often the case with specials, home builds, and kit cars, the people who began the projects aren’t able to see their vision through and never get to enjoy the reward of driving their concepts. But I believe Mr. Rhodes would be pleased to see how the car he conceived and built has become so much appreciated. 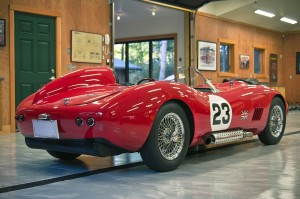 Thanks again to Jim Simpson of Simpson Design for another fascinating look at a fiberglass sports car special worthy of recognition and respect in every way. I look forward to the next story by Jim and the direction it may take us.

Keep the stories coming Jim and be sure to checkout the latest news on the Simpson Design website by clicking here. 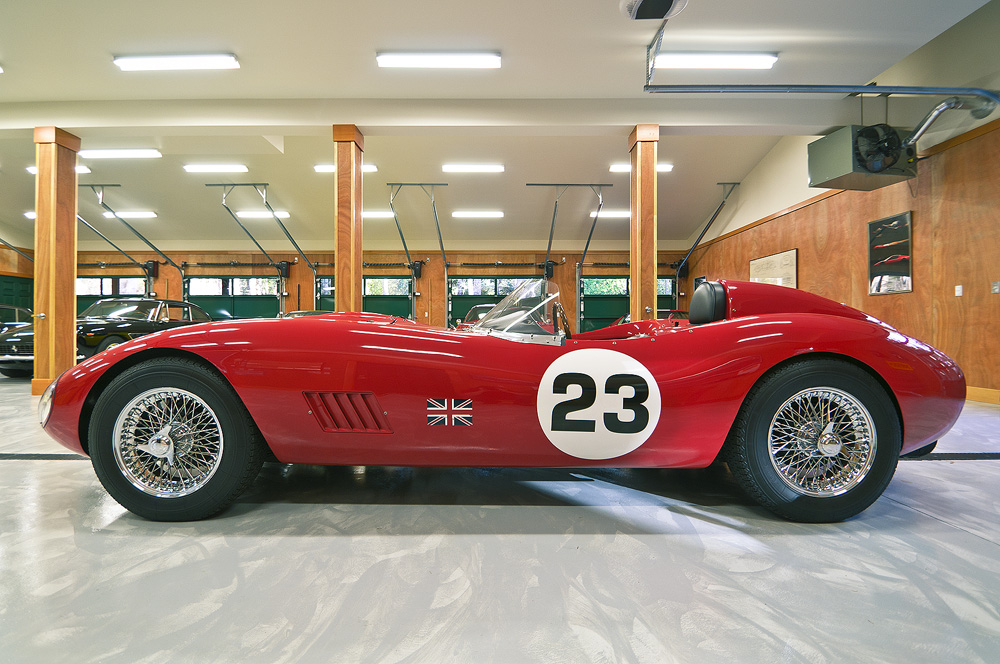 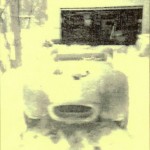 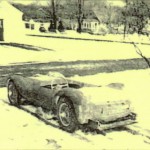 The Original Shape Created By Rhodes Was Quite Different Than The Final Design And Build of His Fiberglass Bodied Morgan Special. 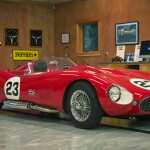 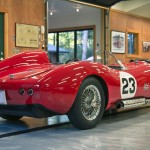 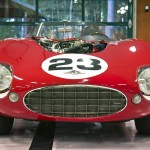 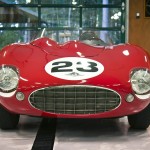 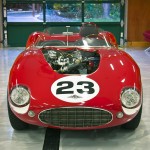 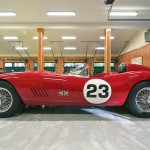 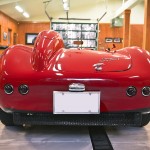 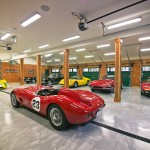 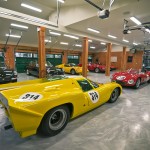 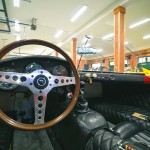 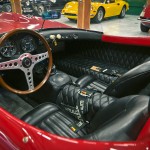 The Finished Cockpit Is Exquisite In Design and Execution. What a Blast This Must Be To Drive! 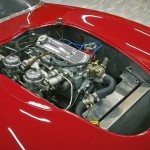 Close Up Of Engine of Morgan Special – Finished To A Very High Degree. 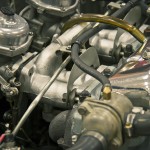 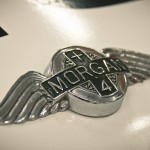 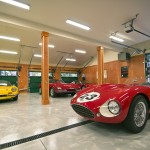 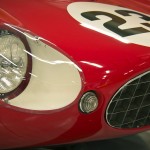 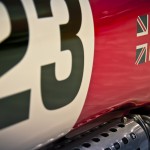 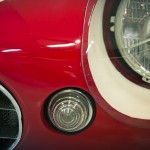 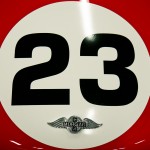 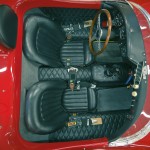 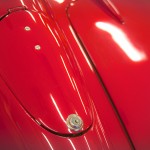 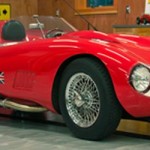