I’ve always considered the pinnacle of the car hobby to be designing and building your own car – for those with the talent and skills to do so.  Think about the passion one must have to consider all elements of a “build.”   Putting a body design concept down on paper and then translating it to three dimensions.  Chassis design and construction…body mounting techniques…drivetrain choices….seating positions….and this list is actually simplifying the process.

This complexity is why companies such as Glasspar, Woodill, Victress and others burst forward in the early 1950s – to help reduce the level of work needed to design and build your own sports car.  But it’s an interesting point.  Even if you bought a body from a manufacturer back then, the average time it took to build a car having procured a body is 2000 hours – a figure shared back then and agreed upon by those we’ve interviewed over the years.  Translating to the modern 40 hour work week, that’s 50 weeks of full-time work with 2 weeks off to get a bit of rest (vacation?).  That’s a full year of work to build a car Undiscovered Classics aficionados with little extra time for other activities.

That’s why I celebrate these handcrafted specials.  Taking a dream and making it a reality is the hardest thing to do – and one that these postwar craftsmen did across the country.  Just like the person who built today’s car – the 1959 Sacramento Special.

This car was spotted on Craigslist in Sacramento, California and sent to us by one of our Undiscovered Classics friends.  In short time, I spoke to the owner, Cameron Hampton, and learned that the he had acquired the car from the family of the person who built it and it had been kept with the builder his entire life.  We struck a deal and then called in the “big guns” to coordinate transport and shipping – Dennis Gerdes.  The car had very nice lines as you can see from the photos below taken by Dennis. 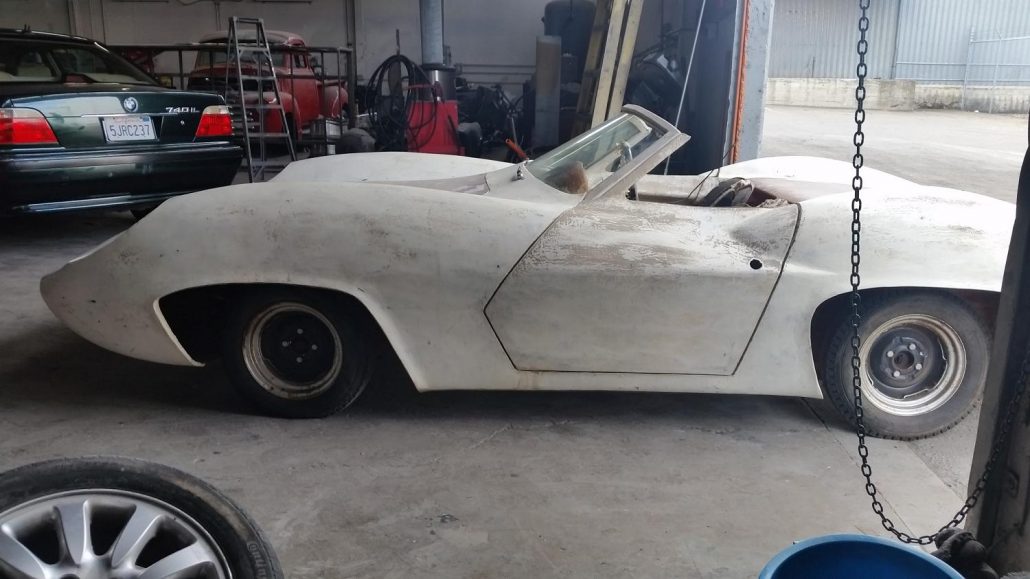 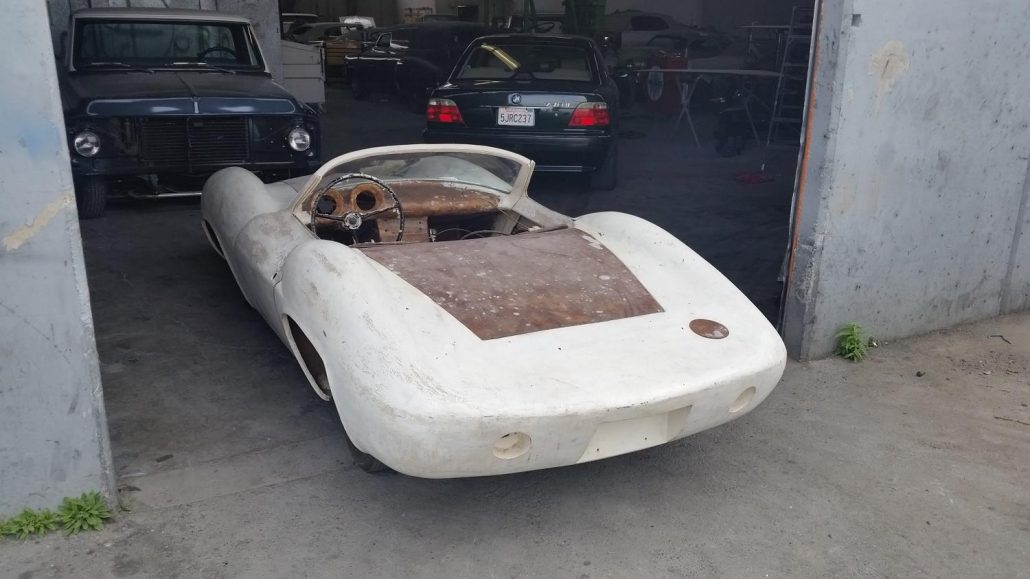 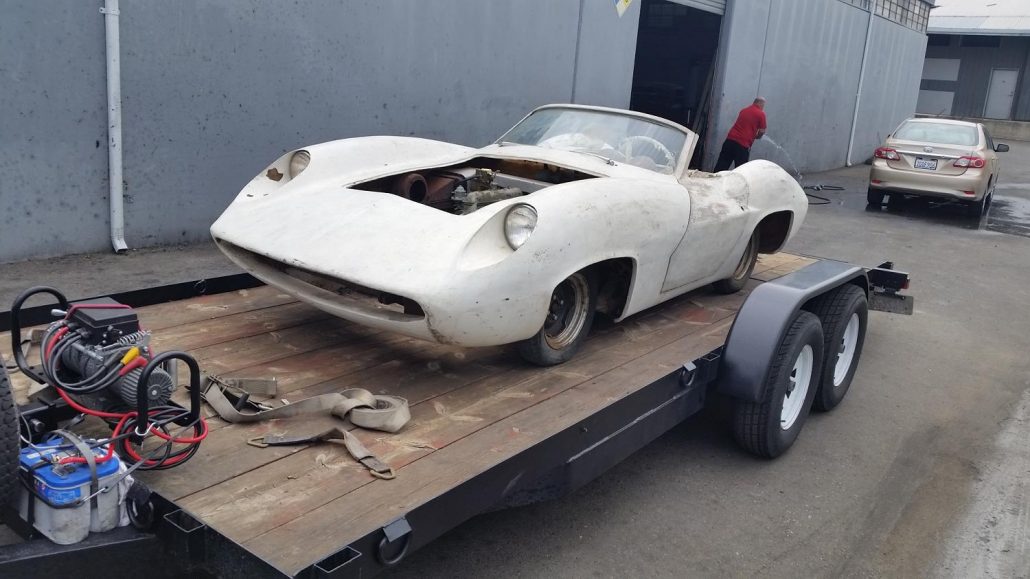 But this car was small – built on a Crosley chassis or using components of it.  How small you ask?  Dennis Gerdes is a tall individual – 6 foot 6 at least.  Check out the photo of Dennis in the car after he loaded it on his trailer. 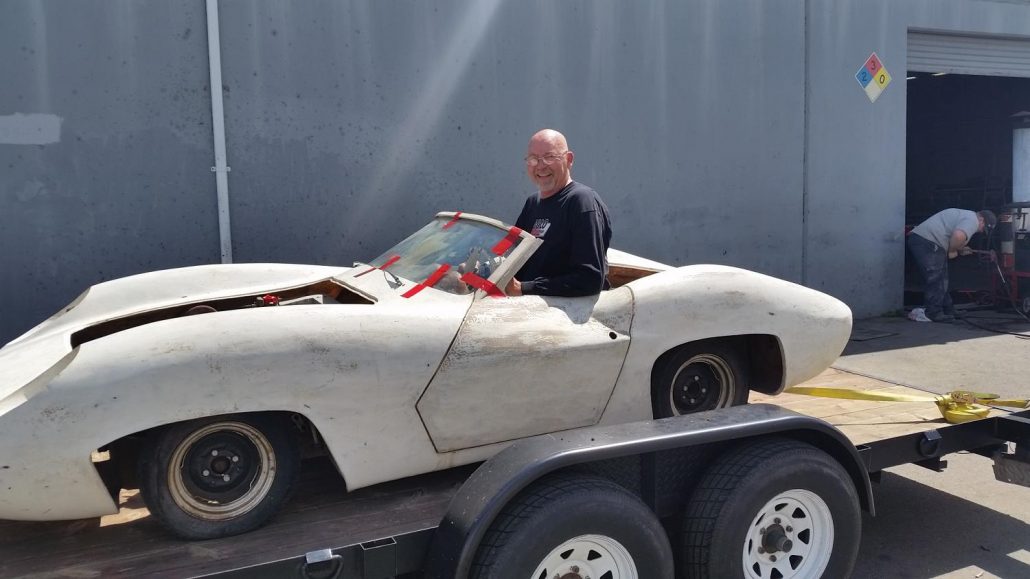 Dennis has been a friend of ours for nearly all years this century.  We met around 2006 doing research on Glasspar sports cars and have been friends ever since.  Dennis coordinates all our west coast purchases and arranged the transport of the car from Sacramento, California to his home near Los Angeles.  He would do the transport.  Then when the car was at his home, he would ready the car for shipment to Tampa, Florida.  But things don’t always go as planned.  His truck broke down on the way home.  I’ll leave it to Dennis to share any separate adventures he had on this trip after the “breakdown” in the comments area.  I think there were one or two 🙂 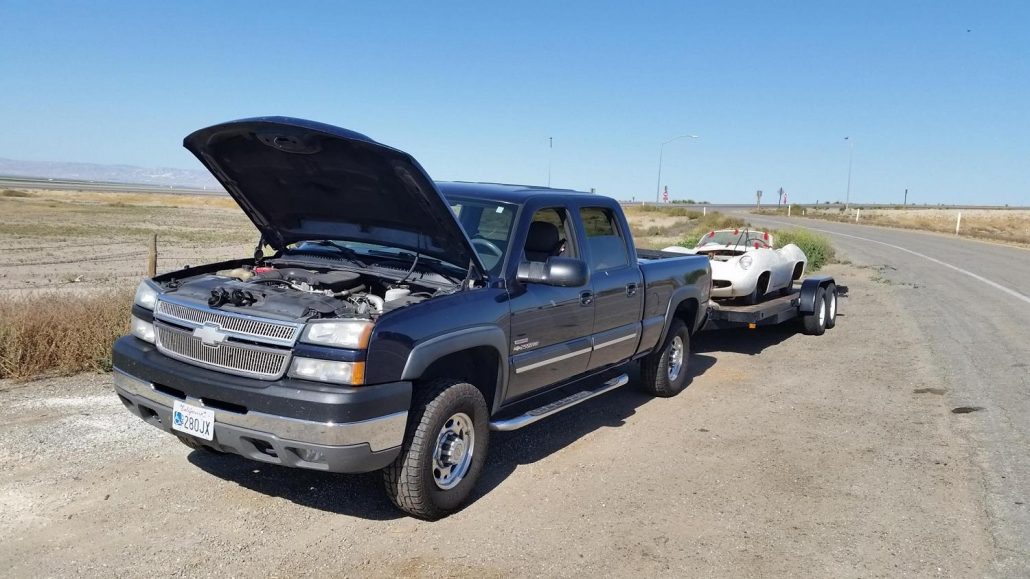 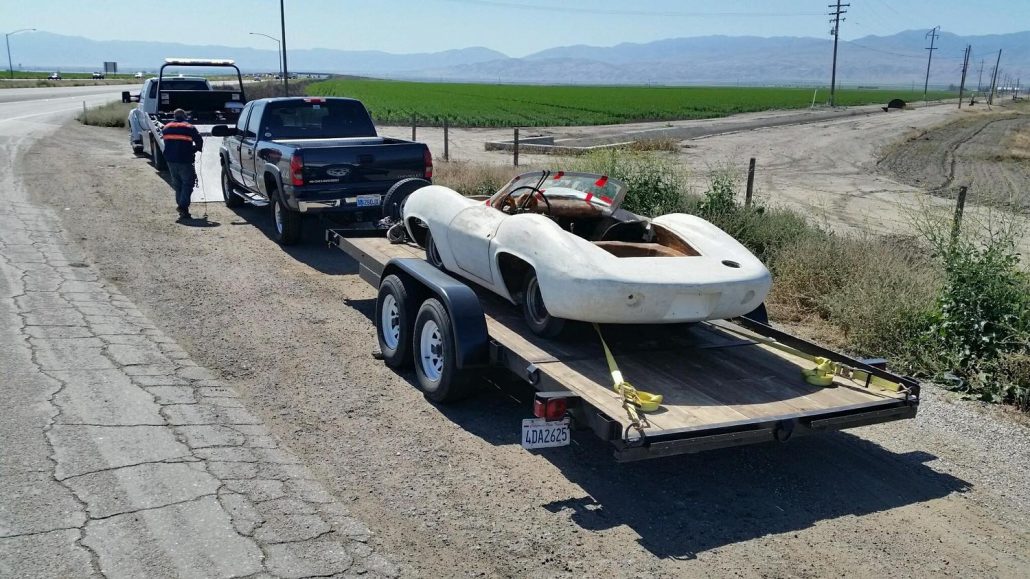 Most cars we find or that are sent to us were built using a body designed and built by a known company – and that’s smart.  The builder realized the challenge that was before them and chose to simplify the process.  It’s rare when we find a car with a unique design that was also well-built – as this sports car from Sacramento.  The body had a pleasing design and there were subtle touches that revealed themselves throughout the car.

For example, the hood lines follow the lines of the fenders, cowl and front.  Soft curves with corners radiused – not at 90 degrees.  Studying the design and execution of a one-off sports car tells us much about the skill of the person building the car – even without knowing the name or history of the build.

Let’s take a look at some photos of the car when we got it home.  In the photos below, our good friend Nate Bowne helped out to give us a better reference for a person in the car.  Nate is 6 feet tall so you can get a better idea of the size of the car – but I do get a kick out of the photo with Dennis in the car above too. 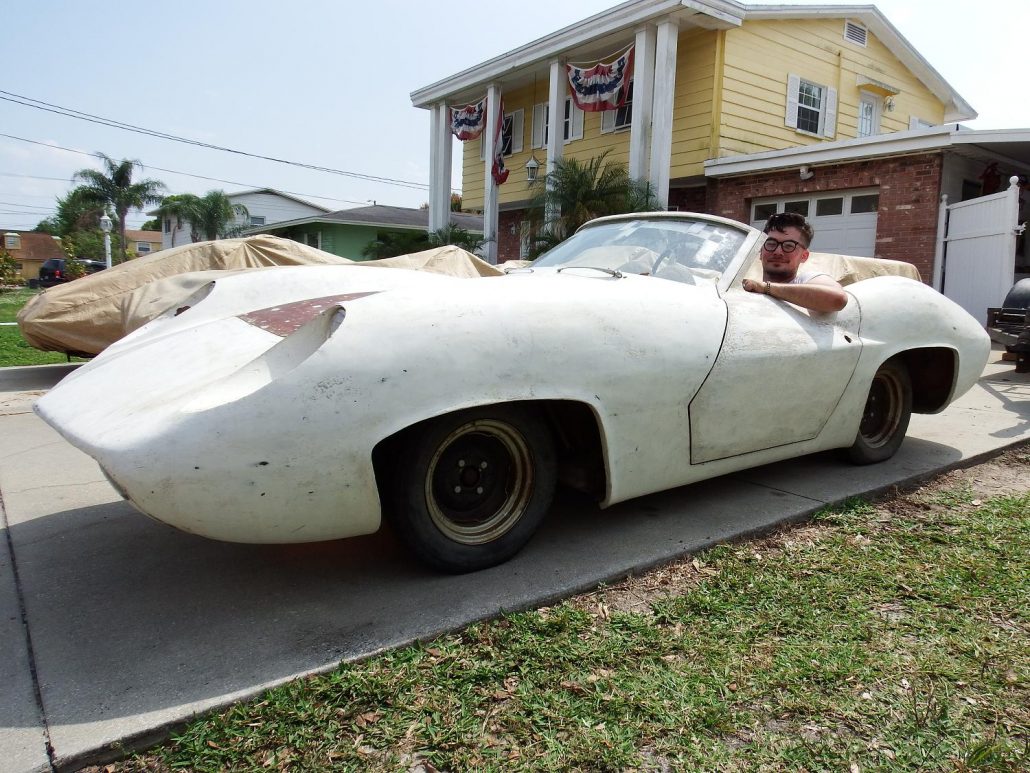 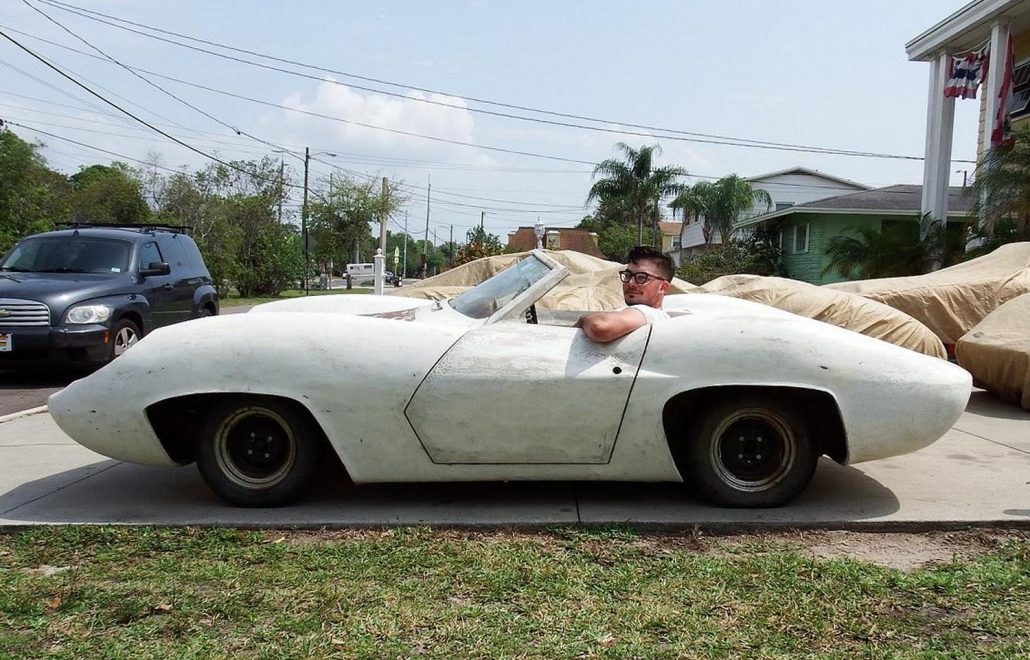 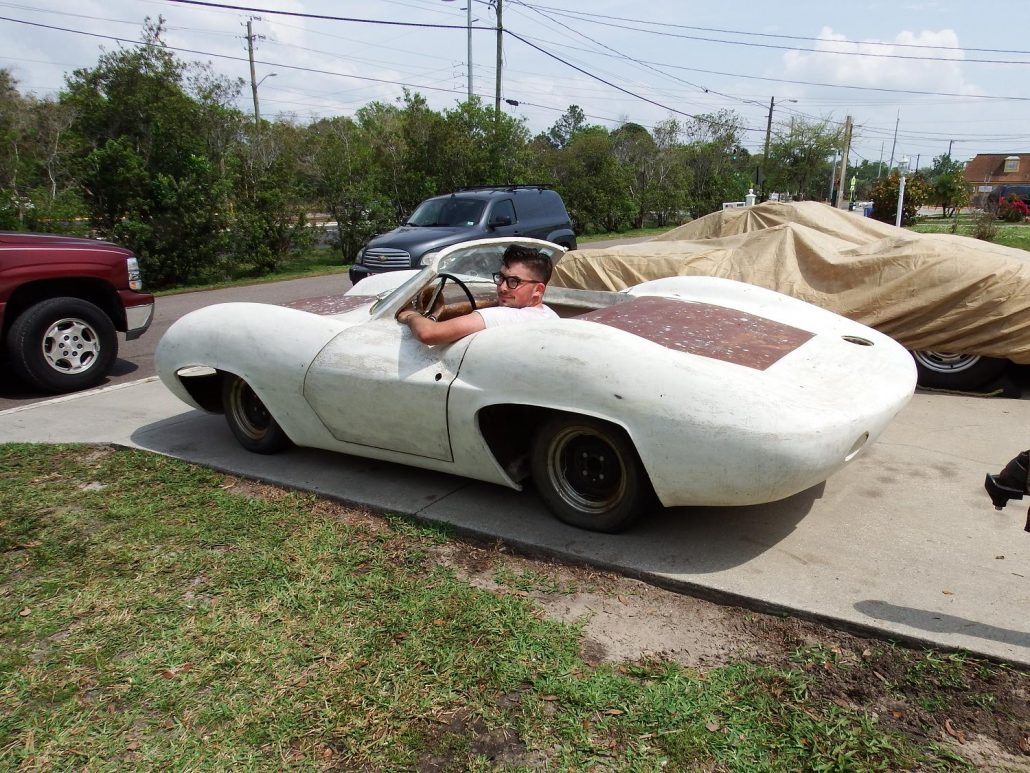 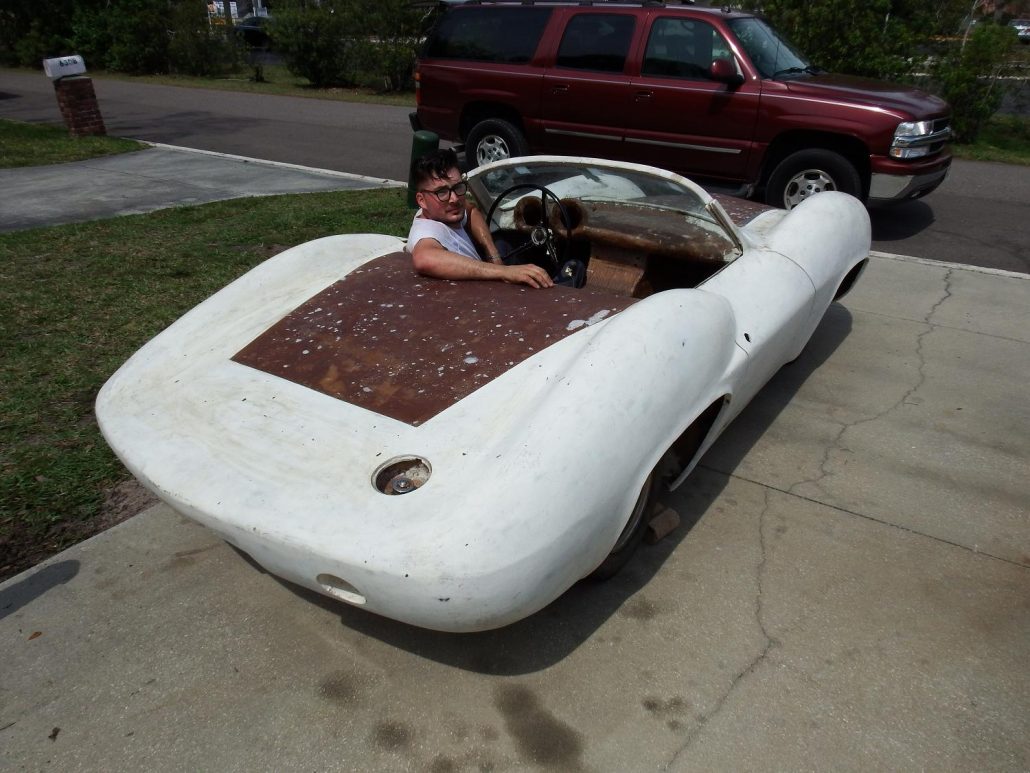 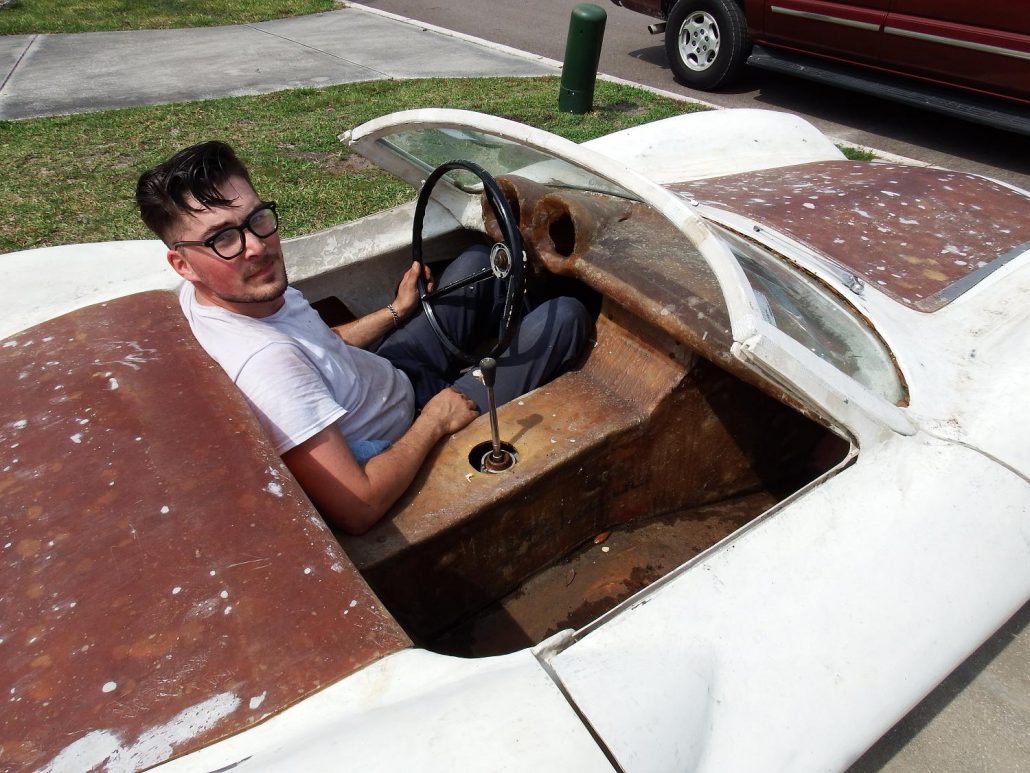 When you find a one-off sports car there is often one or two design issues that may need to be addressed to improve the appearance of the car.  Wheels and tires are one of those areas on each of the cars we own.  In this case, I experimented with a few different wheels before settling in on the wire wheels shown below.  I think it gives the car a nice look.  I included a photo of the engine below as well – a small Crosley motor and transmission. 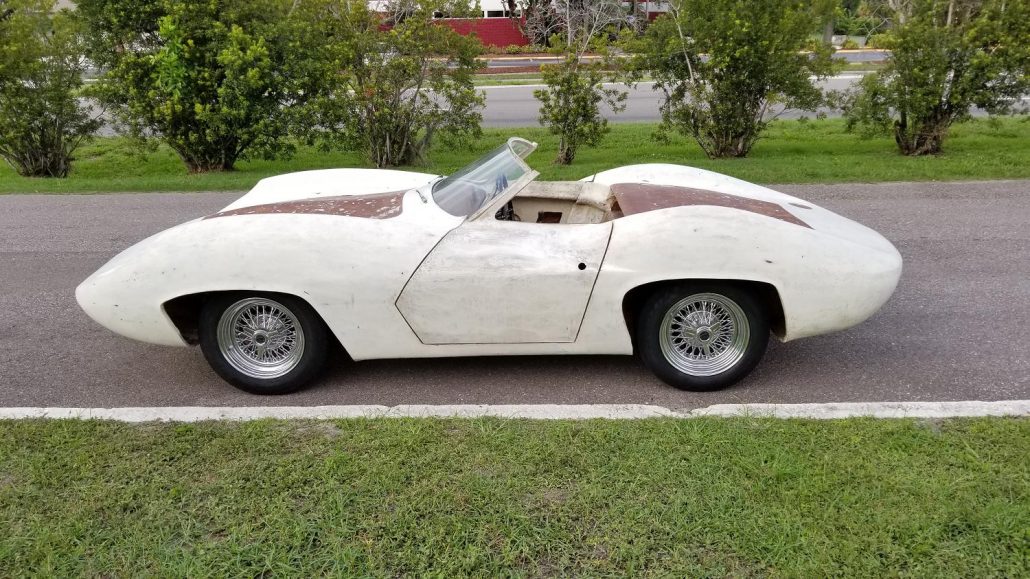 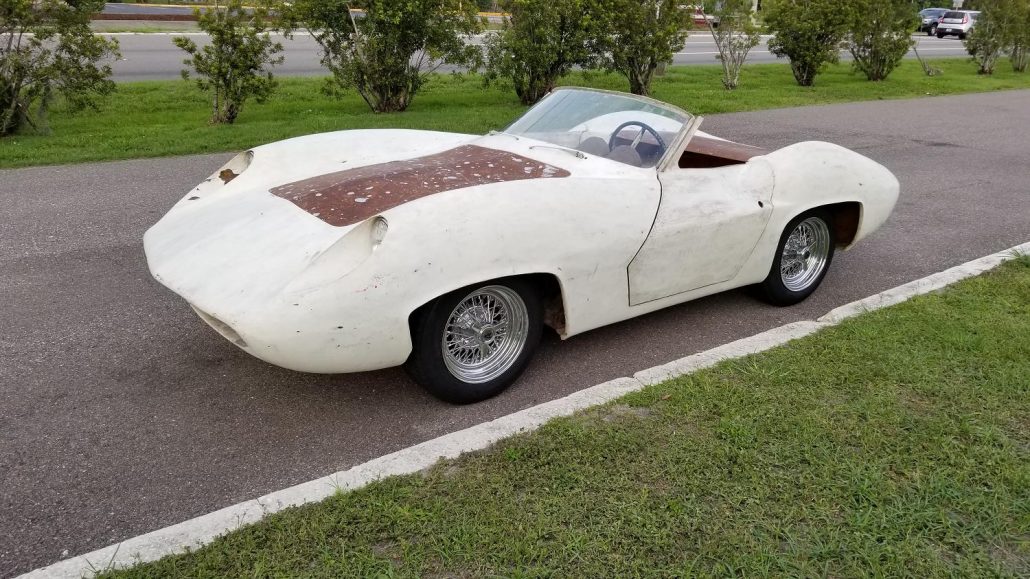 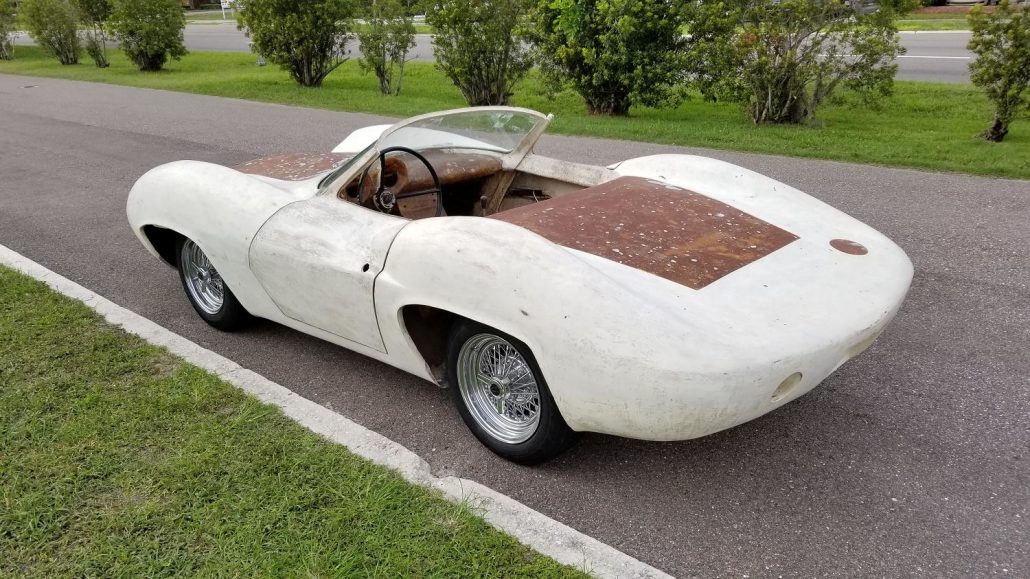 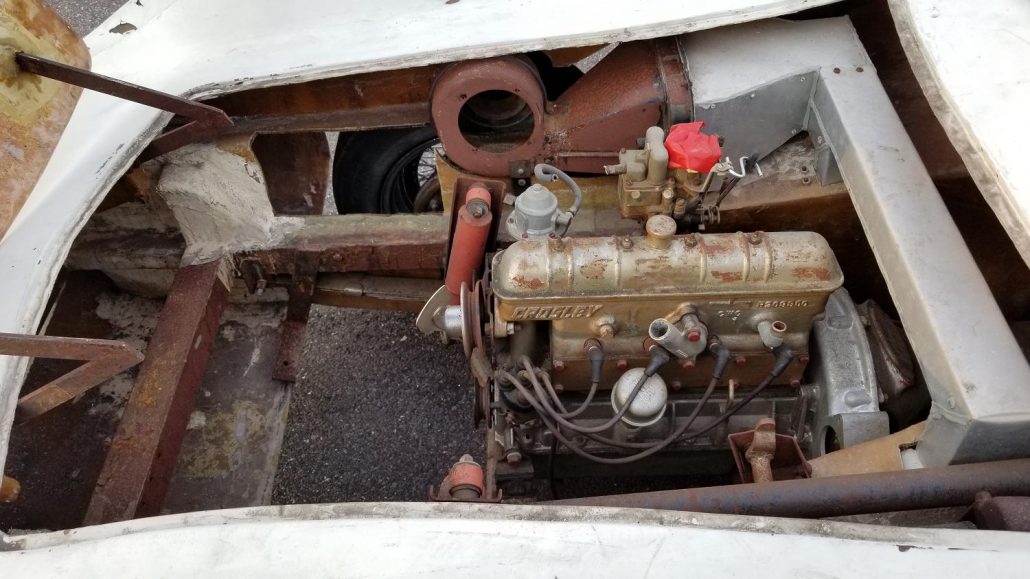 Last year the project took on a new owner – Steve Miller.  You may remember Steve’s beautifully restored LaDawri Sebring.  It was showcased in Reincarnation Magazine last October, 2019. Click here to review Steve’s LaDawri in the magazine article. The photos below show the transport of the car and Steve with the Sacramento Special.  Steve has promised to keep us in the loop on the restoration and we look forward to sharing his progress with all of you.  Go get ’em Steve 🙂 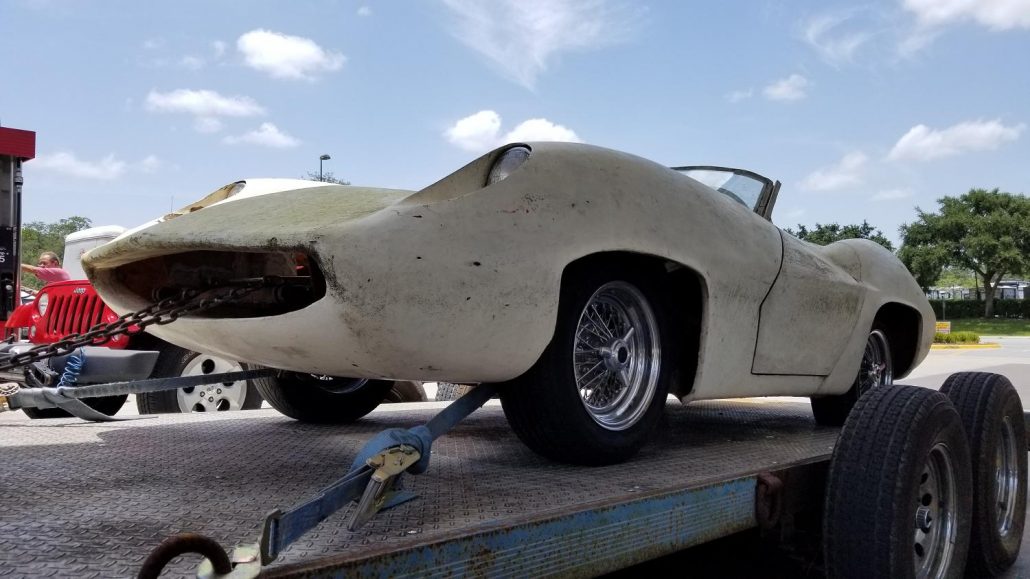 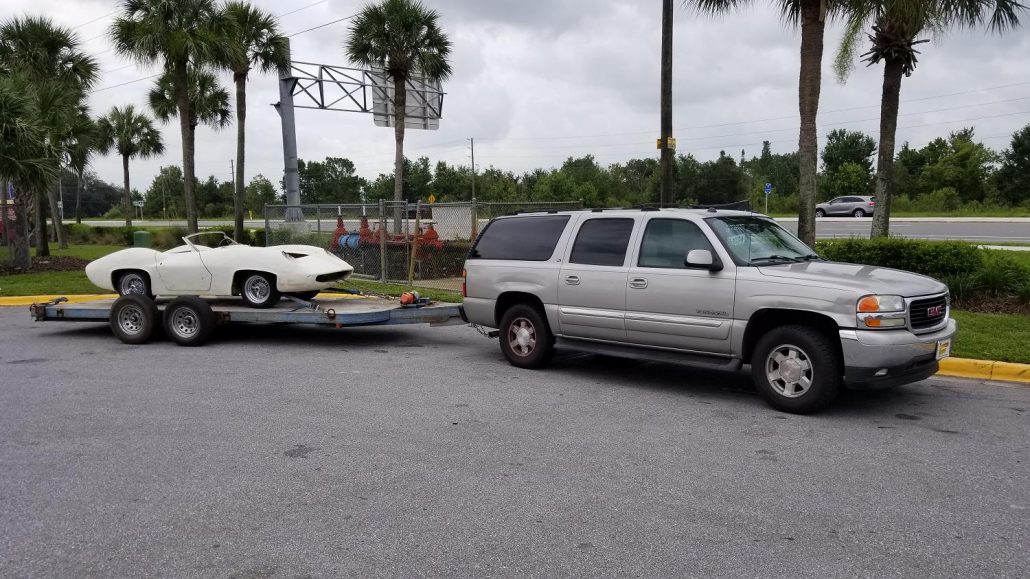 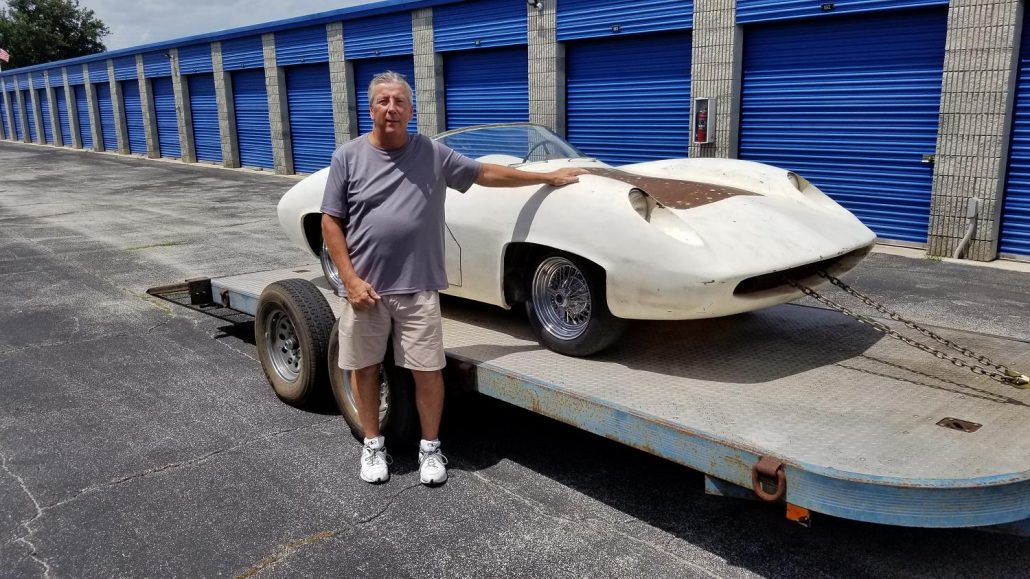 Thanks again to Dennis Gerdes for all his help in so many of these cars we save at Undiscovered Classics.  You’re the best Dennis!  And..best of luck to Steve Miller as he goes forth on his latest project.  In the meantime, any of you who live in the Sacramento, California area and may know Cameron Hampton, please let him know we would like his help in learning more about this special car and its history.  Inquiring minds – and Undiscovered Classics – would like to know 🙂