Recently I wrote about the Dr. Richards Allied Special now owned by the Kunicki family.  Click here to review the first part of this story.

Dennis Kunicki originally bought the car in April 1961 – he was just 24 years old.  His son Brandon now owns the car, and we’ll discuss that in the near future.  If you read the story via the link above, you know how excited he must have been about buying and driving this Allied Falcon sports car.  I would have been ecstatic!  Having a car built at such a high level of  design – and with such a large powerplant – must have been exhilarating to drive.

So…..I e-mailed Dennis and his son Brandon requesting additional vintage pictures of the car.   I was thinking to myself…”If I owned the car back then….I would have taken a million of ‘em.”   Surely Dennis must have documented this car in every way, shape, and form.  But I keep forgetting…..digital photography today puts the camera everywhere and in the hands of everyone.  Not the situation back then.  In actuality, I’m very lucky to even find one historic picture.

Here’s what I heard from Dennis about my request for pictures of his Allied sports car:

That little 2″ x 3″ wallet picture is the only picture that I have.  For some reason I never took any more pictures of it in use, nor of my Corvettes for that matter.  I must have been too busy driving.

That’s right.  Dennis had just one picture of his car.  One that he kept in his wallet like many of us have done for years – right next to the other special “loved ones” of our family.  It tells you how he felt about his car, but not the details behind the picture.  Dennis was kind enough to “fill in the details” and put pen to paper.  In today’s article on Forgotten Fiberglass, Dennis Kunicki shares his memories of his car.

Take it away Dennis….

A few more details re the update from the second owner (Dennis was the third owner of this car).

I first saw the car at that Old Orchard Mall show (Illinois), and some time later saw it again near the Baha’i Temple in Evanston Illinois.  Dr Richards, if I remember correctly, was a dentist who worked and also lived in Evanston.  Baha’i was not near a crowded residential area so it was safe to street park it.

It originally had bumpers though I took off the front one almost immediately since it was terrible looking and didn’t go with the car’s design.  It looked better out on the street rather than on display and Richards used it as a daily driver and for horsing around with his friends that had Jaguars, Ferraris, etc, that all required a great deal of shop time.  This is the reason for the very reliable Cad engine. 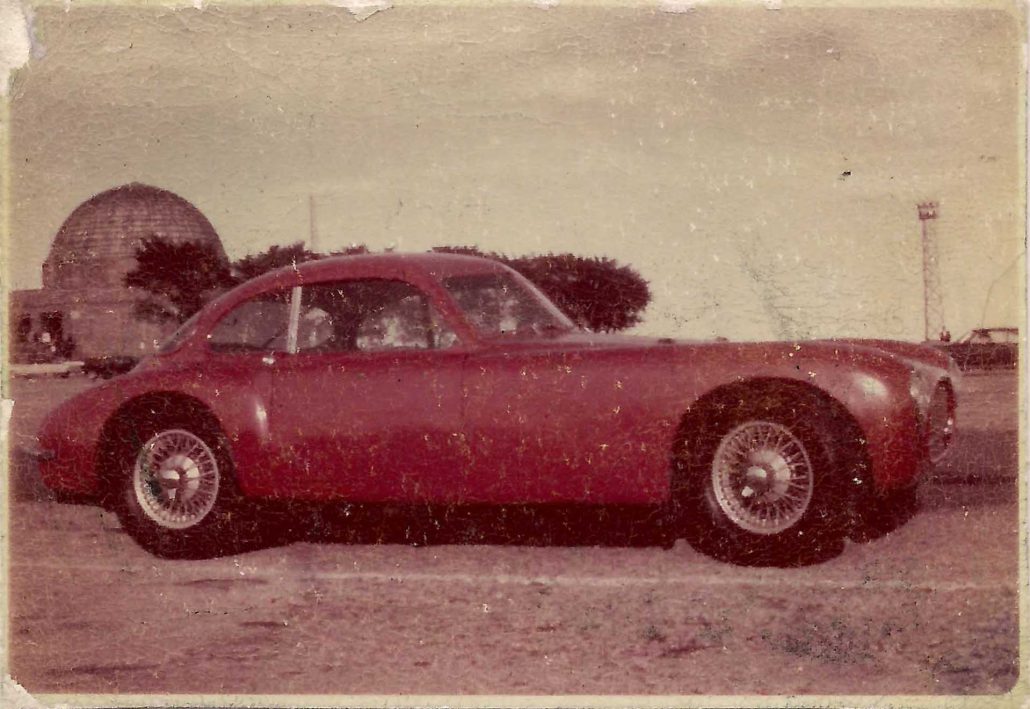 Dennis Kunicki’s Picture of His Allied Sports Car. You Can See The Adler Planetarium on Lake Michigan (Chicago) In The Background. Thanks For The Picture Dennis!

Dr Richards’ doctor advised him to stop driving completely due to heart problems, not just driving the coupe.  I found an oxygen tank in the left front fender well to give you some idea of Richards health.  Want to reinstall that, Brandon?  I think that I’ve still got it!

The doctor was responsible and soon sold the coupe to a neighbor kid for next to nothing who found the car just a little bit too much and put it up for sale and I bought it.

Originally the car didn’t have a heater or windshield air vents, I installed a Crosley heater that I had and plumbed something up to get rid of the occasional foggy windshield.  Reliability was excellent and I recall when we went out of town for a couple of weeks returning and my wife’s Corvette wouldn’t start, but the Allied coupe turned over immediately after a few seconds on the electric fuel pump.

The original Cad fuel pump was never installed by Ullrich.  Ullrich did a fantastic job putting this car together, with its low CG (center of gravity) and 2400 lbs weight it cornered like on rails.

The car had 6.70×15 Metzler radial ply tires that hung on when pushed but then would without warning instantly let go.  After they wore out I replaced them with 7.10×15 Wards Riverside tires that all of the racers were then using (Max Balchowsky”s Old Yeller, for example).

I’ve attached a rather scratchy picture from my wallet (obviously no Photoshop) of the car parked near the Adler Planetarium, I used it as a daily driver when not working two jobs and going to night school, some of the reasons for its final disuse + my garage was about 2 or 3 feet wider than the car, I could barely open the doors to get in and sometimes had to crawl through the open driver’s side window that I had left open.

The only major problems were that at speed, the front hinged hood would pop up (so I installed hood hold down straps).  Also, the engine would run completely out of steam at around 4200 max rpm due to the stock hydraulic lifters – it was a torquer.

The hood pop up resulted from that large front grille opening with no under hood pressure relief I initially thought about replacing the fiberglass hood with a louvered aluminum one, but then noticed that all the later model Cisitalias had side ports that accomplished the same thing a little bit more elegantly.

It was always a beautiful fun car

Dennis stopped driving it in 1971 and put it in storage.  However, he liked the car too much to sell it and eventually his son Brandon took over the responsibility for the car and continued with its preservation and plans for restoration – which have begun!

In the next part of this story, we’ll hear from Dennis’ son Brandon and his thoughts on the restoration of the car.  Lots to discuss here gang about a very special car, and some very special people.

Thanks to Dennis Kunicki for sharing his memories of his car, and his photo too 🙂

The only time that the coupe saw a race track was with me driving it and just tootling around Elkhart and Meadowdale Raceway which is no longer in existence.  That pop up hood precluded any real spirited high speed diving.  It was a good looking boulevard car for Richards.

The fiberglass dash was covered with red Naugahyde glued to its surface (hard as a rock, no padding) and the roof was a ghastly white with red speckles that I over painted with a flat black.  Sand a little and the original paint is still there.   The doors had rectangular red Naugahyde 1″ flat fluted portions surrounded by white Naugahyde – very garish in appearance.  Carpeting was a red wool (or some sort of then available plastic carpeting possibly nylon).

When I bought the car it had a single quad throat carb.  The Carter YHs and custom manifolds were in a box with a few linkage pieces (Rose/Heim joints, etc).  I’m not sure but suspect that Richards made the change for tuning ease.  There weren’t too many mechanics that could handle multiple carb setups.

I still remember always having to reset Paul Gillette’s 3000 Healey carbs since WH Arnolt’s (a very good foreign car dealer) mechanics really screwed them up when he got the car tuned which was on a rather regular basis.  During the winter he always replaced the car’s battery with a monster one from his boat, all those old storys about Lucas and Lucasisms had a lot of truth in them, and when he went out of town on business always asked if I could drive the car daily to keep it charged and working properly.

Those were the good old days with foreign cars – especially British ones.