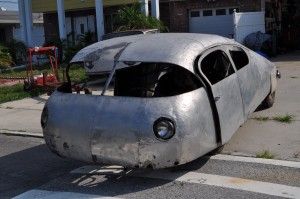 The Gougeon Streamliner Emerges From The Bowels Of Forgotten Fiberglass Headquarters.

Sometimes I don’t know what to think.  But as we started to move cars all around, I thought to myself “well…perhaps someone somewhere might get some good from all of this work we’re doing.”

You see, when I travel the country in search of fiberglass history or when I visit with car guys on the phone, time and time again I’ve been introduced to respective car guys’ wives.  Enthusiastically.  At first I thought this was very courteous, but then someone let me in on the secret.

“Geoff…” one car guy said….”if I introduce you to my wife and you tell her about yourself and what you do……she’ll finally meet someone that’s more car crazy then me.  And I can stay out of the doghouse permanently!” 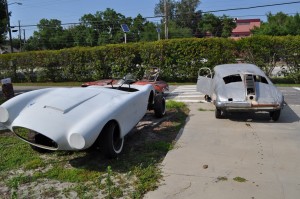 I appear to be the new benchmark for sanity – or lack thereof – when it comes for passion for these types of cars.  And in the process, I guess a byproduct has been that I’ve become a point of comparison for husbands and wives so that the “car crazy” husbands don’t appear to be so “car crazy” after all.

I’m happy to be of service.  For the betterment of the fiberglass mankind.

So let me explain why this thought has come to the top of my mind.  Today was day 1 of “moving day” here at ground zero of Forgotten Fiberglass research.  I’ve been putting this off for as long as possible, but it was time to put stuff into storage – and take stuff out to work on.

I thought it might be interesting to see “a busy day in the life of” Forgotten Fiberglass.  Of course we don’t move stuff around all the time – I try and avoid it the best I can.

But…it gave us a chance to photograph many of the cars and the different locations they are kept at.

Each year I get many visitors here in Tampa, Florida and with this story and the ones that follow, I can give you a “virtual” tour of the cars and their state of “being” as of 2011.  I hope you enjoy this story and the pictures included and will join in the joys and frustration of our “moving experience.” 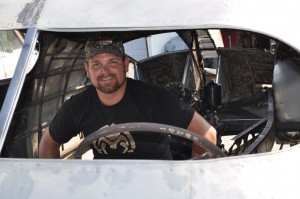 Of course none of the cars that we are going to move – run. It  would be too easy if they did!

So…to begin, we got our air compressors ready, had extra people standing by, loaded chains, winches, tools, and everything you could think of.  And started with the first of what would become four days – dedicated to playing shuffleboard with what must be the largest collection of non-running cars outside of any junkyard in North America.

Ben Emmerson is back.  He’s the “metal man” who’s an artisan with a welder and a terror with a torch.  Why would Ben be so important to me with so much fiberglass about?  Because….everything on these fiberglass sports cars was custom built.  What they should have said when these cars were sold back in the ‘50’s was:

“No assembly required – everything must be custom built using your imagination and little in terms of documentation.” 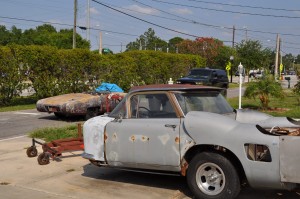 Thankfully The Cheetah Transporter Was Safely At The Side Of The Driveway. We Pushed The Chicagoan Out To The Street Where It Awaited Transportation.

This, of course, is a challenge, and what (I think) makes these cars a challenge – and fun – to build!

The “return of Ben” means that work can be renewed on the Gougeon Streamliner – one of just a handful of futuristic aluminum hand built concept cars from the prewar era that somehow escaped the WWII metal drives that ate up most of these lost concept cars.  (yes…some of the cars here are from a heritage other than fiberglass – aghast!)

Ben likes working on the car with concrete under him, so we had to move the Gougeon Streamliner out from the side of the house and into the carport.  All we had to do was get the Maverick-Cadillac chassis out of the way and kick the 1954 Chicagoan show car to curb.

We also needed to move Elwood Cauffman’s Bangert sports car.  Thank god the Cheetah Transporter (aka Moon Transporter) was out of the way and on the side of the driveway.

So….after lifting the last remaining Byers SR100 body off the Maverick-Cadillac chassis, our work began.  Down the street we pushed the Chicagoan.  Off to the side went the Bangert Manta Ray.  Onto the grass went the Maverick Cadillac chassis.  And out came the Gougeon Streamliner. 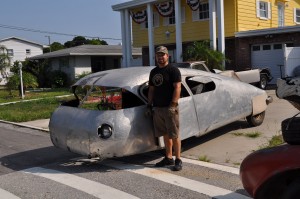 We lined up the Gougeon Streamliner with the carport and pushed it back into its new home – right ahead of the 1948 Kurtis Omohundro.  Then we pushed the Maverick Cadillac chassis to the side of the house where it was in front of the 1975 Mechanix Illustrated Urba Car, and Strother MacMinn’s 1960 LeMans Coupe.

We were nearing the half way point now, and although it was just 95 degrees at the time (and near 100% humidity here in Florida), we were holding our own and ready to go to “phase 2.”  Off to get a Victress.

I’ve been fortunate enough to rent a small garage nearby.  And then I’ve crammed it full of cars and parts.  At times, I can’t see half-way across it.   But today, we only had a few tasks to do.  We had to retrieve the Dick Foster Victress S1A Special and move my ever growing engine collection across the garage.

Ben’s about 25 years old.  I’m nearly 50.  Ben said that since I’m twice his age, I should have the strength of two men.  Boy was he disappointed. 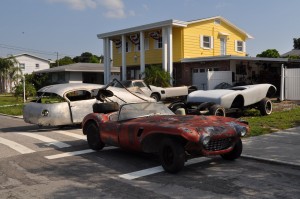 Here The Mighty Elwood Caufman Bangert Manta Ray Awaits Its “Traveling Turn.” At Least 4 Other Cars Are Shown In The Background.

Two hours later we had successfully retrieved the first Victress from the garage and had relocated most of the engines in a newly created “spot” for them up front.  We locked down the garage, loaded the Victress and sped home with just two more tasks left to do for “day 1.”  Unload the Victress and load the Chicagoan.

We did so without a hitch, Ben took off (I’m sure lucky to have Ben as a friend after this experience) and that’s all I remembered until I woke up for Day 2 – the second part of our story.

I thought this might be an interesting story to share because it will give everyone a glimpse at some of the cars we’ve saved over the years – most needing restoration – and many retrieved from near junkyard conditions.  In part 2 of the story, we’ll discuss our experience shuffling cars inside of the “Forgotten Fiber ‘Glass Menagerie.’” 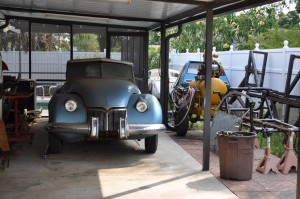 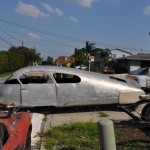 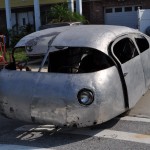 The Gougeon Streamliner Emerges From The Bowels Of FF Headquarters. 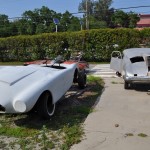 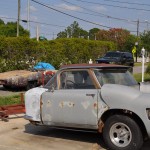 Thankfully The Cheetah Transporter Was Safely Aside The Driveway. We Pushed The Chicagoan Out To The Street Where It Awaited Transport. 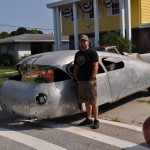 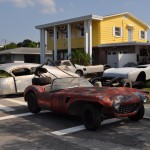 Here The Might Elwood Caufman Bangert Manta Ray Awaits It’s “Traveling Turn.” At Least 4 Other Cars Are Shown In The Background. 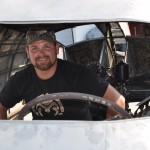 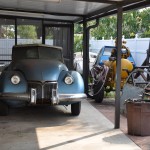 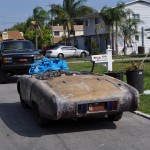 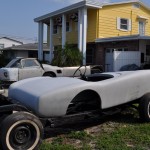 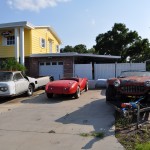 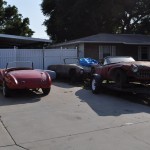 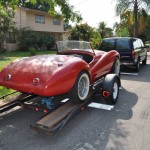 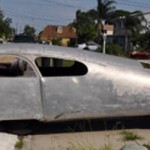