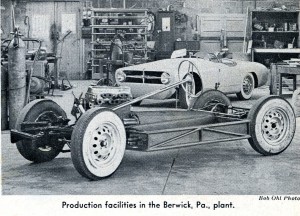 How Many Multiplex Cars Were Made? A Completed One And A “Build” Are Both Shown Here.

The automotive story of “Multiplex” is one of the most interesting stories I have the honor of sharing here on Forgotten Fiberglass – and over time you’ll learn why.

“Multiplex” is an automotive company which had its roots in the “brass era” of cars, having been first designed and built in 1912.  Here’s what the Beaulie Encyclopedia of the Automobile (Volume 2, M-Z) had to say:

The Multiplex was a large high-quality car powered by a 50 horsepower 4 cylinder Waukesha engine, and offered in three body styles on a 134 inch wheelbase, tourer, roadster, and raceabout.  Prices were $3125 to $3600.  A lighter and more sporting car on an 85 inch wheelbase was planned, but the company failed before it could be made.  Only 14 Multiplexes were made.

But that wasn’t the end of Multiplex.

Their parent company, Crispin Valve of Berwick, Pennsylvania brought forth the Multiplex name again in 1953, and today’s story is about this car – the Multiplex 186.  The 1953 version was designed and built by Fritz Bingaman, it utilized a custom-built tubular chassis with double A-arm front suspension, and had a Singer 1500cc engine as its powerplant.  Yes – another “Singer Special” emerges from history – Peter McKercher and Phillip Avis, Singer historians, will be mighty proud 🙂

So why this commotion about a great car, but one that is built of aluminum?  Well…as you read the story below those of you who consider themselves “forgotten fiberglass aficionados” will no doubt recognize why.  And, if the answer doesn’t reveal itself as you read – don’t worry – I’ll reveal the reasons at the end of the story. 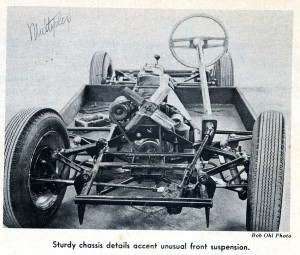 A homely, pale blue car made an auspicious competitive debut at the Floyd Bennett sport car races in New York last September.  Getting off slowly in the LeMans type start, it worked its way through the field of the finest 1,500 cc (91 cubic inch) cars in the East and, by the 40th lap, was led only by an OSCA and the potent Bandini of Jim Pauley.  Trailing were Porsches, MG Specials, and two Siata V8’s, one of which the newcomer had lapped.

Plans are underway to enter this newly designed car in other competitive events and Henry Fanelli, an experienced sport car driver who piloted the Multiplex at Floyd Bennett, claims it is the finest handling car he has driven.

That Multiplex had a rather crude, handformed aluminum body on an original design chassis fitted with a stock 1,497 cc, Singer engine.  This powerplant, which was held under 4800 rpm in fourth gear, maintained an average speed of slightly under 71 mph for the approximate 100 miles it covered.

After the mishap, another wheel was installed and the Multiplex was driven 165 miles through the New York City traffic to the factory at Berwick, Pa.  This performance could be envied, for the competitive temperament of the Multiplex appears to be matched by its gentle town and country handling. 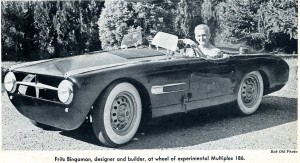 The Multiplex 186 is the brainchild of ‘Fritz’ Bingaman, longtime enthusiast of sport cars and former stock car and dirt track driver.  One of this country’s top machine designers, who has spent years in the heavy industry fields, Bingaman has forsaken all other work to concentrate on the development of an aggressive American sport car in the 1,500 cc class.

Chassis layout and suspension were his basic considerations and the body was designed afterward to functionally enclose the real machine hidden underneath.  Bingaman has developed a vehicle designed for roadability and handling qualities, rather than dreaming up a futuristic custom creation and then engineering the needed members underneath the skin.

He has aimed at that segment of the sport car field which is currently represented on the American scene only by adaptations of Detroit Iron and the now defunct Crosley.  According to Bingaman, the level of U.S. sport car competition has reached the point where a limited-production, American-built automobile in the 1,500 cc category should find a market if it is designed in the true sport car tradition and has proved it has the guts to match imported equivalents.

Consequently, he found that the Multiplex Manufacturing Company of Berwick, Penna., had the facilities to construct such a car, and is ready to offer limited production of such a model when such action should be warranted.  With the support of Ben and Fred Crispin of the 50-year old concern, the original model was evolved but not without many labor pains.

This first car, subjected to much testing and road work, was the one raced at Floyd Bennett.  Its exceptionally rigid tubular truss type chassis carries a front suspension which, although composed of normal components of ‘A’ frames and leaf springs, is unusual in that the arrangement is a departure from usual Detroit geometry. 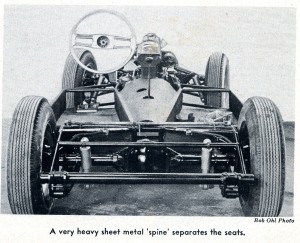 The individual suspension layout, which makes use of Monroe tubular 50/50 shocks, is such that the track doesn’t change and the wheels remain vertical at all times.  The soundness of the theory is proven by the fact that after thousands of miles of testing and racing, the 5.90-15 Goodyear tires show very little wear, and roadability and handling are superb.

A wheelbase of 85 inches uses a front track of 46 inches and rear of 45 3/8 inches.  Total chassis weight with the Singer engine is 980 pounds.  The center of gravity is 1 3/4 inches above the centerline of the wheels, with a minimum ground clearance of 5 1/2 inches.

The steering was reworked from a standard Ross box giving two turns lock to lock.  A Borg-Warner rear end and transmission also are standard.  This original car with aluminum body scaled 1,925 pounds wet, with weight distribution divided at 52% front, 48% rear.

From the first test run the design proved not only feasible, but practical and promising.  With any newly designed vehicle, trouble spots are to be expected and the Multiplex developed a major problem when power plants were considered.  At first, to stay within the American market, a modified air cooled Harley-Davidson 74 Twin was fitted.

The coupe, which weighs 1,705 pounds, is fitted with quality appointments.  Styling resembles the Cisitalia done by Farina.  Price, with a delivery date of approximately one month after placing an order, is in the $4,000 bracket.  This model, Bingaman says, will have a top speed of 126 mph.  No price has been set on the roadster and the Multiplex company is considering selling the bare chassis, since any engine can be fitted. 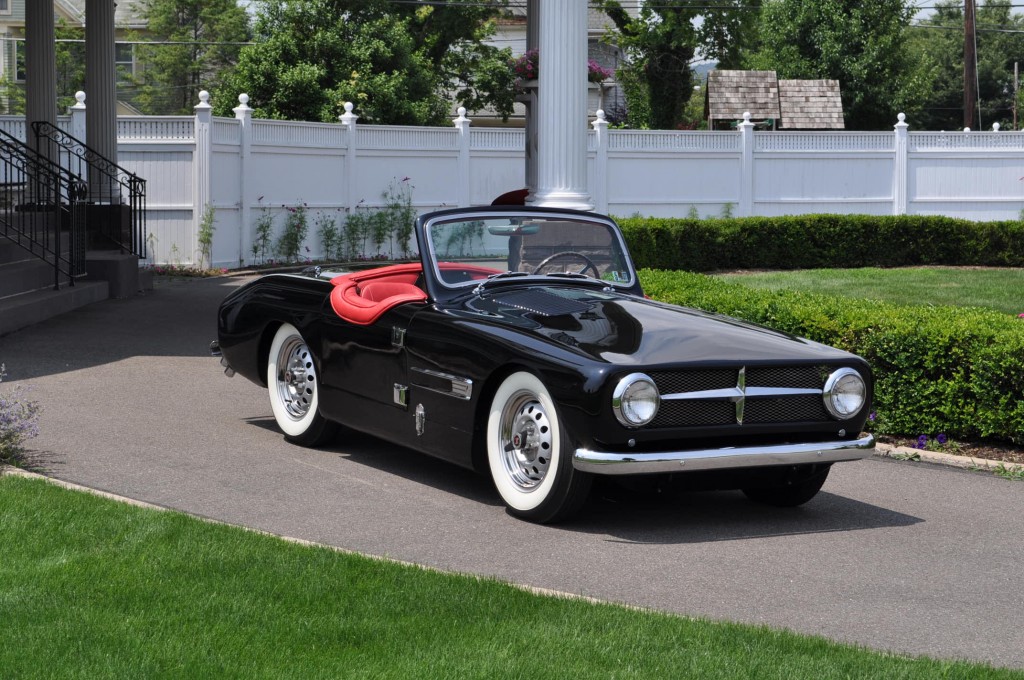 I take exception with the first two words of the story that appeared in Car Life magazine above – it is stylish and nicely done for the time – and any era.   I think the design of this car illustrates the marriage of purpose and design – on an American platform.  A remarkable achievement for any small coachbuilding company in America at the time.  Kudos to Multiplex and Crispin Valve for having the courage and tenacity to bring this gem to bear – and market too.

The Multiplex name was carried forward by their parent company, Crispin Valve, which began business in 1906 – they are still in operation today.  And… as you may have noticed as you read the story above, mention was made of the forthcoming “Coupe” which resembled a Cisitalia.  The resemblance was for good reason – the body was an Allied Swallow with 94” wheelbase.  Yet another purpose-built sports car using an expertly made fiberglass body by a small but competent Southern California company (Bill Burke, et. al).

What about the story of the Atlas fiberglass bodied Multiplex 186 coupe?  That will be covered in a future story here at Forgotten Fiberglass 🙂 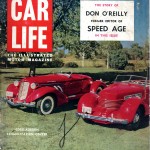 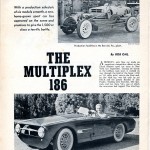 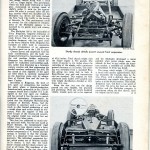 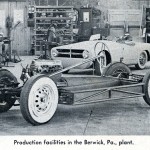 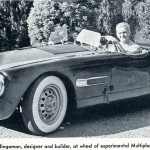 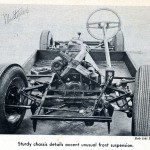 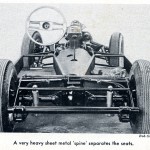 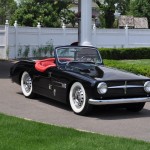 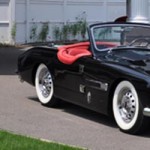