He had sold his share of the “Dick Jones Meteor SR-1” rights to Dick Jones back in 1954, and began his re-design of what would become the Byers SR-100 in 1955.  One of the first bodies had been sold to Dr. William Fort who built his Byers Sports Car to such a high level that it debuted on the front cover of Road & Track Magazine in February 1957.  Click here to read more about that story.

Things just kept looking up for Jim Byers in every way.  So, I’m sure he thought to himself in ‘57 that it must have been time to release a brochure – surely people would be calling.  And they did.  Today’s story focuses on the first brochure released by Jim Byers in early 1957 when his company was still called “Fiber-Craft“- a name he would soon change to J.E. Byers Fiberglass Company.

On this brochure and envelope, the name of the company is shown as “Fiber-Craft” and the proprietor is shown as J. E. Byers on 118 Sheldon Street, El Segundo California.  This is the first address Jim worked and lived at.  Within a year, he would expand to a second location about a block away at 607 E. El Segundo Blvd, El Segundo, California.

The name “Fiber-Craft” is also shown on the envelope with the same early address too.  The outside of the envelope has the words “Fiberglas Sport Car Bodies” emblazoned on it.  If we could only go back to this time and era…what fun that would be 🙂

You’ll notice that only 1 finished car is shown on the cover of the brochure, and this is Dr. William Fort’s Byers SR-100.  This was the cover car and feature article of Road & Track Magazine in February 1957.  The CR-90 body was the second creation of Jim Byers, and a finished car had not yet been completed by the time the brochure went to print.  We know this from Frank Tift – Jim Byers first employee who confirmed  that when he joined Byers in late ’56, they were still working on the buck for the CR-90.  Frank remembers lots of sanding in the first few months on Sheldon Street, in El Segundo. 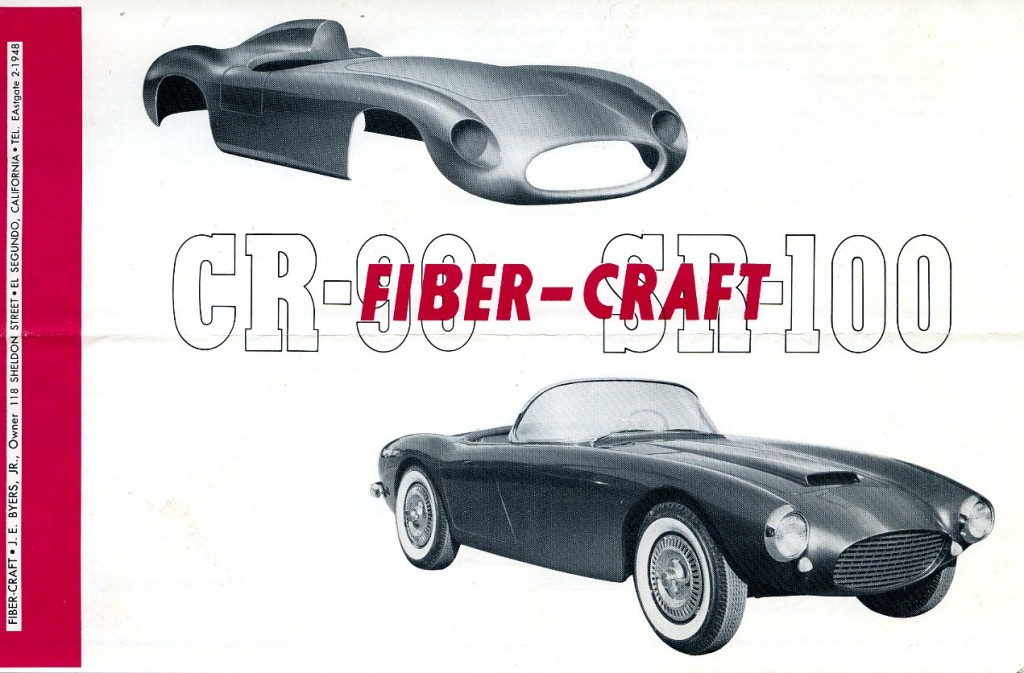 Here’s what is shown on page 2 of the brochure:

The Type SR-100 body was designed to fit a wheelbase of 100 inches and a tread of 56 inches.  It is intended primarily for the special builder” who wishes to use American passenger car components.  Obviously, the answer to building an inexpensive sports car is to use a domestic engine and chassis.  Other benefits besides low cost are accessible parts, near overwhelming performance, and handling characteristics that can match or exceed those of most European sports cars.

Since we are chiefly interested in appealing to the special builder, every effort has been made to produce a body-shell that is pleasing in appearance, yet practical.  As an example, hood, deck and door stiffeners are included with every body, with provisions for easy installation of hinges and locks.

Also, the often difficult windshield  problem has been solved by designing the body cowl to receive a Corvette windshield assembly.  This gives a finished touch which many “specials” often lack, and is surprisingly inexpensive.  Briefly, other salient features are a large engine compartment (which will accommodate any passenger car engine), a functional carburetor air intake, and return flanges around wheel and cockpit openings.

Also, the surface finish is outstanding by any standard and the body requires very little preparation prior to painting.  All this adds up to a very smart yet practical sports car body, starting as low as $395. 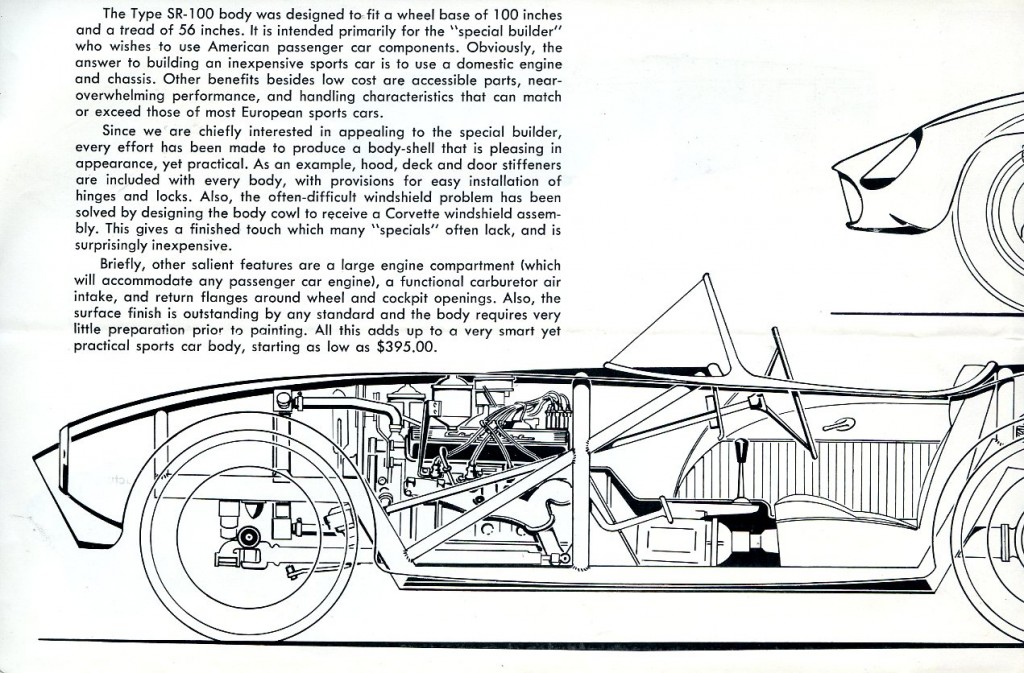 Here’s what is shown on page 3 of the brochure:

The CR-90 body is our answer to sports car enthusiasts that want competition type styling.  The “action” look.  The CR-90 was designed to fit a 90 inch wheel base and a 51 inch tread, and although rather compact, it will still accommodate almost any American passenger car engine.

A Chevrolet or Dodge V-8 is probably best suited, since these engines are comparatively light and small.  A custom frame is virtually a “must,” in order to permit a low seating position and to place the engine well back in the frame.  Fiber-Craft manufactures a light weight tubular frame designed especially for this shell which is suitable for either street or competition.

For those of you that are interested in competition, the CR-90 shell is ideal….The sturdy, lightweight body weights only 75 pounds….The faired, integral headrest is perfect for hiding that necessary roll bar.  Also, like that of the SR-100 body, the surface finish is flawless, no “waves” or “ripples” so characteristic of many fiberglass bodies.

So for distinctive styling plus quality of construction, the CR-90 is definitely the answer. 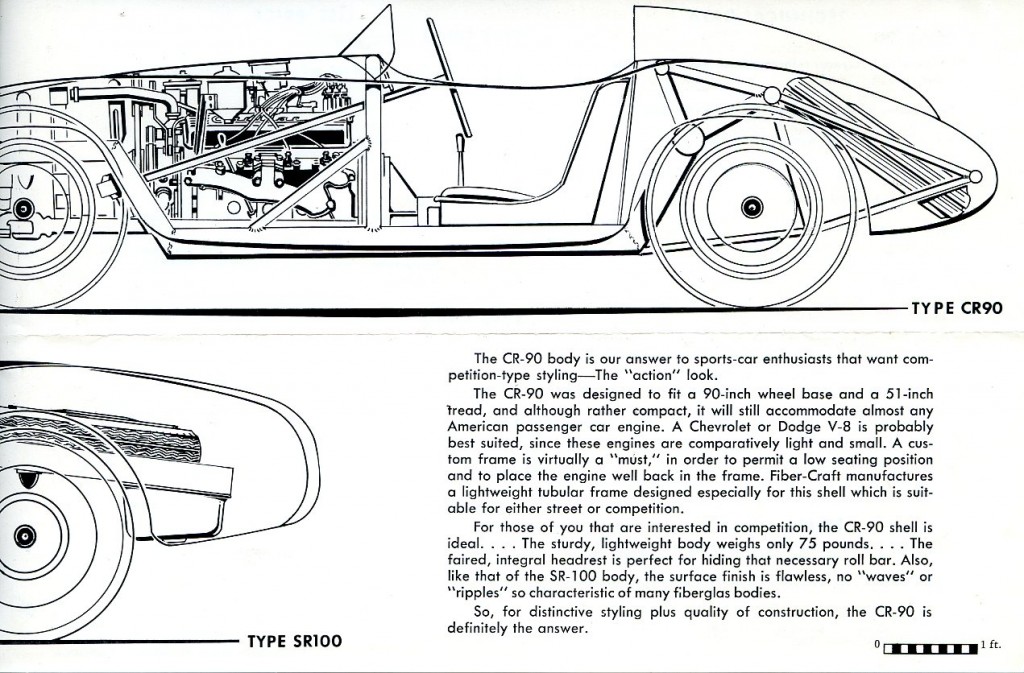 It’s interesting that on the last page of the brochure, Byers mentions “extremely ridged tubular frames with reworked Ford independent front suspension” as an option.  We’ll have to be on the lookout for anyone who might have purchased a frame with either their SR-100 or CR-90.  It’s interesting that the frame for the SR-100 was $55 more than the frame for the CR-90.  I would have thought the larger frame would have cost more money.  If only Jim were still with us to tell us “why.”  Fiberglass friend Erich Shultz did notice that the drawing in the brochure show a tubular frame, so there may be some indication of what we should be looking for if we find blueprints, a car with this type of frame, or both.  Great job Erich!

Here’s what is shown on page 4 of the brochure: 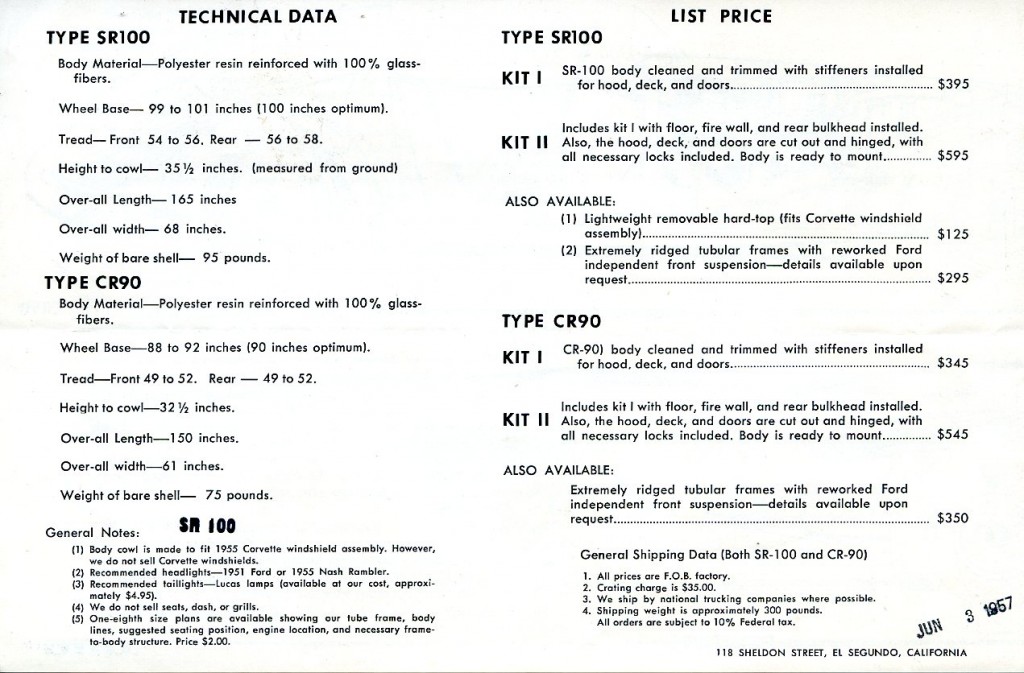 So who wants a Byers SR-100 body?  It’s just $395 according to this brochure.  I wish I could reserve “two” of these today.  Jim would release another brochure in approximately a year with both a finished SR-100 and a CR-90 on the cover.  More about this second brochure in a future story here at Forgotten Fiberglass. 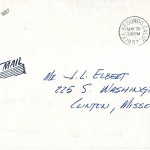 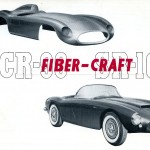 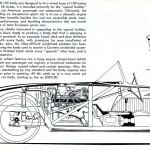 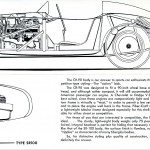 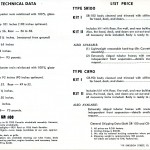 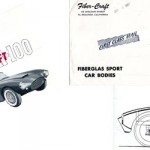