It’s with a heavy heart that I share with each of you the news of the passing of Bill Tritt of Glasspar.  He was 93 years old.  Daniel Spurr, author of “Heart of Glass” which is a book about the history of “Fiberglass Boats and the Men Who Made Them” has given his permission to reproduce excerpts of his chapter that focused on Bill Tritt.  I very much appreciate his allowing us to do so.

And now let’s review the next installment in a series of articles on the life and times of Bill Tritt. 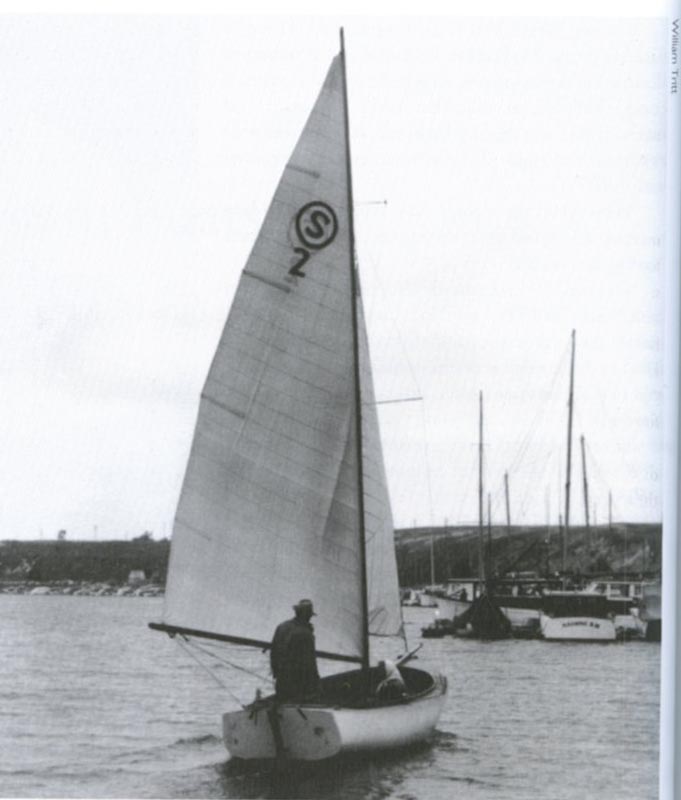 The Green Dolphin Was Tritt’s First Real Foray Into Composite Boatbuilding. At The Helm Is Otto Bayer, Tritt’s “Dour Friend and Laminating Associate.”

“When the war ended I bought, repaired, and resold a succession of boats with marginal success.  It was at this point – 1946 or 1947 – that a sailing friend asked if I would be interested in designing and helping to built a plastic sailboat that he envisioned.  My friend, John Green, had become interested in the possibility of using reinforced plastic as an alternative to the beautiful and light but fragile construction used in the Thistle and International 14.

He approached Mr. Herberts, owner of Wizard Boats, with the idea of building a 20-to 22 foot sailboat, yet to be designed.  In spite of John’s silver tongue and visible affluence, Herberts was not interested.  But while John was at Wizard, Otto Bayer, the molding foreman, overheard the conversation and tagged John in the parking lot, suggesting that he would be interested in doing the project at his home – he had a tarpaper chicken house just right for the project.

John then broached the subject of design with me; I was agreeable but not rhapsodic about the plastic angle.  The design was to be a clipper-bowed traditional double-headsail sloop belying a high-performance underbody.  We built the male mold and the first hull with no dramatic setbacks.

Having nothing to compare with the methods used in this, my first exposure to laminating, I took as a matter of course such things as cellophane stuck to the mold with axle grease as a parting agent and bees in the resin, which cured in the sun and drained from the laminate on an overcast day.  Then came the fun part of fairing the hull exterior with a disk grinder whose disk became instantly filled with only partially cured polyester.

We mixed sanding dust and bits of the dirt chicken house floor with resin for putty – a far cry from today’s cure-all Bondo.  Our secret ingredient was chicken feathers – a residual bonus, along with the invasive droppings on the floor.

Against all odds, the Green Dolphin looked good and performed quite well, but in spite of the fancy red-and-white cedar seats, and painstaking surfacing and painting, it was largely ignored in the marketplace.  We sold four, I believe.

Otto lost his job at Wizard because of his moonlighting. At this crucial moment, John Green took off on the Transpac for two weeks.  He didn’t surface for four months.  This put the Green Dolphin Company in financial jeopardy, but I sold some of my limited supply of treasures and paid the bills.

The loss of Otto’s income necessitated immediate attention, and he went fishing.  Having no one else to guide me, I made the decision to forget the Green Dolphin and came up with something simpler and cheaper.  According to a boating writer at the time, the Green Dolphin was “too much for the small boat pocketbook.”

As for Otto, he would return to work with Tritt for many years, though his disposition was truculent.  Tritt described the nature of Otto’s assistance as “unenthusiastic and vital.”

That’s the second installment of the chapter on Bill Tritt in Daniel Spurrs book titled “Heart of Glass” and with his approval, we will reproduce parts of this same chapter over the next few weeks to honor Bill’s memory.  Thanks again to Daniel Spurr for this permission.  Those of you interested in purchasing new or used copies of this book on Amazon.com, click on the link below: