What in the world is an “IMP?”

I’ve often seen mention of this car in automobile encyclopedias, but I’ve never seen one and never found literature concerning the car – until recently – in the hands of automobile historian Paul Sable.  More about that later.

Normally a small car would not be of interest to Rick D’Louhy and me because it’s not a sports car.  But….it’s made of fiberglass and its first appearance was in 1949, so it merits attention, documentation, and appreciation.

So…off we go on another fantastic fiberglass journey in search of information, history, cars, and people.  But first….what does “IMP” mean?

The IMP: A Devil of a Term

In some of the documentation I’ve found concerning the “IMP”, it makes reference to a “devil” so my vocabulary must not be up to snuff.  A quick trip to Wikipedia produced the following definition:

An IMP is a mythological being similar to a fairy or demon, frequently described in folklore and superstition.

The Imp is a “mythical” creature….which makes perfect sense to me now.  In fact, it’s the perfect name for what we’re doing on our website.

Our search for the first fiberglass production car (or fiberglass body that was produced more than once out of the same mold) has taken many twists and turns over the years, as we try and nail down the first “production” or “repeated” fiberglass bodied sports car produced.  Our search for this mythical “first fiberglass car” continues to this day, so let’s add the California designed and built “IMP” to the mix.  A “mythical” creature that perhaps we can shed a bit of light on in today’s story – and future stories too.

The first mention of the car that I’ve found appears in the April 1949 issue of Popular Mechanics.  And…it only talks about the “IMP” in the Table of Contents being on “page 135.”  When you visit this page, no mention of the IMP by name is shown, but the chassis, and the plans to build the car are clearly shown.   It’s the IMP in every way – but perhaps the initial prototype model.

Fuel bills are low in a midget car which travels 60 to 75 miles on a gallon of gas and uses only a couple of ounces of oil a week.  The open-air car has a five horsepower motor that is started with a rope.  Seating two, it scoots along at 40 miles an hour.  Two other models will be available soon.  One will have an enclosed body, battery, generator and starter and will be powered by a 7 and ½ horsepower motor.  The other will have a half body from the driver’s seat forward.

Just 3 months later, additional information appears in the Popular Science Magazine and plans for the IMP seem to have solidified. 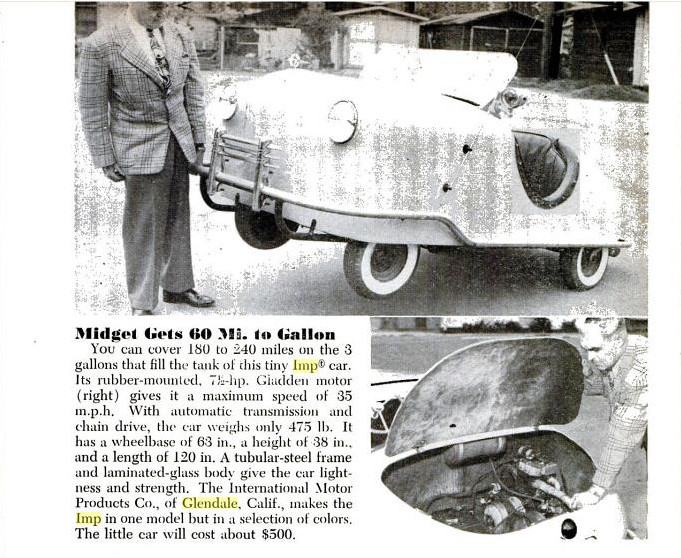 You can cover 180 to 240 miles on the 3 gallons that fill the tank of this tiny IMP car. It’s rubber-mounted 7 and ½ horsepower Gladden motor (right) gives it a maximum speed of 35 mph.  With automatic transmission and chain drive, the car weighs only 475 lbs.  It has a wheelbase of 63 inches, a height of 38 inches, and a length of 120 inches.  A tubular-steel frame and laminated glass body give the car lightness and strength.  The International Motor Products Company of Glendale, California makes the IMP in one model but in a selection of colors.  The little car will cost about $500.

So here we can see that the designer and builder of the car, R. Stanley Griffin, has reduced the models available to just one car, and it looks like this is perhaps the second prototype – and the first fiberglass bodied car.  Sales are getting close, and perhaps some were available for purchase in the late summer of 1949.

The next mention I find is one-year later and both an ad and a short write-up appear on the IMP in the July 1950 issue of Motor Trend. 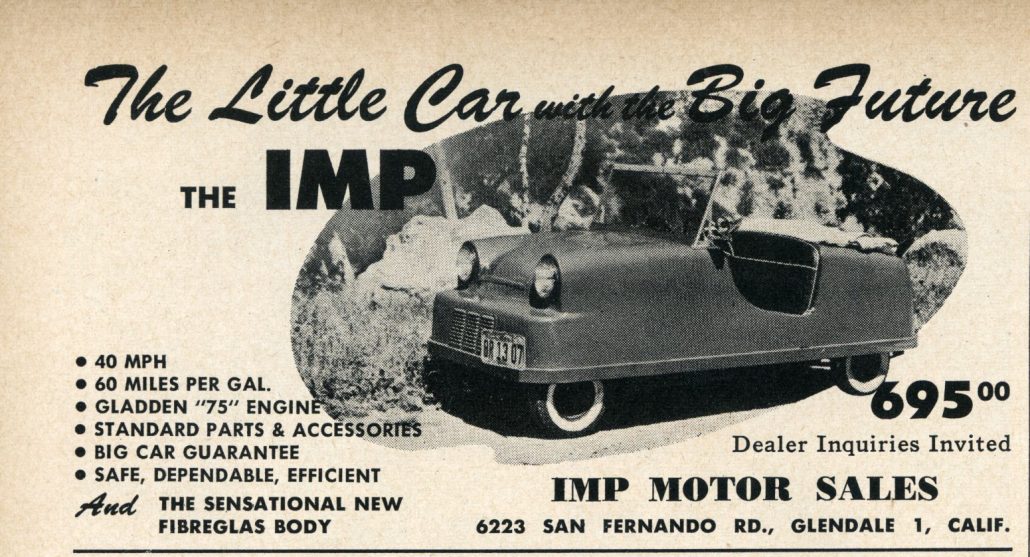 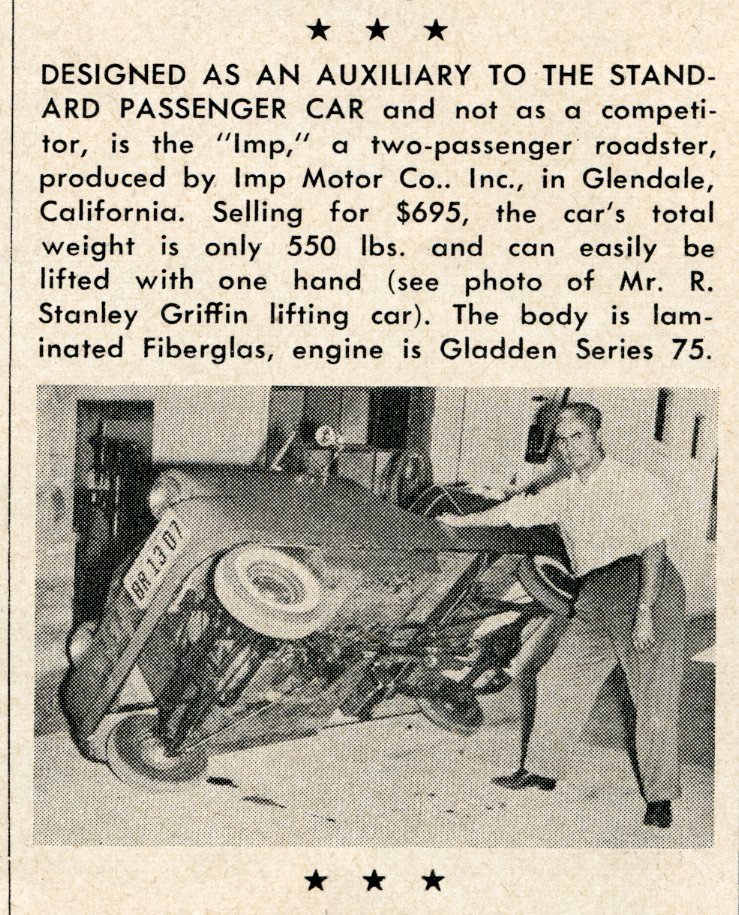 Designed as an auxiliary to the standard passenger car and not as a competitor, is the “IMP,” a two-passenger roadster, produced by IMP Motor Company, Inc., in Glendale, California.  Selling for $695, the car’s total weight is only 550 lbs and can easily be lifted with one hand (see photo of Mr. R. Stanley Griffin lifting car).  The body is laminated fiberglass, engine is Gladden Series 75.

So here one year later the price has gone up to nearly $700, but it seems like a valid concept and one that may have resulted in a few sales.  But….where are the California IMPs today?  This is one of the earliest known fiberglass bodied cars, and was just one made – or many more?  I’ve never seen a picture of one except for the articles above, and no one seems to have one in their collection of automobiles.  The “mythic” like reputation of the “IMP” seems to be more appropriate than ever.

Thanks to the research efforts of automobile historian Paul Sable, we think more than just one was made.  We’ll share why we think so in a future article. 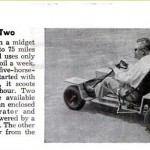 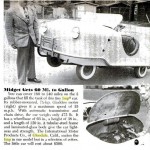 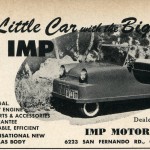 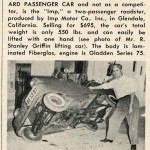 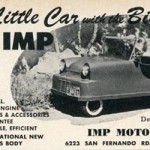